I’ll be the first to admit I am not the average theme park goer. Even before I began my current career in the Disney news industry I would regularly go to the parks by myself just to walk around and soak in the atmosphere. I’ve always been fascinated with the way themed entertainment functions, how Imagineers put their talents to work in designing the landscapes and architecture, and how the powers that be adjust operations to meet the demands of guests.

Considering this ongoing lifelong obsession with theme parks, not to mention having grown up a tremendous Star Wars fan, the arrival of Star Wars: Galaxy’s Edge at Disneyland is something I’ve anticipated with bated breath ever since its announcement. Over the past four years I’ve spent so much time initiating conversations about it with friends, family members, and coworkers, that they began joking that I would move to the fictional planet of Batuu when the land finally opened. So of course, as soon as the opportunity presented itself, I kind of did.

From May 31 up through this past Sunday, June 23, Disneyland guests needed pre-booked reservations to access Star Wars: Galaxy’s Edge for a four-hour window. Then beginning yesterday, anyone with admission to the park could gain entry to the land until it reached capacity, at which point a timed return would be issued. Naturally I decided to bypass that process entirely and show up early enough to be among the initial batch of attendees admitted into the land on its first regular operating day.

My plan was simple– enter Star Wars: Galaxy’s Edge as early as it opened (at “ropedrop,” as regulars call it) and stay until the park closed and they made everyone leave. It’s something I probably would have attempted on the actual opening day if the reservation system hadn’t been in place– though I made use of that a handful of times as well– so yesterday’s second launch seemed like the ideal alternative. I parked in the Mickey & Friends structure around 6:15 AM (sadly I was not ushered into the all-new Pixar Pals parking garage, though I admired it as I walked out) and lined up in front of Disneyland’s main entrance. The congregation waiting outside wasn’t quite as massive as I expected, but as the next half hour passed it steadily grew larger, until we were granted admission into the park and shepherded to a corral in front of the entrance to Frontierland. From there, at around 7:30 we were walked up around the Rivers of America, through New Orleans Square, and through the Critter Country entrance to Galaxy’s Edge. By 7:35 we were let loose in the land, which was open twenty-five minutes ahead of schedule.

Over the following sixteen-and-a-half hours I lived on Batuu without ever exiting back into Disneyland proper– eating, breathing, and going to the bathroom exclusively in Black Spire Outpost and its adjacent wilderness / Resistance Base area. I rode Millennium Falcon: Smugglers Run (the only ride-through attraction available so far, with a second called Star Wars: Rise of the Resistance coming later this year) a handful of times, but otherwise I wandered the streets, watched the ebb and flow of the crowd, and generally absorbed the feel of Galaxy’s Edge. The following observations represent my takeaways from this experience: Nor do I think it was ever intended to be, but spending that much consecutive time on Batuu only underscored how Galaxy’s Edge, as amazing as it is, is only ever going to be one part of a full-day experience at Disneyland. Bear in mind the same is true for every other individual land within a Disney theme park, but as it stands Galaxy’s Edge is not a radical change to that tradition. It turns out the four-hour window mapped out during the reservation period was apparently about right on the money for the casual guest, but for a superfan like myself I would say after around six hours I was ready to take a break, and likely would have had I not committed myself to this day-long stunt.

Thinking ahead, the average guest’s length-of-stay will undoubtedly increase when Rise of the Resistance opens, but at the moment we’ve got Smugglers Run, shopping, dining, Oga’s Cantina, exploration, some character interaction, and that’s about it (EDIT 6/26: it slipped my mind to mention the Star Wars Datapad function of the downloadable Play Disney Parks app, which currently does add upwards of an hour or so of content and interactivity to the land). It may take up a quarter of your single-day visit to The Happiest Place On Earth, but it won’t even come close to occupying all of it.

#2 – The in-land experience we got during the reservation period is the experience guests will get for the immediate future.

This was probably the most disappointing of any revelation I had during my visit yesterday, as I was hoping (and optimistically expecting) a more robust interactive entertainment offering during Star Wars: Galaxy’s Edge first regular operating day than was on-hand during the four-hour reservation windows. The walkaround and face characters I encountered throughout the day were the same: Rey, Chewbacca, Stormtroopers, a First Order officer, Kylo Ren, and– my personal favorite– newly created Resistance Spy Vi Moradi. Show moments were limited to Kylo’s arrival on the TIE Echelon, Chewie repairing the X-Wing, and a couple fun beats helping Vi sneak around Black Spire.

I’ll reiterate here that I think Galaxy’s Edge needs more outdoor action, more built-in narrative, and more guest involvement in the land’s live immersive storytelling. This is something I’ll keep crossing my fingers for, but now that the land is up and running I don’t expect to see any major changes content-wise until we get that second ride. #3 – The operational changes worked in helping to keep the crowds down, maybe too well.

I am more interested in overall guest experience than in attendance numbers, but as many have already noted, the crowd size right now at Star Wars: Galaxy’s Edge (and Disneyland Resort in general) is somewhat lower than we’d expected. Maybe the prospect of a busy new land is scaring tourists away, maybe overpricing and Annual Pass blockout dates are limiting the number of people who are willing to or able to show up. Who knows? I don’t mind having a pleasant trip to Disneyland without overbearing congestion, but I understand the perceived appearance of lack of interest (however inaccurate that is) isn’t the best for how the land’s reception is viewed or processed by outside observers.

I don’t really consider this a “problem” so much as it is a factor that Disney will have to adjust for as needed, whether it be by reducing the amount of blockout dates, putting together special deals or events, or finding some other way to strike a better balance between supply and demand. Rest assured it will happen as the park continues to work the bugs out of this grand theme park experiment. #4 – Lots of merchandise is still sold out.

As of yesterday, guests were unable to purchase individual Kyber Crystals at Dok-Ondar’s (though Holocrons and buildable lightsabers at Savi’s Workshop still came with them), many of the legacy lightsabers, the Sabacc deck at Toydarian Toymaker, personality chips and carrying backpacks at Droid Depot, the Rancor Teeth beer flight ceramic serving tray at Oga’s Cantina, the highly sought-after Batuuan Spira gift card, and my favorite Batuu refrigerator magnet at The Jewels of Bith, among other items due to lack of supply. 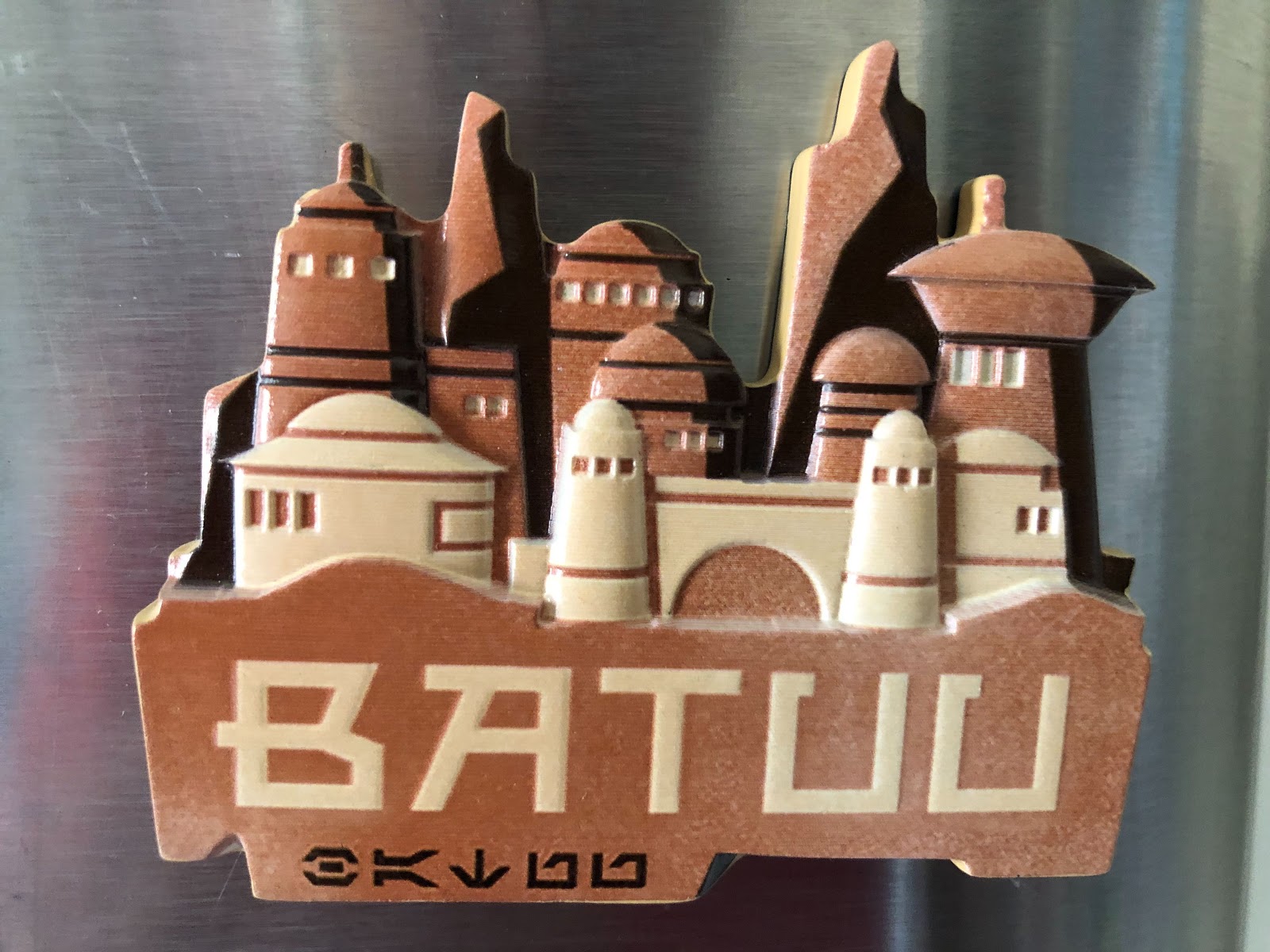 It was also jarring to see non-Galaxy’s Edge merchandise like plush Porgs, Chewbacca, and Wicket the Ewok (in the Marketplace’ Creature Stall and Toydarian Toymaker shops) being used to fill gaps where items were sold out. Hopefully this practice is only temporary until they are able to get these products back in stock. I get that this ride is a little bit more involved than your average Disneyland attraction, but one of the families I rode with yesterday didn’t bother playing along almost at all. I think the woman in the gunner’s position in front of me pressed the button maybe twice the entire time. I mean, I managed to rack up some credits getting 100% in my role as an engineer, but I’d like to see more participation up front, people!

Similarly, I don’t think the less-dedicated crowds are grasping the concept of the Falcon’s virtual-queue-lite boarding process. Instead of milling about the ship’s hold, exploring and taking photos at the Holochess board and elsewhere, folks were continuing the single-file line they come in as. Cast members were quick to dispel the misconception, but it’s odd that such a simple concept needs further explaining after first receiving those flight cards. #6 – The Smugglers Run Single Rider line is mostly not worth it, and the Extended Queue is pretty ugly.

I know the queue isn’t the main attraction, but at Disney theme parks they can be and often are nearly as impressive and entertaining as the ride itself. That’s why with Millennium Falcon: Smugglers Run, I would almost always recommend going through the Standby entrance rather than taking the Single Rider route. The latter sends you through an almost featureless hallway with one or two little chuckle-worthy details, while moving incredibly slowly and pretty much guaranteeing you a spot as the ship’s engineer. Standby vastly increases your chances of becoming a pilot or gunner, plus you get to see all the cool stuff packed into the main queue, most notably the incredibly lifelike Hondo Ohnaka audio-animatronic. 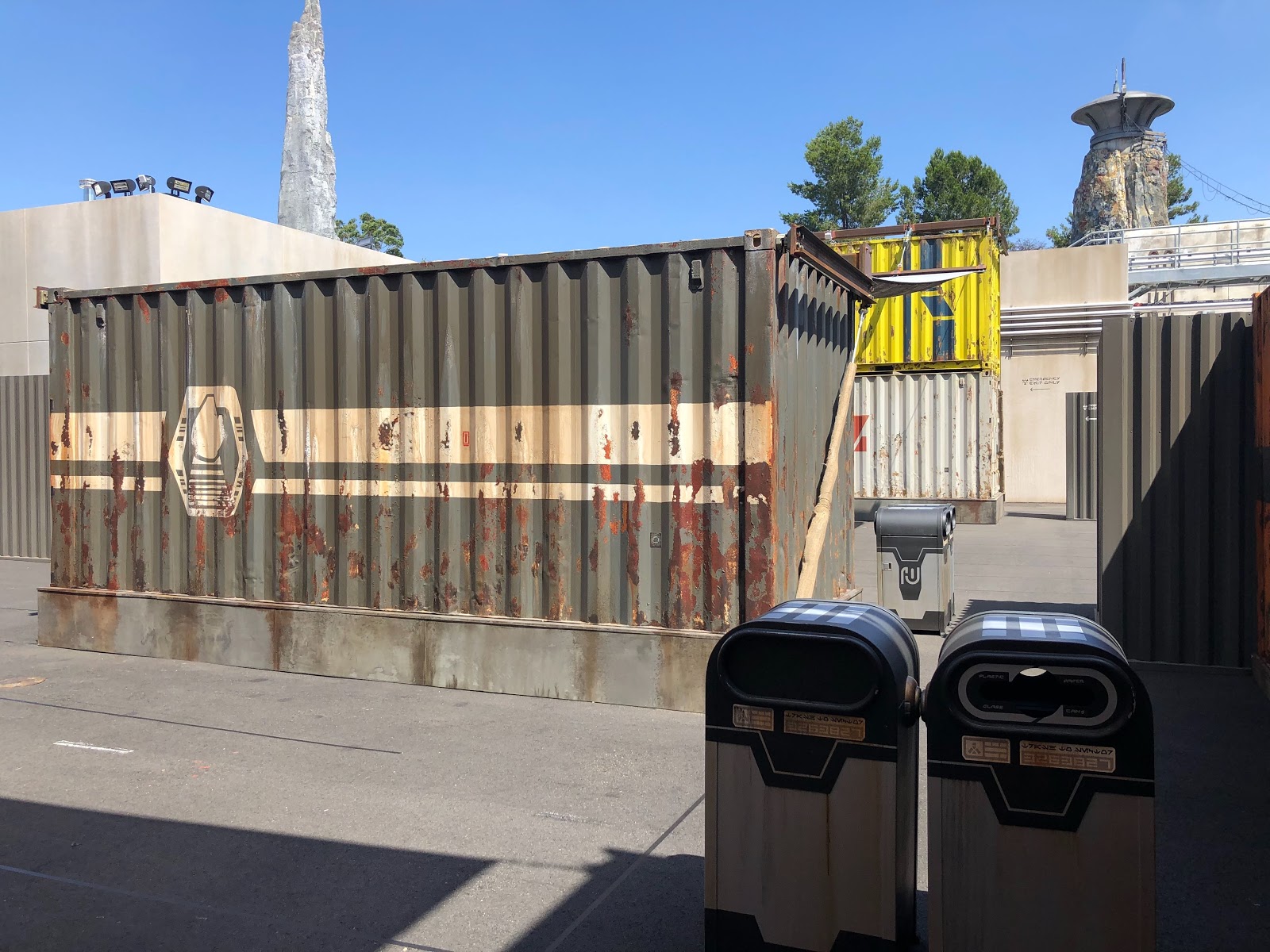 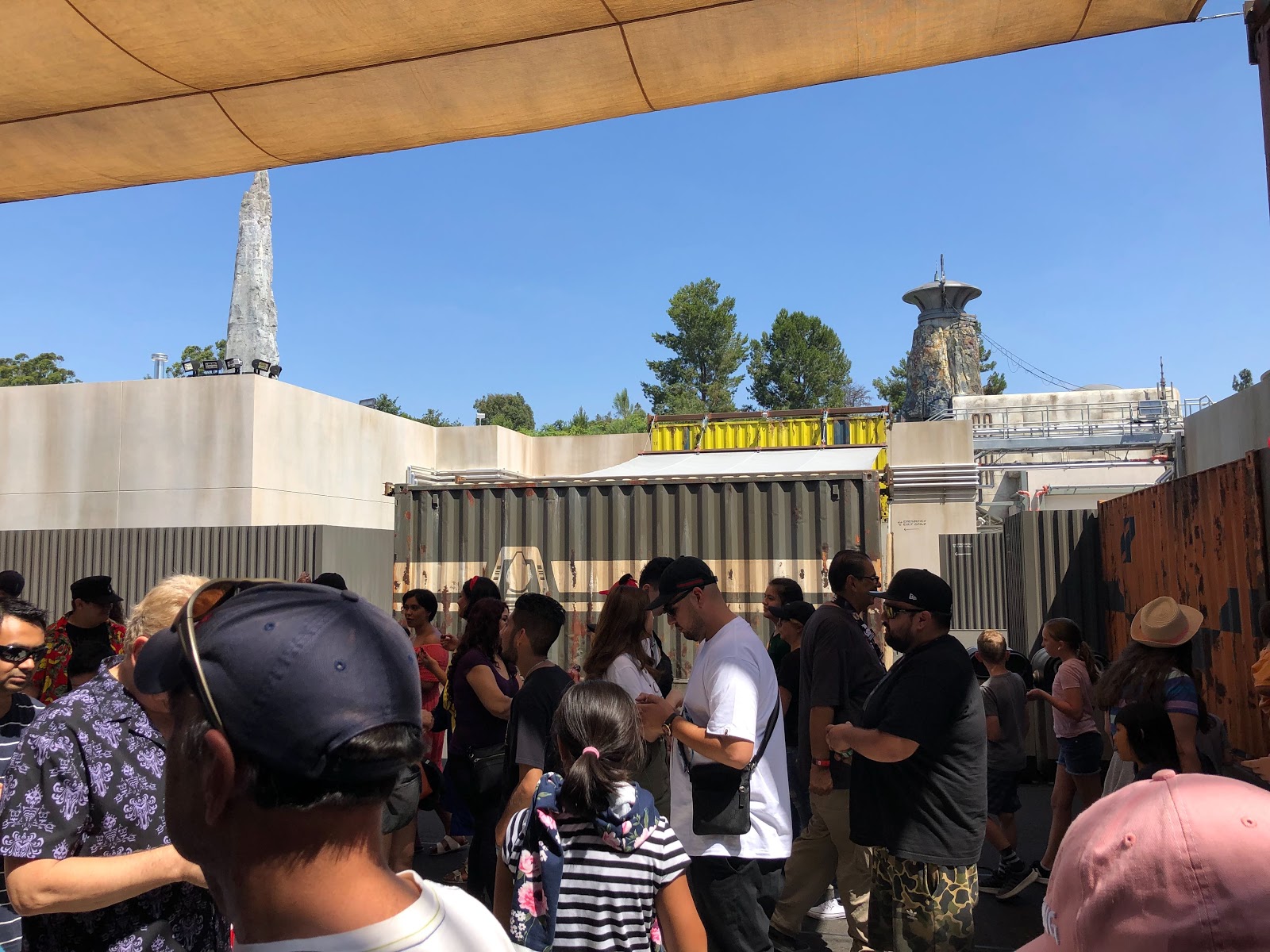 On the other hand, if the Standby wait time gets out of hand, they open the Extended Queue area, which takes you through some stacks of lightly themed shipping crates with an unfortunate view of the surrounding backstage area. Ideally, you want to board Smugglers Run when the wait is under 45 minutes, avoiding both the Single Rider and Extended Queue altogether. This may change when the land eventually starts utilizing the FastPass system, but at the moment the regular line moves swiftly enough to not make it too much of a hassle.

#7 – Chewbacca will watch the fireworks with you.

What really sells Star Wars: Galaxy’s Edge are the little moments that come from interacting with the characters present around the land. Last night I spotted Chewie watching and cheering the Disneyland Forever fireworks show (or “Oga’s celebration,” as I heard one Batuuan refer to it) from within the crowd standing in the Spaceport area. It was a perfectly charming note on which to end a very long day in Black Spire Outpost.

As my full day in the land winded down, crowds began to dwindle and I gradually lost most of my energy. I never got to the point where I was bored, as I had prepared enough to even bring the Star Wars: Galaxy’s Edge novel with me to read, but I admittedly did begin to question my own sanity in making such a commitment in the first place.

I love Star Wars: Galaxy’s Edge with all my heart, but spending an entire operating day there (over sixteen hours total) has further emphasized to me how much the land needs time to grow into itself. I have every confidence it will fulfill its enormous potential, however, and I am incredibly excited to watch Black Spire Outpost evolve over the coming months and years. I don’t know if I will ever attempt a stunt like this again at Disneyland or anywhere else, but I have no regrets about my time on Batuu.