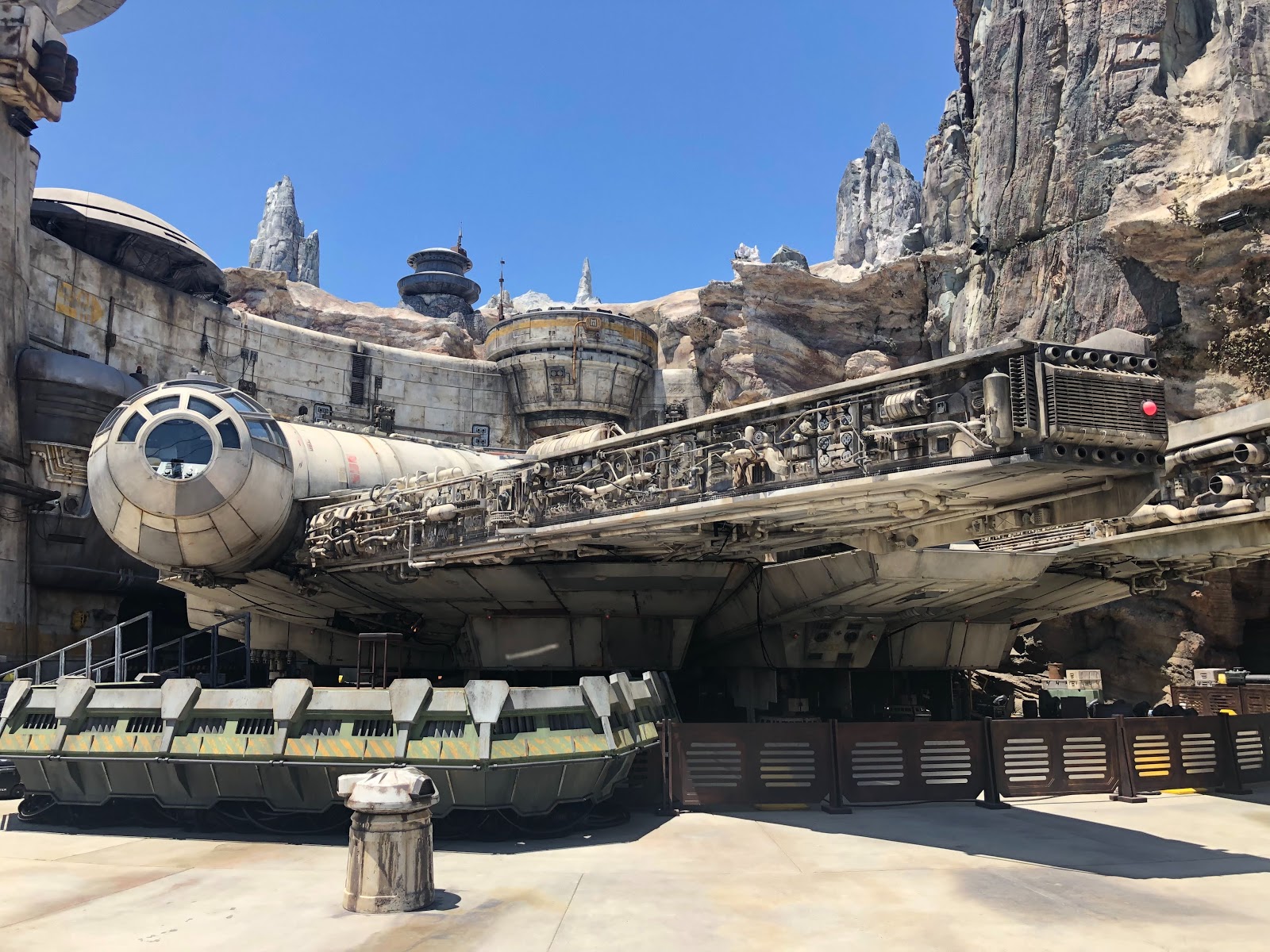 The first article I wrote for Laughing Place when I joined the team last fall was about my trip to the grand opening of Evermore, Utah’s grand experiment in immersive storytelling. Attending the far-more-high-profile launch of Star Wars: Galaxy’s Edge at Disneyland this week, I couldn’t help but feel that the Happiest Place On Earth has taken the next logical step.

In my Evermore article, I declared that the future of theme parks doesn’t require rides to deliver a transformational experience to guests, and Galaxy’s Edge is further evidence of that promise gradually coming to fruition. Sure, this new fourteen-acre land dedicated entirely to a Galaxy Far, Far Away does have one opening-day ride-through attraction (Millennium Falcon: Smugglers Run) but after spending a couple days exploring the area I don’t think it’s an exaggeration to say that the interactive flight simulator feels almost like an afterthought—a fun diversion overshadowed by the wonders that surround it. 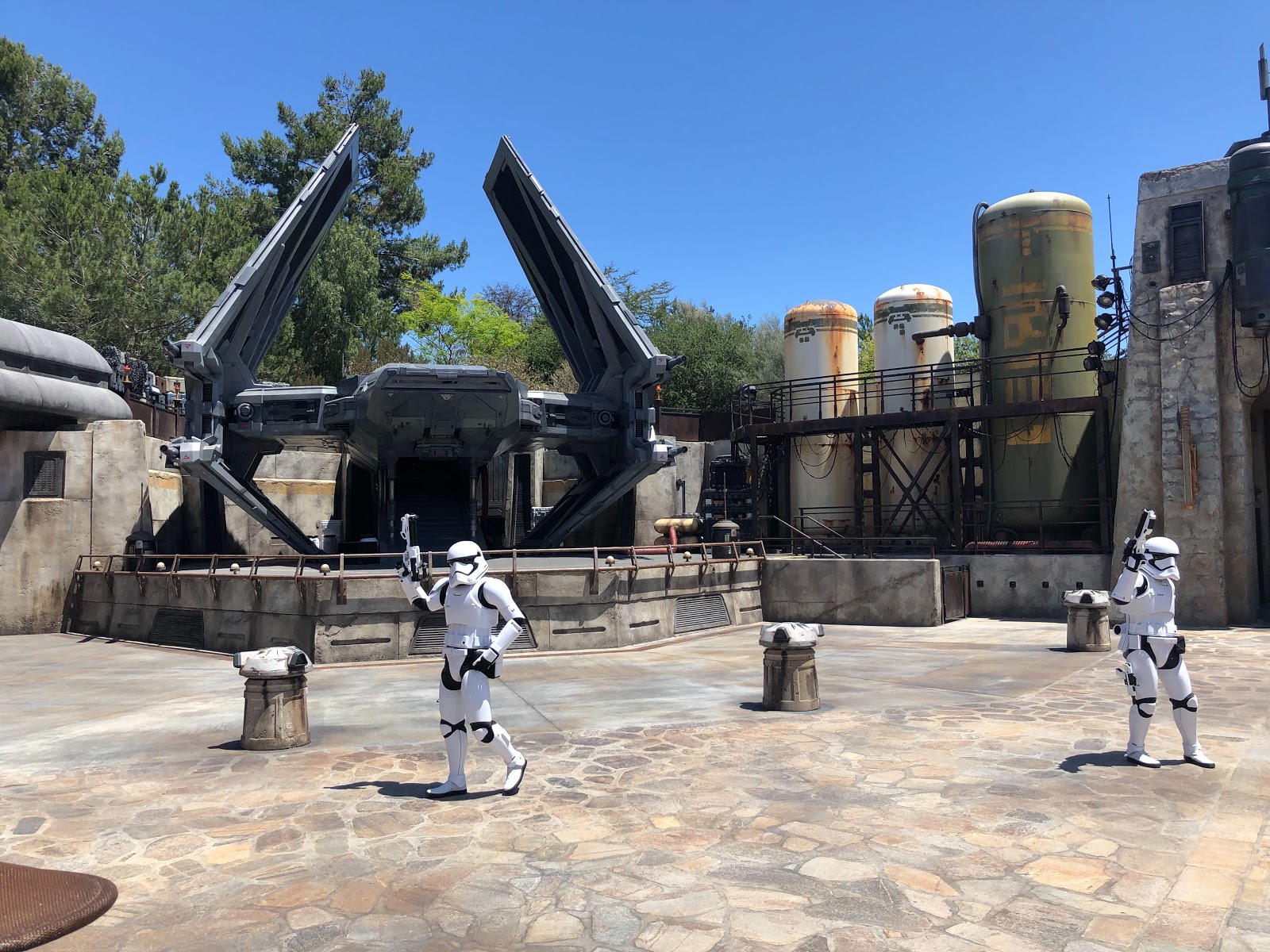 As others have already noted, stepping through the tunnel from Frontierland’s Big Thunder Trail into the fictional city known as Black Spire Outpost (set on the newly created planet of Batuu, a sort of amalgam of all the Star Wars planets we’ve known before) does indeed feel like you’re leaving Disneyland behind and entering an entirely different, separate park. Whether that’s a good thing or not has been hotly debated among theme park aficionados, but to my estimation this enormous expansion accentuates what makes Walt’s original Magic Kingdom great instead of detracting from it.

Star Wars: Galaxy’s Edge, like the beloved 42-year-old blockbuster movie franchise that inspired it, is a combination of fantasy, adventure serials, and westerns, all set in a futuristic universe steeped in nostalgia, so it’s no wonder Disneyland makes the perfect home for this groundbreaking new land. And I say “groundbreaking” because Galaxy’s Edge finally takes the daring leap in making the environment itself the star of the show, not any one experience within. After Pandora: The World of Avatar opened two years ago at Walt Disney World’s Animal Kingdom, I feel like the overwhelmingly positive reaction was divided evenly between the jaw-dropping Imagineering work that went into its landscaping and the equally impressive feature attraction Avatar: Flight of Passage. But my prediction after we come out of this opening weekend of Star Wars: Galaxy’s Edge is that most guests will be buzzing about Batuu.

Star Wars, as a franchise, has always thrived best when its worlds feel lived-in and tactile, and Black Spire Outpost achieves both of those qualities throughout. Blaster holes in the sides of buildings are remnants of past local squabbles, while the bustling Marketplace calls to mind an atmospheric Middle Eastern bazaar. There are droids scattered around, both new and familiar, and the scenery within the city itself indicates an eclectic, out of the way community populated by citizens from a wide variety of alien backgrounds. On the outskirts of town, the natural splendor is interrupted by a Resistance encampment, where a ragtag military force prepares to do battle with the menacing First Order, whose troops have just arrived on-planet via the imposing TIE Echelon craft parked on the opposite side of Black Spire. Speaking of which, the city’s namesake petrified tree remnants tower over guests with intricate rockwork and jagged edges stretching into the sky.

One of my favorite things about Star Wars: Galaxy’s Edge is that not everything is readily apparent. Some of the most interesting shops have entrances that are almost nondescript, like the windowless Dok-Ondar’s Den of Antiquities, which (aside from a few scattered artifacts placed haphazardly outside the sliding front doors) you’d have to wander into to know the endlessly fascinating contents inside. It’s beyond rewarding to invest time in exploring Black Spire Outpost, and every nook, cranny, and corner holds a unique discovery, both inside the buildings and along the exterior pathways. All the Disneyland Cast Members working in Galaxy’s Edge have been trained to act as though they are residents of the Star Wars universe, and of Batuu specifically. They’ve come up with their own backstories and have been provided with a list of local expressions they’ll greet you with, like “Bright suns!” during the day and “Rising moons” after nightfall. Visitors from outside the land are called “off-worlders” and the words “Earth” and “Disneyland” are unknown, though I was able to spot the Star Wars logo on the very bottom rear side of the merchandise packaging. It seems sometimes even the most strictly immersive environments are subject to corporate branding.

The place I (and many would-be regulars) will find myself hanging out in the most is likely Oga’s Cantina, the purposefully-dingy watering hole that’s reminiscent of—but not overly similar to—the Tatooine dive bar where Luke Skywalker met Han Solo for the first time. Here, the entertainingly off-kilter, Paul Reubens-voiced droid R3X, formerly of Star Tours fame, has found a new home as the resident DJ. Rex, as he calls himself, pipes up with plenty of hilarious one-liners and inside jokes referencing his previous employment in-between songs derived from an array of Star Wars sources. All I know is I can’t wait for Disney Parks to make Rex’s full playlist available to own, but until then I’ll be happy whiling away the hours in this particular wretched hive of scum and villainy. 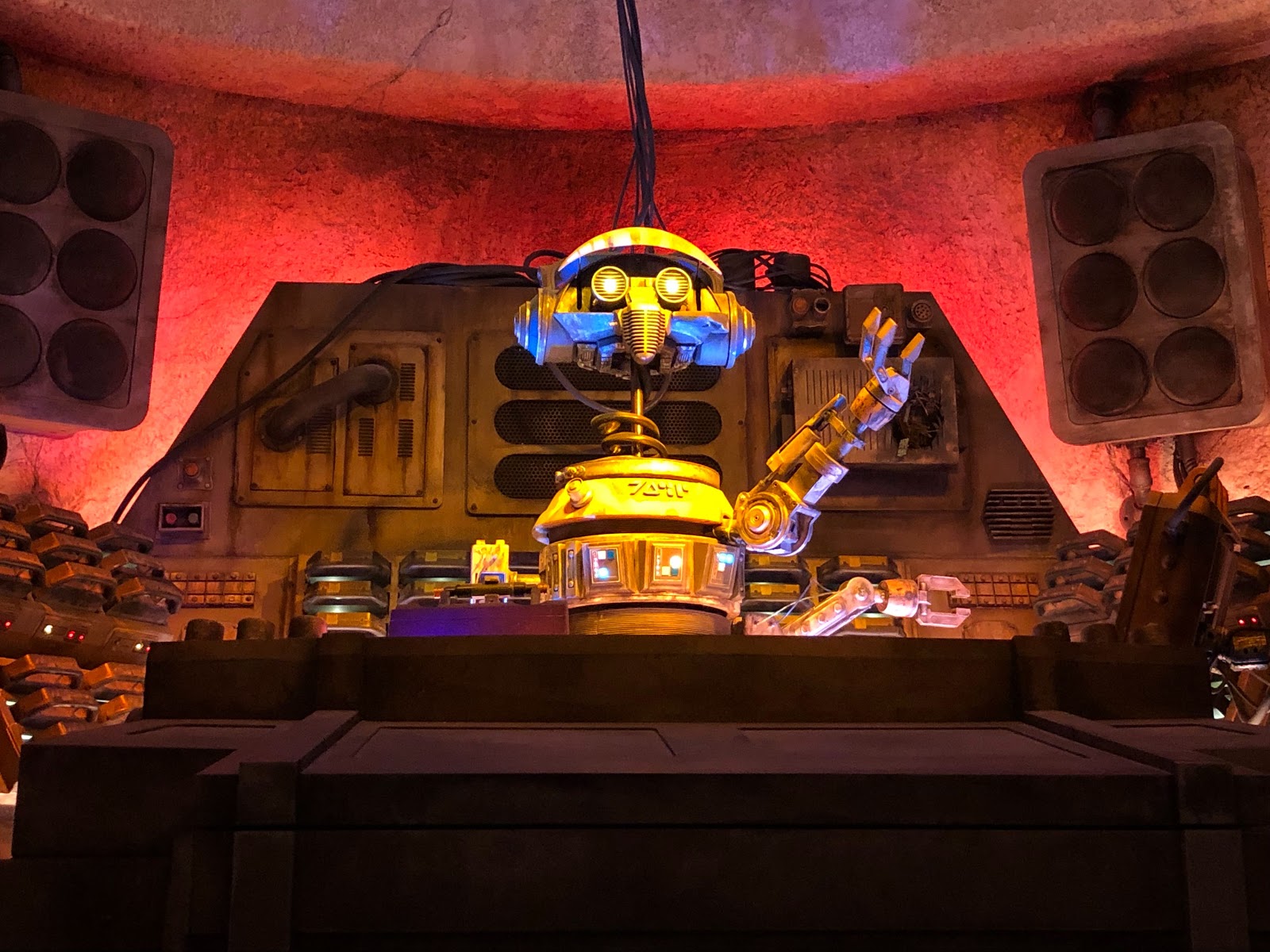 I can’t emphasize enough how much there is to explore in Star Wars: Galaxy’s Edge. The entire land is basically one big Easter Egg for Star Wars nuts to decipher, though it’s hard for me to imagine how someone not as well-versed in the property would react. Although plenty of in-universe food, countless items of specially created merchandise, the exhaustive Play Disney Parks app which contributes an entire additional layer of interactivity, and a full-size Millennium Falcon parked outside its attraction all add up to make this land a must-see for even the most novice Star Wars newcomers. Any fans of themed entertainment in general should make a point to visit Batuu at least once, just to breathe in the atmosphere and the astounding engineering involved in bringing Black Spire to life, and the most dedicated die-hards like myself are going to need several dozen visits (at least) to truly absorb every detail. 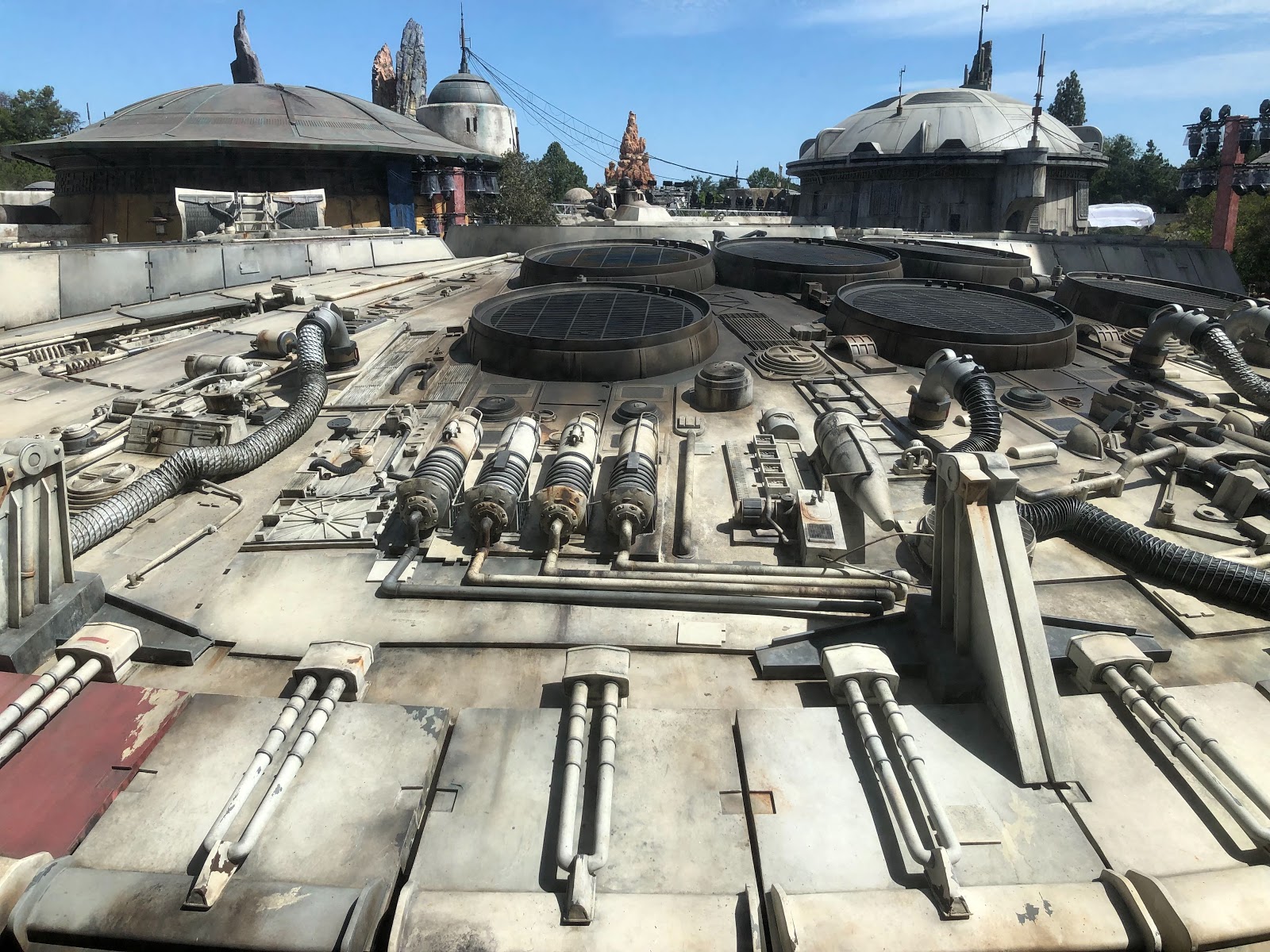 Star Wars: Galaxy’s Edge is open now through June 23 for guests with reservations for the land, and then June 24 onward for all ticketed Disneyland attendees willing to wait for entry.