My First Visit to Disneyland

I had eight hours to kill before my flight home from Los Angeles, and I couldn’t think of a better way to spend the time than at Disneyland. My Uber dropped me off on Harbor Boulevard with my luggage and wished me luck. Off I went to bag check and then purchased my tickets. I opted to get the Park Hopper pass even though I was only going to California Adventure to ride Radiator Springs Racers. After placing my bags in the storage lockers, I was ready to see a lifelong dream fulfilled – I walked into Disneyland Park. Beneath the Main Street Train Station, I entered Walt’s kingdom and saw Pluto waiting to greet guests. My real first experience with this magical park was with one of the original six characters and I snapped my photo with the loveable dog. From Main Street to the Sleeping Beauty Castle, I went in search of a churro to satisfy my lunch need. I found it in the foreground of the Matterhorn and bit down into my first Disneyland snack. It was the best churro I had ever eaten.

Heading towards the famed mountain, I secured a FASTPASS for later in the day and darted off to Mickey’s Toontown. The magical land was wonderful with all the beauty and zany decorations that were similar to the ones that made Magic Kingdom’s Toontown Square so wonderful to be in. I almost made it on to Roger Rabbit’s Car Toon Spin, but the line was over thirty minutes long. I didn’t have time to waste waiting in line.

My rule for lines was twenty minutes or less. Out of Toontown I went, and into Fantasyland passing the carousel and Mr. Toad’s Wild Ride. To be back on Mr. Toad’s would be a childhood dream. But I kept walking because I wanted to circle the park and take in every inch of Disneyland possible. I was alone, and I didn’t need to follow any timetable or schedule except for what I wanted to do.

The first actual attraction I enjoyed was the Frontierland Shootin’ Exposition. I love shooting galleries and there was plenty of space at the line of toy guns. Blasting away at the targets, I could connect with the many years of joy I had at the Magic Kingdom cousin to this attraction.

I walked around the Rivers of America staring at the distant peaks of what would be Galaxy’s Edge and made my way to Critter Country where I found The Many Adventures of Winnie the Pooh with a five-minute wait. I joined the line and soon found myself in the Hundred Acre Wood. I waved to Pooh, Rabbit, Tigger, Piglet, and Eeyore as I left to explore New Orleans Square.

The Haunted Mansion is one of my favorite rides in all the Disney Parks. From Florida to Paris, I love this attraction because the idea and concept is not to scare you like a horror movie, but to offer guests the thrill of the supernatural. I decided that Matterhorn had to be the attraction I would spend my FASTPASS on, but Haunted Mansion came a close second. After meeting Redd while walking through New Orleans Square, I walked by the Haunted Mansion to take in the beauty of the ghostly building, and I saw that the line for the attraction was virtually non-existent. I asked the Cast Member how long of a wait, and the response of 10-15 minutes saw me march through the queue to the front of the building and the show began.

From the creepy spooks and the haunted ghouls of the Haunted Mansion I climbed into Tarzan’s Treehouse. This redo of the classic Swiss Family Robinson to the late 90’s animated hit had a short line too, and though the theme of the attraction had changed, I quite enjoyed the walk, and the shade of the tree.

There was no way I would get on Indian Jones Adventure, which I regret because he is one of my favorite movie heroes, so I hightailed it back down Main Street through the esplanade and into California Adventure. I knew it would be impossible to see all the attractions of both parks in such limited time, and for many people they would have confined their time to one park. I just couldn’t be at Disneyland Park and not at least walk through California Adventure. Since Cars Land was built I have eagerly waited for the day that I could walk into Radiator Springs and enjoy the beauty of Radiator Springs Racers. When I boarded the attraction through the single rider’s line, I truly felt like I was in the movie. The Imagineers have created one of the most beautiful lands in the North American Disney Parks. (I have yet to visit Galaxy’s Edge.)

It was getting late in the day and after circling around through A Bug’s Land which would be demolished in just a couple of weeks, I ventured through California Adventure taking in all the sights, but knowing I needed to get back to Disneyland Park. My FASTPASS for Matterhorn was coming up.

I passed through the gates of Disneyland Park and headed for the Swiss mountain that has dotted the landscape for over sixty years. I sat down in my bobsled and giggled with joy as the attraction took off. The Matterhorn Bobsleds are the best rollercoaster in any Disney Park. I can’t describe why I liked it so much. It has many elements of Big Thunder Mountain and Everest but knowing that it was the original rollercoaster of any Disney Park made it even better.

I walked into Adventureland after my time on Matterhorn with a smile thinking that it was the last attraction I would be able to enjoy. To my amazed eyes, guests could walk onto the Jungle Cruise. It’s been a long time since I have ever seen an empty queue at the Jungle Cruise. To the boats I went and sat and listened as the corny jokes from the skipper filled the air while the boats journeyed deep into the rivers of the world. I made note of the similarities and differences between the California and Florida version of the attraction. Even though I have heard the same corny jokes a million times, I laughed right on cue and left the Jungle Cruise with a bigger smile on my face then when I boarded.

The time was moving along and soon I would need to be at the airport for my flight. I had yet to see Tomorrowland and after walking back through Frontierland and Fantasyland, I made it to Tomorrowland where I found Star Wars Launch Bay almost empty and Cast Members looking for visitors for their characters.

That’s when I came face to face with Darth Vader. He was tall and intimidating to meet, but then I met Rey and she was delightfully fun and charming as her character would be. Thinking about how lucky I was to have met three characters now with little to no wait, I turned a corner in the near empty Star Wars Launch Bay and saw the line for Bobba Fett. I jumped in the four-person line in just the right time. The people who tried to join after me were turned away as Fett would be leaving soon.

My last attraction at Disneyland was Great Moments with Mr. Lincoln. Inside the Opera House was the president waiting to tell his story. This version like the one that appeared in the 1964-65 World’s Fair was inspiring and showed many similar elements from the Hall of Presidents and the American Adventure in Walt Disney World. 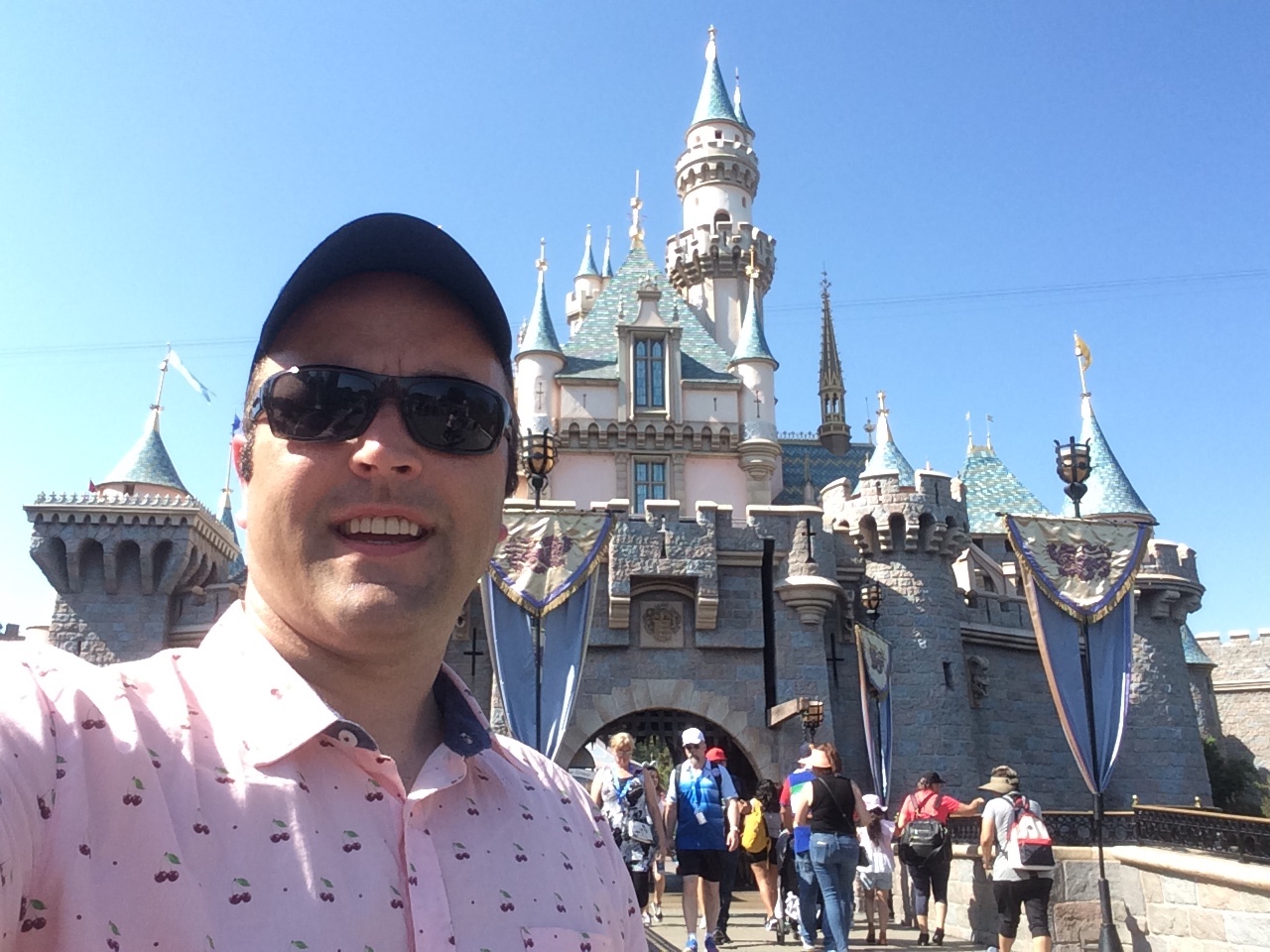 It was time to leave and as I left the park for my midnight flight home. I left with numerous souvenirs for my kids and thousands of small memories about the first time I saw Disneyland.

Before I left, I made sure to stop in front of the Fire House and take a picture of the candle still lit in the window for Walt Disney. His magical land is a beautiful place to visit, where fun could be had by anyone. Happy Birthday Disneyland, and may you have many more years to come.