A Pirate Room is Born

The unthinkable happened in January of all months. We had a lovely warm-up to the 50s and 60s, which turned all the snow into rain. A lot of rain. Two days straight of rain. The six inches of snow that had been on the ground also melted all at once and my poor sump pump couldn’t handle the massive amount of water. My beautifully finished basement took 6 inches of water and I lost almost everything. I was at Disney at the time enjoying a nice warm break after the craziness of the holidays. I came home to a wet, damp, musty basement with my blue ocean like Berber carpet already gone. I stood in what was left of my Little Mermaid room and wondered how was I going to completely redo it all. But I did have a blank canvas. I took the insurance money and put a wonderful blue ocean like Florida Tile through the entire basement. Learned that lesson! But it was significantly more expensive than carpet. Between that and having to replace all the lower wallboard and my wood stained baseboard, I didn’t have much of the insurance money left to try and buy furniture.

So I started looking at all the furniture stores scratch and dent pieces for some inspiration. And at Big Lots, I found it!!! This beautiful dresser caught my eye and I thought it was something that you find on a Pirate Ship. I had been thinking of doing a more adult Little Mermaid themed room (you Disney geeks get it) and a pirate room would be perfect to showcase my brassy style mermaid pieces. Plus,I loved the Pirates of the Caribbean ride and Captain Jack. This piece was damaged but I knew I could fix it. And for $55, it was the right price. My brother came to my rescue with his truck to take it home and the pirate room began. 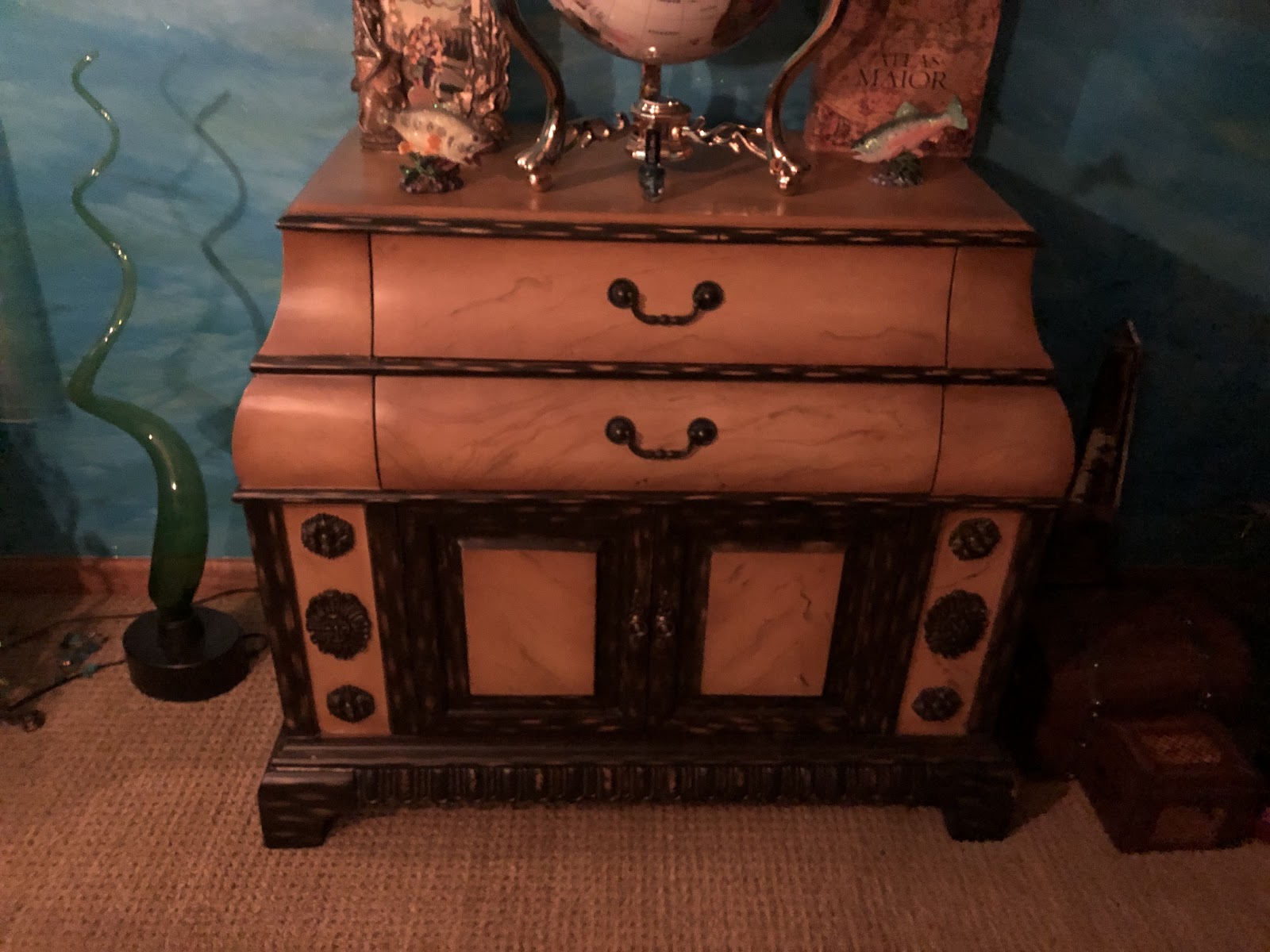 My neighbor Darla (who since got smart and moved to Florida and I miss her terribly) was the heart and soul of designing this room. You know when you get a vision of something in your mind but you aren’t quite sure how to make it come to life? She is the person that can do it! She had just watched some DIY show about putting glitter in paint and that became the ocean on the walls. 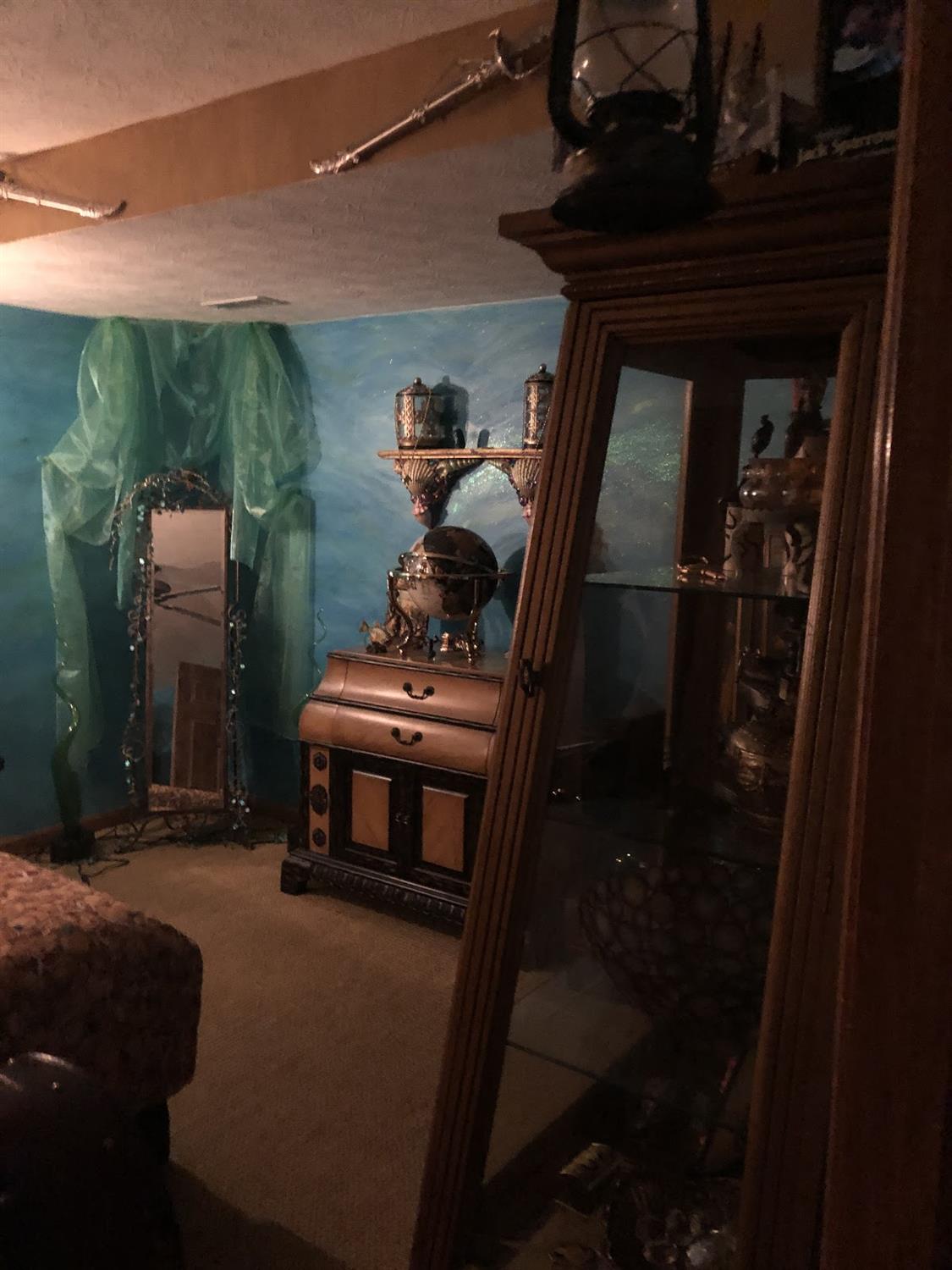 Then she antiqued the new bright white doors to look like old wood. I went to Salvation Army and found a 60’s style old glass curio cabinet for $20, a plain black broken armoire at Target for $40 and two old wood end tables for $5 each. 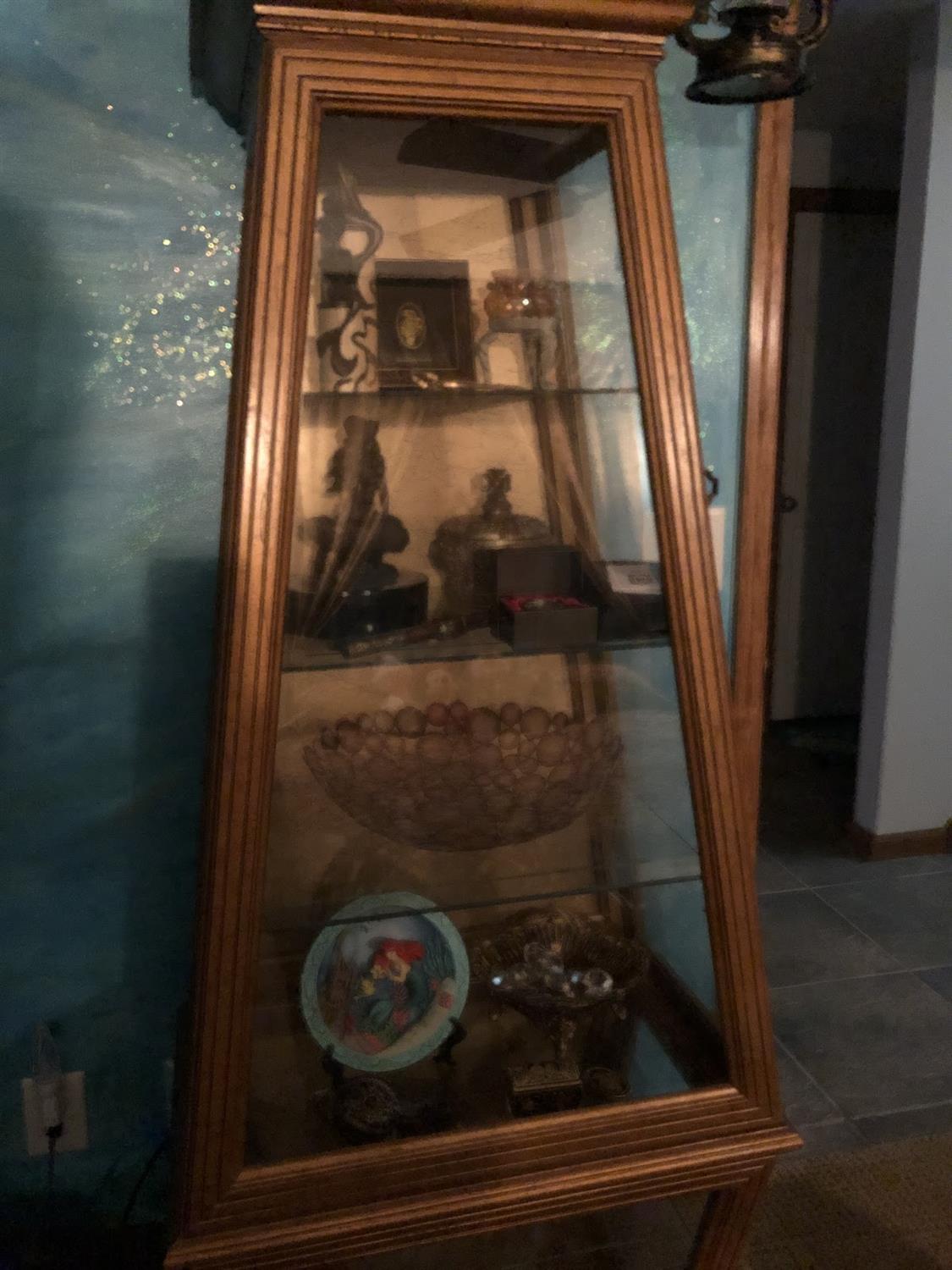 I went to the carpet store and looked through the leftover carpet pieces and found one that was a plushy brown that looked like wood. The owner was so happy to get rid of it they gave it to me for free and just charged me to install it. The pirate room was coming together! I got out all my brass Ariel and Ursula pieces and put them in the room. I was so happy to see them all displayed instead of stuck in a curio cabinet or still in the original box. 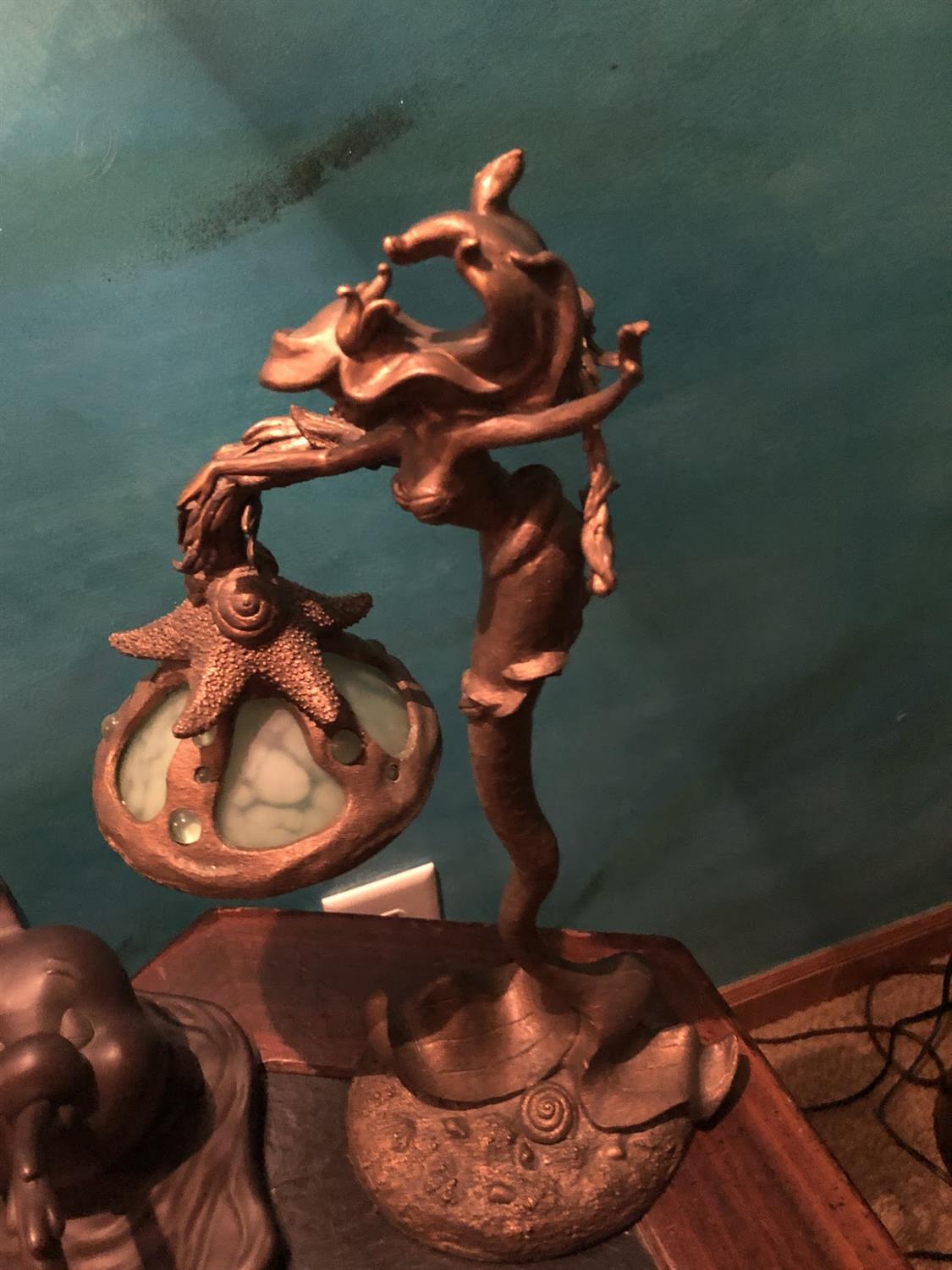 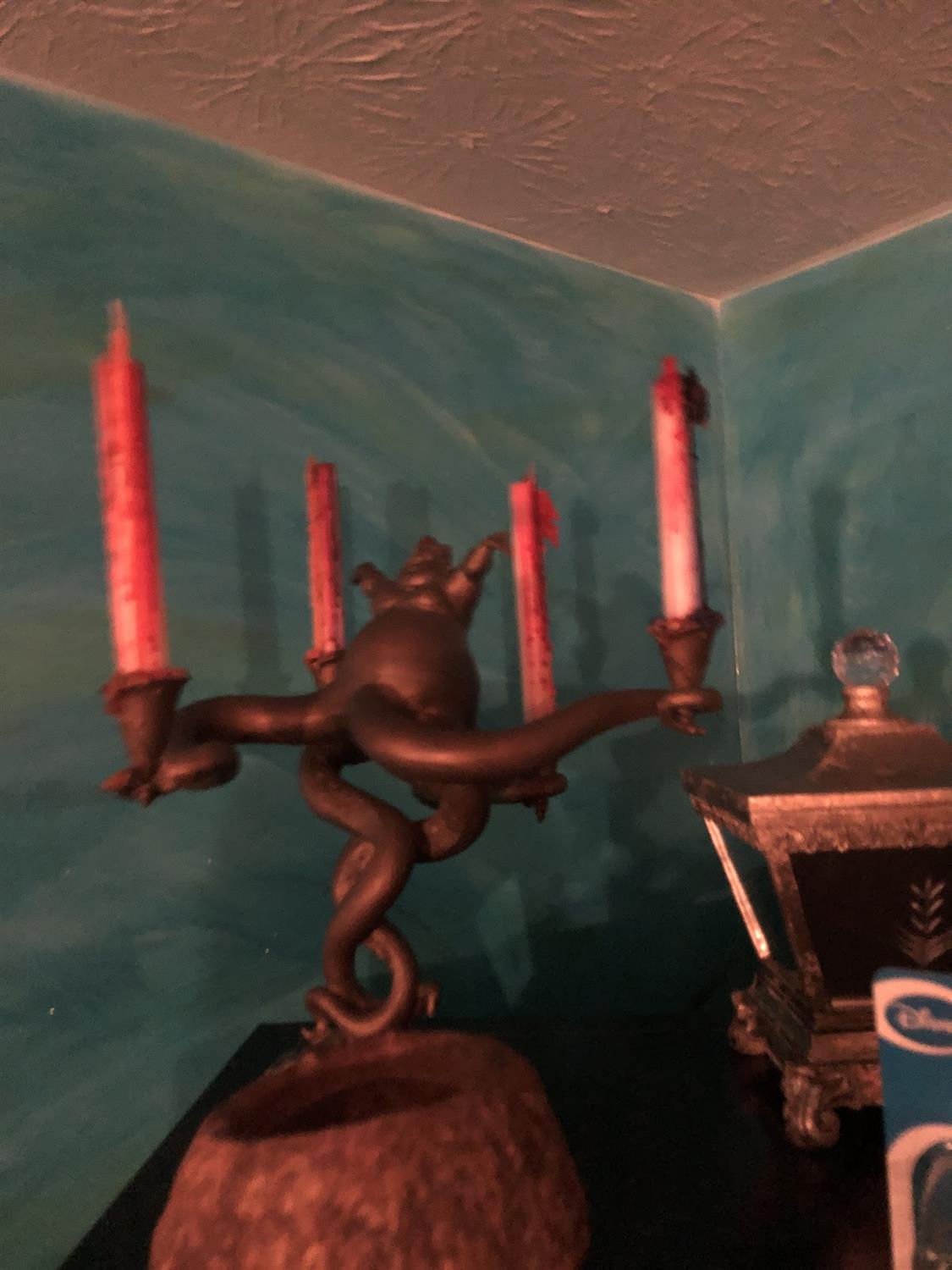 Thanks to Jody Daily for designing these two pretties 😍

I started to show people the room and the reaction was priceless. When friends come to stay they always request the pirate room over the Mickey room (the Mickey room….that’s another story for ANOTHER time) and a surprising tradition began. When people stayed in the room, they would leave something in it. My friend Kendra left her necklaces from the flying pig because it was pirate booty. And she sent me a Jolly Roger flag when she got home. My friend Bruce left a weeble style Bruce figure and a Mike Wazowski dangle from Tokyo Disney with his name on it, on the shelf that Darla made and painted. Bruce is now in heaven with Walt so it makes me smile to see it. Another friend left an empty pineapple rum bottle, and another gave me a talking Jack Sparrow doll that OF COURSE I’ve left in the box. My other brother contributed the LEGO Jack Sparrow alarm clock and in taking pictures for this article I discovered a skull-shaped nail polish bottle on the dresser. Don’t know who left that! 😀 This room continues to be a joy! So when life gives you lots of water…make a Disney themed pirate room!

Anita Schaengold is a founding member of the Dayton Disneyana Foundation,(http://daytondisneyana.org), a non-profit organization dedicated to preserving and sharing the rich legacy of Walt Disney. They host several events throughout the year to raise funds for Pirate Packs as well as coordinate efforts on behalf of the group.