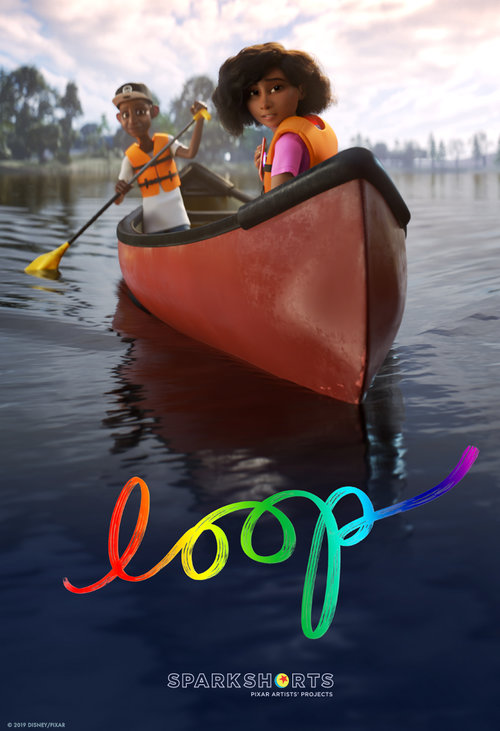 The next wave of Pixar SparkShorts will debut exclusively on Disney+ starting at launch on November 12th. I got to see the next three shorts early when they played a limited run at Disney’s El Capitan Theatre in Hollywood. Up next is Loop from Director Erica Milsom.

The story takes place at a summer camp where the kids are venturing out for their daily canoe ride. A boy arrives late and misses the boat with his friends, so the counselor asks him to take out a non-verbal girl on the spectrum with significant sensory challenges. In the face of a big challenge, the boy has to get creative to help his peer through her outing.

The short’s title comes from one of the girl’s repetitive behaviors, pressing an app on her phone repeatedly that plays a few notes followed by the sound of a dog barking. Mimicking the dog’s bark is one of the few sounds she is able to make when she has a moment of need. She also uses her phone to show images of what she wants, but the images don’t always relate to a need the way a typically developing person would think.

I give the film credit for a few reasons. It not only tackles a topic that is rarely seen in film, let alone animation, but also takes a few moments to show the audience what it’s like to experience severe sensory impairments that some individuals on the Autism Spectrum go through every day. This includes heightened brightness, ambient sounds brought to the forefront to drown out spoken words, and even seeing the world at times as flashes of still images with missing action in-between. When the girl begins to flap around, rocking the boat trying to find a way out, it helps to underscore why she is in such a state of panic. It also shows how people high on the spectrum express their emotions differently than you might expect.

As a story, however, Loop leaves a lot to be desired. The boy isn’t unkind in the beginning and his character journey basically takes him from being reluctant about an unknown situation to being friendly towards a peer who is misunderstood by the world, but it’s not like they’re best friends at the end. The biggest takeaway is the education the audience receives about dealing with someone on the Autism spectrum. But as the saying goes, “If you know one person on the spectrum, you know one person on the spectrum.” It’s called a spectrum disorder for a reason and this short only gives you one puzzle piece to a much bigger picture. I hope it encourages viewers to learn more about how to best engage people with autism in their lives, knowing that it looks different for every individual.