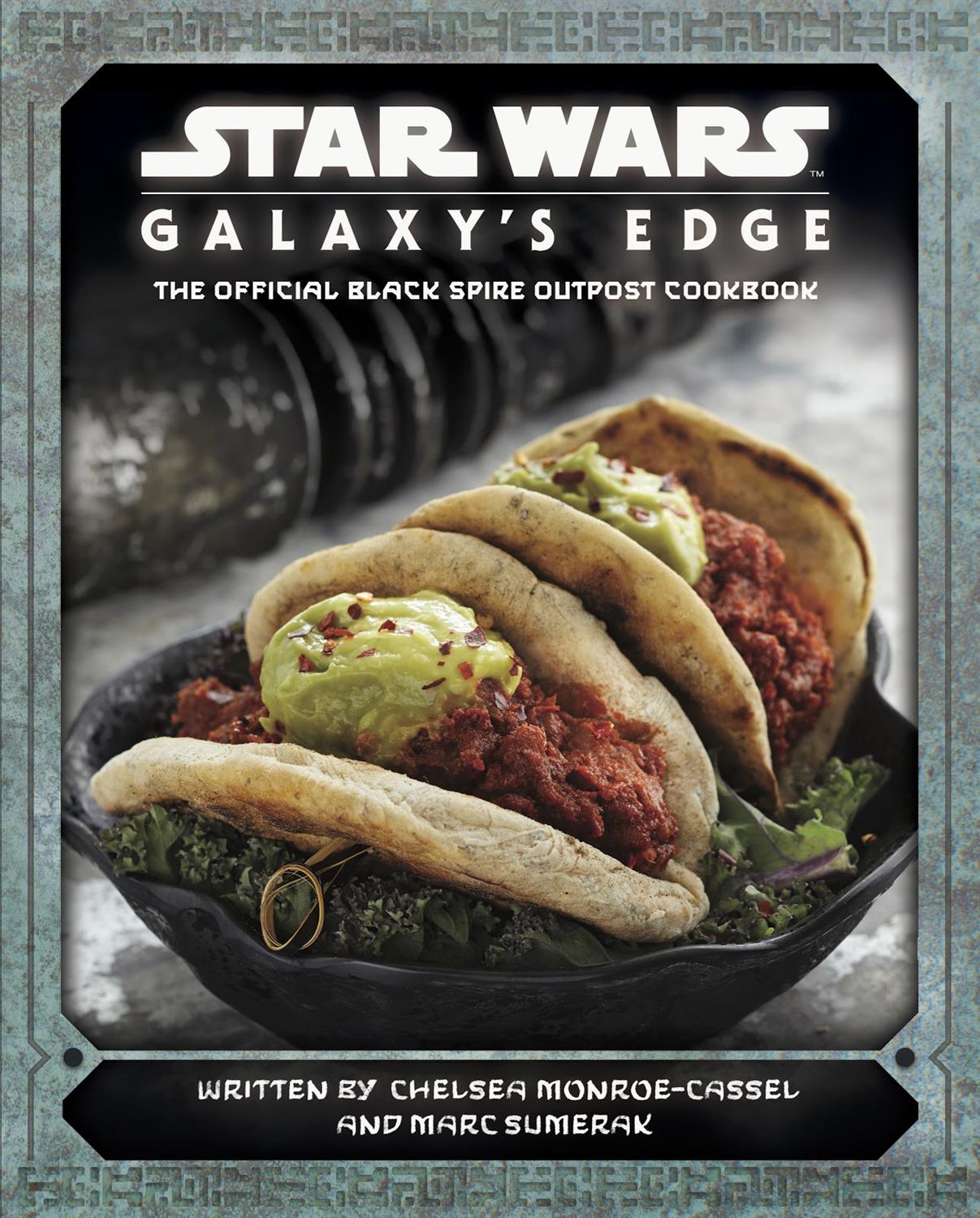 The ultimate souvenir from Batuu may just be Star Wars: Galaxy’s Edge – The Official Black Spire Outpost Cookbook. It’s the only way for fans to bring home the smells and tastes of the Star Wars-inspired land at Disneyland Park and Disney’s Hollywood Studios. Now you can savor your favorite snack, meal, and drinks from a galaxy far, far away from the comfort of your own home.

I have to confess that I’ve been a bad off-planet visitor, having never enjoyed a meal at Docking Bay 7. That’s probably why I was unfamiliar with the cookbook’s author, Strono Tuggs, aka Cookie. Every time I visit, I see his Seiner-Chall Utilipede Transport on the roof of the eatery delivering ingredients from all over the galaxy, but I have yet to enjoy the legendary Fried Endorian Tip-Yip that I’ve heard so much about. Now I can make it myself anytime I want. 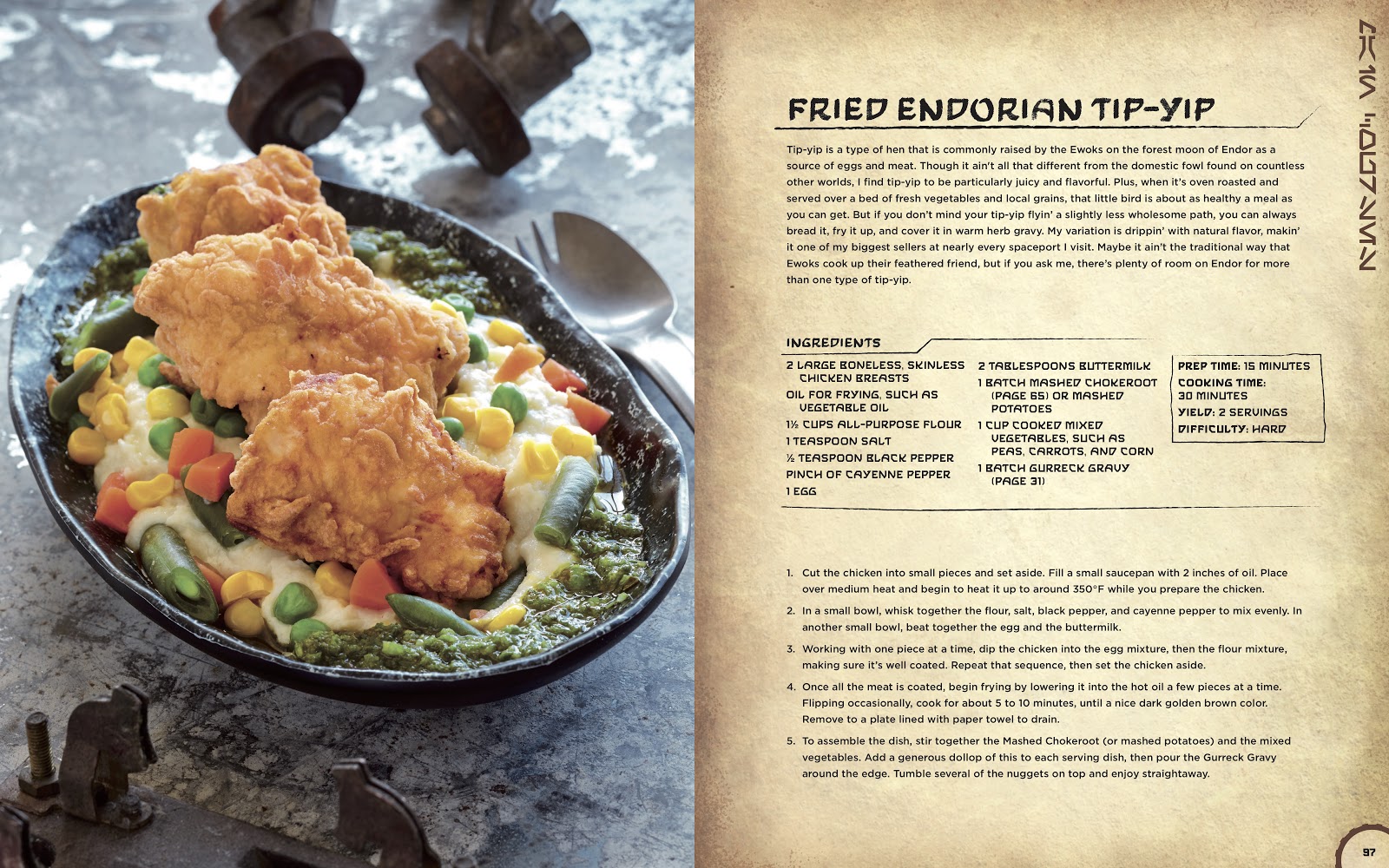 The first 25-pages provide background information on the fabled chef, who used to serve meals at Maz Kanada’s castle before taking residence on Batuu. This section is accompanied by illustrations of the Artiodac chef and the heart of house kitchen that visitors to Docking Bay 7 don’t get to see. He also provides a nice overview of the land’s other eateries, including “Copycat recipes” of some of their best dishes, including the Ronto Wrap from Ronto Roasters.

Cookie then groups recipes into six sections. “Condiments, Sauces, and Garnishes” covers many of the ingredients that you will use on some of the dishes and drinks, including custom seasoning blends, salad dressings, gravy, and decorative accents. “Sides, Starters, and Snacks” covers some small plate items. It lists which main courses they pair well with and the “Main Courses” section also offers suggestions for sides, or in the case of Tip Yip, it should be served on top of the Mashed Chokeroot (along with Gurreck Gravy from the first section). “Soups and Stews” offers four galactic liquid meals, and “Breads” includes Ronto Wrappers, Polystarch Portion, and other breads that can be served alongside your meal. “Desserts” includes some tasty ways to end a meal and “Drinks” includes some recipes lovingly stolen from Oga’s Cantina, both alcoholic and non-alcoholic options. While many of the foods in the cookbook seem exotic, they primarily use some everyday ingredients. An unusual looking blue pasta is simply boiled with some blueberry tea bags to get its otherworldly color, for example. Compared to previously published Star Wars cookbooks, this Black Spire Outpost Cookbook is more about making something feel organically from the Star Wars universe rather than putting a Star Wars spin on a classic dish, like “Boba Fettuccini.” There’s certainly room for both in your pantry and the themed cookbooks would be better served for Star Wars movie nights and parties, while the Galaxy’s Edge Cookbook is ideal for when you’re craving a visit to Batuu and need to buy yourself some time until your next Disney destination vacation becomes a reality.

I’m excited to implement some of the recipes from Star Wars: Galaxy’s Edge – The Official Black Spire Outpost Cookbook into my recipe routines, and to try Fried Endorian Tip-Yip at home. Because Cookie provides descriptions for each dish, the book also makes a fun read and add’s another layer of storytelling for your next Batuu experience.