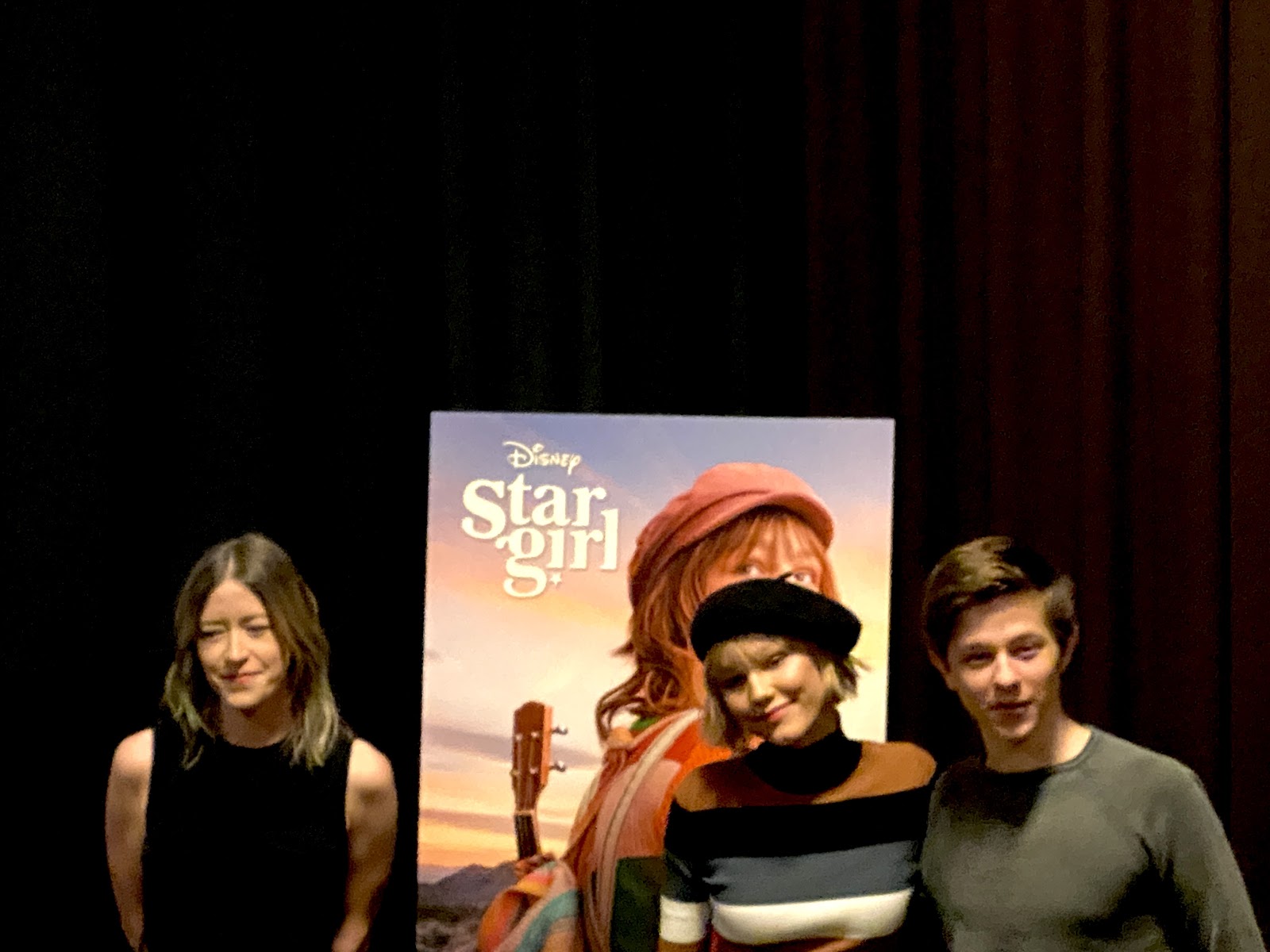 When I saw Stargirl, the new Disney+ original movie that starts streaming on March 13th, it was in an actual movie theater in a rare opportunity for a film destined for a streaming platform. But even cooler was the question and answer sessions that followed with two of the stars, Grace VanderWaal and Graham Verchere, and Director Julia Hart. We got to learn about the movie making magic that went on behind the scenes to bring Jerry Spinelli’s beloved novel to life.

“I read the book and I read the original draft of this script and it was weird because Stargirl in the book and in the original script sings ‘Happy Birthday’ on her ukulele and it was more old standards like that,” Julia Hart shared about making her adaptation of Stargirl a musical. “But I saw the opportunity to turn this story into a musical to give it that cinematic transcendence and when I first read it, I heard and I saw Stargirl singing “Be True to Your School” on her ukulele. That song just felt so Stargirl, it felt like very much what Micah [High] needed. And then I also saw Stargirl later in the film doing the same song with a full band and cheer squad and their team, too. It’s one of my favorite songs and it just felt like a perfect Stargirl song. And you know, when I went into Disney to pitch Beach Boys and The Cars and Big Star, all this stuff, I was just thinking maybe we can get something like that. And I’ll never forget when I got the email from the music department saying all the songs are cleared. I was like ‘What? Really?’”

For a director used to working on independent films with a tight budget, getting the rights to the songs that were important were a dream come true. But when you see Stargirl, you’ll hear these classics in a  whole new way. “My husband, Jordan Horowitz, who I co-wrote the script with, also produced La La Land,” Julia added. “So we were able to bring on Marius de Vries, who is our music producer who did all the arrangements and a whole bunch of pre-recordings and rehearsals… And then Mandy Moore, who also choreographed La La Land, choreographed this and she was amazing, she did such a good job with these guys. And it was just so cool to get to make a musical. I was six months pregnant and I was like let’s make a musical, why not?” 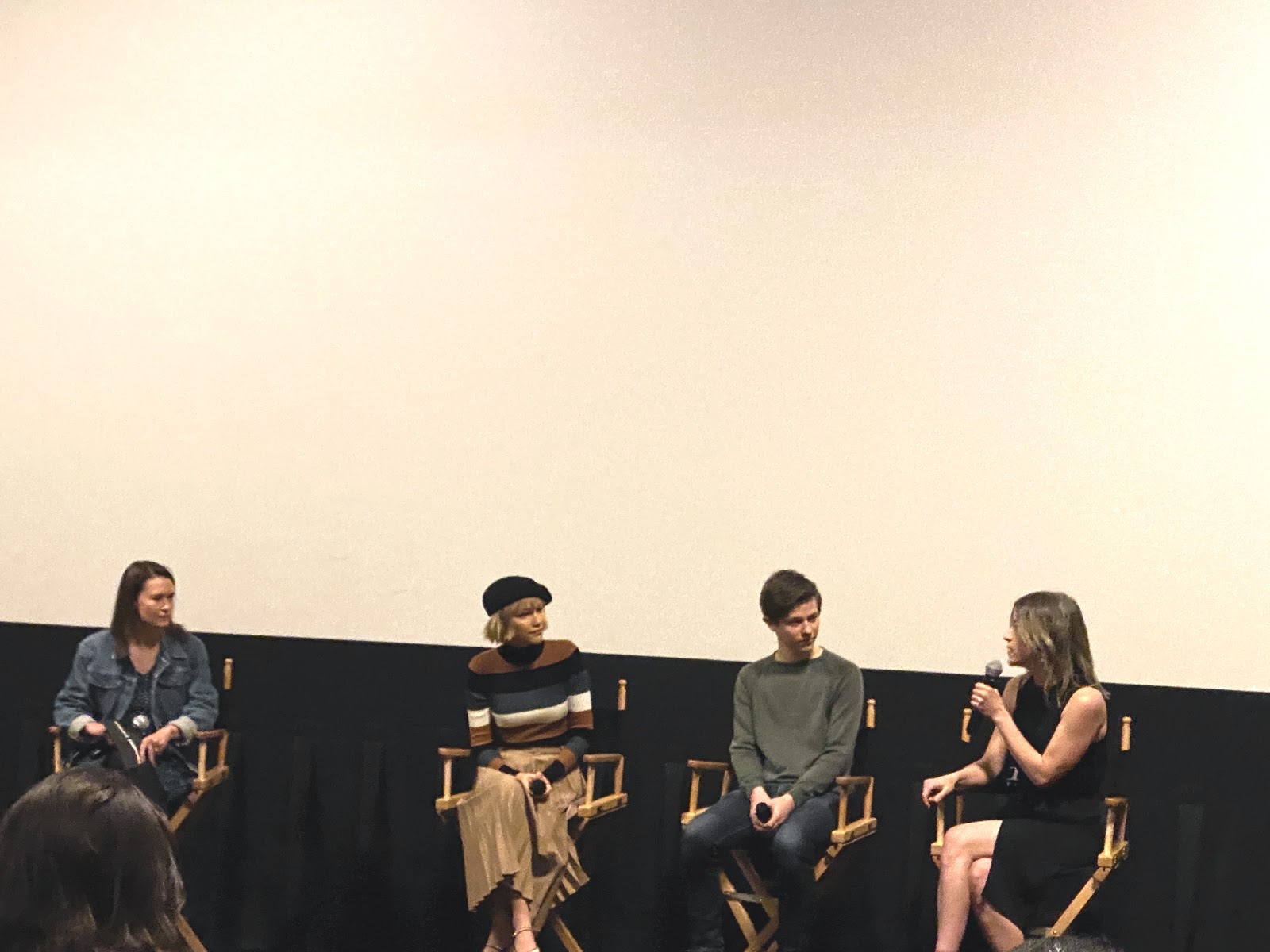 At a time where maternity and paternity leave are hot button issues, Julia found Disney to be incredibly supportive. “I have such love and admiration for everyone at Disney because I was asked to come interview for the directing position and they were going to be shooting in June and I was like ‘Cool, I’m having a baby at the end of May, but thanks for thinking of me.’ And their response was ‘When would you be ready to film?’ Which was the first incredible thing they did. And then we got… The baby was only eight weeks old when we moved to New Mexico to make the movie. There was a whole nursery set up in our house in New Mexico. Because it’s a musical, when you do a musical at some point you have to rehearse the musical numbers. You do some of that during the prep period, but you also… we worked six days a week. Disney provided childcare for me on that sixth day because my nanny works regular hours like a normal person. Disney was incredibly supportive the whole way through. And for me, it was incredibly challenging to be a new mom and to be directing the biggest movie I had ever made and they made it… I can’t imagine a better place to be doing something that challenging. They’re amazing. I will make movies for them as long as they will have me.”

Auditions are often described as being very nerve wracking and taxing, but that wasn’t Grace VanderWaal’s experience on her first film. “I didn’t really think anything of it. I didn’t really think it through. I should have. I just kind of did it. I did the iPhone audition thing and I was just like ‘Whatever, I’m probably not going to get this role and if I do I’ve never done a movie before.’ And that was before Disney had a hold on it I think, it was just kind of an independent idea. So it wasn’t as scary as like a big time Disney film. I think I would be much more nervous if I knew that.”

Because this was a Disney film, Grace also found her transition to playing a character on a big Hollywood film to be as easy as it can be. “It definitely wasn’t stressful,” she shared. “Disney is a very big machine and they made everything really, really simple and go smooth. Everyone knew what they were doing and where they were supposed to be. There was always someone to tell me where I was going and what I was doing. It was very easy, honestly.” 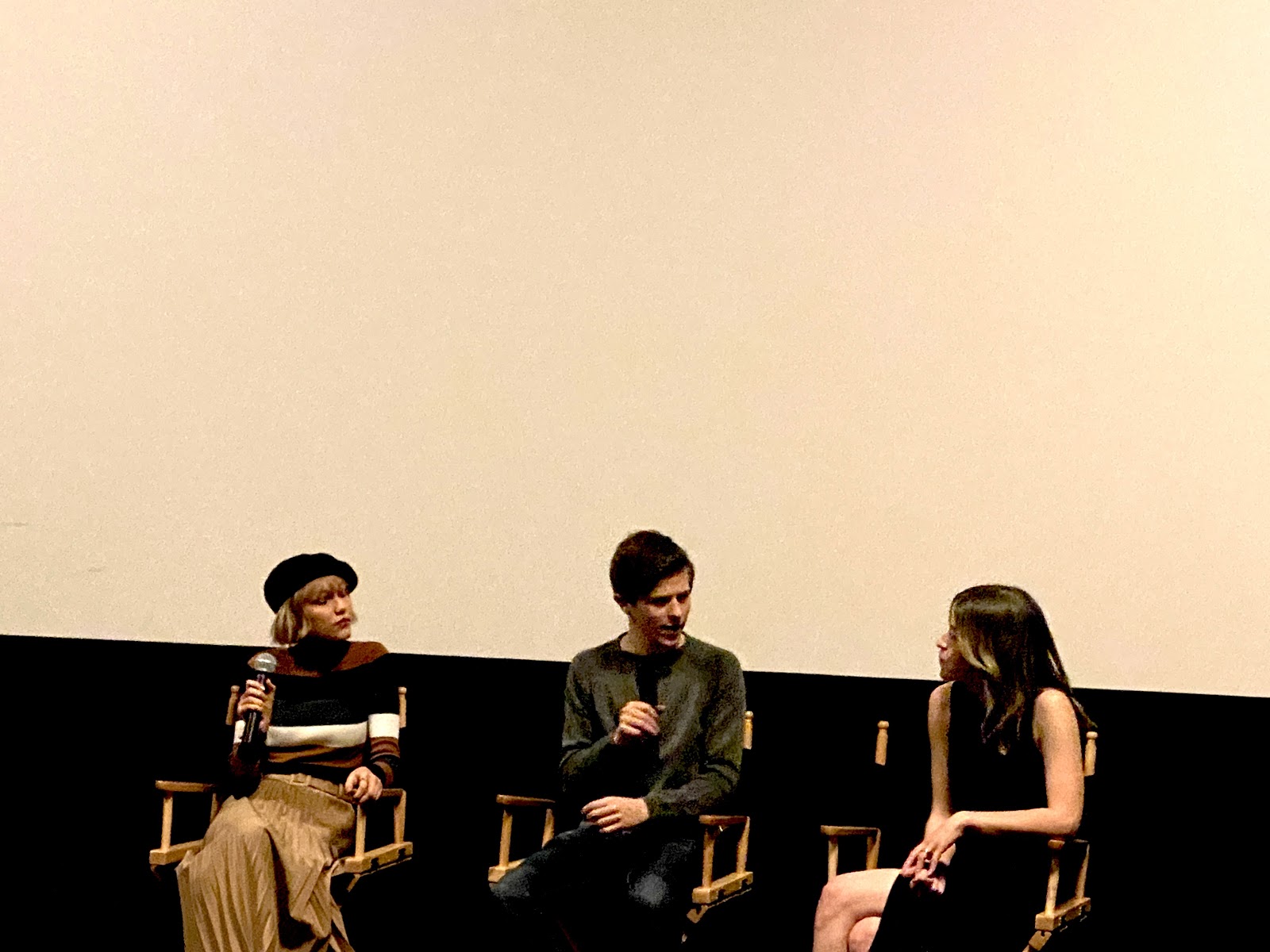 As part of Graham Verchere’s audition process, Julia Hart made him sing with Grace during a chemistry test. “That was one of the moments I knew because he simultaneously was like charmingly terrified to sing in front of her, but did it and did it well and that is Leo,” the director shared. “I think that scene was one of the easiest [to film] in my opinion,” Grace VanderWaal added about a moment in the film where Stargirl and Leo sit on her bed and sing “Thirteen” by Big Star to each other. “It was kind of further down the line where I feel like I was more comfortable being on camera… And we were all getting to know each other with the crew and camera as well. That’s one of my favorite scenes actually because of that reason. When I watch it, I’m like ‘Oh, that’s when we were starting to get the hang of it.’”

The film was shot on location in New Mexico, leading to some incredible cinematography of desert landscapes. “That was one of the most amazing things about filming in Albuquerque and New Mexico for me,” Graham Verchere shared, “Because when you see those absolutely gorgeous shots and gorgeous views, that’s just what it looks like. We saw that, too. It was incredible when you see the Enchanted Place and those gorgeous sunsets, it’s absolutely incredible. Every night it would just be incredible and it would always be better than the night before.”

“I think that Stargirl is just an ultra relatable character,” Grace shared about her on screen persona in the film. "I think that every single one of us can relate to her no matter who you are. There are differences between me and her, but obviously I think there are much more similarities. But she was really, really hard to play just because she’s much more, I don’t want to say free than me, because I consider myself a free person, but much more confident in every single bit of herself. She’s like ‘If you don’t come up and say hi to me, that’s just an opportunity for me to say hi to you.’ And even playing a part that was hard for me, especially with the extras being teenagers and I definitely have… I’m like any other person with a lot of insecurity. And even though it was a movie, it still pained me to do things in front of the extras and things like that. I felt like I was in high school, too.” 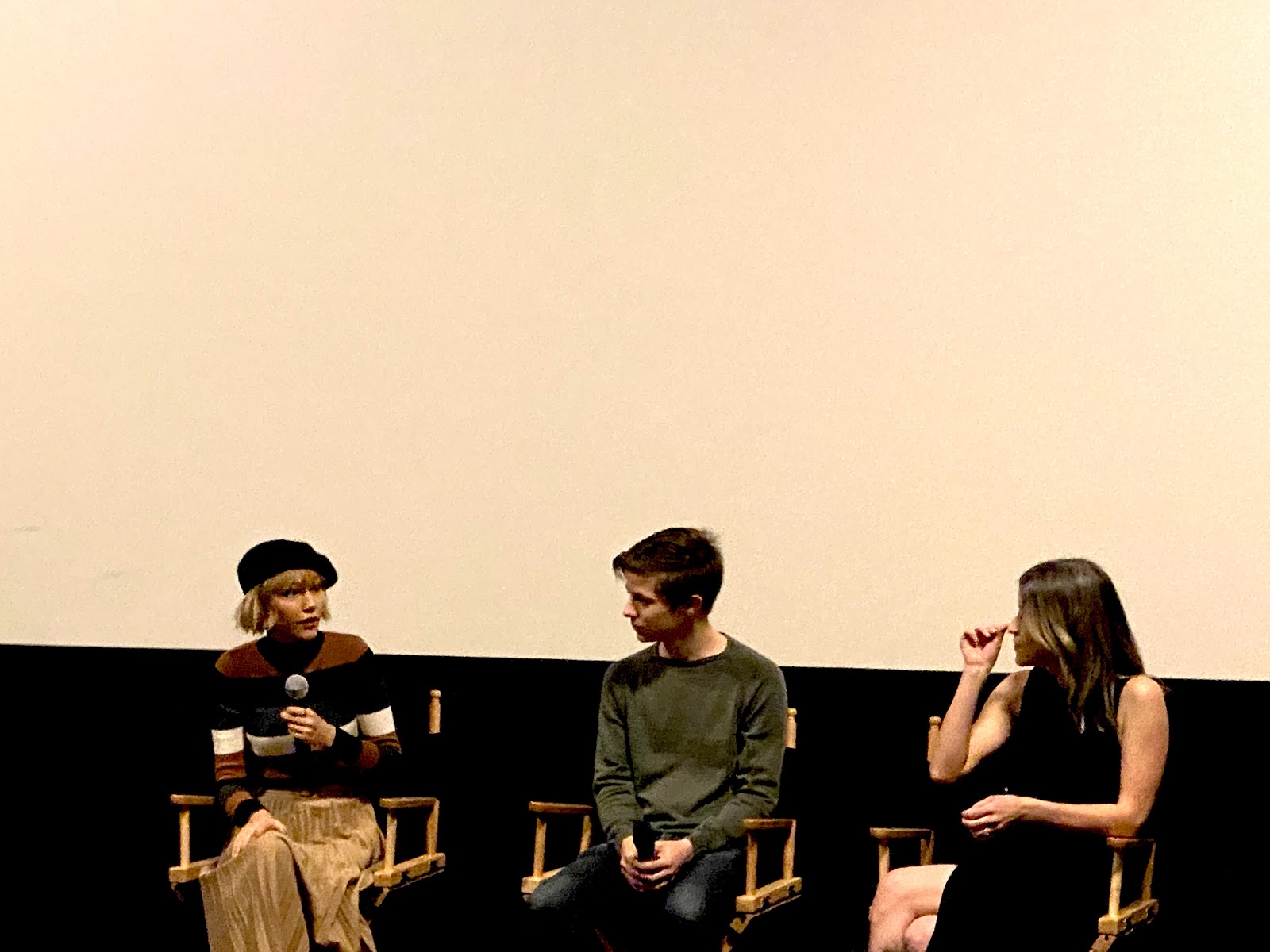 One of the biggest changes from the book is the addition of Stargirl’s mother. “I think that scene was kind of important because it made it clear that Stargirl isn’t some weird, magical, adult child,” Grace added. “Which I think sometimes it’s easy for her to become because she’s so wise and she just has these monologues where she’s figured out life more than anyone else. I think those scenes are important to show that she still is a teenager, she still has ‘Uh, mom’ moments. Like ‘I’m bringing a boy over, don’t talk to me.’”

“I felt so lucky making this movie and I’m really not just saying this… we had so much fun and it wasn’t like other film sets,” Director Julia Hart shared about this incredible project. “It was just so fun and happy and positive. Our crew was incredible, everyone, not just the actors, the young people on the crew had such a great relationship with the young actors. Everyone had such a good time and I don’t even think any of us cared about… we were just having so much fun… And it feels like a dream to get to enjoy something so much and to have it be on the level that it’s going to be at with Disney releasing it on Disney+, which is like already become so huge. It didn’t even exist when we made the movie. If I could say one thing to the young people I work with, it would be that, God willing, it will always be that way. That it won’t be about what’s going to happen with this but just about being in the moment and being privileged at being part of something that’s such a good experience.”