The Walt Disney Family Museum just wrapped up their first Happily Ever After Hour virtual event with Disney Legend Bob Gurr. He answered questions from the hosts of the WDFM Podcast before taking questions from fans tuning in. There were over a hundred questions in the queue with only an hour to answer them and he couldn’t get to all of them, but with a GurrTiki in hand, Bob Gurr gave engaging and insightful answers. Here are ten things we learned from the virtual event. 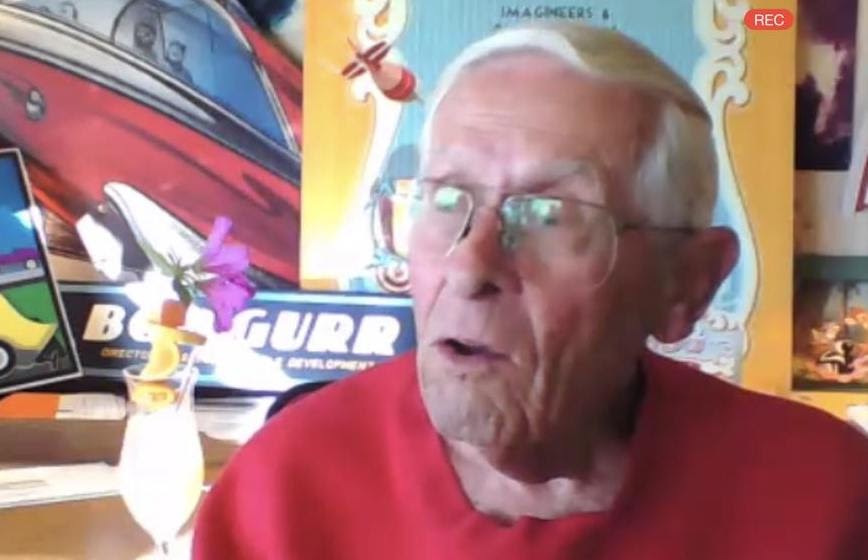 1. Is one side of the Matterhorn faster?

It turns out that neither side is necessarily faster, according to the coaster’s designer. However, they are both different because they both had to bend around each other to fit within the mountain’s cone shape. It was made before computers as well and he confessed to not being able to ride it anymore at the age of 88. His advice to fans is to pick the side they like best and stick to that, not worrying about which will give them the most ride time.

It’s a lot of fun, but also a lot of hard work. Gurr praised Leslie Iwerks and the team behind the Disney+ documentary series The Imagineering Story for showcasing the challenges that go into theme park design. Gurr has struggled for years to articulate it and now he can tell fans to go watch the show.

“He’s a god to so many people,” Bob Gurr shared about his former boss, “But the other side of him was he was just a regular guy who was bubbling over with ideas every day.” Gurr commented on Walt’s neck pain, which sometimes had the side effect of making him grumpy. But overall, he recalled how Walt Disney could walk into a room, take a look at something you were working on, come up with a better idea and send you off on a better assignment. “He was ordinary in his language, but he was a shocking inspiration in doing that. It was hard to see him as a god when I see him as a Walt.”

4. What is your favorite idea you had for Disneyland?

To this question, Bob Gurr stated that all of the ideas for Disneyland stemmed from Walt Disney… with one exception. Bob Gurr had the idea to bring a fire engine to Disneyland, which Walt Disney was quick to approve because he wanted one personally. Ward Kimball owned one and Bob Gurr believes that’s why Walt was excited to have one. When hosting VIP guests at Disneyland, Walt Disney was known to drive them down Main Street in the fire engine himself. So Bob Gurr’s only idea for the park is also his favorite.

5. Who was an Imagineer that Inspired You?

Bob Gurr came from a mechanical background and didn’t always understand the creative ideas happening at Imagineering. It was Rolly Crump who helped him understand the artistic side of theme park design. “He was very inspirational and talented.” Bob Gurr has several Rolly Crump items in his personal collection. He also mentioned that they both remained youthful into their old age, both becoming wacky old men who never really grew up.

6. Are there any projects that you ever said no to?

After leaving Disney in 1981, Bob Gurr started his own company. His secret to success was only accepting jobs that he could see a solution for. When Universal Studios in Orlando offered him $8 million to bring to life an attraction idea based on Steven Spielberg’s Jaws, he said no because the idea was too far out. Sure enough, the attraction as originally designed didn’t work and had to close within a few months, spending two years being redesigned by a different company.

7. What are your thoughts on the Rise of the Resistance ride vehicle?

“It’s really hard to top the previous guy with something that’s even more mind blowing,” Bob Gurr said about the current state of theme parks always trying to one-up each other. “It’s great when it works, but it’s really hard to get complex machinery to behave like it’s supposed to.” Adding to that, he brought up how Disneyland opened four new rides all on the same day in 1959, including the monorail, skyway, Matterhorn Bobsleds, and redesigned Submarine Voyage. Each ride system was different and complicated in its own way, creating some maintenance challenges that first year. “I kind of feel sorry for the guys that go so far out without the old guy wisdom.”

8. Are you currently working on anything?

Bob Gurr has been keeping busy, even before stay-at-home orders were put in place. He is currently hard at work on a new design for a scooter that will be available for rental in Orlando. My hope is that it has a soft front end so it doesn’t hurt as much when it hits your heels during peak traffic times on Main Street.

9. What is your favorite part of the Walt Disney Family Museum?

Bob Gurr brought up the first room of the museum where photos of Walt Disney’s family and artifacts from his life grace the walls. “It’s a very spooky feeling because Walt is in the rafters and he’s talking to me. It just stops me cold.” With that, Bob Gurr started to tear up like so many others who worked with Walt when they talk about him.

Okay, so this wasn’t actually a question. At the top of the presentation, Bob Gurr talked about his love of fancy-looking cocktails or mocktails and shared his own recipe. In case you’re wondering, yes, he did sip on it throughout the hour-long virtual event. 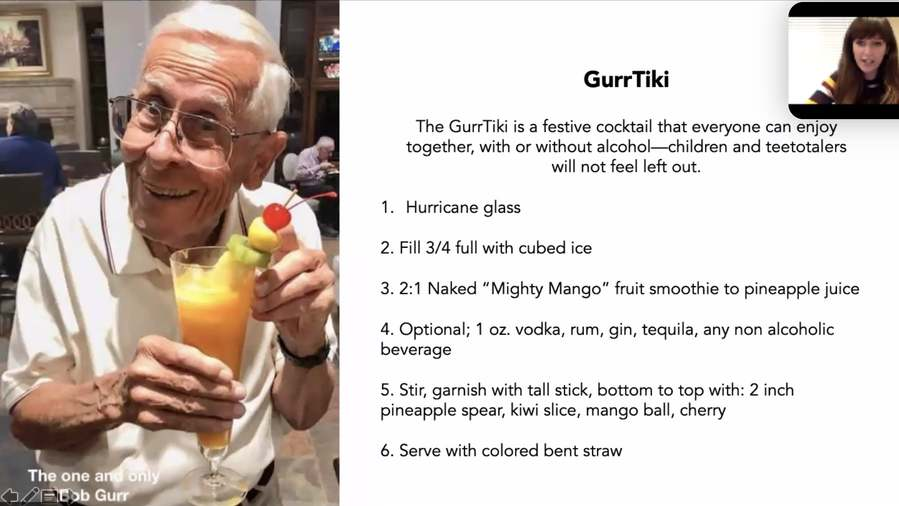 It was a lot of fun participating in the Walt Disney Family Mueseum’s first virtual event, part of the new Happily Ever After Hour series. Click here to see more of the scheduled events coming up in the future.