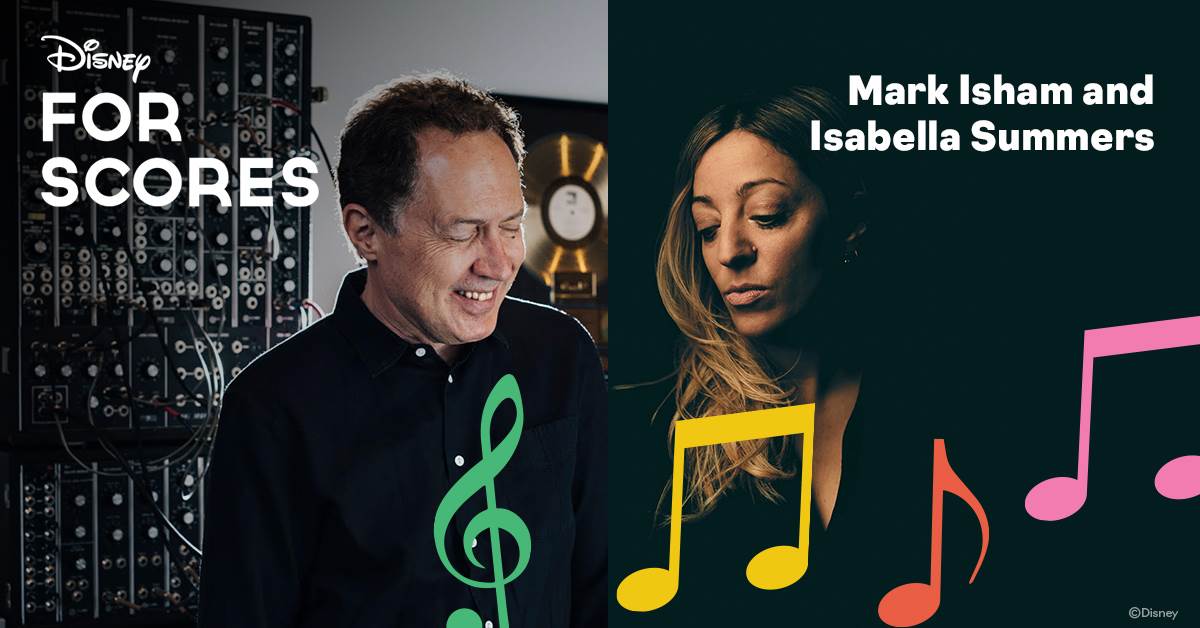 The newest episode of Disney’s For Scores podcast hosted by Jon Burlinggame brought together the award-winning collaborators behind the score for Hulu’s Little Fires Everywhere, Mark Isham and Isabella Summers. Mark Isham’s scoring credits include a variety of Disney productions including the TV series Once Upon a Time and Eight Below. Before working with Isabella Summers on Little Fires Everywhere, he wrote the score for the Disney+ original film Togo.

“My very first film, Never Cry Wolf, it really harkened back to those days,” the composer shared about scoring a new film set in a winter landscape with a realistic canine star. “You’re not just putting emotions into the dogs eyes, you’re also scoring this beauteous scenery and nature at its most gorgeous and its most threatening and the emotions that come. It’s a very similar film, but a chance to do it in a new language that I’d never quite worked in before. It’s all orchestral.”

Mark Isham also shares his personal reasons for scoring Togo in the episode. “That was a labor of love. I own one Siberian and my son owns another and the Siberian breed of animal has become very near and dear to me. So the story of probably the most famous Siberian of all is a great story and Ericson Core, the director, did a truly magnificent job. The look of this film is just breathtakingly beautiful and he got great canine performances.”

Isabelle Summers, who goes by the name Isa, is a singer, songwriter and music producer who has some big hits to her credit, including Florence + the Machine’s “Dog Days Are Over.” She wanted to get into film scoring and the opportunity arose for her to work with Mark to fulfill that dream when ABC asked her to help with the music for Little Fires Everywhere, which includes an original song by Ingrid Michaelson and covers produced by Isabelle summers.

Isabelle was used to collaborating on songwriting, but she was excited to apply her hit making skills to writing a score with Mark Isham, relocating from London, England, to Calabasas, California, to work with the composer. “We sat down together at Mark’s house in his wonderful studio and he said he would like it to be a true collaboration,” the artist shared. “That set the scene.”

In the episode, Mark explains that when you see two names on a score, it usually means that the writers wrote different themes. That’s not the case with Little Fires Everywhere, where the two sat together and wrote every piece as a duo. “What you really want is like a great band where it’s greater than the sum of its parts,” he explained.

Their approach to the score was heavily influenced by the character of Izzy who plays the violin. “One of the first things we had to do is prep some on camera work for Izzy because she’s on camera playing the violin,” Mark shared. “The producers felt it should be an organic score, they didn’t want anything electronic.” The score ended up being driven mostly by strings. One of the exceptions to the digital rule was a plugin that makes a piano sound like it’s burning, inspired by a shot in the opening of the series as the Richardson house is burning.

Iasbelle brought with her a drum background and was hoping they could get a live drummer for the score. Mark shared that percussion is often digital in scores for TV shows due to budget limitations and he wasn’t convinced they needed live drums. It’s the one thing they fought over, but Isabelle won and he agrees that she was right. The drums in the score are more prominent than usual, making the score sound more contemporary.

Since this was a miniseries, they were able to go back and tweak the score on episodes as they needed. Their attempt was to have a story arc in the score in addition to the narrative. You can listen to the full episode on your favorite podcast app. The soundtrack to Little Fires Everywhere and Togo are available from digital music providers.