It’s summertime and during any other year thousands of kids across North America would be packing up for summer camp. Since COVID-19 has pretty much ended most if not all summer camps, ‘To Touchstone and Beyond’ celebrates this time-honored tradition with Hollywood Pictures 1994 film, Camp Nowhere. 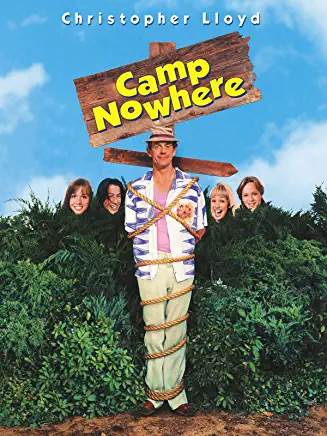 Middle school students Morris, Zack, Trish, and Gaby played by Jonathan Jackson, Andrew Keegan, Marnette Patterson, and Melody Kay, are close to the summer holidays but they have a problem. They are all being pressured by their parents to go to summer camp again, which none of them wants. Morris comes up with a brilliant plan to solve their problems. The kids enlist the help of former drama teacher Dennis Van Welker, played by Christopher Lloyd. The kids have Dennis impersonate a representative from a fictional summer camp and he convinces the parents to let their children attend. The parents think their kids are going to prestigious camps, while the kids know they are doing their own thing under the ‘supervision’ of Dennis. The ruse works so well that word starts to spread to the group’s friends, and soon, dozens of kids want in on the scheme.

Finding a rundown lakeside lodge, Morris leads the group to their new ‘summer camp’ with no parents or authority figure, except Dennis. Here for the next two months the kids spend the summer away from their parents, and relationships start to form.

Naturally, the charade can’t last long, as a local state trooper, played by Tom Wilson, starts to wonder about all the kids coming into town and where they are coming from. The curious cop, a debt collector, played by M. Emmett Walsh, searching for Dennis who has outstanding debts, and an elaborate parents’ day at the camp collide and bring the kids’ charade crashing down to reality.

Christopher Lloyd gives his best in every scene. Watching him act out four different roles to the parents in order to convince them to let the kids go to the ‘camp’ is brilliantly done and allows a genuinely talented and funny actor like Lloyd to shine. He throws himself into the scenes with gusto which lets the audience sit back and enjoy while the wool is pulled over the eyes of the unsuspecting parents.

Much of the film rests on the shoulders of Jonathan Jackson. Morris is the center of the story and drives the plot throughout the film. Jackson does a great job at keeping the plot going, but also playing off well against Christopher Lloyd. Jackson is likeable and the audience will root for his Morris.

All the parents in this film are horrible. Not only are they awful to their kids, they are all one dimensional and reinforce a common stereotype about parents in film that they don’t know their kids and are out of touch with the interests of their own children.

Tom Wilson doesn’t get enough to do in the film. I wish he and his Back to the Future co-star Christopher Lloyd had more screen time together.

Skip It! I wish I could say that Camp Nowhere is an enjoyable film. It’s predictable, and the film seems very uncertain about its own identity. At the beginning we seem to have a story about four kids who are trying to escape from their parents and enjoy their summer. Once the film makes it to the camp, we see an attempt to build a relationship between Jackson and Lloyd that never really fleshes out, and then the movie ends with the lead actors mauling each other in cringe worthy scenes. It seems like the film tried to veer into the teen sex romp, when that’s not what the previous one hour and twenty-nine minutes were about.

Camp Nowhere is available on Disney+. Check it and see if you agree with me.

Next week, in celebration of the release of Hamilton on Disney+, we look back at another Broadway smash that got a film treatment, Noises Off.