Iron Man VR has been released for PlayStation VR (PSVR), and I for one am glad to see my favorite superhero come to the virtual reality platform. I have been waiting for at least two years to find a game that is engaging and entertaining like Iron Man VR. Enjoying the freedom of flying around like a superhero is a wonderful experience that cannot be replicated on a regular game console. 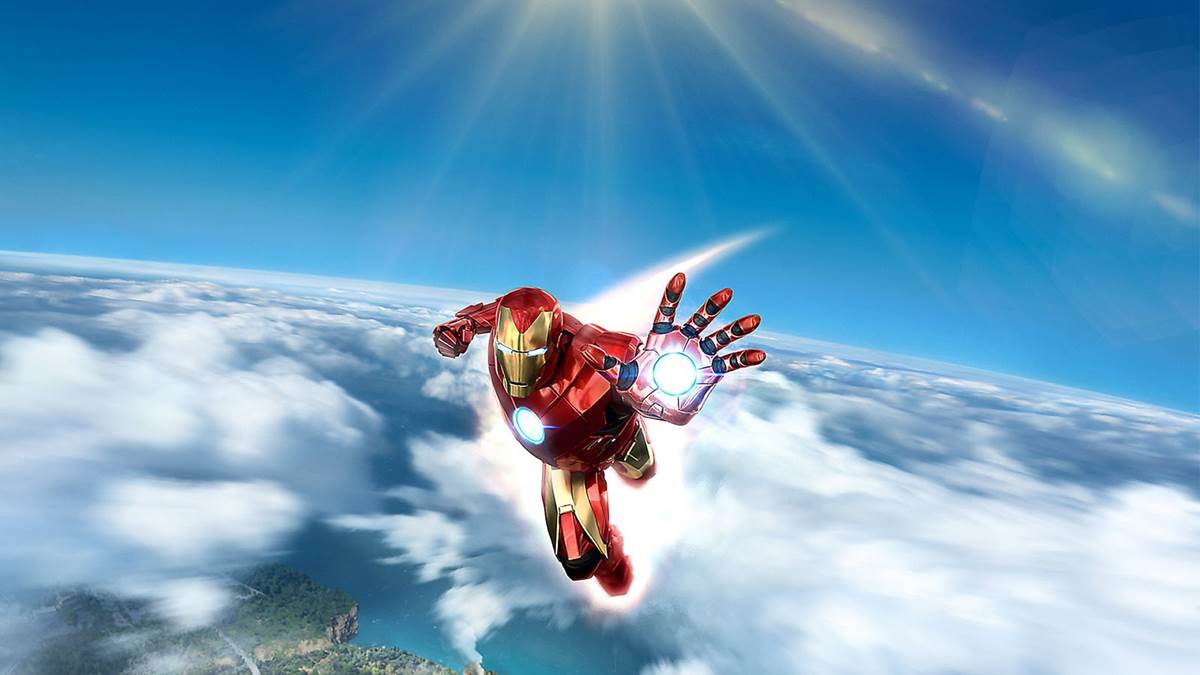 As the game begins, the player is brought into the world of Tony Stark who is looking to make a change. He renounces his past of being a weapons manufacturer and admits to the world that he is Iron Man. The player dons the armor and begins a test flight outside of Stark’s mansion. This is right from the demo version of the game, and once you complete the preliminary tests, we journey into the mansion for dinner with Pepper Potts.

Five years later, Iron Man is a hero and Tony Stark is lauded for his good work. While flying home with Pepper on the company plane, Stark and Potts are attacked by renegade Stark weapons drones. Potts is injured in the attack and Tony wants revenge. He reactivates his old AI program Gunsmith to help solve the riddle of who wants to kill him. With Gunsmith and F.R.I.D.A.Y, his AI personal assistant, working around the clock Stark pursues clues around the world and discovers that it is Ghost who wants to kill him.

For me, a PSVR game needs to be more than just a shooter game. If I am going to put a virtual reality helmet on and spend fifty bucks for a game on this platform, I want it to last, and I want it to be an experience. If you are expecting a simple straight up button mashing shooter game with a controller, Iron Man VR is not the game for you. If you want a PSVR game to be an experience that is like walking onto the set of a film, then you will love Iron Man VR.

The prologue of the game allowed me to have a fun tutorial level that enabled me to get familiar with how to fly in the Iron Man suit. From the opening moment to tinkering in the garage and adding modifications to the suit, gamers will enjoy living in the world of Tony Stark. 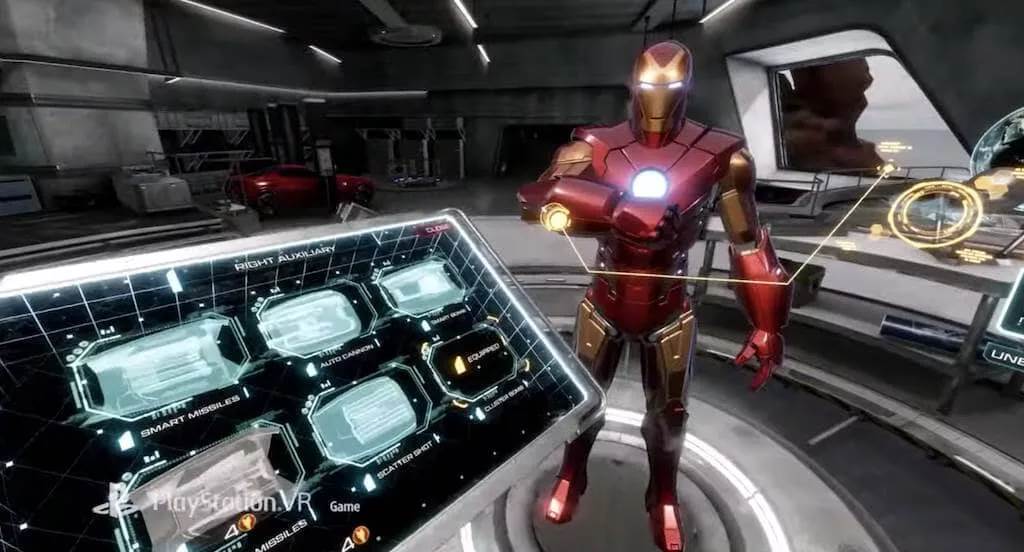 Iron Man VR requires you to practice. I found it relatively easy to maneuver around while I was interacting with others as Tony Stark, but when you are in the middle of combat flying around Shanghai as Iron Man the story and expectations are intense. From tanks and flying drones, you spend a lot of time in combat, and it can become overwhelming. I found doing the flying practice rounds around Stark mansion multiple times to be helpful in mastering my use of the suit.

If you have never played a game in virtual reality before, placing one of these headsets over your eyes and then spending time on your feet can be exhausting. By the time you reach chapter three of Iron Man VR, your wrists will start to hurt from using the PlayStation Move wands. It’s not a serious pain, because I remember how much my thumbs would hurt after playing Mario Bros. on the original Nintendo, but your wrists will need a break periodically.

Tinkering in the garage with Gunsmith and F.R.I.D.A.Y., you get to live in the luxury of Tony Stark, and it’s fun. The storyline is fun and if you have never seen an MCU movie or read a Marvel comic, gamers will be able to follow the story with ease. While the game says you can safely play the game while seated, if you are assuming the role of Iron Man, you need to stand. It makes it easier on the wrists as you launch missiles at countless enemies that want to kill you.

Before you play, stretch your legs. You get a lot of leg action during the game and the calve muscles will be feeling the strain (I know mine did). You do have moments to recuperate between the chapters of the game. It takes a few seconds to load between the levels and I found this to be a useful time for me to sit down and rest. 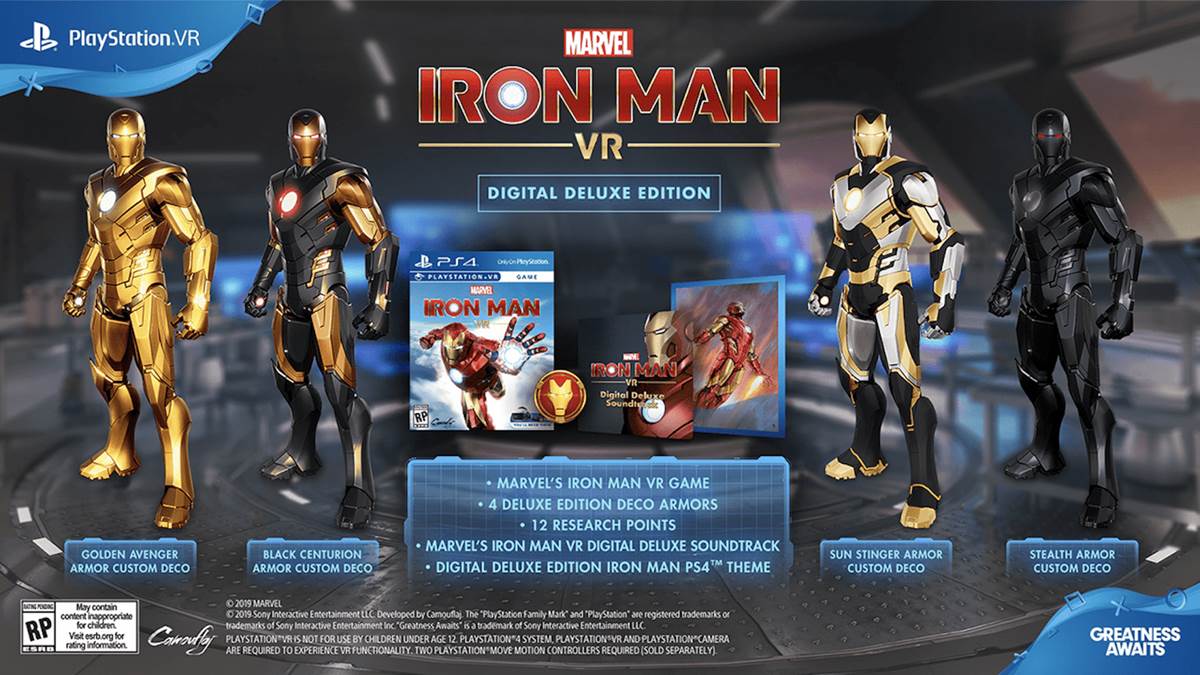 Iron Man VR is the first PSVR game I have bought in over a year, and it’s worth every penny. The game gives you the escapism you need, a Marvel storyline that is predictable but enjoyable, and the pure joy of flying like Iron Man. For once I can confidently say “I am Iron Man”.