Screenwriter John August recently stopped by the Walt Disney Family Museum for their Happily Ever After Hours speaker series. His work includes Disney’s live-action retelling of Aladdin, Fox Animation’s Titan A.E., and multiple collaborations with Tim Burton including Disney’s Frankenweenie and other projects like Big Fish, Charlie and the Chocolate Factory, and Corpse Bride. Here are 10 things we learned from John August. 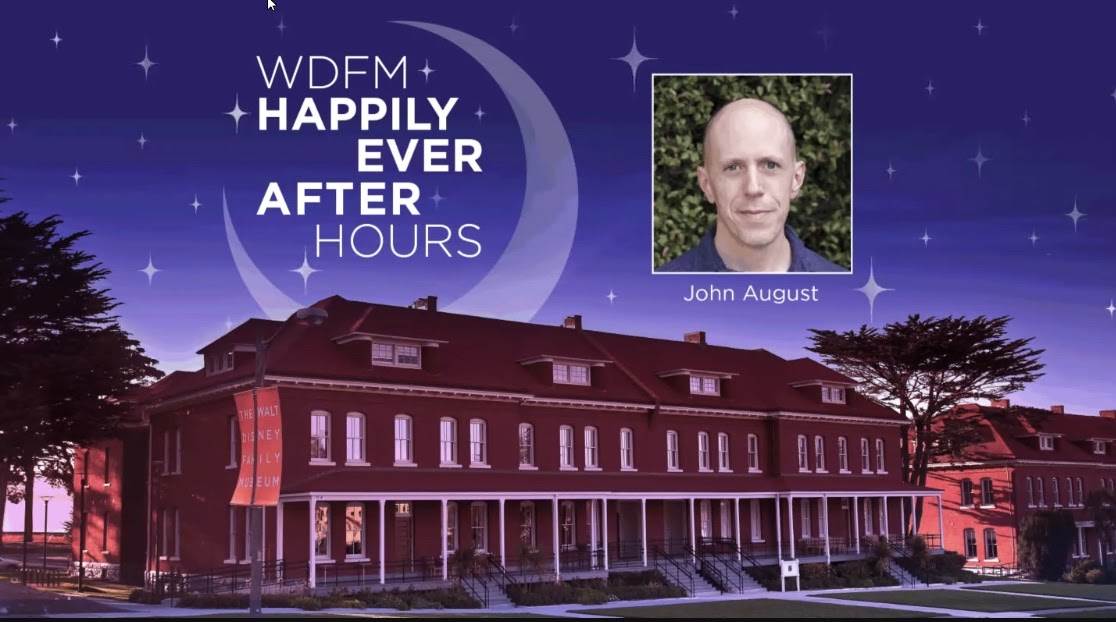 1. His passion for writing started when he was a child.

“I’d always been a writer,” John August explained. “From a very young age I was writing stuff.” Writing kids stories as a child led to a journalism major in college. “Journalism felt like a really safe and natural career path.” But John’s career ambitions took a bit of a detour while still remaining within the boundaries of his love of writing. “Journalism and screenwriting have a lot in common,” he shared about the structure of both storytelling mediums. “I realized pretty early on that it wasn’t what I wanted to do as a career.”

2. A 20th Century Fox movie established his love of screenplays.

“For me, it was the movie The War of the Roses,” the writer shared about the film that inspired him to want to learn more about screenplays. “It was the first movie I remember watching on VHS end-to-end and I started writing down things people were saying along the way.” In the days before the internet, that was the only way for John to have a screenplay of the Michael Douglas/Kathleen Turner comedy film. When he was in college, a published production journal from the Miramax film Sex, Lies, and VIdeotape gave him his first look at a real screenplay which caused him to change his major and his school. “One of the big draws at USC was they had a big library [of screenplays] and you could check out two at a time.”

“Every collaboration with a director is very different,” John August shared, explaining that some stick to the script while others are very involved in the writing process. In the case of Tim Burton, a screenwriter is treated like a production head. “Big Fish was our first collaboration. I’d already written the script and we had a different director on board. Steven Spielberg was supposed to direct it and then he dropped off.” On his first Tim Burton project, the only script changes were ones that conformed to budget limitations. He will often be on set with other directors, but with Tim Burton he usually isn’t called back until the post-production phase. “With Tim on that movie and with everything else we’ve done, when there’s a cut of the film to look at, I can look at it with fresh eyes and give him notes.”

4. John’s Approach to Writing for Animation vs. Live-Action.

“The general process in animation is that you’re writing a script but rather than it going off to actors and a director to shoot it, it’s going to storyboarding.” On films like Corpse Bride, Titan A.E. and Frankenweenie, story changes happened during storyboarding and then John would rewrite the screenplay. “You get an extra crack at trying stuff out before you’re committed to a look.” Most animation projects continue to tweak and change the story while it’s in animation, but with stop motion, the script has to be locked in because it’s much harder to redo a scene.

5. He won’t be writing for Pixar anytime soon.

“I’ve talked to writers who work at places like Pixar and they love it, but they talk about spending two days working on one scene and I could never handle that.” John August shared that the Pixar and Disney Animation process of writing an animated feature is more grueling than he prefers and he’s also a hermit at heart, preferring to sit alone in a room and just write.

6. He writes music, but it doesn’t always appear in the film.

“When you’re writing an actual musical like Corpse Bride, when I started it wasn’t a musical.” It was John’s idea to add songs to the film. “I had to go to Tim to say I really need some songs to help condense the story together.” In the case of Corpse Bride, John August worked directly with Danny Elfman and shares a writing credit on the songs. “What I’ve classically done, I just write the songs and I know the songs are going to get swapped out at some point… The same thing happened with Aladdin. I wrote some new songs and then Alan Menken swapped them out.” John August’s songwriting skills were applied to the film version of Big Fish, which also allowed him to work on the Broadway adaptation.

7. He refers to his writing process as “Disciplined Daydreaming.”

“In general, when I approach the day’s work I’ll go in with goals of the things I want to have written, the scenes or the sequences I want to have written,” John shared about his approach to writing. He will often do a general outline and sit and think through a scene before he attempts to write it. “I’m a big believer in looping, which is where you envision the scene in your head and try all the versions of it and film it inside your head and then do a scribble version, the handwritten version of what it’s going to look like.” After that, his work starts to look more like a screenplay in the traditional sense. “And then starts the real crafty part of figuring how the sentences fit together and not repeating words and for a movie, you repeat that about a hundred times because movies have about a hundred scenes.” He says that while Hollywood is full of examples of a successful film being written hastily over a single weekend, that’s very rare and most take a long time to create.

8. He Never Saw the Original Screen Adaptation of Charlie and the Chocolate Factory.

“I had never seen the Gene Wilder version,” John August shared about the Roald Dahl classic that became the 1971 musical classic Willy Wonka & the Chocolate Factory. “I had no idea what happened in the Gene Wilder version, so when Tim [Burton] asked me to do it, Tim said don’t watch it.” His approach was more of a straightforward adaptation of Roald Dahl’s classic book, one that heavily inspired him as a child. “The stuff I added to it was really looking at the nature of the protagonist/antagonist relationship between Willy Wonka and Charlie to help tell that story.” In both the book and Tim Burton film, Charlie is a perfect character, whereas the musical gave him flaws requiring him to grow and change during his factory tour. “The question of the story is how can Charlie get Wonka to grow up, so that informed all of the decisions I made.”

9. He started the Scriptnotes podcast before the format was popular.

“Having a weekly conversation about the job you’re doing is really therapeutic,” John August shared about why he started the long-running Scriptnotes podcast before the medium really took off. “Having to talk through what you do, you recognize your own patterns and the patterns of other people… As challenging as putting the words on a page can be, the process that’s not on the page in terms of getting stuff made and building relationships has been some of the most edifying part of this for me.”

10. Jennifer Lee was a guest on Scriptnotes.

“We sat down with Jennifer Lee, who wrote and directed Frozen, and we really did a deep dive on Frozen and the process of figuring out that story,” John shared about a Disney-centric episode of Scriptnotes. “What I loved about that conversation was the recognition that you don’t always know what you have when you’re doing it. You’re just steering your ship in a certain direction and trying to sell people on where that ship should go.” In John August’s view, Frozen is responsible for pushing the animation medium forward.