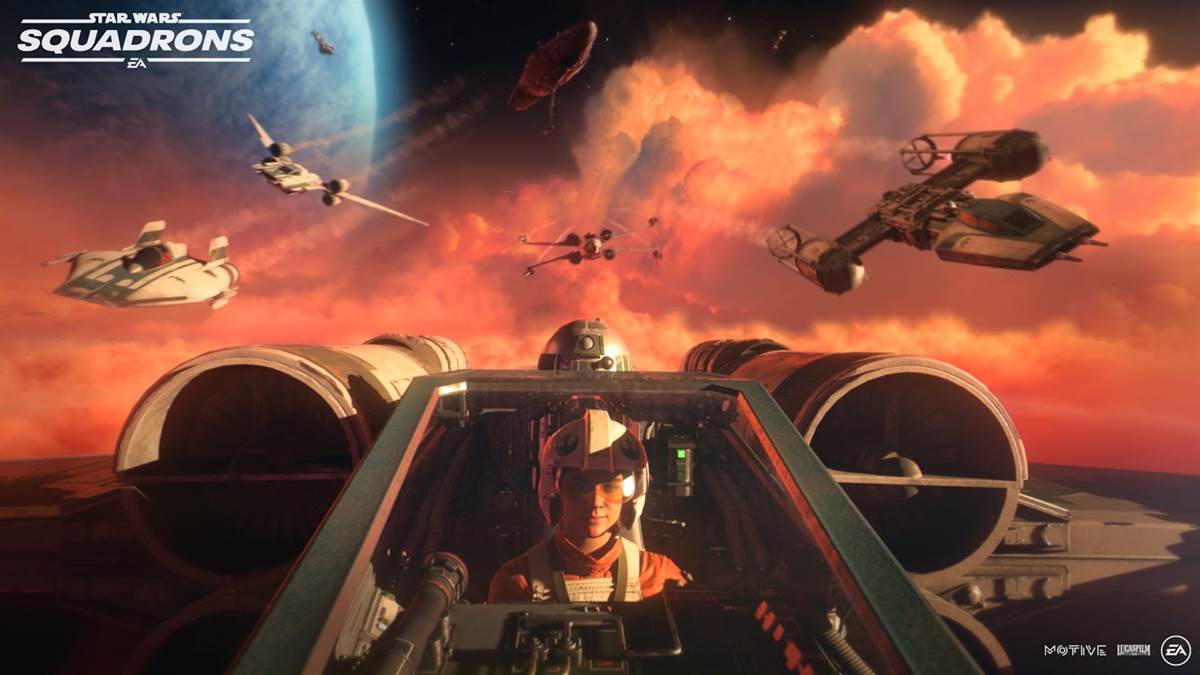 Growing up as a teenager in the 90s, two of my formative video games were the flight / space combat simulators Star Wars: X-Wing and Star Wars: TIE Fighter, which offered fans of George Lucas’s space opera epic to sit in the cockpits of famous starfighters on both sides of the Galactic Civil War.

Now, more than 25 years later, Lucasfilm Games has partnered with publisher Electronic Arts and developer Motive Studios to create Star Wars: Squadrons, a modern update on the same concept set firmly within the current-era Star Wars canon. I spent this past weekend playing through the single-player campaign of Star Wars: Squadrons (on the “Pilot” difficulty level) and I had a great time with the game.

Like many video games of the past couple decades, players can customize their characters’ appearances (there are two protagonists, one for each faction), though the outcome of that customization doesn’t really matter in single-player mode, as you don’t often– or ever, really– have the opportunity to see yourself. You do hear your persona’s also-customizable voice, however, as your pilots will react to certain in-game situations or moments with a quip or call for help from their wingmates. Missions alternate between the Empire and New Republic, but not one after another. Sometimes you’ll be a “good guy” a few times in a row, and sometimes you’ll fly for the Imperial remnant for a little while.

As would be expected, each mission is interspersed with cutscenes that progress the story of Star Wars: Squadrons, which concerns the development of a New Republic superweapon called the Starhawk and Imperial efforts to destroy and/or disable it. Familiar characters such as Rogue Squadron leader Wedge Antilles (voiced here by actor Denis Lawson, who played the role in four Star Wars movies) and General Hera Syndulla (Vanessa Marshall) of Star Wars Rebels fame join newcomers like Imperial Officer Terisa Kerrill (Peta Sergeant), defector Lindon Javes (Phil Morris), ace pilot Varko Grey (Noshir Dalal), and a cyborg who can best be described as “Evil Lobot”– complete with goatee– LT-514 (Alistair McKenzie).

Fans of the recent Star Wars novels and comic books will be thrilled to see Admiral Rae Sloane brought to life for the first time on-screen (voiced by Dionne Audain), and getting to know the individual members of both squadrons can be a real treat in optional dialogue interactions between stints in their respective starfighters. And as for the gameplay itself, I will say that I mostly had a lot of fun while piloting my X-Wing, A-Wing, TIE Fighter, and TIE Interceptor around a variety of backdrops. There are also support vessels like the U-Wing and the TIE Reaper and bombers like the Y-Wing and… well, the TIE Bomber. The latter two groups are a little tricker to master than the fairly straightforward fly-and-shoot controls of the others, but I imagine getting better at each will be rewarding over time.

Missions consist of assaulting targets, escorting allies, defending assets, and generally just blowing up a lot of opposing ships. As stated above, the basic of flying and shooting are pretty easy to get ahold of, but there’s a somewhat steep learning curve when it comes to the more advanced controls of shifting power between ship systems, transferring energy to forward or aft shields, using the targeting wheel, and special moves like drifting. By the end of the campaign I felt I had a decent handle of some of these things, while still admittedly being completely lost at others. I can only guess that devoting a good amount of hours to the also-included multiplayer mode would help develop and refine these skills as well.

I did encounter a couple of major bugs in Star Wars: Squadrons during my play-through of the main campaign: in two separate missions my progress was hindered by the game getting hung up and not advancing to the next stage after I had completed all assigned tasks, and in one of these cases all allied and opposing ships froze in mid-space instead of flying to their next goals. In both of these cases I was forced to exit out of the mission and reboot my Xbox One console to get the software to correct itself, as retrying the mission from my most recent checkpoint did nothing to alleviate the problem. This proved reasonably frustrating because of how much time I had already devoted to each objective, but I was eventually able to get past those points in the game and finish out the full campaign.

Overall, I think Motive Studios has done a terrific job in delivering what fans would want and expect from a current-generation Star Wars space battle simulator. The visuals and audio effects are all authentic to the franchise, and participating in familiar scenarios like an all-out assault on an Imperial Star Destroyer is a genuine thrill. I haven’t yet dived into the multiplayer mode but I’m sure that’s a hoot as well. Over the past year EA has been building up a decent track record with its Star Wars games (like the also-excellent Jedi – Fallen Order) and as a fan I’d love to see that trend continue.