TV Recap: Just Roll With It – “The Most Wonderful Crime of the Year”

Disney Channel premiered a new episode of Just Roll With It on December 11th, which also happened to be a holiday episode. Titled “The Most Wonderful Crime of the Year,” the live show where anything can happen and the audience choses what comes next got extra holly and jolly. Here’s what happened on this brand-new episode. 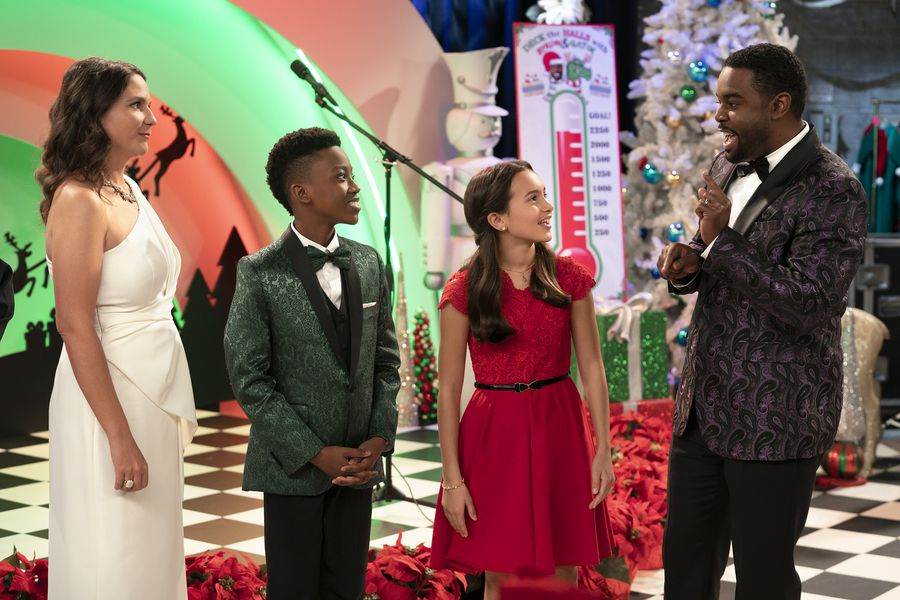 Beatz 101 is hosting a charity Christmas telethon event and Rachel is in charge. Under so much stress, she became mean to everyone, telling the production crew they couldn’t use the bathroom until everything was perfect for the show.

While preparations are underway, Blair reminisced about her favorite Christmas present as a child and the first audience vote was to choose what it was. The audience chose a reindeer, with Blair opening a giant box with a man in a reindeer suit who led her to another gift, a sleigh that drives itself. Once inside, the sleigh crashed her into a wall and fake snow fell on top of her.

Owen is obsessed with a detective mystery book that he can’t put down while Byron starts to get jealous over Svon the Magnificent, a magician Rachel booked for the telethon who happens to be her ex-boyfriend. While the braggadocious Svon does tricks for the other performers in the greenroom, Blair throws him Owen’s book, which he turns into an ornament.

But disaster strikes just before the show starts when Svon reveals that all of his magic tricks have been destroyed and everyone’s a suspect. Blair was mad because Svon wouldn’t tell her how the tricks work, Byron was jealous of Rachel’s ex, Owen was upset about his book being destroyed, and Gator seemed jealous that Rachel wouldn’t let him do his magic tricks during the event. Inspired by his detective novel, Owen decides to try and solve the mystery.

With an act to fill at the last minute, the audience voted on what Rachel and Blair would do between plate spinning, a trampoline act, and a mascot dance. The trampoline act won, with both characters trying to decorate a giant Christmas tree with velcro ornaments while bouncing.

Meanwhile, the disgruntled crew called the police and an officer showed up to shut down the show because it’s now considered a crime scene. Owen announced that he knew who destroyed the tricks as the horn blared and the audience got to vote again between one of the show’s main characters or a mystery. The mystery won and it turned out to be the crew member that Rachel wouldn’t let go to the bathroom. The officer explained that this was a bigger crime and she should take her in, but since it’s Christmas, she let Rachel off with a special punishment called a “Festive Facesmasher,” a whipped-cream ornament that fell on her face!

In the end, Beatz 101 had a successful telethon, earning more for their fundraiser than they dreamed of and giving the network big ratings!

This new episode of Just Roll With It will re-air this month on Disney Channel and can also be viewed in the Disney Now app.