Especially nowadays, if one were to ask “What’s your favorite Disney movie?” odds are you aren’t going to hear “The Aristocats” as an answer. That’s not to say it won’t ever be said. Every Disney film is someone’s favorite Disney film.  There are people out there who genuinely love it, it’s just not typically one that a majority of folks might pick, especially when compared to the princess classics like Cinderella, or Snow White and the Seven Dwarfs, or even any of the renaissance films like Beauty and the Beast, Aladdin, or The Lion King. 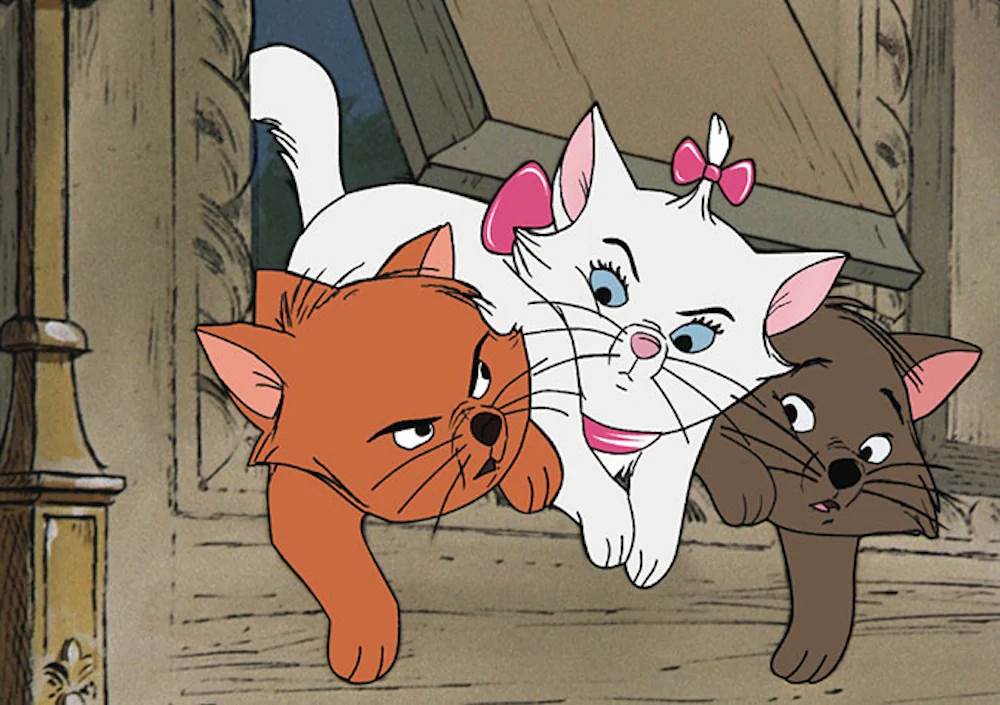 50 years ago today, The Aristocats was released in theaters. Devotees will know that I usually write about a tumultuous backstory regarding the production, which The Aristocats did not have. Instead, I’ve compiled some of my favorite pieces of trivia and fun anecdotes regarding the 20th Full-Length Animated Feature Film from Walt Disney Animation Studios. 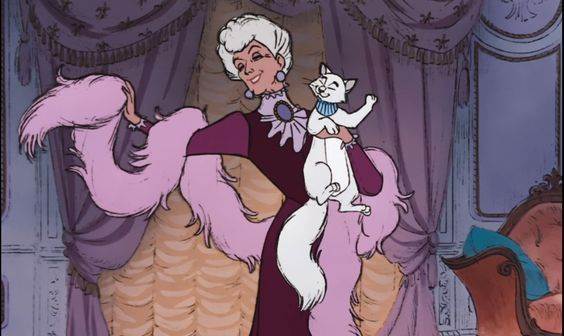 The Aristocats is Inspired by a True Story

The first film to be entirely completed after the death of Walt Disney, The Aristocats tells the story of a family of aristocratic cats, and how an alley cat acquaintance helps them after the butler Edgar catnaps them to gain his mistress' fortune, which was meant to go to the cats. This is actually inspired by the true story of a group of Parisian cats that inherited their owner’s fortune in 1910. Now, this specific instance is proving very difficult to find more information about, however to this day, the practice of leaving money and objects after one’s death to their pets is one that still occurs. The story was originally intended to be a two-part entry into The Wonderful World of Disney, but before his death, Walt Disney suggested that it might work better as an animated feature. Directed by one of Walt’s “Nine Old Men,” Wolfgang Reitherman, the animated film was the first to not have any direct input (aside from the suggestion of animation) from Walt Disney himself. Many consider this to be one of the major flaws of the film, citing it as one of the weaker entries from the studio as a whole as it sometimes comes off disjointed and lacking, especially when compared to 101 Dalmatians which was released prior and had a different story but similar plot points to The Aristocats. Not to mention the infamous use of “recycled” animation that sadly became a bit of a trademark of Director Woolie Reitherman. See Also: Robin Hood. 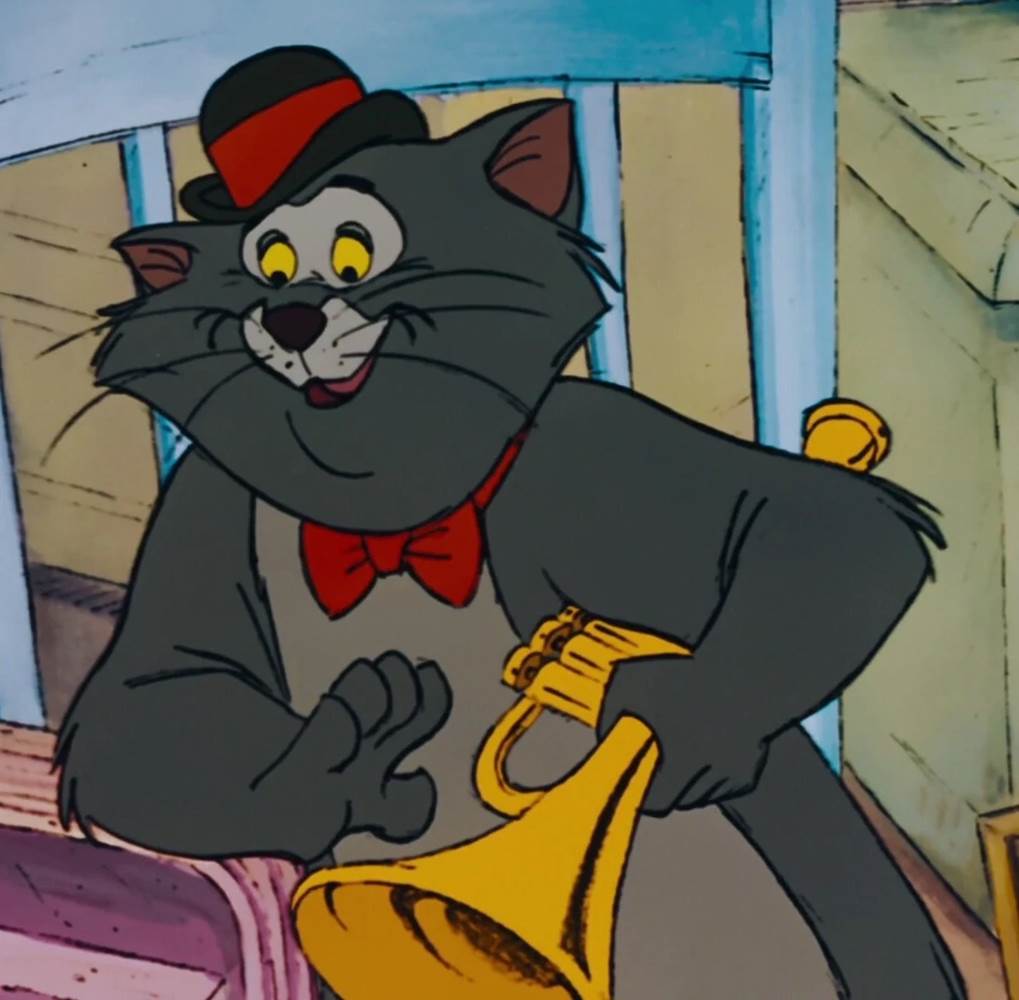 Scat Cat Was Originally Intended to be Voiced by Louis Armstrong

Though the film is set in 1910, and Jazz wasn’t introduced to France until after World War I, the music style plays prominently in The Aristocats. The character of Scat Cat, originally named “Satchmo Cat” was intended to be voiced by legendary jazz musician Louis Armstrong. The Walt Disney Studios had a strong working relationship with the musician. He would play at Disneyland aboard the Mark Twain, as he did in the Disneyland After Dark special, and even made an album of covers of classic Disney tunes, called Disney Songs The Satchmo Way in 1968. 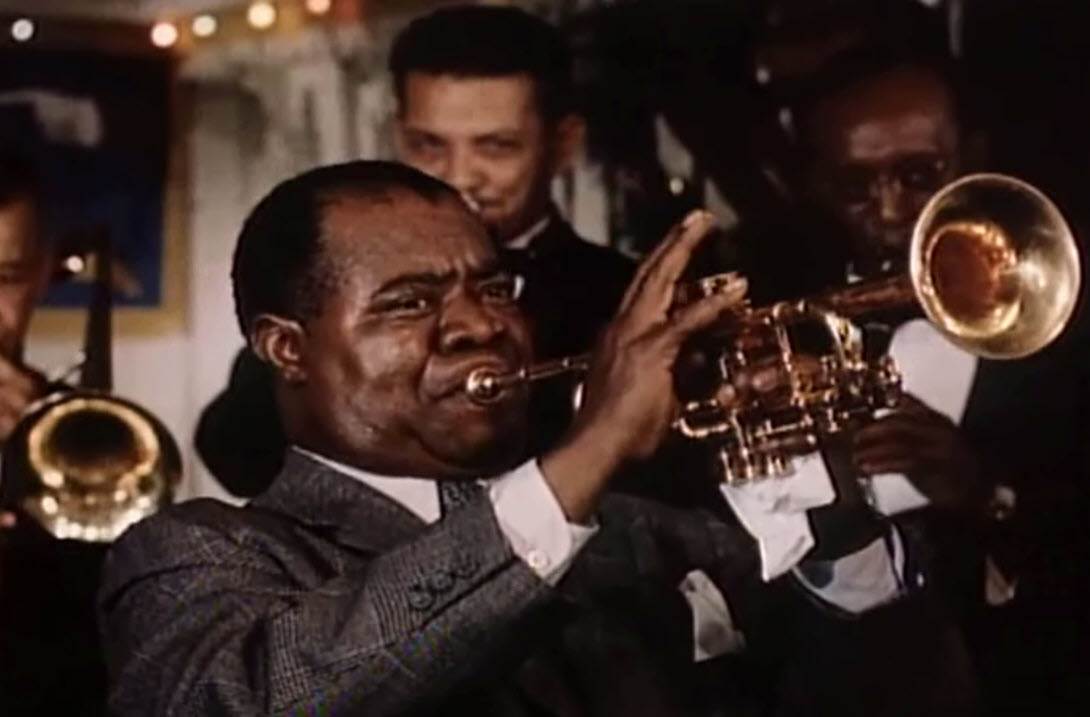 The character was even designed to resemble Satchmo himself, specifically the way they animated the character playing the trumpet, and notably, a gap in his teeth that is remarkably similar to Armstrong’s. Reportedly, It was only because he fell ill and was unable to record the dialogue that he was not able to take on the role in the production. The team, however, was so excited that they made the character a larger part of the story and gave him his own jazz number. When Scatman Crothers took over the role, the character’s name was changed to Scat Cat and the song “Everybody Wants To Be A Cat” was introduced. Crothers was allegedly told in recording sessions to “pretend that you’re Satchmo.” The song has become an anthem for the film and Scat Cat has become one of the more popular characters from the production, and even has a lounge named after him at Walt Disney World’s Port Orleans Resort – French Quarter, Scat Cat’s Club. 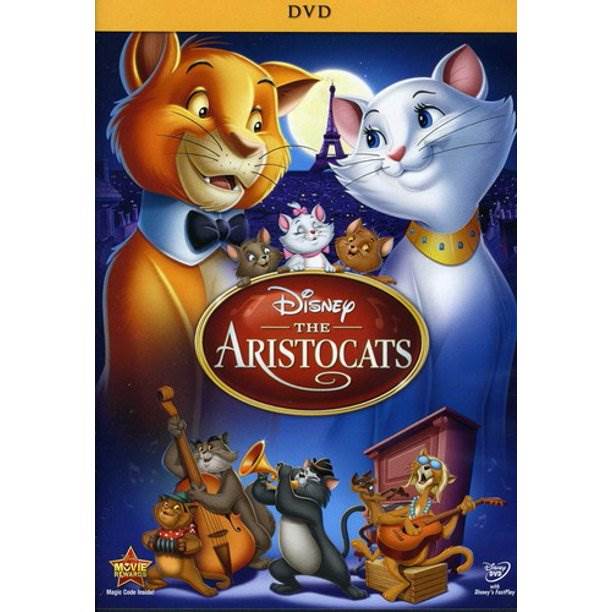 The Aristocats II Was Cancelled

In the early-mid 2000’s, a slew of direct-to-video sequels to the classic animated films were made. The sequels were primarily produced by DisneyToon Studios, and not the Walt Disney Animation Studios, then known as Walt Disney Feature Animation. They were lackluster in both story and animation quality and came off as simply a cash grab to exploit the home video and DVD market, especially when you look at the fact that Walt Disney said he never wanted sequels to the animated movies. In fact, the first sequel ever from the world of Disney animation was in 1990, well after his death, with the theatrical release of The Rescuers Down Under. The Aristocats 2 went into production in 2005, set for a direct-to-video release in 2007/8. It was actually the acquisition of Pixar Animation Studios that played a significant role in this story, as part of that deal saw then-head of Pixar John Lasseter take over as Chief Creative Officer of all branches and arms of Disney Animation and put a stop to the direct-to-video sequel trend. This stopped The Aristocats II dead in its tracks. Allegedly the film was having script and story trouble from the beginning, so we don’t even know what could have been with this film, and probably a big reason why Lasseter had no problem shutting the production down. We mentioned another of Walt’s “Nine Old Men” earlier, Wolfgang Reitherman, but let’s talk about another, Eric Larson, for a moment. Larson worked on everything from Snow White and the Seven Dwarfs to Cinderella. For the early days, you name it, and he worked on it. For The Aristocats, Larson served as a character animator, contributing to the characters of Roquefort, the Kittens, and Scat Cat. These were major endeavors for him and his primary focus for the film. Although this wasn’t the last film he would ever work on (that would be The Great Mouse Detective) it was the last film he was significantly involved in, as he had acquired a taste for teaching. It was after The Aristocats that he began to reduce his animating role at the studio, dropping to side characters for Robin Hood, animating less and less before reducing his role to “animation consultant” on later films. Why? He started focusing on teaching and started a  recruitment program that would bring new talent to the studio. We can thank Larson for not only giving us Scat Cat, Marie, Toulouse, and Berlioz, but after The Aristocats, bringing us animators Glen Keane, John Lasseter, Brad Bird, Tim Burton, Randy Cartwright, Ron Clements, Andreas Deja, Mark Henn, John Musker, Joe Ranft, Henry Selick and so, so many others. 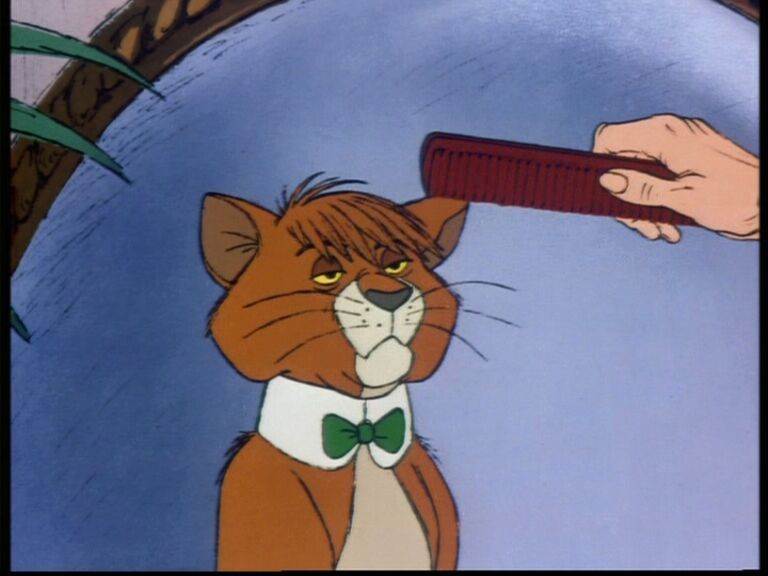 Voiced by Phil Harris (who also provided the voice of Baloo in The Jungle Book and Little John in Robin Hood), Thomas O’Malley is the street smart alley cat (echoes of Tramp in Lady and the Tramp) who helps Duchess and her kittens throughout the film. Fans of the movie are quick to point out that Thomas O’Malley (despite a famously wrong answer on a game show) is not his full name. His full name would be Abraham DeLacey Giuseppe Casey Thomas O'Malley, the alley cat. Now, I am not one to promote fan theories as they are usually a stretch and tamper with the original vision of the story. Just take a look at what Frozen did to Tarzan that had to literally be addressed as wrong in Frozen 2. That could be an article in itself, but there is one theory that is heartwarming, doesn’t change the plot or story of anything else, and has a bit of an origin that I can actually get behind that explains O’Malley’s name. The theory states that this could be a combination of the different names that different “owners” of O’Malley have given him throughout his life. Even Duchess at one point jokes that his name "cover[s] all of Europe". It’s not a complete stretch, Giuseppe being Italian, Casey and DeLacey Gaelic, O’Malley Irish…. The life of an alley cat could have taken him around the countries of Europe for sure. Isn’t it just possible that sweet people in these countries saw the cat, fed him a few times giving him a nickname maybe before he moved on to somewhere else? I’d like to think so. O’Malley also has the very unique distinction of being the first Disney Step-Dad. Duchess already had her three kittens when they were all adopted by the Bonfamille family, they weren’t his own, which brings us to our last bit of fun trivia about The Aristocats: 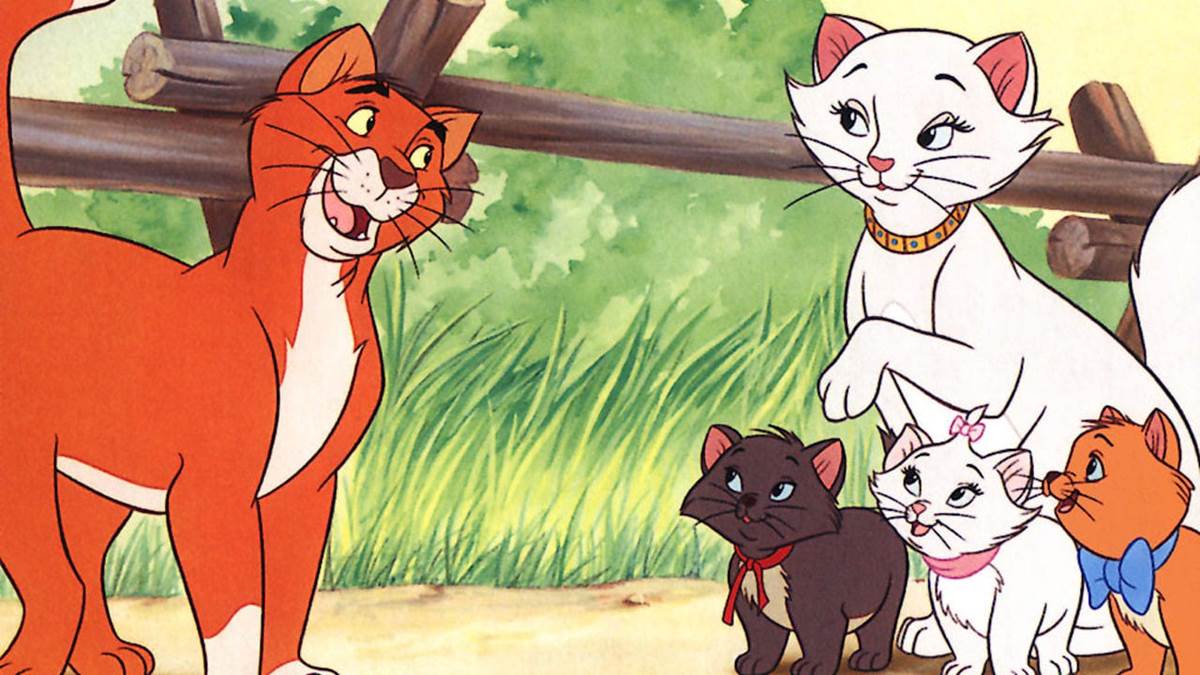 Popularly known as the Hays Code, after Will H. Hays, president of the Motion Picture Producers and Distributors of America (MPPDA) from 1922 to 1945, The Motion Picture Production Code was a set of industry guidelines for the self-censorship of content that was applied to most United States motion pictures released by major studios from 1934 to 1968. The Production Code spelled out what was acceptable and unacceptable content for motion pictures produced for a public audience in the United States. The film industry followed the guidelines set by the code well into the late 1950s, but during this time, the code began to weaken owing to the combined impact of television, influence from foreign films, controversial directors pushing boundaries, and intervention from the courts, including the US Supreme Court. In 1968, after several years of minimal enforcement, the Production Code was replaced by the MPAA film rating system. The full specifics of the Hays Code are way too long to get into here, but essentially if it was (at the time) considered lewd, immoral, illegal, or ethically wrong, It shouldn’t, or depending on the severity of the offense, wouldn’t be shown on screen. While other animation studios had the code strictly enforced upon them, notably the Betty Boop character and several Looney Tunes shorts, Disney typically was never censored for violating the code, part of what gives them the squeaky clean reputation they have today, though later fare would also change with the times. One notable example is The Adventures of Ichabod and Mr. Toad. The Disney adaptation of the story portrayed Toad as being framed for theft, whereas in the book (and all future adaptations), he actually does steal the motorcar. And theft is ethically wrong, and illegal, so a hero/good guy shouldn’t be doing it. The Aristocats allegedly would have raised numerous eyebrows if it were in production much earlier, while even though animated, the implied intent to harm animals (similar but different to 101 Dalmatians) and the lack of answers regarding where Duchess’ children/kittens came from would have put it in questionable territory of the Hays Code. Others have pointed out that each of the kittens is a different color, possibly implying three different fathers as well, also a violation of the Hays Code, especially without explanation. Lady and the Tramp sees Lady and Tramp have children, after they are living in the same residence together, implying some kind of marriage, with puppies that look like them after that. Hollywood was a different place once upon a time, and The Aristocats came at the tail end of it. Despite what controversy it may have kicked up (if at all) if the code were in place at the time, it retains an MPAA G Rating, the first Disney Animated Film to receive one.