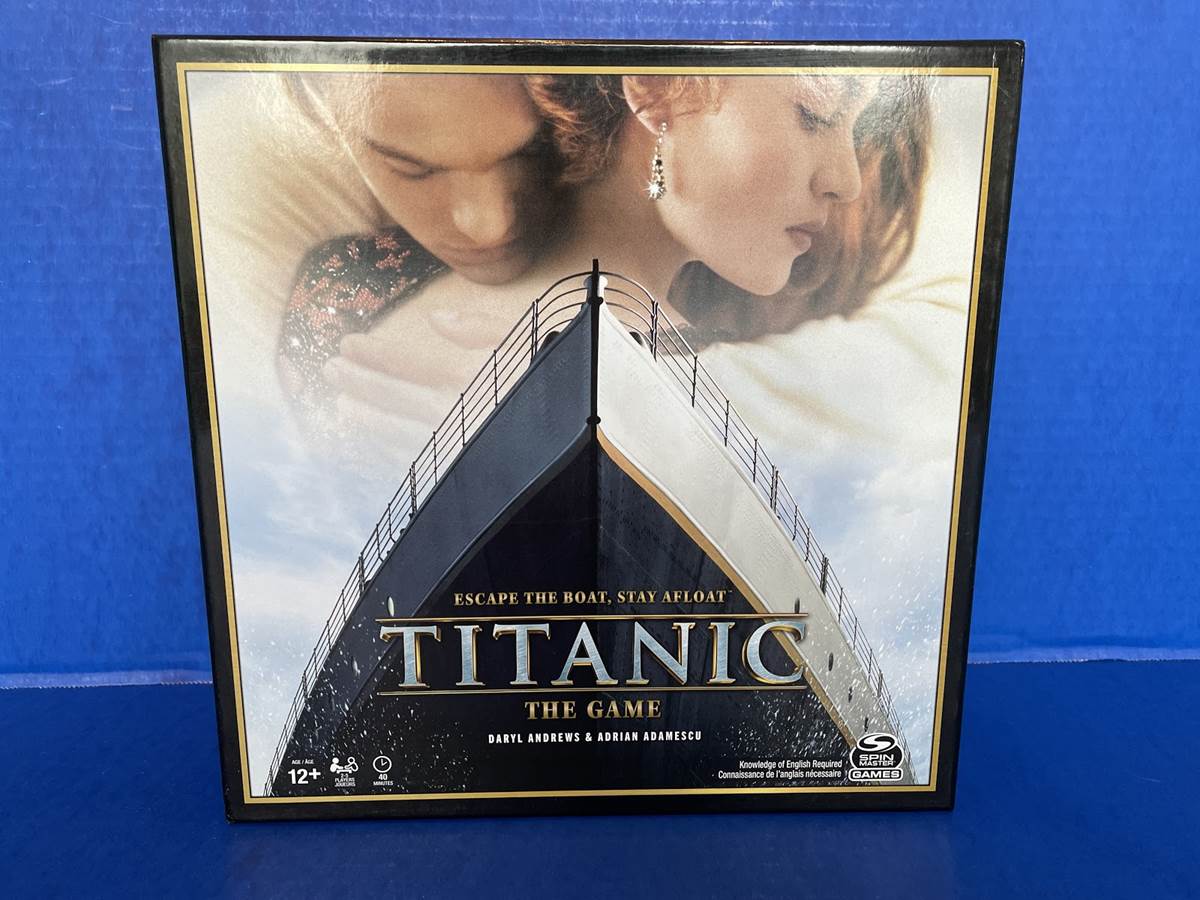 James Cameron’s Titanic has a heartbreaking ending, one in which Rose is separated from her true love Jack, whom she will only meet again in the afterlife. But what if that wasn’t the case? In Titanic: The Game from Spin Master Games, the ending might be different. Inspired by the blockbuster 20th Century Studios film, this game puts players in the role of mostly fictional characters from the film. The game board featured the decks of the Titanic with tiles showing the rooms within. Choosing a character, players start at the bottom of the ship and strategically working their way up as it fills with water. The goal is to help as many passengers as possible to lifeboats to earn points and to get to the last lifeboat before the ship sinks. 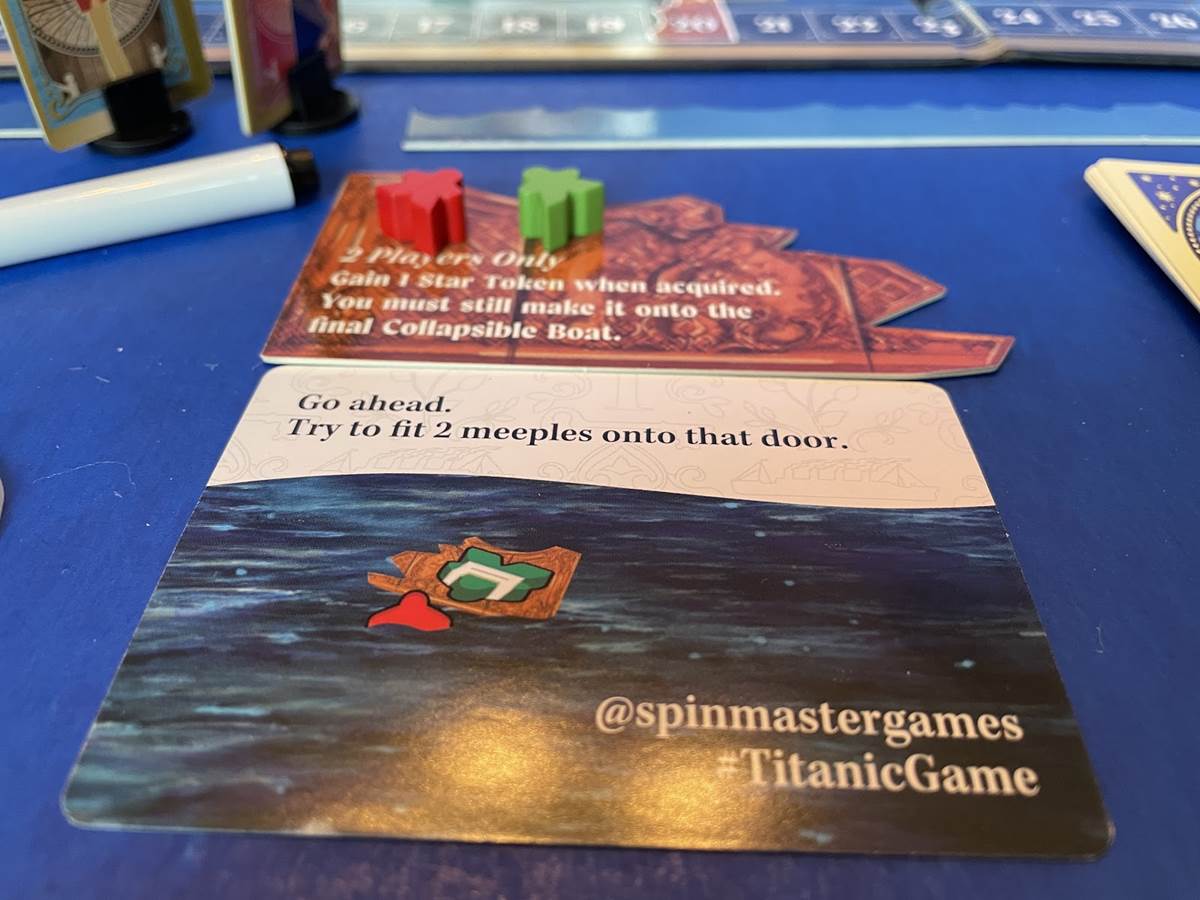 In addition to characters from the film, there are items that aid players including the broken door and the heart of the ocean. One of the cards is actually just a joke because that door totally could’ve saved both Rose and Jack and everyone knows it. Playable characters include Rose, Jack, Cal, Ruth and the Captain, the only character from the film inspired by a real person aboard the ship. Not using dice, slidable action cubes are used to keep track of the number of actions a player can make during a turn. Each character also has a special ability they can use by flipping over their portrait and the also have two lifesavers on hand to help save passengers with the ability to acquire three more as they move through the ship. 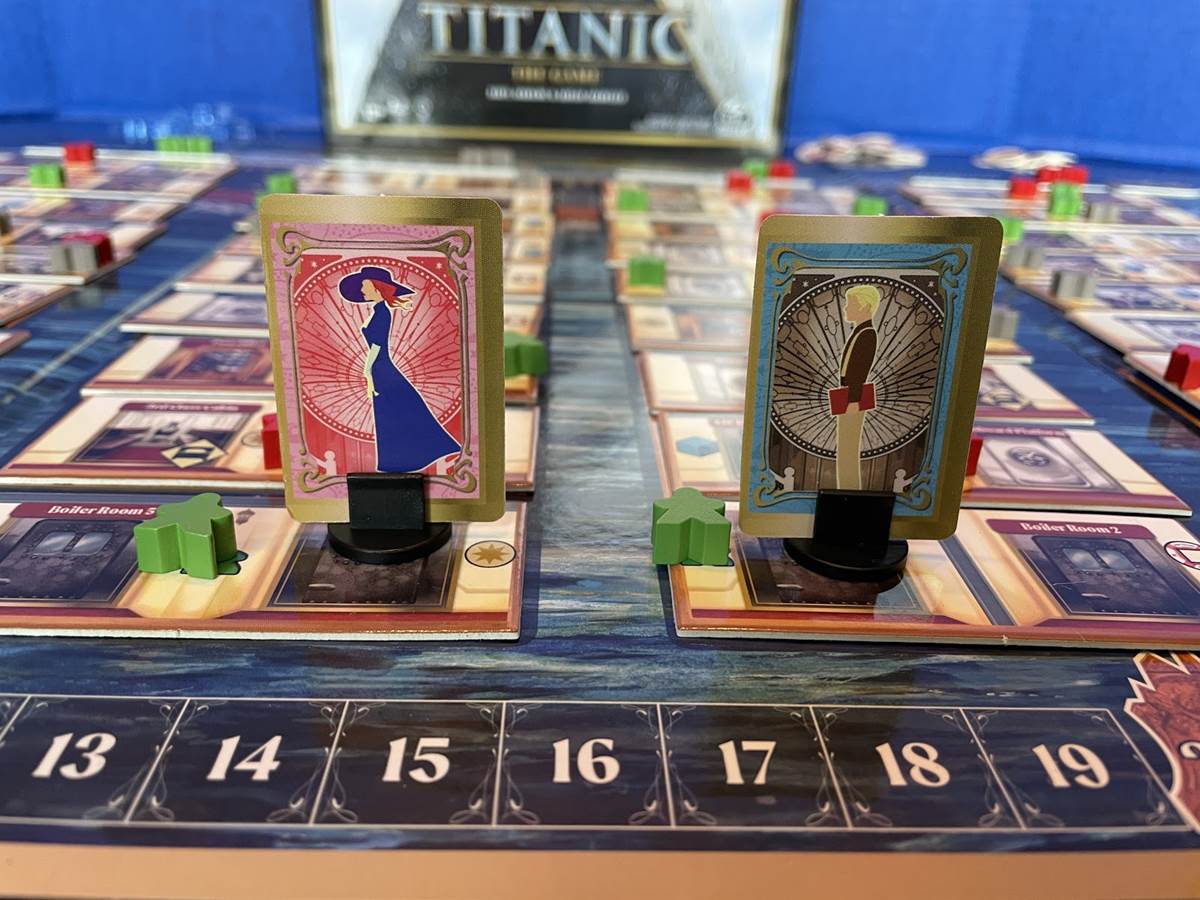 There isn’t a specific starting spot, so players can choose any room in the lowest deck to start the game from. There is a definite end space, though, the last collapsible lifeboat on the top deck, which is also the last one to depart. 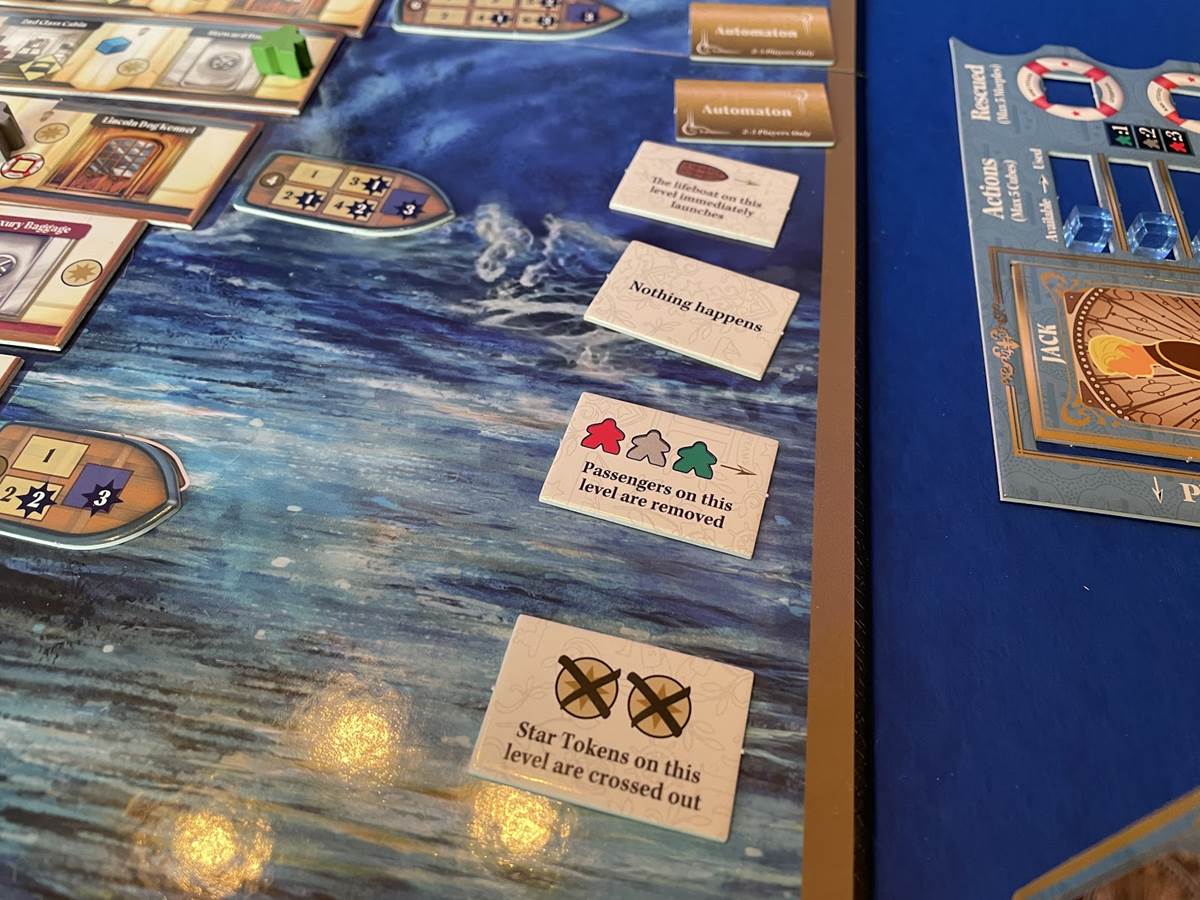 The rules change slightly depending on the number of players. If you’re playing with 2-3 players, Automation tiles are arranged with one on the side of each deck. At the end of each of the 9 rounds in the game, the next one is flipped over, which makes the game a little more challenging. If you have 4-5 players, this isn’t necessary as there are enough players to make resources scarce. Another variable is the door, which has two sides. In a game with more than 2 players, the door itself can be used as a life raft by the person who gets it (achieved by being the first player to get 20 points) and it essentially makes them invincible against drowning. In a 2 player game, the life raft gives the player an extra star token, which can be redeemed for a star card. The heart of the ocean also changes hands, being held by the player with the lowest amount of points and granting them a bonus action every turn. During each player’s turn, they first use all their actions, which reset on their next turn, then draw two flood cards to find out which compartments will be filled with water, and lastly, they can exchange any star tokens for star cards. These can be played during their next turn and there are four categories. Some of them make the game extra fun by requiring the player to reenact a moment from the film for bonus points, while others allow players extra actions or points for doing things. 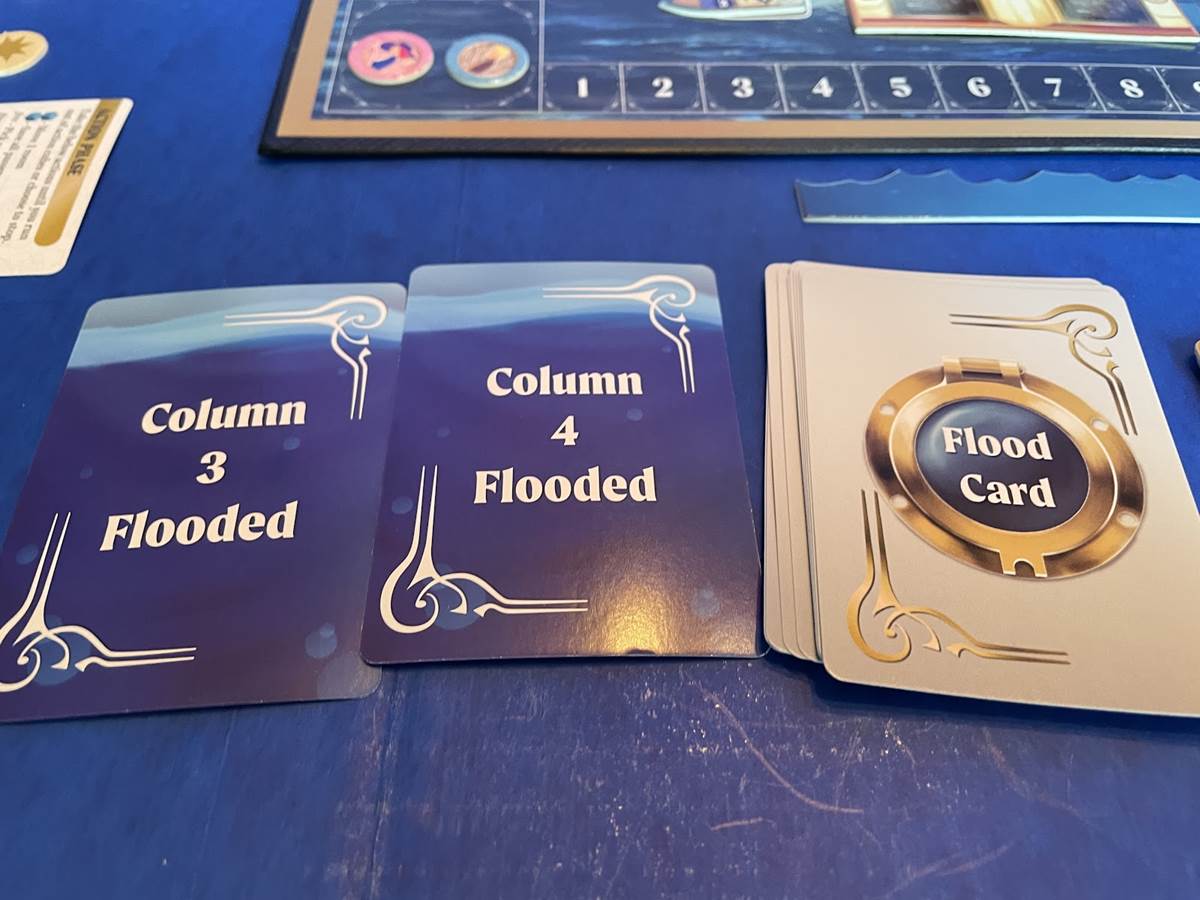 Every turn, two flood cards are drawn. That means the ship is going to fill up with water pretty fast, with most games lasting just 40-minutes. 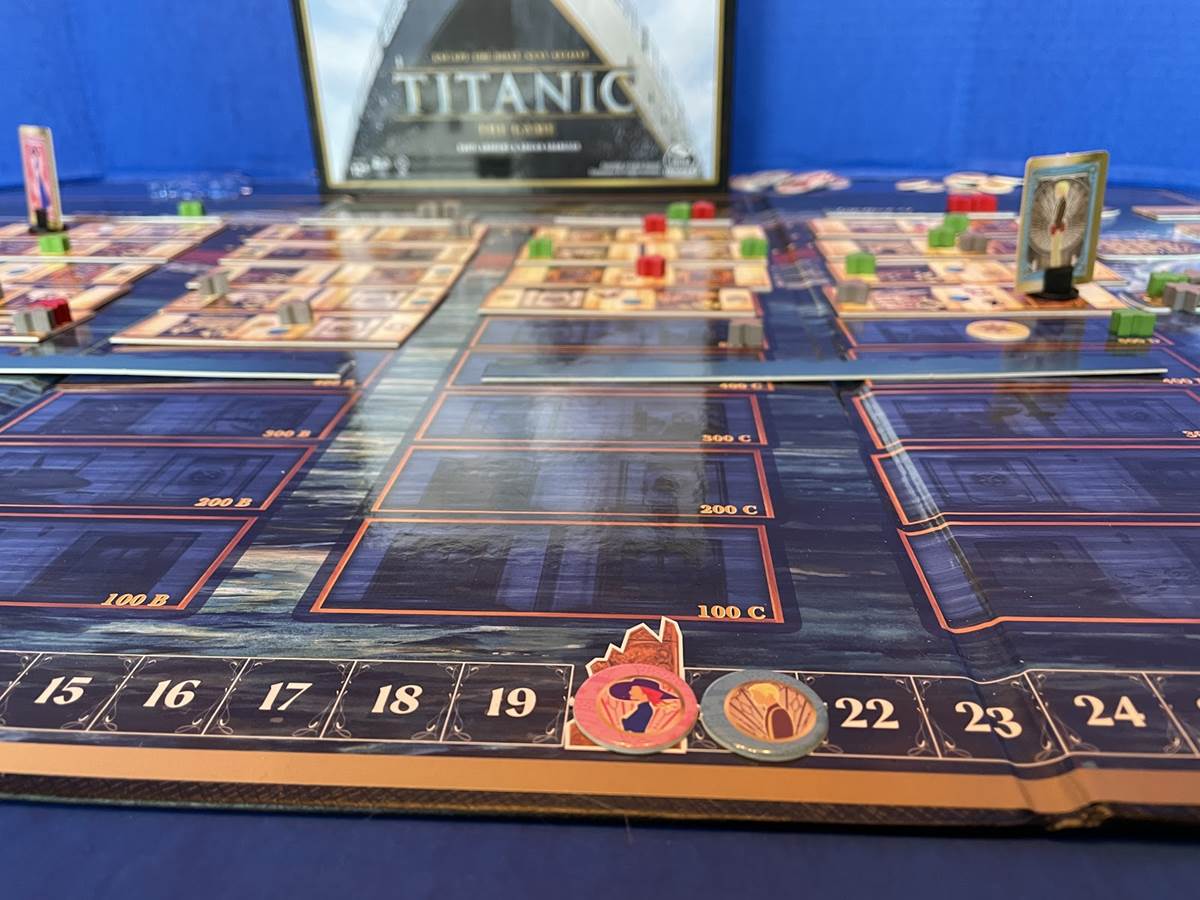 As entire decks are eliminated their tiles are removed and a waterline indicator slides up the board. A player can’t really be out of the game until the last deck sinks if they don’t make it to the last lifeboat, but you do lose points if you’re on a deck that completely sinks. There’s 1 lifeboat on each deck and they launch when they’re completely full or when that deck sinks. This means that as the water rises, players lose opportunities for points because getting passengers safely onto a lifeboat is the fastest way to earn them. You can also load one of your action cubes, which look like blocks of ice, onto a lifeboat for bonus points. With 35 score-keeping spaces on the bottom of the board, it is sometimes necessary to go over. Flipping your character’s score disc over adds 35 and you start over at 1 to go higher. 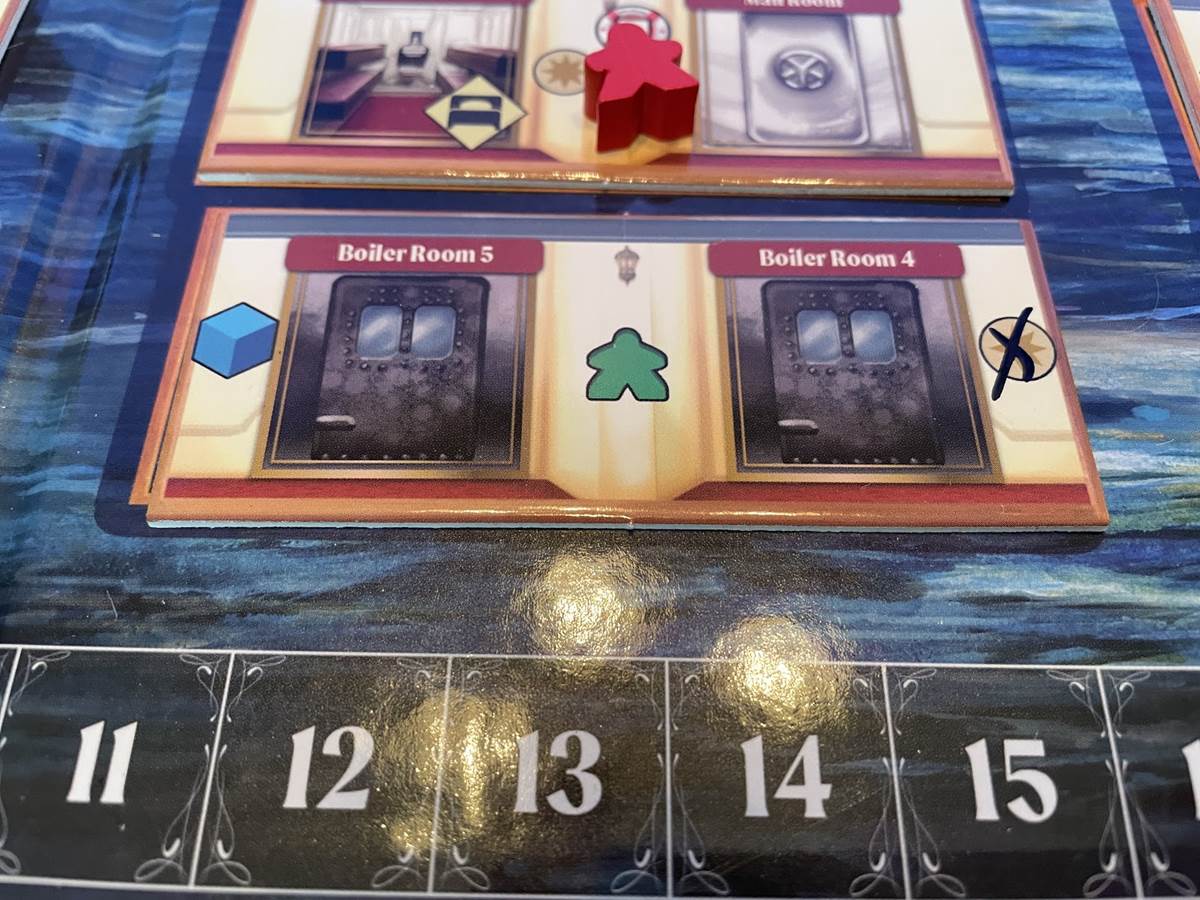 Wooden meeple, which stand in for first, second and third class passengers, are placed on the tiles. Other items that can be picked up are action cubes, star disks and lifesavers. Using the included dry erase marker, players cross off one of these extra items when they’ve been claimed from a room. Some rooms also have a sealed wall or ceiling, meaning a player has to go around the barrier and can’t pass directly through it, which complicates things. The tiles can be arranged in any order on the same deck, so the ship’s layout can change each game to keep it more exciting. 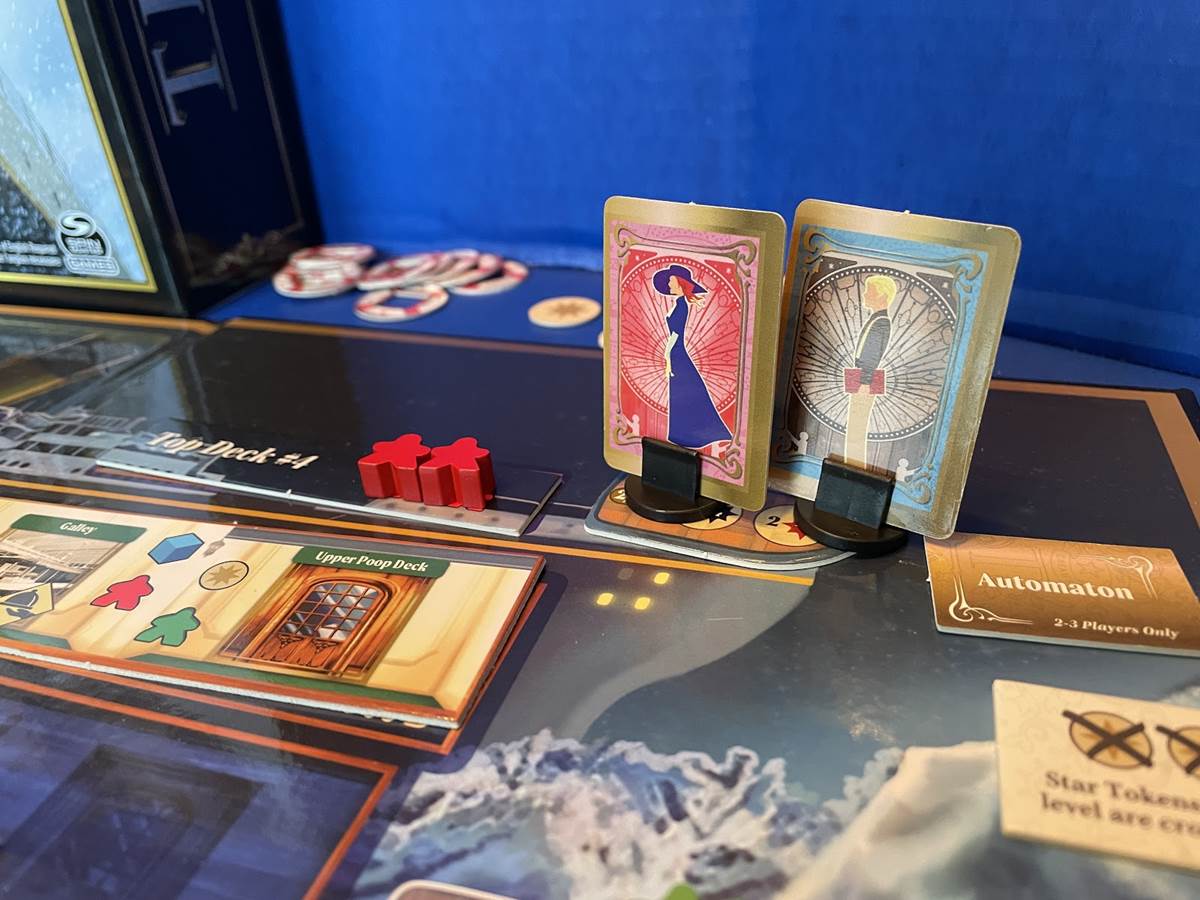 While you can play as other characters, in a 2-person game, Rose and Jack will probably be facing off against each other. In this alternate universe, we found that both Rose and Jack made it to the last lifeboat before the ship sank. They probably made lots of babies and watched them grow. 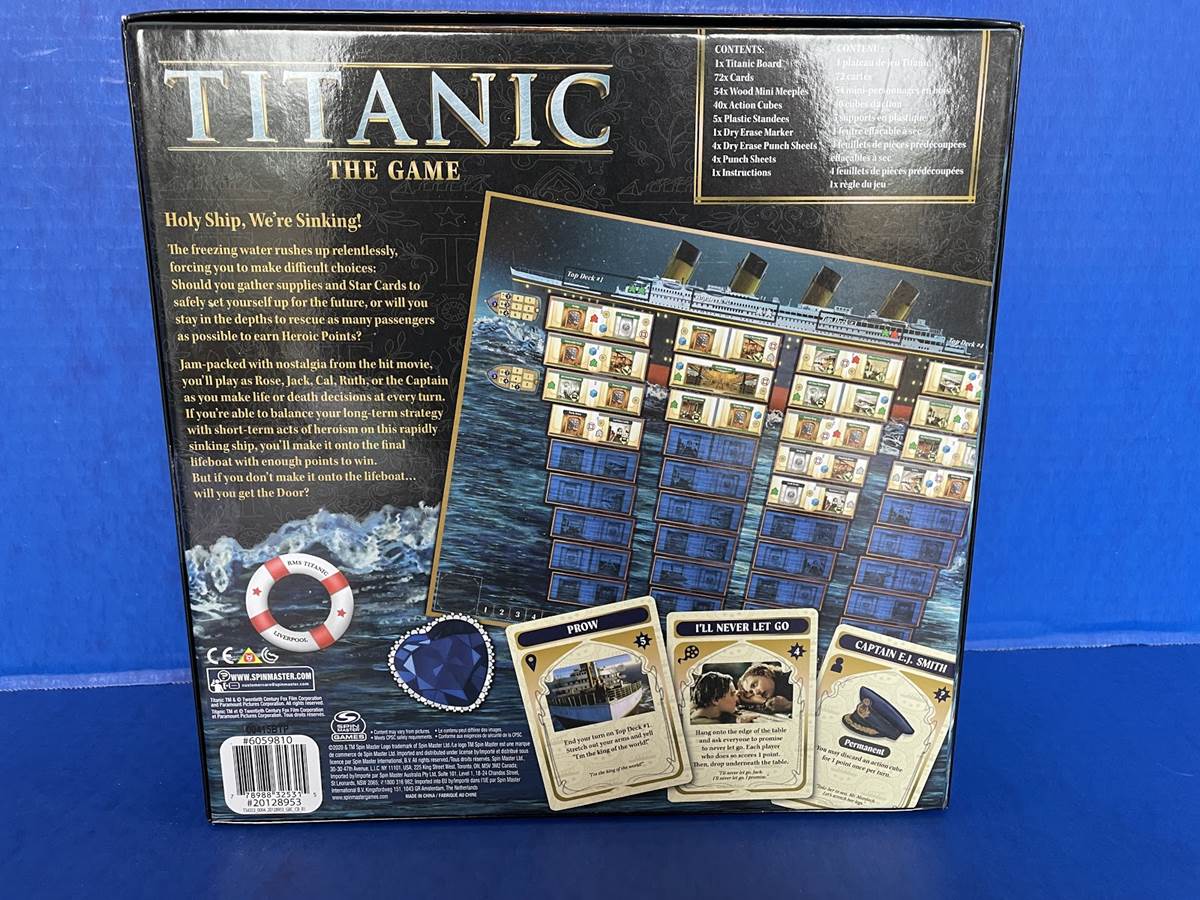 Titanic: The Game is now available, perfect for a night in with friends and family. Based on one of the most iconic motion pictures of the 1990’s, it’s sure to bring back fun memories while creating brand-new ones. 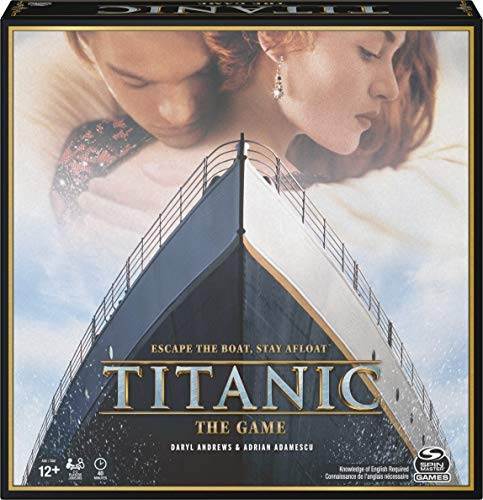