In celebration of WandaVision coming to Disney+ on January 15, we look back at another famous comic book character from the Disney vault, Dick Tracy. Directed by and starring Warren Beatty, this 1990 action-packed comic adventure was ahead of its time. Even though it was a box office success, Dick Tracy could not escape the shadow of Batman and the high level of success the Caped Crusader achieved at the box office the previous year. 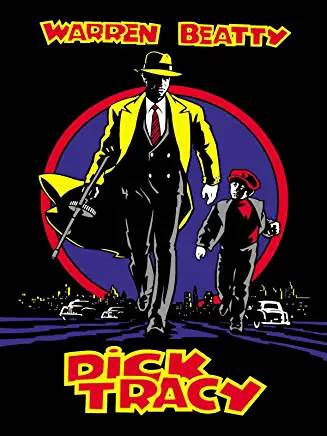 Dick Tracy (Warren Beatty) is the best cop in the city. His pursuit of Big Boy Caprice (Al Pacino) is never ending. Always one step ahead of him, Big Boy consolidates the criminal elements in town by murdering rival gangster Lips Manlis (Paul Sorvino) and his gang.

Faced with a lack of evidence and a District Attorney (Dick Van Dyke) who is unwilling to prosecute Big Boy, Tracy is forced to find concrete evidence that will keep Big Boy in prison. Tracy survives multiple attempts on his life ordered by Big Boy and takes on an orphan child Kid (Charlie Korsmo) as his ward. This growth in Tracy is encouraging to his girlfriend Tess Trueheart (Glenne Headly) who has waited patiently for years for Tracy to settle down and for the two to get married.

On the cusp of busting Big Boy, Tracy is framed for the murder of District Attorney Fletcher. Out of the picture, Big Boy runs rampant on the city, and crime is out of control. Sent to an orphanage, Kid confesses to Chief Brandon (Charles Durning) that he witnessed Big Boy’s top gangster Flattop (William Forsythe) execute a hit on Lip Manlis’ crew.

Fresh with this evidence Tracy is freed and a final showdown takes place at Big Boy’s Club Ritz. The cops move in and the gangsters try to shoot their way out, with no success. Big Boy has been framed for kidnapping Tess by a mysterious gangster known as the Blank. Attempting to flee Tracy and the cops, Big Boy uses Tess as a hostage. A final fight ends with Tracy standing tall, reuniting with Tess and the Kid.

I was a fan of Dick Tracy when I saw it in theatres in 1990, and thirty-one years later I am still a fan. It has all the hallmarks of a comic book film, but it has the talent of quality actors who make Chester Gold’s popular comic characters into live action cinema. The film retains the quality of the comic world relying on matte paintings to set the mood of the city. As the director, Beatty employs the fighting style of what readers of the comic strip might have seen when it was published, which doesn’t take away from the film but cement its connection to the core material.

Warren Beatty was at his pinnacle of success in the early 90’s. At 53, Beatty looks and acts half his age. There are multiple shots where a viewer could tell that it was a stuntman dressed in the Dick Tracy wardrobe, but the shots of Beatty running through the streets show an actor who is at the top of his game. Dick Tracy is the kind of guy who can spend all night chasing the bad guys but struggle over how to tell his girlfriend that he loves her. Warren Beatty is believable on multiple levels as Dick Tracy.

Al Pacino playing Big Boy Caprice is the best casting of all time. Pacino’s hunched back tyrant who misquotes historical figures is a psychopath who is mildly funny. Only Al Pacino could bring his fiery intensity to this role whether he is instructing  the chorus girls on how to perform at the club to using his facial expressions to show his rage at learning that Tracy has bugged his club, Al Pacino is a master. Viewers will see the fury of the gangster and laugh at the mobster as Big Boy laments about the unfortunate circumstances that have led to him kidnapping Tess. To quote Big Boy, which is a perfect way to describe the events of the past few days, “What a way to usher in the new year.”

The supporting cast is just as fantastic as Beatty and Pacino. Glenne Headly is equal parts strong and capable in the role of Tracy’s girlfriend. This role could have been reduced to the damsel in distress trope that has permeated similar films. Watching Beatty and Headly on screen, you feel like they belong together. Her scenes with Charlie Korsmo are just as magical. One would expect that with the ‘adoption’ of Kid, Tess would become all motherly to him. The scene in the diner when she asks him if he wants a broken arm, because he stole money from the table, is not only unexpected but it shows that Tess Trueheart is no pushover.

Rounding out the cast with Charles Durning as the police chief, Dick Van Dyke as the crooked district attorney and bit parts by Paul Sorvino, Mandy Patinkin, and Dustin Hoffman, Dick Tracy is a comic book film with talent to spare.

I don’t like Madonna as Breathless Mahoney. She was a superstar at the time, and Beatty’s girlfriend, but when she is on screen, other than performing at the club, Breathless Mahoney grinds the momentum of the film to a halt. On paper she fits the role of Breathless perfectly. Her performance outside of the Club Ritz leaves a lot to be desired. I didn’t like Madonna in the movie when I first saw the film and my opinion hasn’t changed.

I am a huge fan of this film, and watching the movie again was pure joy. I thought Dick Tracy was one of the best movies of the 1990’s. Warren Beatty is cool as the crime busting cop, and nothing tops the performance of Al Pacino in this movie. He is just so perfect in role of the mobster Big Boy Caprice.

The film was a major hit for Disney, but the planned franchise failed to develop because Dick Tracy was only half as successful as 1989’s Batman.

Despite what critics may have said, I must give Dick Tracy a 4 Golden Popcorn Bucket rating.

Continuing our look at comic book adaptations, next week we look back at Hollywood Pictures and their collaboration with Sylvester Stallone for Judge Dredd.