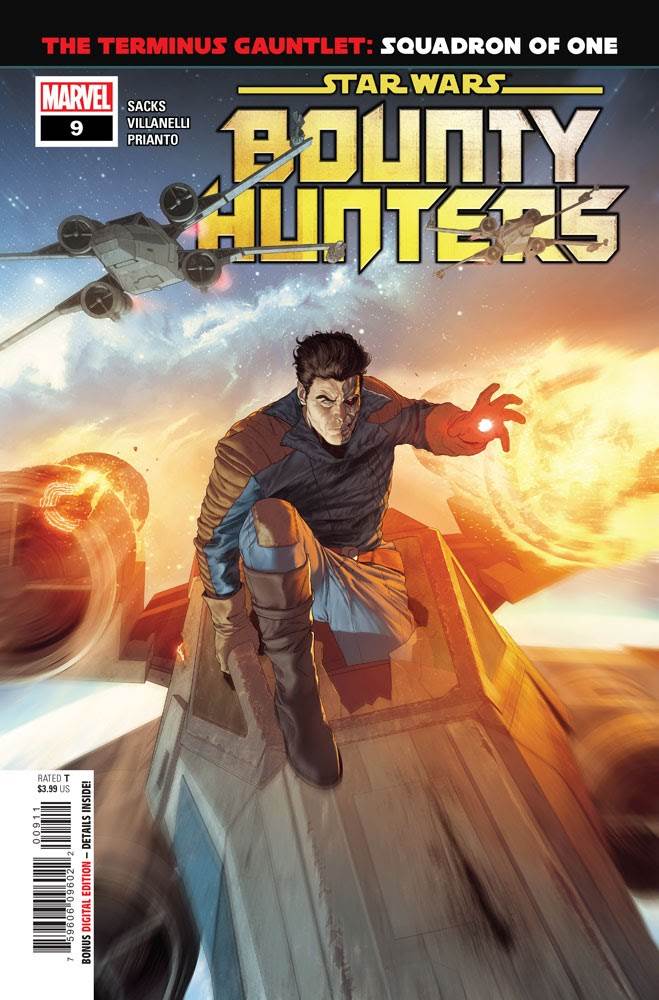 Marvel’s ongoing Star Wars: Bounty Hunters comic book showed some marked improvement in its latest issue, out today, by ensuring that it’s not just another rehash of the same pattern of events we’ve seen over and over in this series since it launched early last year.

Issue #9 of Bounty Hunters— entitled “The Terminus Gauntlet – Part 2: Squadron of One”– starts off with a flashback similar to last issue’s opening, with onetime Imperial academy pilot Beilert Valance stranded on the planet Qhulosk after being abandoned by his squadmates, including a young Han Solo. That story progresses in the same fashion we saw it play out in the Han Solo: Imperial Cadet miniseries, and we return to the “present” timeline (the period between the events of The Empire Strikes Back and Return of the Jedi) to catch up with Valance as he is running a mission for the Rebel Alliance, who had recently helped him out with a significant personal request. 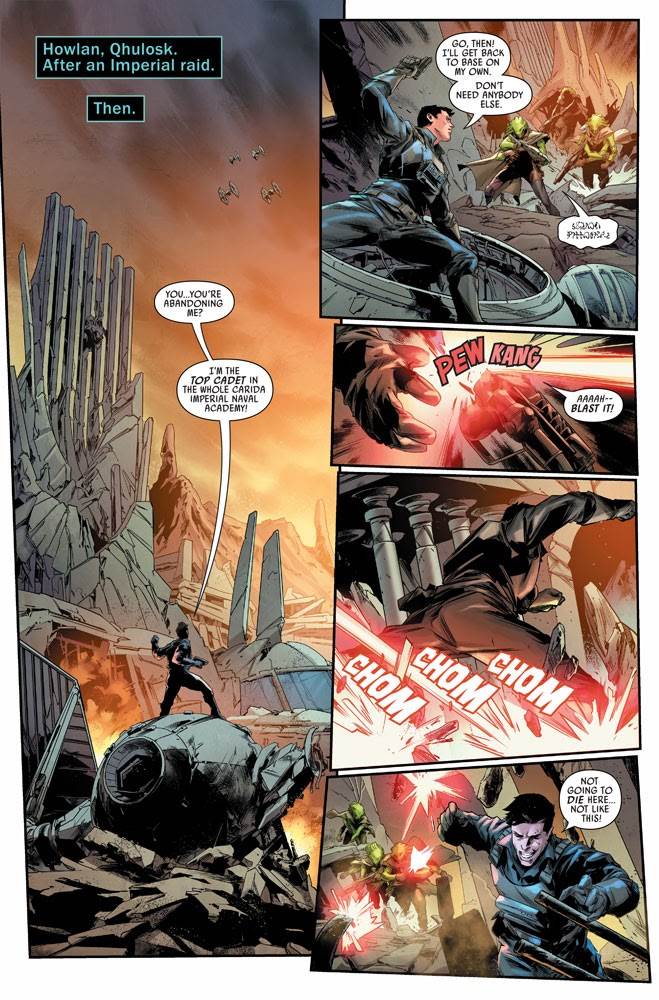 Valance arrives at the disabled husk of a rebel transport stranded in deep space, and must outrun a band of pirates (formerly Hondo Ohnaka’s gang, though Hondo himself is nowhere to be seen and a captain named Skragg rules in his place) to get onboard and rescue the marooned freedom fighters before it’s too late. Skragg is working with Dengar– another famous bounty hunter first seen in Empire— to commandeer the vessel, but Valance makes every effort to help the rebels fight off the pirate scourge, though they don’t quite trust him right away. The bulk of this issue is spent watching Beilert figure out how to combat the threat without the full support of his supposed allies, but we’re also treated to a brief interlude on the planet Ruusan that almost feels like an apology and symbolic course-correction for a plot point earlier in this title’s run that stirred up a decent amount of controversy among online Star Wars fans in 2020. 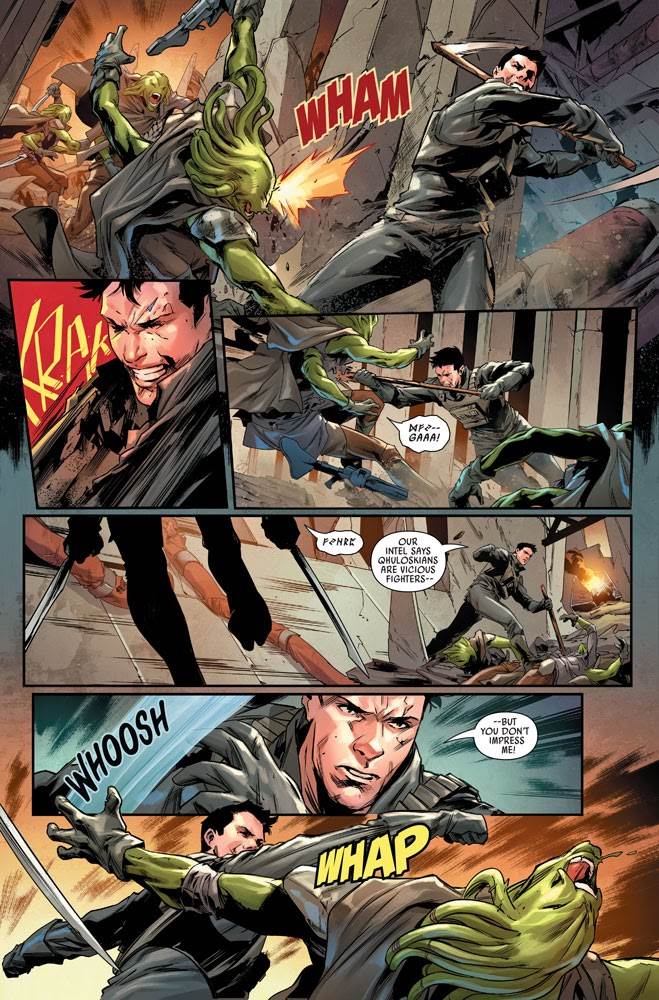 It’s interesting to see writer Ethan Sacks adjusting to vocal criticism of his work, and I think that reveal opens up some intriguing avenues for Star Wars: Bounty Hunters to explore, but I’m admittedly more excited that this issue didn’t just stick to this series’ established (and extremely repetitive) model of having Valance show up somewhere, do battle against another hunter, then flee to his next destination. To be fair, we may very well see that template resurface again next month, as Beilert must face off against Dengar and Skragg, but at least this installment felt like it had a little bit more going on. Paolo Villanelli’s artwork also feels improved in #9, as though the artist perhaps had more time to choreograph the action and block out the story’s pacing. Regardless, it’s nice to feel hopeful about the future of Bounty Hunters again, and last week’s crossover with Star Wars: Doctor Aphra doesn’t hurt either. 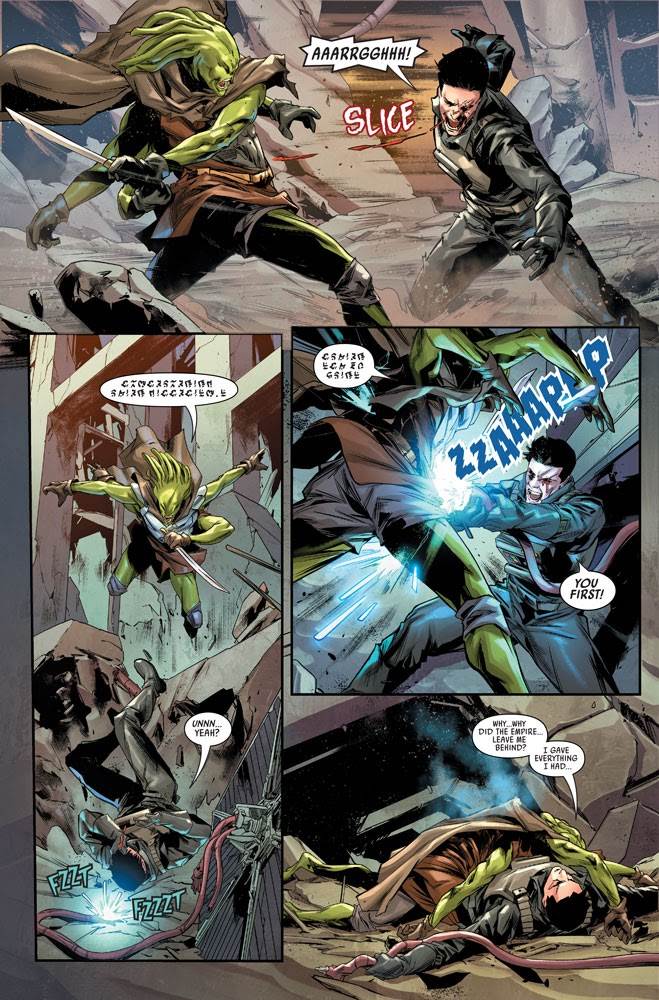