On February 3rd, we had the pleasure of attending another fantastic virtual program from the Walt Disney Family Museum in San Francisco, A conversation with legendary animator James Baxter, as part of their Happily Ever After Hours series. 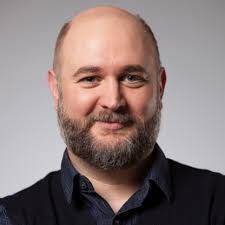 In some circles, James Baxter is a household name, however to most, He is not. However, you know his work. As a young up-and-coming animator, was picked to work with a man who would become his mentor, Richard Williams, on the classic Who Framed Roger Rabbit. He continued with Walt Disney Animation Studios during the renaissance period, working on The Rescuers Down Under, and as a character animator for Ariel on The Little Mermaid. He went on to become the supervising animator of Belle in Beauty and the Beast, where his work in the ballroom dance scene is known the world over. He also gave us the characters of Rafiki in The Lion King, and Quasimodo in The Hunchback of Notre Dame. After that, he left the Disney studio and headed over to up and coming Dreamworks Animation Studios and worked on The Prince of Egypt and The Road to El Dorado. He oversaw the animation of the titular horse in Spirit: Stallion of the Cimarron from the studio before creating his own studio, James Baxter Animation, which contributed to films like Kung Fu Panda. How to Train Your Dragon, Enchanted, and Mary Poppins Returns. Fans of the series Adventure Time might also recognize his work (and voice) as James Baxter the Horse. He is also the force behind Klaus on Netflix and other animated titles that are coming to the streaming service. He was won numerous awards, including an Annie award for his work on Kung Fu Panda, and was presented with the Winsor McCay Lifetime Achievement award at the 2017 Annies. 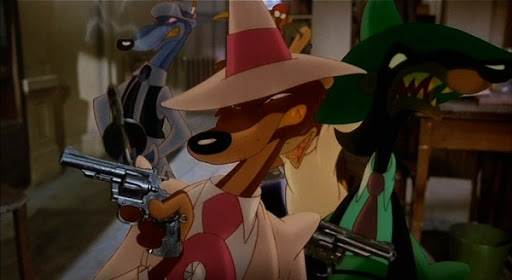 It was Baxter’s work on Who Framed Roger Rabbit (as well as many others that started in the same era) that proved to be very formative. For example, Baxter said had it not been for the experience on Roger, he would have had a far more difficult time animating Belle in the ballroom scene in Beauty and the Beast. Why? For those unfamiliar with the animation process on Who Framed Roger Rabbit, shortly put, those are two movies. One is a live action film full of rigging and puppets and humans interacting with wires and toys that later, an animation production team would go and animate over creating an almost separate animated film. They would literally print out each individual live action frame and draw their animation on top of it. How does that relate to Beauty and the Beast? There’s no live action there, right? True. However, this was the early days of computer animation. Baxter would have printouts of each individual frame of a wire box that represented the ballroom and the sweeping camera motion. According to him, he had a stack of over 500 frames sitting on his desk and he had to animate Belle not only dancing beautifully, but in different sizes as  each different perspective of the camera zoomed in and swept around the ballroom. We think it turned out alright.

Later on in the program, he would elaborate a bit more on his work on Who Framed Roger Rabbit and the process of making that film. He would add that the animators were tasked with hiding all the rigging and puppetry used in the live-action and if you watch closely, especially in some of his scenes that feature the infamous Weasels, the characters’ sizes would fluctuate just a bit here and there to hide something on the set through the animation. In his case, specifically guns on strings and wires that the animated weasels would later be holding.

Many animators of Baxter’s era cite Walt’s legendary “Nine Old Men” as influences on their work. Baxter is no different, immediately mentioning the work of Milt Kahl as an inspiration to his characters, including that of Rafiki in The Lion King, who Baxter jokingly said he “ripped off the elbow tufts” of Kahl’s King Louie from The Jungle Book. He then mentioned that he also took inspiration from Frank Thomas and Ollie Johnston in terms of the acting of a character, saying that they could just get to the heart of a character through the way they made the character perform, but if you were looking for how to make animation “the cartoon-y way” then you’d have to look at the work of Ward Kimball, who took advantage of the medium to do things you couldn’t do any way else. Later on, Baxter would advise a high school student who was asking for good resources about the field and artform to pick up “A good christmas present book,” The Illusion of Life, that was written by Thomas and Johnston. He then added to pick up the book by his mentor, Richard Williams, The Animator’s Survival Kit, because it’s heavily technical and teaches the method. 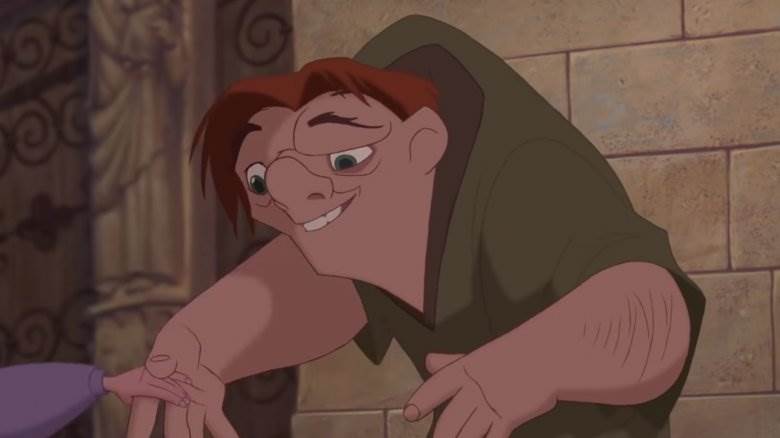 In The Hunchback of Notre Dame, he designed and animated the lead character, Quasimodo, to both be grotesque and appealing, taking some inspiration from Steven Spielberg’s E.T., giving his character large eyes with the nose right in the middle, and designing Quasi asymmetrically, with the drooping eyelid over the eye opposing the shoulder with the hunch. After his work on this film, he left Walt Disney Animation to head over to the studio that was being formed with the help of former Disney executive, Jeffrey Katzenberg, Dreamworks Animation. Baxter worked on the early films from that studio, saying he liked working at Disney because it had the legacy, the archives, and the tradition, but also that Dreamworks was fun because they were just getting started. They didn’t know what kind of movies that they wanted to make, what their styles were, and there were artists there that he wanted to work with. After working on their early films The Prince of Egypt and The Road to El Dorado, Baxter took the assignment of animating the titular horse in Spirit: Stallion of the Cimarron.

Baxter spoke heavily regarding his work on the film saying that he loved to study the horses in real life, though animating the character proved challenging, not just because there were now twice as many legs as a human character, but because they didn’t move as simplistically as he expected them to. Baxter said he would go to the Burbank equestrian center and just watch the horses, studying them, trying to see what would happen when they would run, trot, gallop, and just walk. He said each movement clearly had thought behind it and he would try and get in the horse’s head to see what would make them think about moving that leg in that way.

Oddly, Spirit wouldn’t be the horse that James Baxter is most closely associated with. That would go to James Baxter the Horse in Pendleton Ward’s Adventure Time. During a lecture at CalArts, Baxter was taking suggestions from those in attendance on what he can draw and animate really quickly for everyone. One person suggested “A horse balancing on a ball,” to which Baxter obliged. Later on, Pendleton Ward approached Baxter about animating on his show Adventure Time, revealing that he was the student that asked him to draw that back then at CalArts. Of course, Baxter agreed and not only animated James Baxter the Horse, but provided the voice for the character as well.

Baxter said he feels fortunate enough to not only be recognized in the field, but to know enough people to hear about a project and say “hey, I want to work on that” not for the money, but because he actually enjoys the project. He even uses his animation skills to pay off personal debts. Okay, not really, but he did tell the story of how he reached out to the creator of Steven Universe, Rebecca Sugar, for a present for his daughter who loved the show. She excitedly agreed but when he suggested payment she refused. Baxter suggested that if she ever needed his help for anything, to give him a call. Eventually, that call came, and Baxter contributed to her series. He asked for what she needed and she just said “Do your thing.” The end result, an uncharacteristically smooth piece for the series, harkens back to those camera rotations from back in Beauty and the Beast.

He also reached out to friends at Cartoon Saloon and asked if he could provide anything for their film Wolfwalkers, for which they used his work in two shots, both featuring the lead characters running alongside each other playing.

It’s clear that Baxter’s heart lies in the traditional 2D form of animation, as even as technology advances, he still uses the newer mediums to create animation with a more traditional look and feel. When asked why he just doesn’t switch to CG because “it’s cheaper,” he answered with two shocked words that seemed to mask his frustration: “Is it?!” Elaborating on the point that it’s not cheaper, despite what most people think, saying that where you think the expenses are saved in the form of paper and inks and the labor of the earlier processes, is still present in different ways. In CG now, many time and hours are spent in early development of the characters. In traditional 2D, an animator can get the idea of the character and just start drawing frame by frame. Today, in CG, before an animator can even begin to animate, countless hours (sometimes even years) have been spent designing, modeling, and rigging a character digitally before it is even handed off to a character animator. He said his traditional production, Klaus, for Netflix was actually cheaper to make than Disney’s Zootopia. He also added that CG is not a quicker process than traditional animation, at least if you’re looking for quality. He said that he didn’t feel like he was animating at an equal speed on a computer and producing at the same level of quality until his work on How to Train Your Dragon. Unlike many in Hollywood, Baxter also doesn’t think traditional animation is a dead artform. While giving advice to a student during the Q&A he said that he believes there will always be a demand or want for 2D animation. While most of the work is in television, he notes that the young crop of talent in the 2D field is fantastic and that they all have something that is lacking in a lot of the animation field, and that is passion for the artform. He said that most of them could easily find work in a field of 3D animation, but choose to stay with the 2D because that’s what they love to do, and the passion shines through giving a great quality of work. 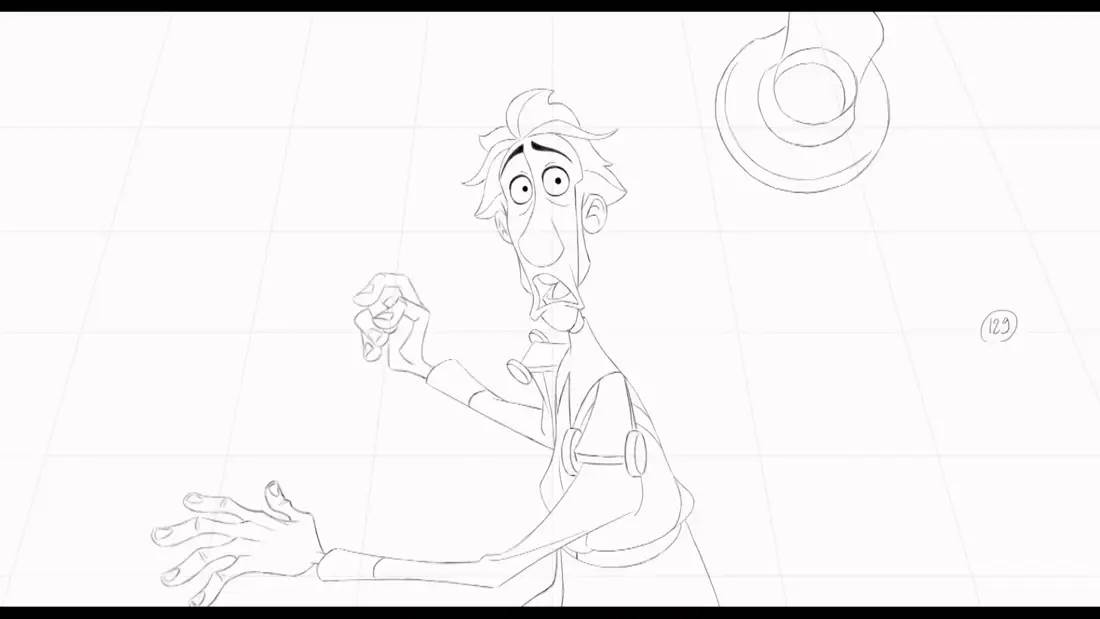 Like most artists, quality is something of great concern for Baxter, saying that while COVID proved that films can be made from animator’s homes, that really, they shouldn’t be. The studio provides an “osmosis” of talent, where the different animators can just walk down a hall and see the work of their colleagues to inspire and influence themselves, something that doesn’t happen at their own desk in a home office. Looking at his list of accomplishments, and his caliber of work, we like that studio idea ourselves, and we can’t wait to see what’s next from James Baxter.