Exclusive Cover Reveal: Disney’s “Tangled” Gets Twisted in “What Once Was Mine”

Twisted Tales, the hit Disney book series premised on the animated classics but with an alternate, “what-if” spin, is poised to twist again.

In fact, the series has achieved New York Times Bestselling Series status and shows no signs of slowing down its success streak or the introduction of new tales anytime soon.

So, what tale is next in line? Tangled. Titled What Once Was Mine and based on Rapunzel’s story, the story description is as follows:

“Desperate to save the life of their queen and her unborn child, the good people of Corona search for the all-healing Sundrop flower to cure her—but mistakenly acquire the shimmering Moondrop flower instead. Nonetheless it heals the queen, and she delivers a healthy baby girl with hair as silver and gray as the moon. With it comes dangerous magical powers: the power to hurt, not heal. For her safety and the safety of the kingdom, Rapunzel is locked in a tower and put under the care of powerful goodwife, Mother Gothel.

For eighteen years Rapunzel stays locked away, knowing she must protect others from her magical hair. But when she leaves the only home she's ever known, wanting only to see the floating lights that appear on her birthday, she gets caught up in an adventure across the kingdom with two thieves—a young woman named Gina, and Flynn Rider, a rogue on the run. Before she can reach her happy ending, Rapunzel learns that there may be more to her story, and her magical tresses, than she ever knew.”

In what sounds like a glorious Tangled meets Frozen magical mashup, fans will be delighted to learn that this book – which will be the twelfth (you read that correctly, twelfth!) book in the series – is authored by none other than the queen of Disney’s Twisted Tales, Liz Braswell.

Liz Braswell has written seven of the series’ books to date alongside equally creative authors Elizabeth Lim (Reflection and So This is Love) and Jen Calonita (Mirror, Mirror; Conceal, Don’t Feel and Go the Distance).

I am still giddy from the relatively recent announcement of book 11, Jen Calonita’s Go the Distance, so this news is keeping my Disney-books adrenaline at an all-time high.

If you are like me and want to kick the fun even further into overdrive, check out this EXCLUSIVE COVER REVEAL of What Once Was Mine! 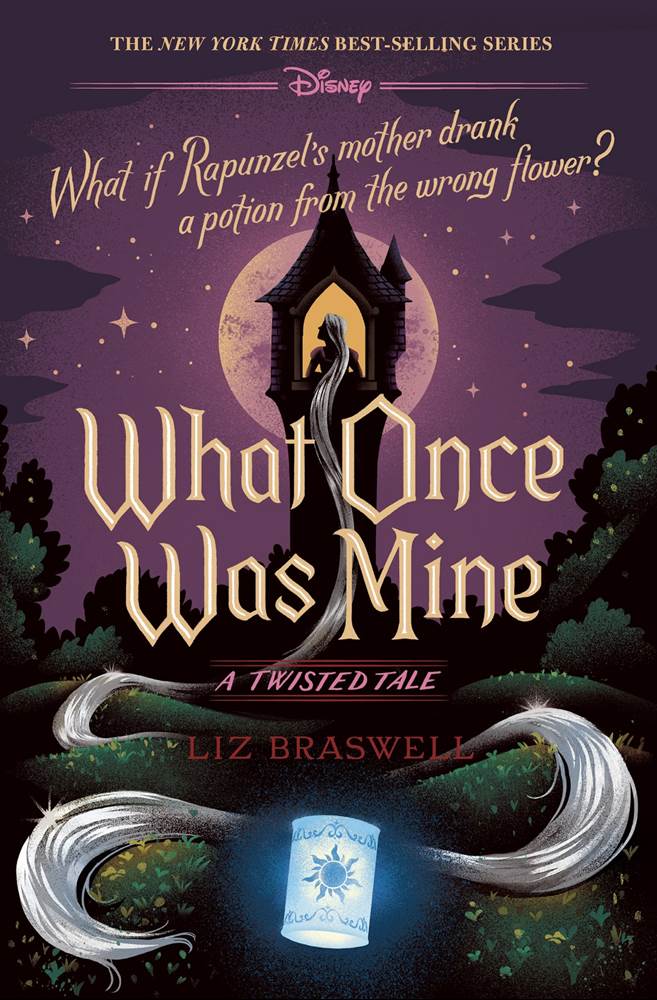 Ta da! There is so much to love about this cover. What struck me first was the 3D effect of the silver/gray hair. It is so beautifully contrasted with the darker, more ominous tones set by the purples, greens and blues. The pièce de résistance is of course the tagline: What if Rapunzel’s mother drank a potion from the wrong flower?

Why, that would change everything!

Which is precisely the point and precisely why this book will be another must-read for all Disney and Twisted Tales fans. Want to get your hands on it as soon as it is released? Go ahead and preorder it HERE.

What Once Was Mine is coming to virtual and physical bookstores near you on September 7, 2021.

Not familiar with Disney’s Twisted Tales? Here is a list of books in the series so far. Can you guess what classic Disney film each book is based on?