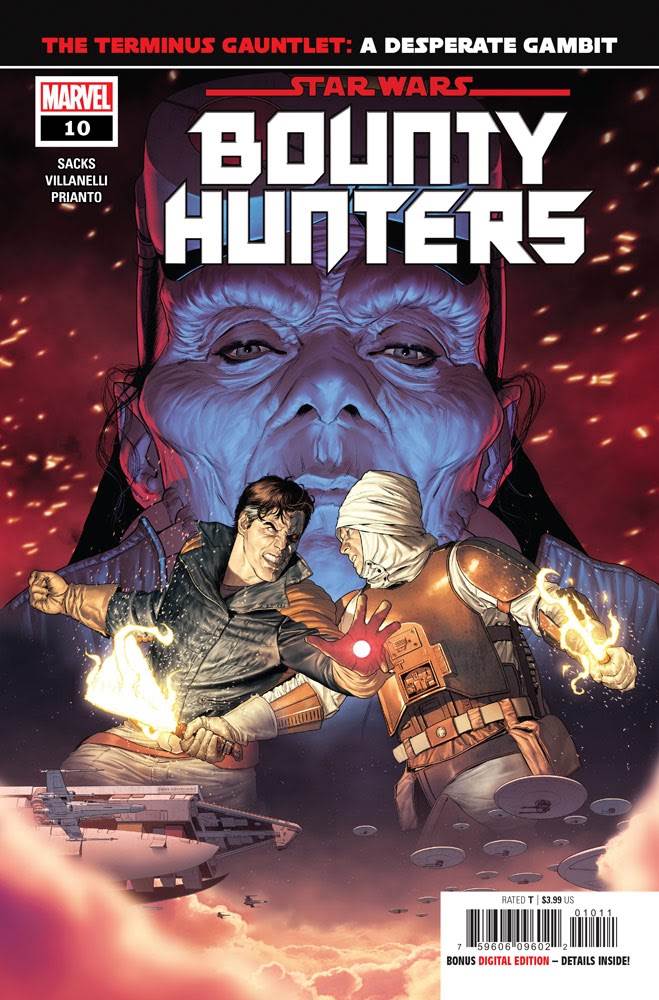 The winner of this spring’s “Most Improved” award for Star Wars comics is pretty much certain to go to Marvel’s Star Wars: Bounty Hunters by writer Ethan Sacks and artist Paolo Villanelli. After seven or eight issues of repetitive planet-hopping and inter-hunter battles last year, in 2021 the series seems to be finding its footing by mixing it up a bit and figuring out how to keep things fresh in each issue.

In Star Wars: Bounty Hunters #10, Sacks pits Beilert Valance against the Ohnaka Gang (minus the absent Hondo) aboard a stranded Rebel Alliance transport vessel, and it’s actually rather exciting stuff, especially once Dengar gets involved. 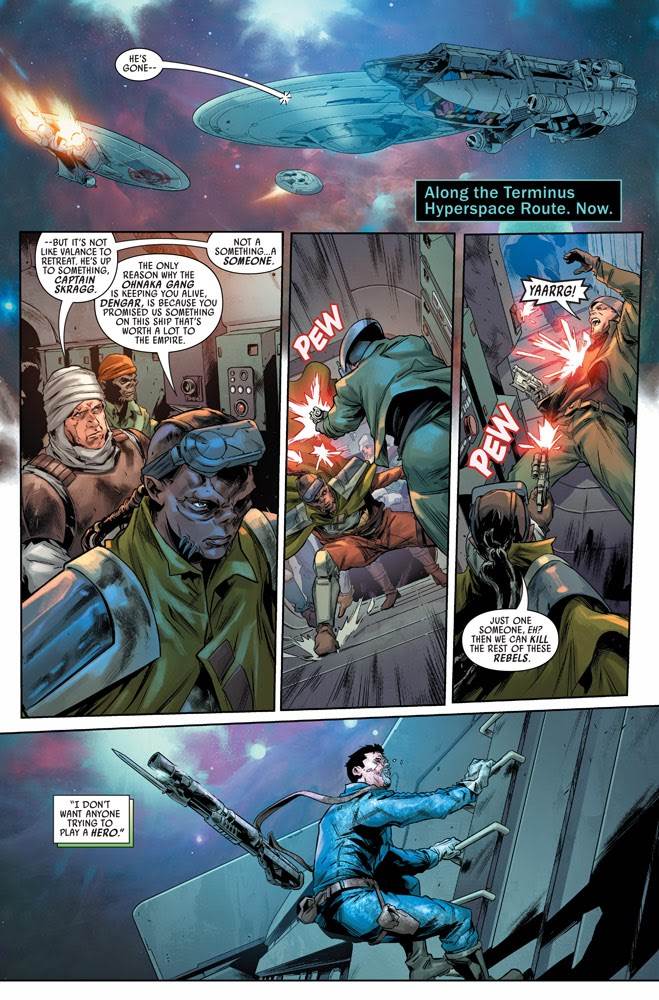 The issue– which represents Part 3 of “The Terminus Gauntlet” arc, subtitled “A Desperate Gambit”– opens with another flashback to Valance’s time as an Imperial cadet, or more accurately the end of that period in his life. We learn that the now-cyborg future bounty hunter was actually fairly appreciative of young Han Solo’s attempt to save his life, though Solo doesn’t stick around long enough to hear him give thanks. Cutting back to the “present” (set between the events of The Empire Strikes Back and Return of the Jedi), we see Beilert clinging to the exterior of the rebel ship, before breaking inside and taking out the space pirates one by one, John McClane-style. Meanwhile, we get an update on the status of the recovering T’onga and her girlfriend Losha, who vow to avenge the death of their friend Nakano Lash, who died in a spaceship explosion after a confrontation with Boba Fett five issues back. Plus, we get to know some of the rebel soldiers helping Valance clear out the gang, find out why Dengar is being held captive, and see Beilert’s reaction when he finds out what happened to Han Solo at the end of Empire. Seems like everyone is about to enter into pursuit of a certain Mandalorian-armored bounty hunter in upcoming issues. 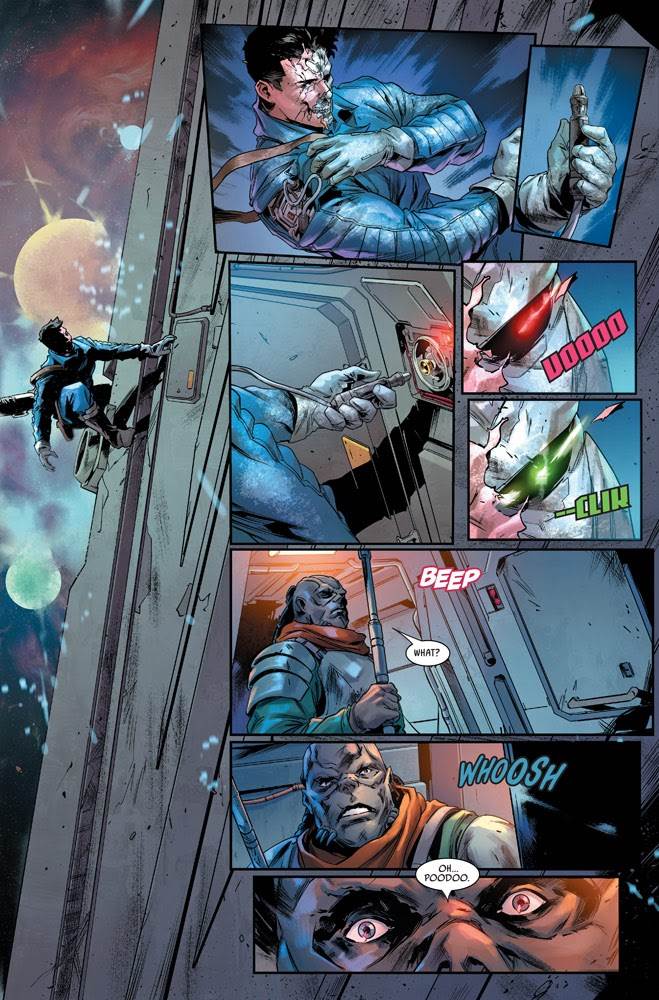 I found issue #10 of Star Wars: Bounty Hunters to be a reasonably entertaining installment in the ongoing title. The action is engaging and the interplay between all the various characters is fun, with the highlight being the climactic (and hilariously brief) face-off between Valance and Dengar. Obviously this is all building toward the highly anticipated upcoming War of the Bounty Hunters crossover, and I can see how Sacks is planting the seeds here for what his protagonist’s part will be during that event. It was also cool to see Zuckuss and 4-LOM again, and I’m guessing they will play a role in that titular “war” as well. I’m still not 100% sold on Villanelli’s art, but I think one can say that it does fit the tone of what’s happening in the story, at the very least. As a side note, it looks like next month’s issue features Bossk on the cover, and if you know anything about me as a Star Wars fan, you know how intrigued I am by the Trandoshan’s return to these pages. With that in mind, I’ll look forward to reading more in coming chapters of Star Wars: Bounty Hunters. 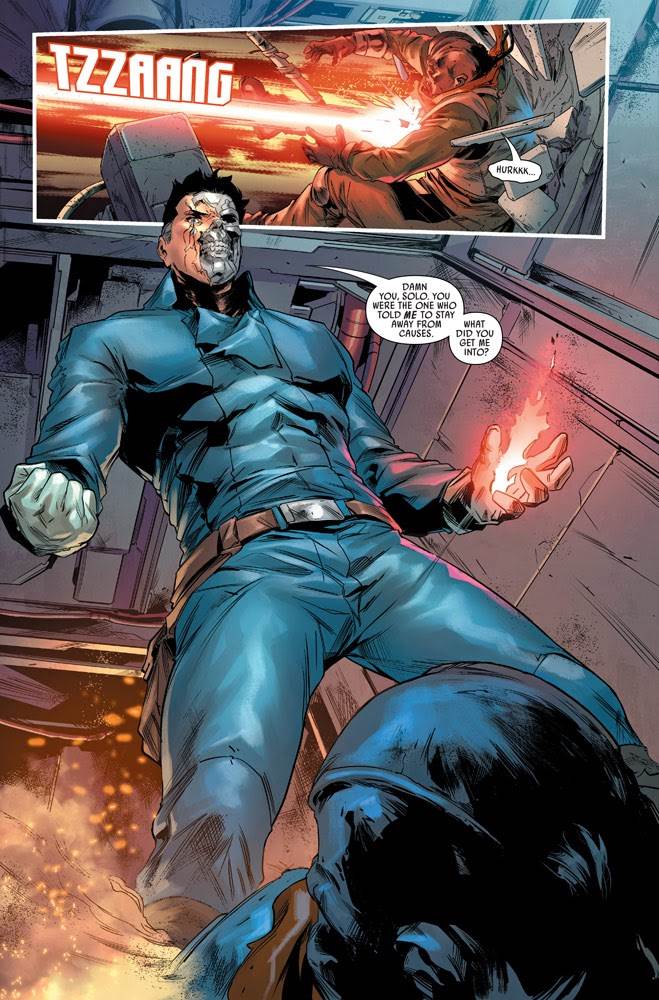