SXSW Event Recap: Behind FX’s “Fargo” Through “A Conversation with Noah Hawley and Andrew Bird”

The fourth season of FX’s critically acclaimed series Fargo was set in 1950 and marked the acting debut of singer songwriter Andrew Bird. At the online South by Southwest (SXSW) festival, writer Noah Hawley joined Andrew Bird for a conversation about breaking into acting on a show like Fargo and also what’s in Noah Hawley’s mind as he prepares the show’s fifth season. 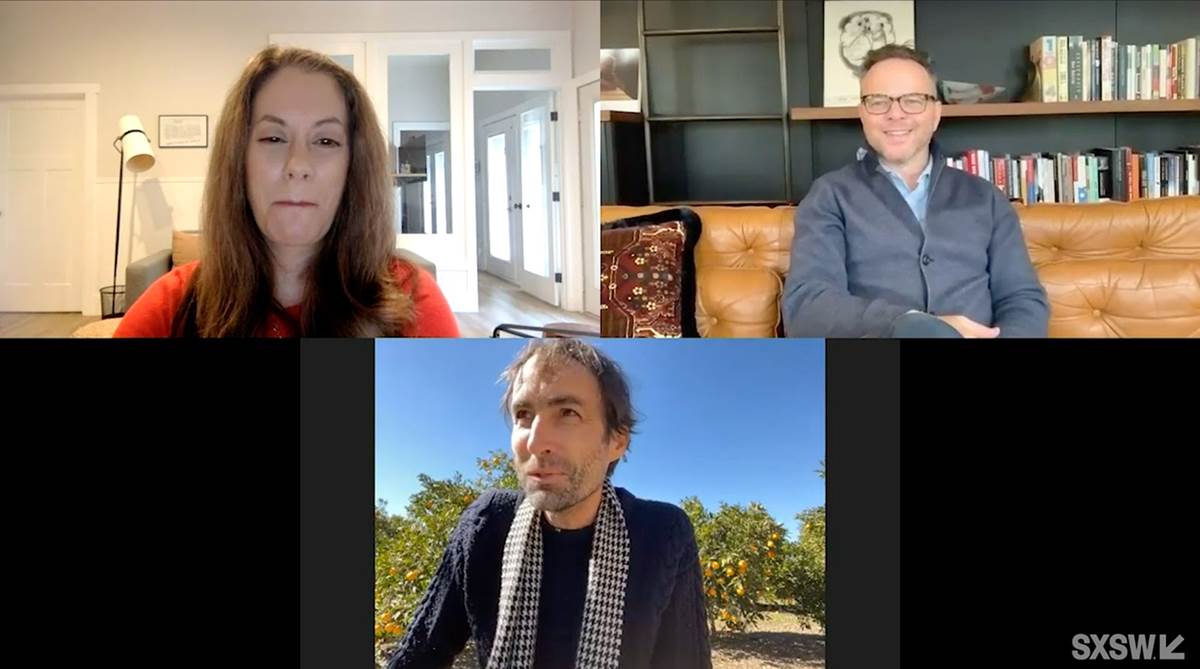 It’s fitting that “A Conversation with Noah Hawley and Andrew Bird” was conducted at SXSW because it’s actually how the two met to begin with. Andrew Bird was at the festival participating in a radio benefit when he was asked to meet with Noah Hawley. Sharing his casting process, Noah explained that he writes the characters without having an actor in mind, but then thinks of who could best fill the role. “I told Andrew it feels like his music is nostalgic for music that never existed,” the show’s creator, producer, writer and director shared. “It felt period to me without being period specific.”

“He told me it was based on my stage persona,” Andrew revealed about his first meeting with Noah, where he needed some convincing that he was right for the part. “I said ‘What makes you think I can do this? I’ve never acted before.’” Realizing that the singer had an onstage presence that was an altered version of his normal personality, he had faith that he could portray Thurman Smutny. “I’m always up for something I could learn something from, but I really hadn’t given acting a thought before this came up.”

Andrew spent three months reviewing the scripts and memorizing his lines before shooting began, but he was thrown for a loop on his first day of filming. Set in the winter, continuity can be a challenge regarding the presence of snow in outdoor shots. “We were supposed to do this outdoor scene but we couldn’t clear enough snow, so we had to move the shot indoors,” Noah shared, revealing that he had to write a new transitional scene to segue an outdoor scene back indoors. The green actor was surprised to discover that dialogue and scenes could change that rapidly, the cast not given much time to commit the new lines to memory before the cameras rolled.

In the end, the experiment ended up opening a new door for Andrew Bird’s career. “I’m really curious what I’m capable of,” he shared when asked if he was interested in acting again someday. Unable to see his footage played back while on set, he spent the entire shoot unsure if he was doing a good job, but was ultimately happy with his performance when the episodes aired.

There haven’t been any official announcements yet about a fifth season, which isn’t that unusual for Fargo where new seasons often have at least a two-year gap, set in a different time period and with a completely different cast. “I think that it will happen,” Noah Hawley answered when asked what fans can expect. “I’m not in a place where I’m writing on that yet, there’s a couple of other things I’m working on first, but I’m excited to do one. On some level, I have to store up 10 hours of what there is to say, so I have my notepad and I keep writing things down and I will get to it in the next year or so, I’m sure.”

All four seasons of Fargo are currently streaming on Hulu.