On April 20th, Freeform invites viewers back to the 1990’s in Cruel Summer, a psychological thriller that gives the perspectives of two girls in the same town over the course of three subsequent summers. South by Southwest (SXSW) attendees were treated to the pilot episode, followed by a Q&A with the creative team and cast. Participants included producers Jessica Biel and Michelle Purple, showrunner Tia Napolitano, and actresses Olivia Holt and Chiara Aurelia. 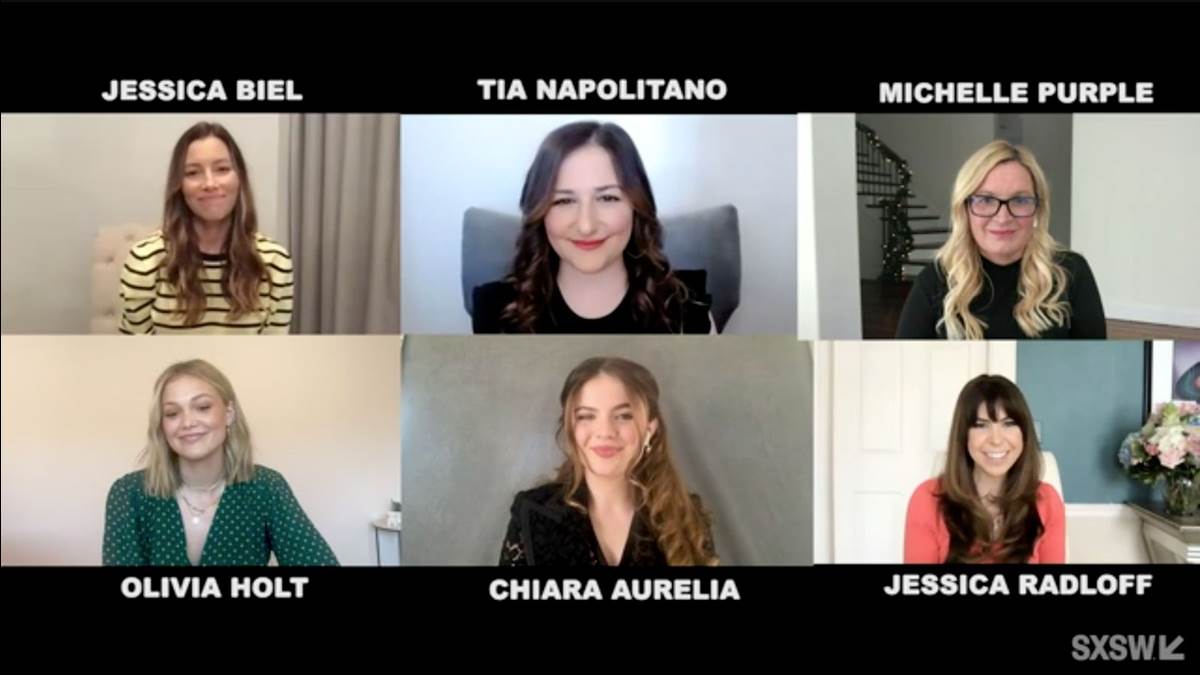 “We read the first episode and we couldn’t stop thinking about the nonlinear storytelling and the incredible young female characters,” Jessica Biel shared when asked about what attracted her to the series. “Initially you think this could be a girl vs. girl story, but it really is completely about a difference of perspective, your truth vs someone elses truth.” She also added that the 1990’s esthetic was nostalgic for her and most of the creative team, who grew up in that era just like the characters in the series. She and Michelle Purple were also eager to find a project that appealed to their sensibilities that would also be aimed at a teenage audience.

“I came on board shortly after the pilot was shot,” showrunner Tia Napolitano explained. “When I read the script, when I saw the pilot, it just blew me away. It was so ambitious and intriguing and I think the opportunity to tell stories with this ensemble centered around these two young women was unbelievable.”

Disney Channel alumni Olivia Holt shared how she got involved with the project. “I read the first 2 episodes and I really fell in love with the characters… To be able to really be a part of something that’s very female driven is really important to me… These 2 girls are so different and so important and even though this story is told in an era of the 90’s, I feel it’s so relevant to today. I instantly fell in love with all the characters and I’m so thrilled to be a part of this show.”

Chiara Aurelia had a lengthy audition process, but knew from the beginning that Cruel Summer presented a unique opportunity as an actress. “I think that it’s really rare to have an opportunity to show all of the flavors and all of the layers and all of the colors of not just a character, but a human.” Knowing that the odds were against her landing the part, she revealed that she kept telling herself that she wouldn’t get the role, even as she entered the callback stage of the audition process.

With a timeline that bounces back and forth between 1993 and 1995, the actresses shared that one of the trickiest parts of the process is keeping up with where they are in the story with each scene. “We have a great team of people to help us stay on track, which is helpful,” Olivia explained. The characters' looks also change based on the year, which adds other layers of complexity for the wardrobe, hair and makeup departments. “I love the different years, it makes it so much fun,” Chiara added.

Having filmed 9 out of 10 episodes when they took a break for South by Southwest, Olivia and Chiara revealed that they still don’t know how the story ends, a closely guarded secret that none of the procedures or writers will share. “What we’re asking these girls to do is so hard,” Jessica Biel shared. “This is the hardest thing as an actor. Usually you know where you’re going so as an actor you can step back… They’re working off this question mark, this blank space. Giving the kind of performance they’re giving without this knowledge is incredible.”

Freeform’s Cruel Summer promises to be a crazy journey for viewers full of 1990’s nostalgia mixed with contemporary storytelling devices. You won’t want to miss a single moment and the fun begins Tuesday, April 20th.