The Baxter’s and Grayson’s are back with another new episode of Raven’s Home, now streaming on DisneyNow. Titled “Diff’rent Strikes,” this episode finds the kids stuck at home while their teachers go on strike. Here’s a full recap of all the fun that ensued. 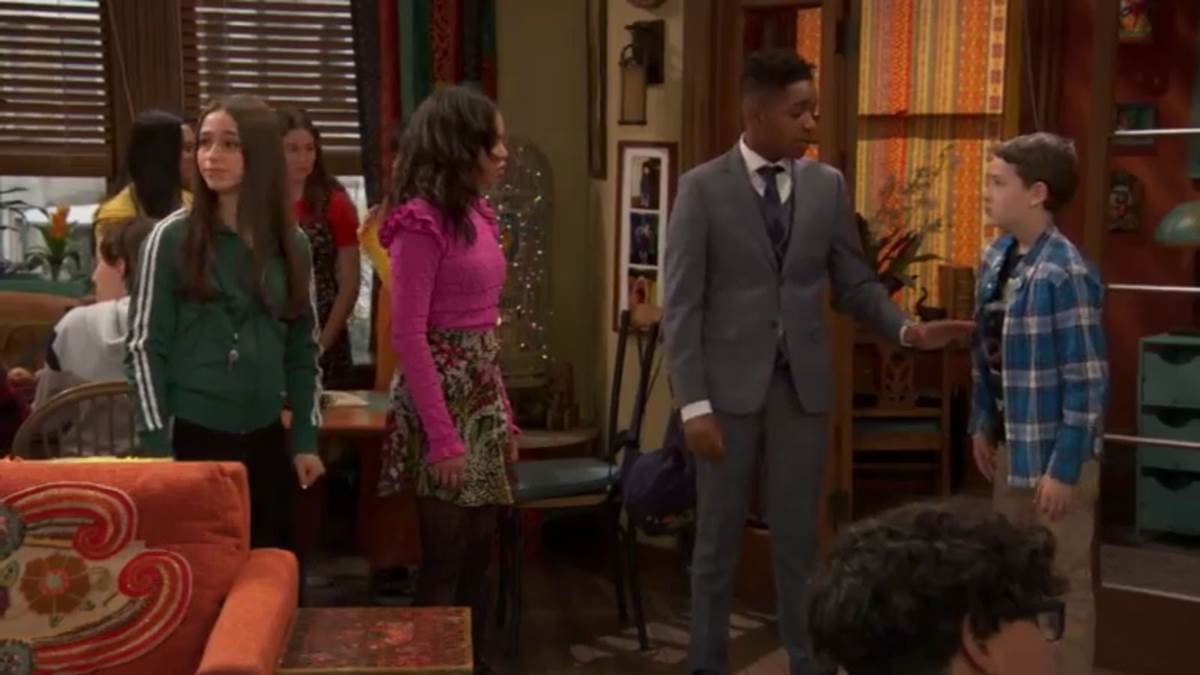 Raven and Chelsea are driving Booker, Nia and Levi to school, hoping they won’t be late again. Nia and Levi were both running late but Booker was ready early, which is suspicious to Raven. He tells her he wanted to impress Principal Jones, who is his new role model. Just as he mentions him. They pull up and Principal Jones approaches the car with his megaphone, announcing that the teachers are on strike and that “Parent participation is mandatory,” echoing his speech about joining school clubs from the previous episode.

Nia looks on her phone and sees that all the teachers walked out over a need for smaller class sizes and updated facilities. Levi shares that at his school, the nurse is also the art teacher and he’s tired of making crafts out of gauze. Raven notices an email she didn’t read about the strike as Chelsea jumps out of the car to join in the protest, revealing that she doesn’t want another picture frame made of gauze for Christmas.

Back at the apartment, Raven and the kids find Tess on the couch, who stayed home because she heard about the strike. Levi is upset about missing school, saying “My brain’s like a car. If you leave it in the garage it might not start up again.” Sienna is leading a study session upstairs and Raven has arranged for the kids to join her when Chelsea calls, asking her to bring donuts and coffee for the protesters. Raven leaves, assuming the kids will be going upstairs to study.

Just then, Booker has a vision of Principal Jones thanking him for starting a study group and telling him that Booker reminds him of himself. He tells Nia, Tess and Levi what he saw and convinces them to hold their own study group, winning Nia over by promising that she can teach about the environment.

Raven arrives outside of the school with a box of donuts and coffee for the teachers, meeting Mary, an English teacher who is also a parent. Her sign is lackluster and Chelsea helps her rewrite it when Raven has the idea to make fancier signs to get more attention. Setting up shop, they pass out their new bedazzled signs and Chelsea leads the group in a more lively chant.

The study group is going well back at the apartment, with Levi teaching science and Nia teaching environmentality while Tess spreads the word about their group. “As educators, we need to be the change we want to see in the world,” Booker tells them, quoting a magnet from the fridge. Tess comes back in and says she put the word out about their study group, which is called “No school, no problem.” She opens the door to reveal a line that goes down the stairs.

Booker tells them he has a plan, returning in a suit just like Principal Jones’. Levi tells him it’s too crowded in the apartment and Booker tells him he’s going to handle it, but all he does is get their peers to chant his name. Tess tries to hold a gym class on the roof, but it’s too windy and she comes back down almost right away. Levi used the bedroom he shares with Booker to make an active volcano for his science class, which is now another problem.

Back at the school, Chelsea is still leading the teacher’s protest when Mary informs Raven that her son is at her apartment along with most of the school. She’s shocked, grabbing Chelsea and making a plan to go home. Just then, a news crew arrives and they get stopped for an interview.

While Booker prepare a lunch of olives, kale, pasta and mustard, Nia, Tess and Levi have things thrown at them by the students who are chanting that they’re hungry. Tess tells Booker her mom keeps orange slices in the apartment and goes to get them. Booker makes an announcement that fruit snacks are on the way and takes all the credit when she brings them back. Having enough, Nia, Tess and Levi go on strike. As they walk out, Levi reveals that the bathroom is broken, too. “I hope you’re a better plumber than you are a principal, man.”

Raven and Chelsea finally break free so they can head home when Principal Jones asks if he can join, wanting to see the study group the kids put together. Entering the apartment, they find chao, with Booker crying and rambling about all the things that happened. Raven announces that all of the kids need to call a guardian to come pick them up. When someone asks who she is and why they should listen to her, she replies, “I am Principal Booker’s Mama.”

In the hallway, Principal Jones thanks Booker for starting the study group and tells him he reminds him of himself (fulfilling Booker’s vision), but asks what happened. Booker tells him that he made a mistake. “If you aren’t making mistakes, you aren’t learning,” Principal Jones tells him. “That’s part of the job.”

Once everyone leaves, Booker apologizes to Nia, Tess and Levi. He also apologizes to Raven, who hands him a plunger. The next day, the whole family joins the teachers in protest and Chelsea is excited to teach a new chant with choreography when Principal Jones announces that the strike is over. Chelsea is sad, so Raven asks her to teach it to her anyway.

Raven’s Home will be back on April 2nd with a new episode called “Fresh Off the Note.” Here’s the official description from Disney Channel:

When Booker suspects that Nia’s friend Olivia has a crush on him, he decides to put a “let’s be friends” note in her locker but accidentally puts it in Tess’ locker!