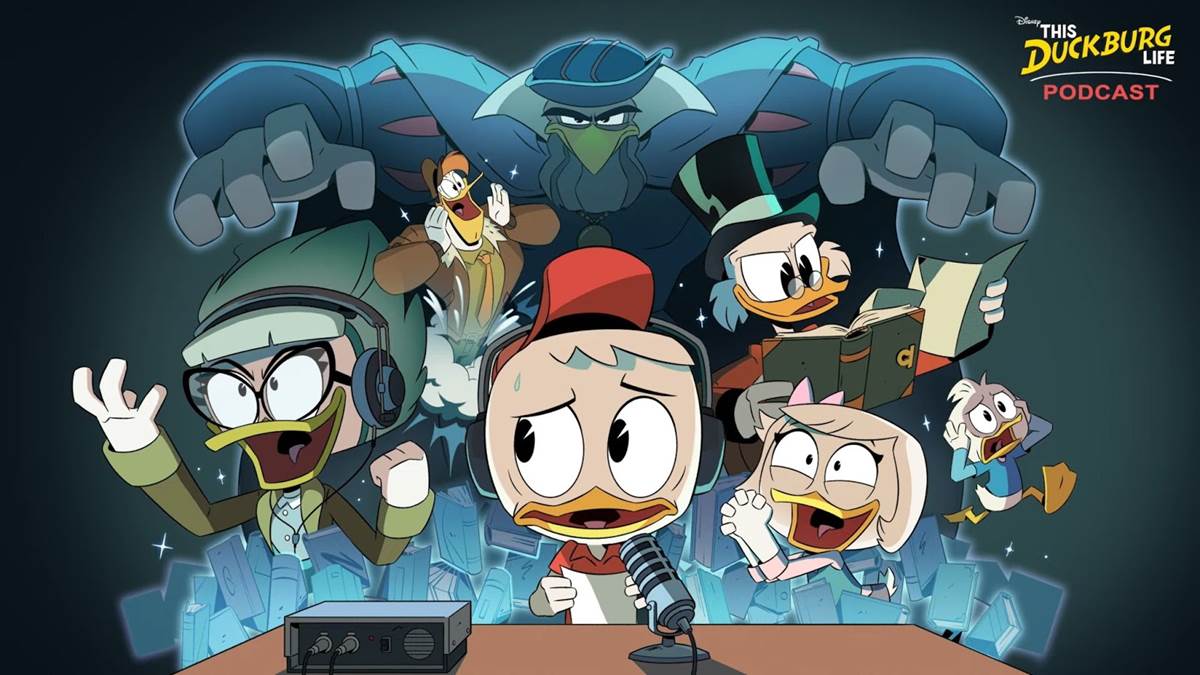 Hello and welcome to part four of Laughing Place’s seven-part recap of Disney XD’s new podcast This Duckburg Life, which expands on the fictional world and characters established in the recently completed DuckTales reboot series.

Episode 4 of This Duckburg Life, entitled “Ghost Library,” begins with Uncle Scrooge McDuck (voiced by David Tennant) leading members of his family on a “once-in-a-lifetime adventure,” though Dewey (Ben Schwartz) complains they are just in a boring field. Scrooge explains that they are moments away from something amazing, when an eerily atmospheric noise seeps in. “Welcome to the Ghost Library,” says Scrooge. He explains it’s the spiritual remains of a City Hall Library which burned to the ground 500 years earlier. Huey (Danny Pudi) interrupts the story to introduce the podcast, and then we hear Scrooge tell his companions that they are seeking a map to “the greatest treasure in the world,” though they must follow a set of rules.

The gang has exactly 12 minutes for their mission (based on the library showing up for only 13 minutes every 100 years, minus the time it takes for Scrooge’s explanation), if they speak louder than a whisper they will be banished out of the library– of course Launchpad McQuack (Beck Bennett) breaks this rule immediately, and the library contains the spirits of books that were never written. Scrooge has taken advantage of that last rule by dreaming up the aforementioned map, and he intends to find it. Inventor Gyro Gearloose (Jim Rash) breaks in with an advertisement for his new business Shrink Mattress: “the only bed that comes with my patented shrink ray” to help with moving. “What could go wrong?” 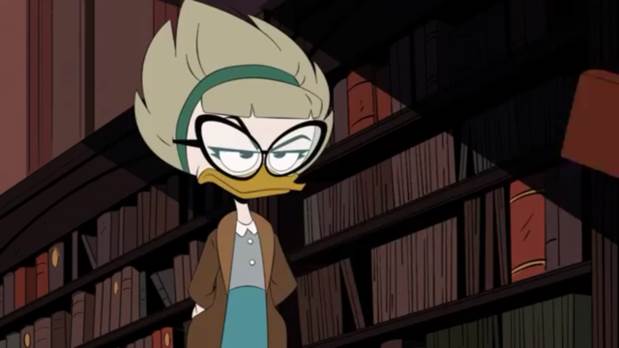 In Act 2 of “Ghost Library,” Huey is joined by a library expert– the McDuck Enterprises archivist Ms. Quackfaster (Susanne Blakeslee), who warns of the dangers of libraries that will “trick you, trap you, and steal your soul”– not just the Ghost Library, but “all libraries!” She lists some of the authors with animal pun names whose unwritten books can be found in the Ghost Library like Jane Austhen, Edgar Allan Pug, and Phillip K. Duck. She also tells Huey that the greatest explorer of all was a victim of the library: Birdinand Magellan, who now works at the ghostly location. “If you see Birdinand Magellan, you’re just as doomed as he was. He’s there to stop anyone who got in from getting out.” A second commercial break with Gyro Gearloose, following up on his shrink-ray mattress idea. He suspects all of his customers have accidentally shrunk themselves thanks to the backwards shrink ray he mistakenly included in all shipments of his mattresses, so he’s now offering “Teeny Person Finder Robot” to help track down any missing friends or family members. “Let’s just hope it gets better.”

Act 3 starts with Scrooge, Webby (Kate Micucci), and Dewey making their way through the Ghost Library. They encounter unsettling whispers that trick Dewey into yelling and being banished from the library, and Scrooge warns Webby that if they’re still in the library when it vanishes they’ll be trapped inside for another hundred years. The two remaining ducks are attacked by flying magazines and paperbacks until Uncle Scrooge screams in pain, causing him to vanish and leaving Webby alone in the haunted building. The whispers start again, preventing Webby from concentrating, so she tells them to speak up and gets the whispers themselves banished from the library. She comes up with an idea to imagine a guidebook to the location: Your Complete Guide to the Ghost Library by Webbigail Vanderquack, and uses it to find Scrooge’s treasure map book. With 30 seconds remaining to leave the library, Webby runs into the ghost of Birdinand Magellan, who attempts to trap her there for all eternity. We cut to Huey asking “Did she make it out?” with Webby replying “Of course I did!” revealing that she is now in the studio being interviewed about the adventure. They play the recording of Webby escaping Birdinand Magellan, in which she just yells to “poof” herself out of the Ghost Library. Then Uncle Scrooge shows up in the studio to answer the big question: “You’ve got the treasure map. What next?” Scrooge says his plan is to lock the map in his Money Bin where no one can ever find it, explaining that the “greatest treasure in the world” is already his, and the map leads to his own Money Bin. “I had to get it in order to keep anyone else from getting their hands on it.” “The biggest prize Uncle Scrooge could imagine was the one he already has,” concludes Huey. The episode ends with a third commercial from Gyro Gearloose, and of course the Teeny Person Finder Robots have turned evil– a recurring theme– and enlarged themselves using the reverse setting on the shrink ray. So now he’s selling Anti-Teeny Person Finder Robot Mecha Suits to “fight back against the robot apocalypse.” Donald Duck (Tony Anselmo) reads the credits once again.