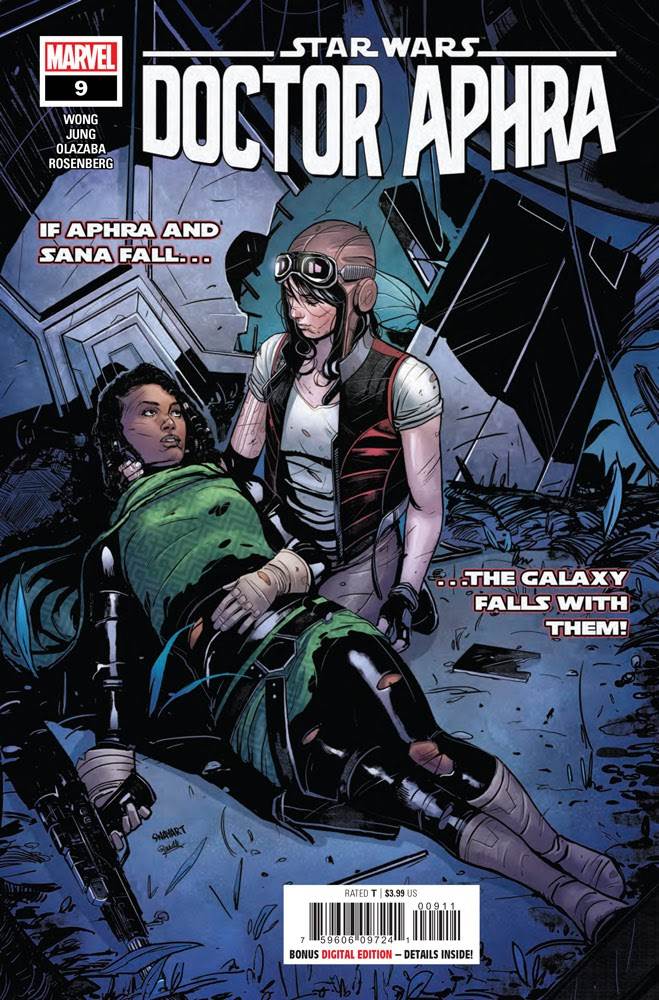 Lately I’ve been talking a lot about how Marvel Comics’ Star Wars: Bounty Hunters title has begun to grow on me after getting off to a rocky start. Unfortunately I’m starting to feel the opposite about Star Wars: Doctor Aphra, which was previously one of my favorite ongoing series from the fruitful collaboration between Marvel and Lucasfilm Publishing.

Issue #9 of Star Wars: Doctor Aphra volume 2, entitled “The Engine Job – Part 4: Impossibilities,” picks up where the previous installment left off, with the titular rogue archaeologist Chelli Lona Aphra and her ex-girlfriend Sana Starros stranded on the planet Dol’har Hyde thanks to an ambush by the Unbroken Clan’s General Vukorah. Aphra and Starros are searching for ancient hyperdrive technology left over from the High Republic era, but unfortunately just about everybody else in the galaxy seems to be after it as well. 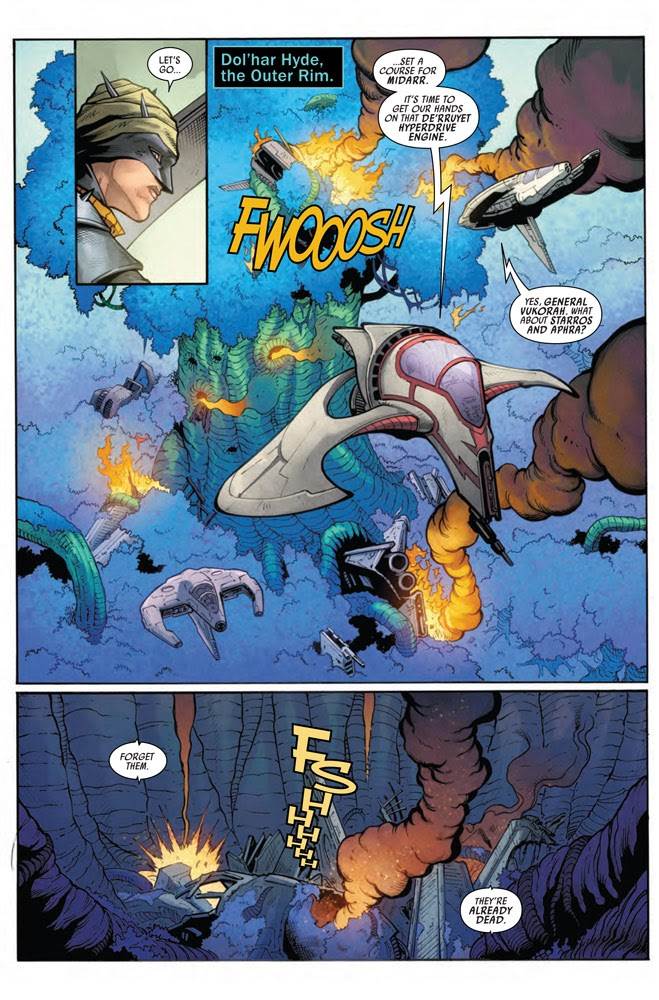 Doctor Aphra #9 starts off well enough, with Chelli and Sana escaping their predicament, discovering Vukorah’s wrathful massacre at the local cantina, and making their way to someplace called Midarr, where De’Rruyet Industries is set to show off its own repurposing of the Nihil Path Engine tech. To break into the facility, the two ex-lovers knock out a pair of interns fetching coffee (called “caf” in A Galaxy Far, Far Away) for the company’s temperamental founder Beol De’Rruyet and take their clothes. Of course they’re not recognized as imposters by any of the guards or De’Rruyet himself upon entering the laboratory, which I found to be a tad bit on the implausible side of things. I would think Aphra (and otherwise talented writer Alyssa Wong) would be able to come up with a cleverer plan, or at least one that doesn’t feel quite as hackneyed. 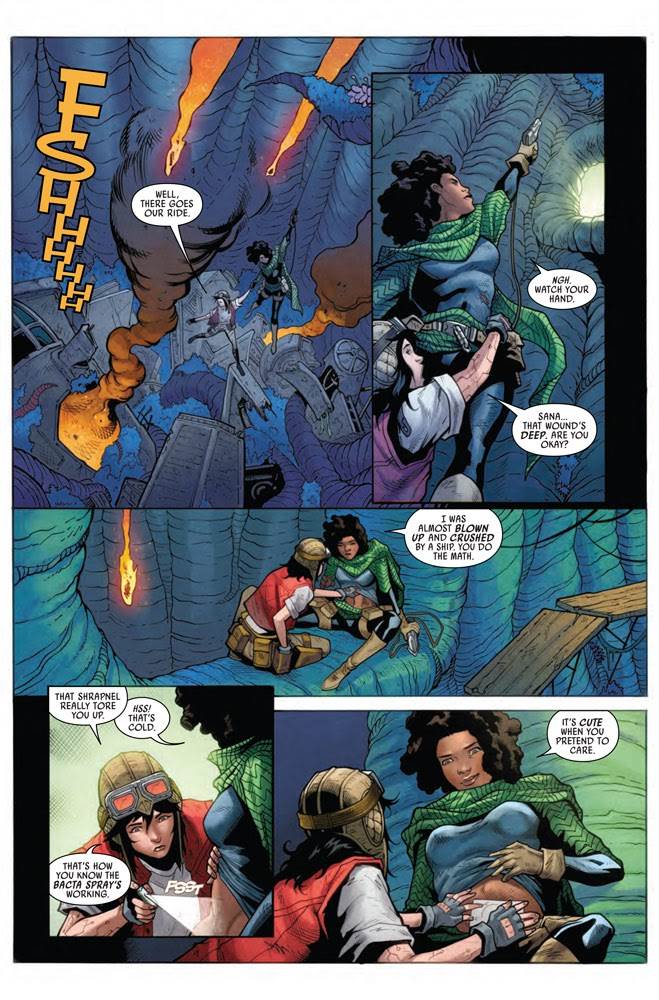 The remainder of the issue feels similarly silly, with Aphra and Starros swiping De’Rruyet’s access card, pretending to be Imperial investigators, and generally snooping around without much interference until Vukurah shows up again, blasts a hole in the side of the building, and demands the Path Engine for herself and the Unbroken Clan. We also get a fairly disposable interlude featuring the assassin Just Lucky and his Sixth Kin colleague Ariole Yu, who are collecting debts for their boss Wen Delphis in Canto Bight. All told, this feels like a placeholder issue used to get all the players where they need to be for the launch of the Star Wars: War of the Bounty Hunters crossover event which starts next month. The art on display here by illustrator Minkyu Jung is fine, but I believe Wong has proven herself capable of much more interesting things in issues past. Let’s hope once War of the Bounty Hunters is over and done with she can get back to telling solid Doctor Aphra adventures that aren’t hindered by having to tie in with the larger machinations of the Star Wars comic book chronology. 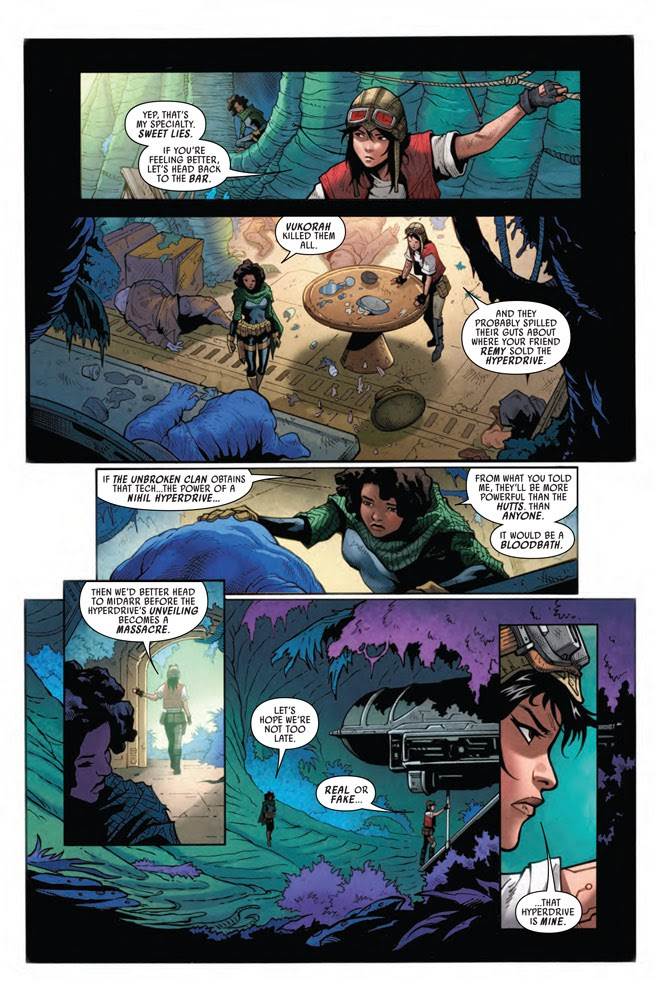