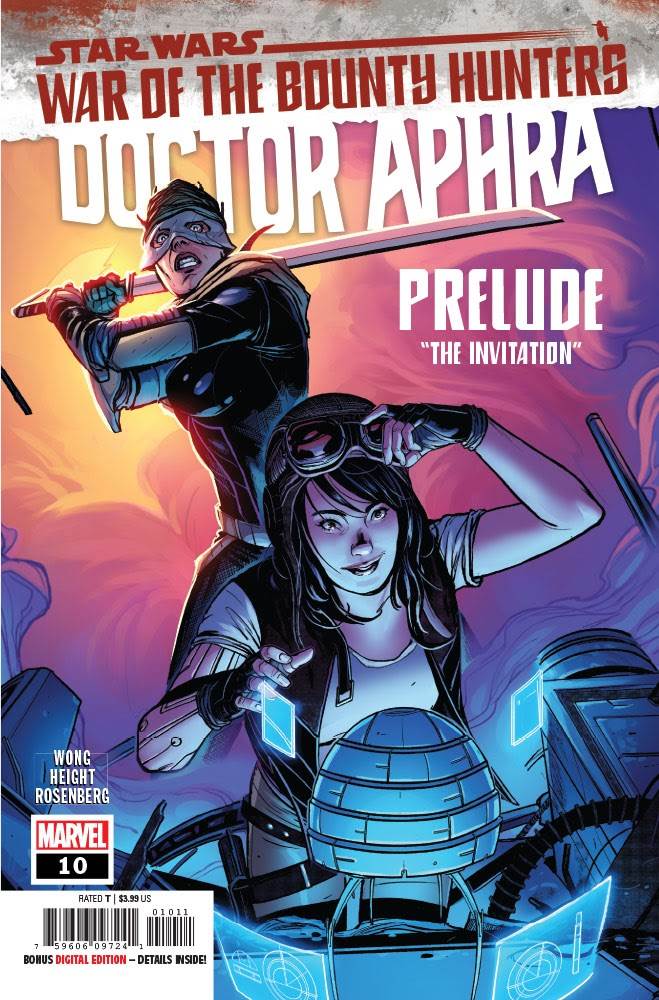 With over 30 issues of Marvel Star Wars comic book titles set to tie in with this summer’s big War of the Bounty Hunters crossover event, not all of them are going to feel as integral to the larger plot as the others. Case in point: Star Wars: Doctor Aphra #10 by Alyssa Wong, who uses the issue (entitled “The Invitation”) to wrap up the previous arc’s story rather than have these characters really lean into the chase for Boba Fett just yet.

In fact, except for the last panel on the final page of Doctor Aphra #10, I’d say it’s a tad bit misleading to call this a War of the Bounty Hunters Prelude. Instead, it’s mostly about settling the score between Chelli Aphra and her current employer Domina Tagge, which is fine in theory– I wouldn’t have wanted those narrative threads to have been left dangling– except for the somewhat disingenuous branding on the issue’s cover. 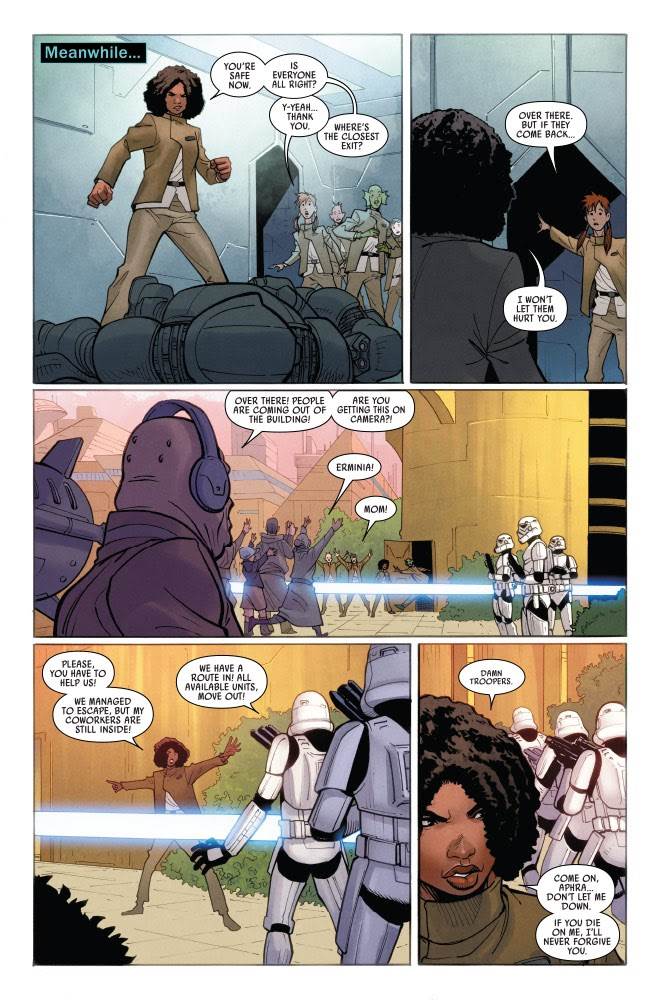 Star Wars: Doctor Aphra #10 opens with the title character caught in the crossfire between the Galactic Empire and the Unbroken Clan, the latter of which has taken siege of a technology firm called De’Rruyet Industries in an attempt to steal an ancient hyperdrive engine left over from the High Republic era. Aphra and her ex-lover Sana Starros bicker about whether they should help rescue the hostages or simply flee the situation, with Sana ultimately nudging Chelli into erring on the side of good. The doctor intervenes in the crisis, offering to repair the so-called Path engine, making it more valuable to the criminal organization led by General Vukorah– not to mention stopping it from exploding and killing everyone present at the laboratory. Meanwhile at Canto Bight, the assassin Just Lucky and his associate Ariole Yu find themselves ensnared in a trap designed to send a warning to their own gang bosses in the Sixth Kin. 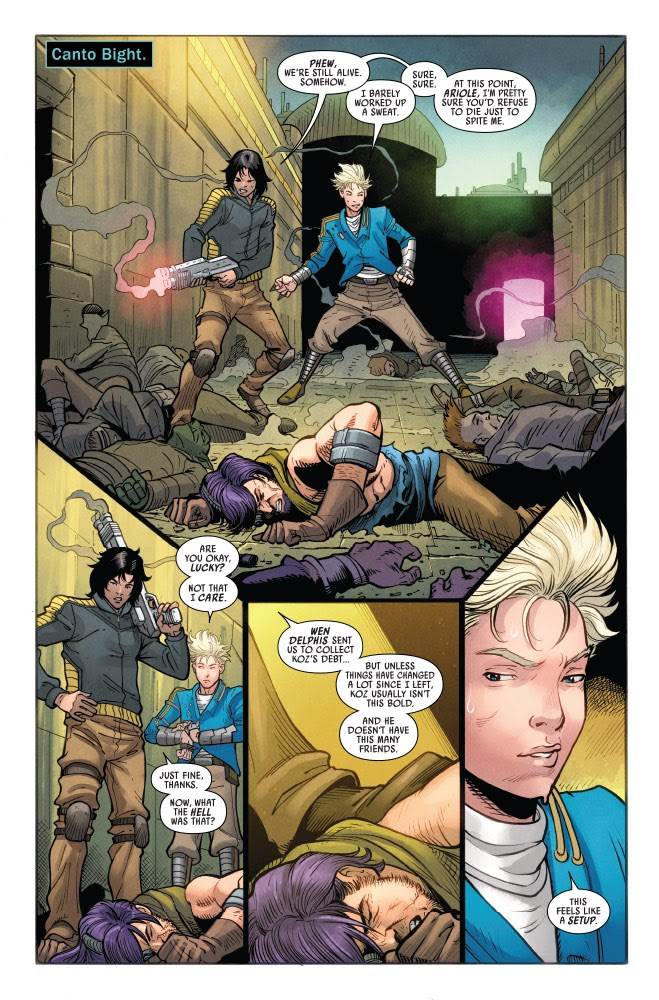 The end of this issue finds Aphra, Starros, Lucky, and Ariole on a collision course that will somehow impact the events of War of the Bounty Hunters, or so we are promised in the final caption. It helps that the previously non-canonical bounty hunter Durge seems to be on their tail, but is this story set to intersect with the pursuit of Han Solo’s carbonite block that we’ve seen in pretty much all the other tie-ins so far? I guess this forces us to ask what the parameters of War of the Bounty Hunters actually are and whether Aphra’s part in things necessarily needs to converge on the paths of the other characters we already know are involved in this event. It’s a strange and exciting thing, to watch this many ordinarily disparate creators get swept up by necessity into a larger driving force like this mega-crossover, and I’m extremely curious to see how things play out as the summer goes on. 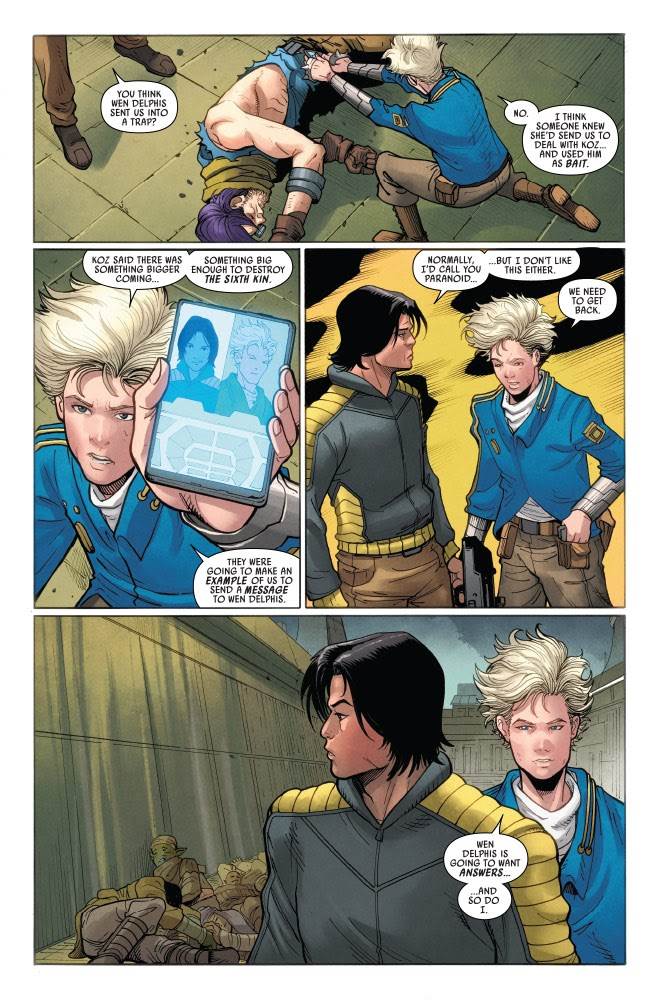