As we get closer and closer to the opening of Avengers Campus at Disney California Adventure, we continue our look at some of the Marvelous details that will be found in the new land. Guests will get to come face to face with some of their favorite Marvel characters, including a few they’ve never been able to meet before. You may even spot the villainous Taskmaster.

In Marvel’s upcoming film Black Widow, Natasha Romanoff will be haunted by a ghost from her past. An assassin who goes by the call sign Taskmaster will terrorize Natasha and her newly reassembled family (not the Avengers one). We’ve gotten a chance to see Taskmaster in action several times in the trailers for the upcoming film.

While very little is known about the MCU version of the character, Taskmaster has been around in Marvel Comics for a long time. He made his debut in “The Avengers #195” in 1980 and proved to be quite the formidable foe. His abilities include a photographic memory and reflexes and expert skills in hand-to-hand combat. In other words, he can watch someone fight just once and immediately copy their style. In the trailer above, we can see him fighting in the style of Hawkeye and Captain America. In the comics, he has taken on not just Black Widow, but also Deadpool, Moon Knight, Captain America and many others. 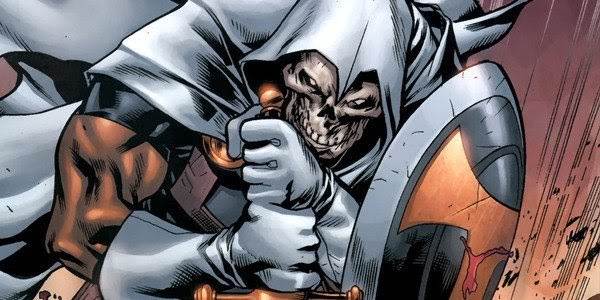 We don’t know much about what this character experience will look like in Avengers Campus. What we do know is that he will be one of many characters guests will get the chance to meet. Of course, he does seem to be the only villainous one. This may be an ominous meet and greet.

In Avengers Campus, guests will have the chance to meet some of their favorite heroes, including Captain America, Iron Man, Thor, Black Panther, Spider-Man, Captain Marvel, the Guardians of the Galaxy and for the first time ever, Ant-Man and the Wasp.