National Geographic’s Secrets of the Whales took audiences under the sea earlier this year to meet some incredible giants of the deep like never before. Sonically swimming alongside you during the experience is a score by composer Raphaelle Thibault, which will also become a live symphony concert experience in 2022. I recently had the pleasure of speaking with the composer about her unique entry into film scoring, her approach to this James Cameron produced project, and why it meant so much to her. 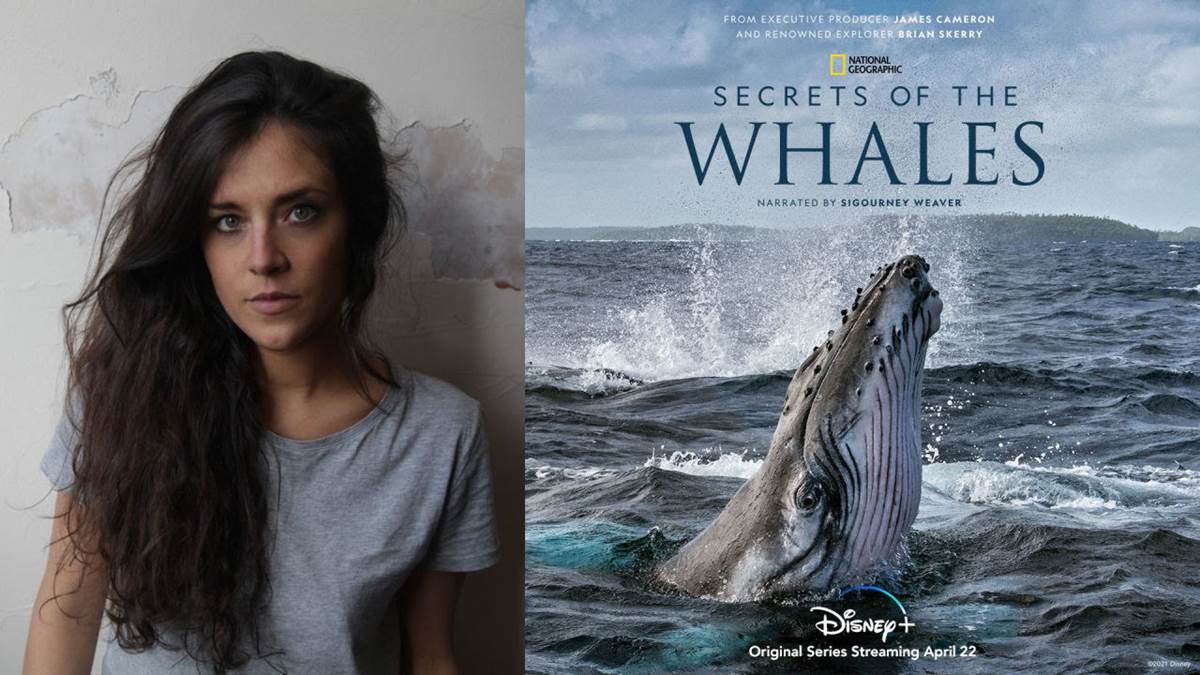 Alex: Your love of piano started because your parents were trying to improve a hearing impairment when you were a child, but you didn't initially pursue music as a career. I was wondering if you can talk a little bit about the start of your career working for Google and how you left that to pursue your passion.

Raphaelle Thibaut: I technically started the piano because I had tons of infections, issues when I was just a baby. And so I think my parents thought that the piano would be a good instrument to kind of re-educate my hearing a little bit, or at least try and help me a little bit with that. I was like four-years-old and that's why I started so early. But yeah, I had this whole classical training when I was a kid and then it's natural, but it was all about performing, right? It was just about performing and reading music, but I knew that I wanted to do something with music, I just didn't know what. And I realized that over time, but then I didn't even know that being a film composer could actually be a job. So to me it was more a dream than anything else. I think I kind of lacked guidance at that time and then I went on. I just started a career in tech and I ended up at Google where I worked for five years. After a life changing event at Abbey Road Studios in 2015, it was just an event organized by Google I was invited to, and so I was invited into the mixing room of Studio Two at Abbey Road and I remember the engineers showing me the process of recording for films. And I was like, I really don't understand everything in this room, but I just knew that it was where I belonged. And two weeks after I left my job at Google, I started as a full-time composer. So yeah, I really started from nothing, but I mean, it was like a lifetime rooted passion for film music already that I had in me.

Alex: Yeah, you didn't just wake up and say, "I'm going to be a composer today."

Raphaelle Thibaut: No, it took me like thirty-years to realize that I could actually do it for a living, but it was in me since I was a little girl.

Alex: You were originally asked to score just the first episode of Secrets of the Whales. Was it a lot of added pressure when they asked you to do the rest of the series or was it kind of an easy transition?

Raphaelle Thibaut: Actually, no, because I don't really remember how it happened, but I just remembered that at very first when we started discussing the possibility for me to score for the show, it was for just one episode. But then when I started composing for it, it went on smoothly and I just ended up doing all of it. But I mean, I guess there was a little bit more pressure when I heard that James Cameron was executive producing. It of course adds a little bit of pressure. You really want to deliver something that tops this. So that was, I think, where the pressure came from more than the rest. But yeah, the process was extremely smooth and I worked mostly with Brian Armstrong, who was the filmmaker for the show with Red Rock Production and Red Rock Films. And it was such a fantastic creative process because it had so much freedom. I was really able to come up with my own creative ideas and angles and it was very empowering, it was a really great experience.

Alex: You were instructed not to use real whale sounds because Brian Skerry had collected a lot of them that would be heard in the film. What was the conversation like when you played your demos and you had created synthesized emulations of whale songs in your score?

Raphaelle Thibaut: I kind of knew that it would make the cut then, that it would work out, because I think I did it in a way that it would never really overstep the existing whale sounds in the first place. For example, I don't know if you noticed, but I especially used them when the music has a lot of room compared to the pictures, because most of the time there's a lot of sound design going on, there's a lot of sound effects, there's a lot of narration, and there are, for example, the pre-title cues. I'd have more freedom with the music because there was just more space, more room for the music and that's where I used a lot of synthetic whale sounds. So I was confident that it would not really overstep too much. And yeah, to be honest, I really wanted to try something. I really wanted to be more like a signature sound that we would find throughout the series. Some sort of signature whale sound that would not be constant, but just peaking at some places like that. So I guess that's why it worked out at the end.

Alex: You mentioned that when you went to Abbey Road, you got to see them mixing the score. On this project, you're credited not only as the composer, but also for producing and mixing. Was that new for you or was that an added challenge trying to do all of those components that are usually split amongst different people?

Raphaelle Thibaut: You know, I think it will always be a challenge for me because my core skills are definitely composing and arranging. And when it comes to mixing, it's definitely something that I had to learn a lot. Before I scored Secrets of the Whales, I did a lot of trailer music and this is the best school when it comes to learning how to mix, right? And how to deal with so many tracks and so many instruments, virtual instruments, at the same time and make sure that your mix still sounds perfect because it's going to be played in theaters. So it was the best school and I think I've learned so much doing trailers. And so that made me feel a little more comfortable about the mixing for that show particularly. But yeah, I think it will always be a challenge for me because it's not my core skill, but it's good to know that you are able to do it, you know?

Alex: Yeah. You wrote music for about four hours of content. There's not much time in the show where there isn't music playing, but the soundtrack release has just under an hour. Did you have a hand in choosing which tracks made it for the soundtrack or did you have to edit your music at all for that release?

Alex: Yeah, and it's a great soundtrack. You mentioned that Nat Geo Live symphony tour that's going to kick off next year. How did that conversation start and what was it like adapting your score, which is mostly digital, for a live symphony experience?

Raphaelle Thibaut: Well, the main difference has been that I've been working hand in hand with my dear orchestrator, Paul, who has been working on every single cue of my tracks for the show to adapt it for a real orchestra. So there were two different kinds of cues, right? There were the cues that were already existing and from day one, I knew they would only be digital. So I had to… There's a lot of creative decisions that you have to make when you know that it's not going to be recorded, at least in my experience, and it's very, very different from composing knowing that it's going to be played. So it gives you more liberty, like more freedom in the sense that you can have one hundred violins if you'd like or you can can use digital, very epic percussion and stuff like that… The challenge is you have to sometimes work around the instrumentation, the melodies, just because you know that it doesn't sound right or it didn't sound bright enough to me or authentic enough, so I had to work around it. So sometimes you don't have to change the melody. And so that was one thing, and the second thing was composing knowing that it would be for the live show and that's where you get more freedom also, because you know that if it doesn't sound exactly the way you want it to sound, it's okay because it's not going to be the final cue. So there is freedom both ways, but it's just very different.

Alex: I know oftentimes when they kick off these live shows, they'll often invite the composer to the first performance. Do you have any plans to be in attendance wherever Nat Geo Live chooses to kick it off?

Raphaelle Thibaut: Oh, I mean I really hope and I bet I will be there. It's just that after a year of frustrations of not being able to meet the team I've been working with for a year now, it's been quite frustrating and I'm really, really looking forward to going and to being with all the people I've worked with for so long and have never met in person. I would fly to Australia for that premiere if I have to. So yes, I'll be there if they have me.

Alex: Great! Well thank you so much for your time, congratulations again. I really love the music in the show and wish you the best with all your future endeavors.

Raphaelle Thibaut: Thank you so much.

Secrets of the Whales is now streaming on Disney+. You can listen to the soundtrack on all major music streaming platforms.