Hello and welcome to Laughing Place’s weekly recap of new episodes of the Disney+ original series Star Wars: The Bad Batch from Lucasfilm Animation. This week’s installment, entitled “Rampage,” is the fifth episode of the show’s first season. 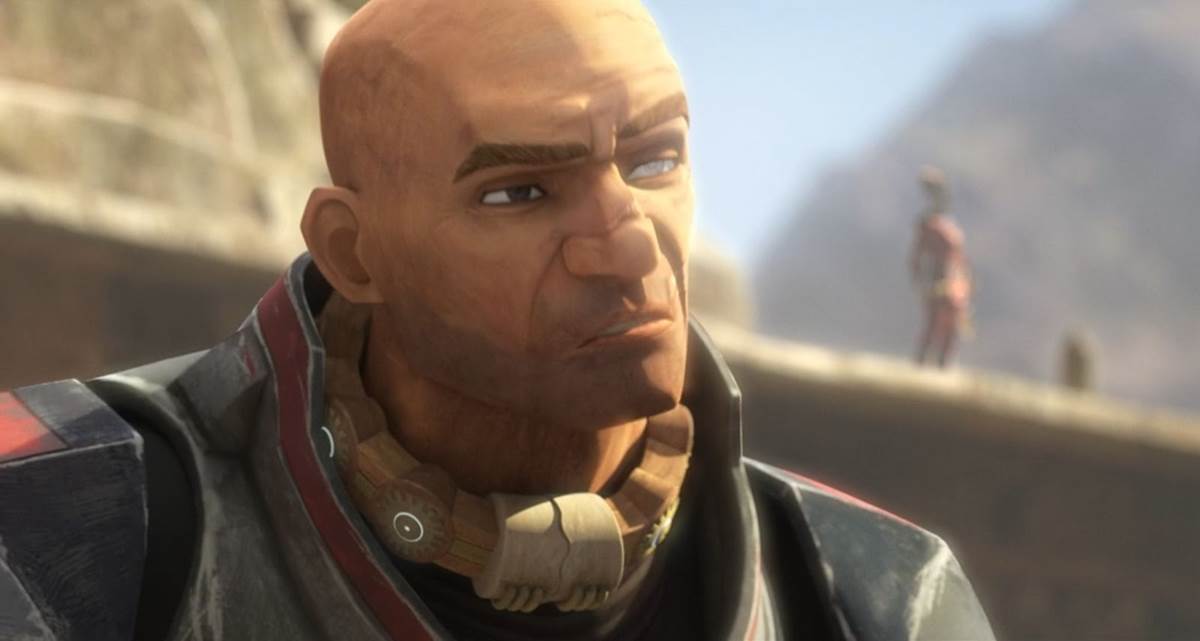 “Rampage” begins with Tech (voiced by Dee Bradley Baker, as are all the members of the Bad Batch) giving Omega (Michelle Ang) her own comm device so she can better stay in touch with her new teammates. The Havoc Marauder is on its way to the planet Ord Mantell because Hunter wants to find out why Fennec Shand was after Omega. Echo says he knows an informant there named Cid who might be able to help, and that the Jedi trusted him. The ship arrives at Ord Mantell, and Omega is instructed not to wander off but to use her comm if she gets into trouble. The squad arrives at an underground gambling den, but Echo doesn’t actually know what Cid looks like. The female Trandoshan proprietor (guest star Rhea Perlman of Cheers fame) claims not to have heard of Cid and tells the Batch to get lost. “I’m certain this is Cid’s. The Jedi came here during the war,” says Echo.

Omega approaches the Trandoshan and says, “You’re Cid,” to which Cid replies, “You’re sharper than your friends over there.” Cid begrudgingly takes Clone Force 99 into the back room of the establishment, where she says the Jedi valued her insights. She doesn’t like the Empire because they wiped out all the Jedi. “Times have changed… for all of us,” says Hunter. The Bad Batch explain that they are deserters and that they encountered Fennec Shand on Pantora. Cid says she can find out who hired Shand, but only if the Batch pulls a job for her in exchange. She wants them to rescue a kid named Muchi from Zygerrian slavers on the other side of the planet, and they’ll split the bounty on Muchi’s head 70-30. Clone Force 99 embarks on their new mission, but Wrecker is still experiencing headaches. They head to the ruins of Old Ord Mantell City while Tech explains to Omega what a slave trader is.

The ship lands in the desert outside the abandoned city, and Tech uses macrobinoculars to spot the slavers. Hunter orders Omega to stay on the Havoc Marauder while the team attempts a “smash and grab” operation to retrieve Muchi. Echo takes a position as the “eyes in the sky” and Wrecker is told to draw the Zygerrians out while Hunter and Tech go after the kid. As the team enters the city, they are stalked by a large lizard-like creature called a brezak, which knocks Echo from his perch and attacks the other members of the Bad Batch. While they’re distracted by the creature, the slave traders approach and stun our heroes. Back in her office, Cid talks with a hologram transmission, assuring her Huttese-speaking contact that his employer will be reunited with Muchi soon. “There’s no need for threats. I have my best people on it.”

On the Havoc Marauder, Omega alters her clone trooper doll to make it look more like “a Bad Batcher.” Then the Zygerrians force their way into the ship and Omega does her best to hide. She slips out an escape hatch and runs off as the slavers ride back to their base on speeder bikes, not having found anything. Omega tries to call her friends on her new comlink but no one answers. She uses the macrobinoculars and sees them chained up with the slaves. In the ruins, Wrecker attempts to break free from his restraints, but the Zygerrians use the collar to shock him. The brezak glides in and sits atop the tower in the middle of the city, from which the slavers watch over their holdings. Wrecker comforts Muchi, and Hunter asks Tech what the odds are that they’ll make it out of this situation. “I am not certain. This is not a standard military operation.”

They spot Omega attempting to sneak into the camp, and signal for her to take cover as the Zygerrian leader comes out to speak to his “new slaves.” Echo cleverly tells him he’s lucky they don’t have their gear in an effort to direct Omega to her goal, and she sneaks toward the team’s equipment but accidentally knocks over a rock in the process. Wrecker tries to use this as a distraction but ends up getting laser-whipped. “We can make do with one less slave. Maybe I’ll feed you to my pet,” says the leader, indicating the brezak. Echo crawls down onto a large metal container and notices another enormous creature inside. She starts to open the cage and is apprehended by one of the guards. “I wasn’t sneaking; I was unlocking,” Omega tells the slavers, revealing that she removed the cage’s locking mechanism. The Zygerrians attempt to secure the lock, but can’t do it before a young rancor bursts out.

The Bad Batch use the ensuing chaos to break free of their chains, but the Zygerrian leader calls the brezak into action, leaping on its back to fly around the camp. Omega tries to comfort the child she thinks is Muchi, but is informed by another one of the slaves that Muchi is actually the name of the rancor. Clone Force 99 sets out to capture Muchi as she runs away, while Omega and Echo get the slaves to safety. Hunter, Tech, and Wrecker come across the Zygerrians whipping Muchi in an attempt to take her back into custody, though she’s “doing fine on her own,” as Wrecker observes when he sees her knocking the slavers around. A Zygerrian tries to shoot Muchi with a laser net, but the rancor knocks him down from the tower. The leader arrives on brezak-back and a brawl breaks out between the two creatures, with the brezak seemingly having the advantage.

Hunter knocks the leader off the brezak, which then pursues the rancor into the city. “You’re going to pay for this, skug,” says the leader as he laser-whips Hunter to the ground and Wrecker and Tech run after Muchi. Hunter successfully knocks out the Zygerrian while Omega and Echo help the slaves escape. Omega finds one of the Zygerrians’ laser bows on the ground and puts it on. The rancor and the brezak duke it out again, but this time Muchi wins out. “Any ideas how to stop that thing?” asks Wrecker as he and Tech approach, and Tech explains that rancors adhere to a social hierarchy. “You have to challenge the alpha for authority.” “Oh, that I can do,” says Wrecker as he runs in to face Muchi in hand-to-hand combat. It’s a tough fight, but Wrecker clobbers the rancor with a big rock and then chokes her with her own chain, Jabba-style.

The slaves thank Echo and Omega for their help and ride off on the speeder bikes, then our protagonists reunity as Wrecker is still wearing Muchi down. The clone and the rancor continue trading pouches until they both pass out from exhaustion. “She’s kinda cute up close,” says Omega. In Cid’s office, Bib Fortuna (Matthew Wood) enters flanked by two Gamorrean guards. “I always deliver on my promises. You’ll see,” Cid reassures Fortuna. “This is a delicate mission. Tell Jabba to be patient.” They hear Muchi roar in the distance and run out to find Clone Force 99 returning with the rancor in tow, Omega riding on her back. Cid collects her payment from Bib Fortuna and the Gamorreans take Muchi back to Jabba the Hutt. “You could have told us we were going after a rancor,” says Echo. “Must’ve slipped my mind,” says Cid as she invites Hunter back to her office.

Cid tells Hunter that the bounty hunter after Echo is named Fennec Shand. “She’s new to the scene, but has already proven herself to be cunning and ruthless.” Cid says it’s unknown who hired Shand, but that she’s working on a direct commission. “With someone like her nipping at your heels, you’re gonna need two things: friends and money. Mostly money.” Cid gives Hunter the Bad Batch’s cut of Muchi’s bounty and says, “There’s more where that came from… if you’re looking for work.” Hunter says he’ll think about it and Cid says Clone Force 99 must be pretty valuable if a bounty hunter of Fennec’s calibur is after them. “Don’t worry; I’m good with secrets,” says Cid, as Hunter looks on, concerned. 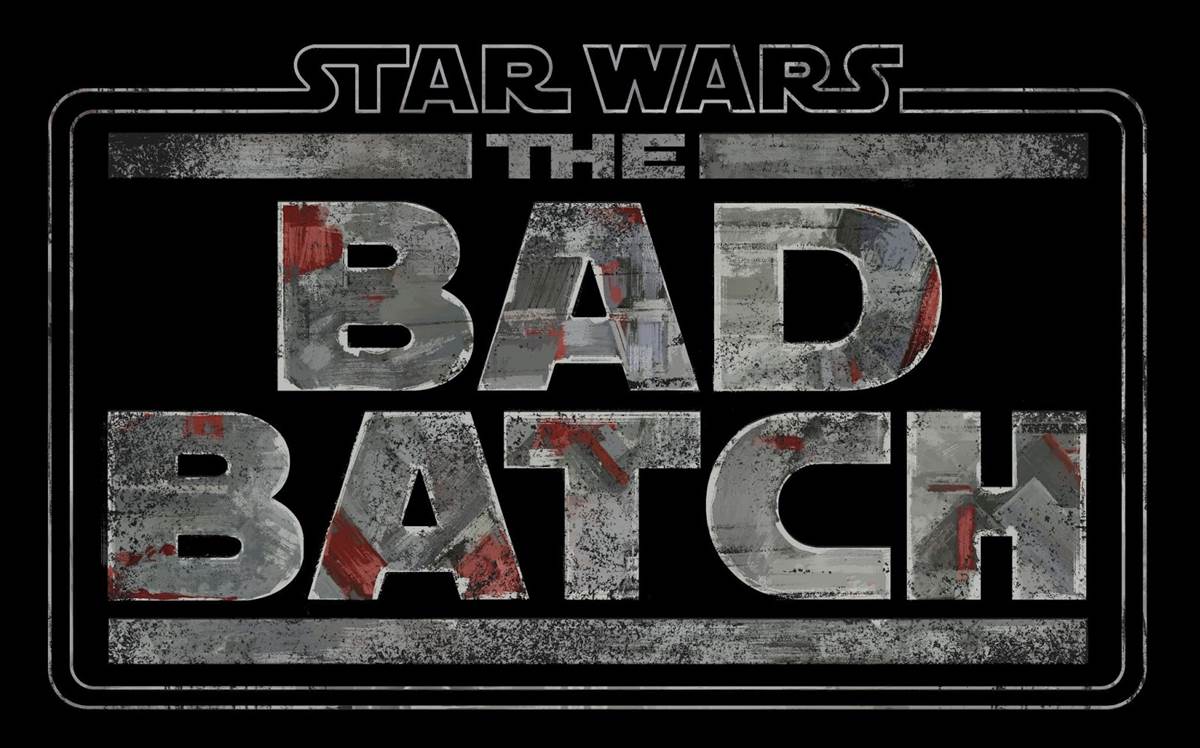