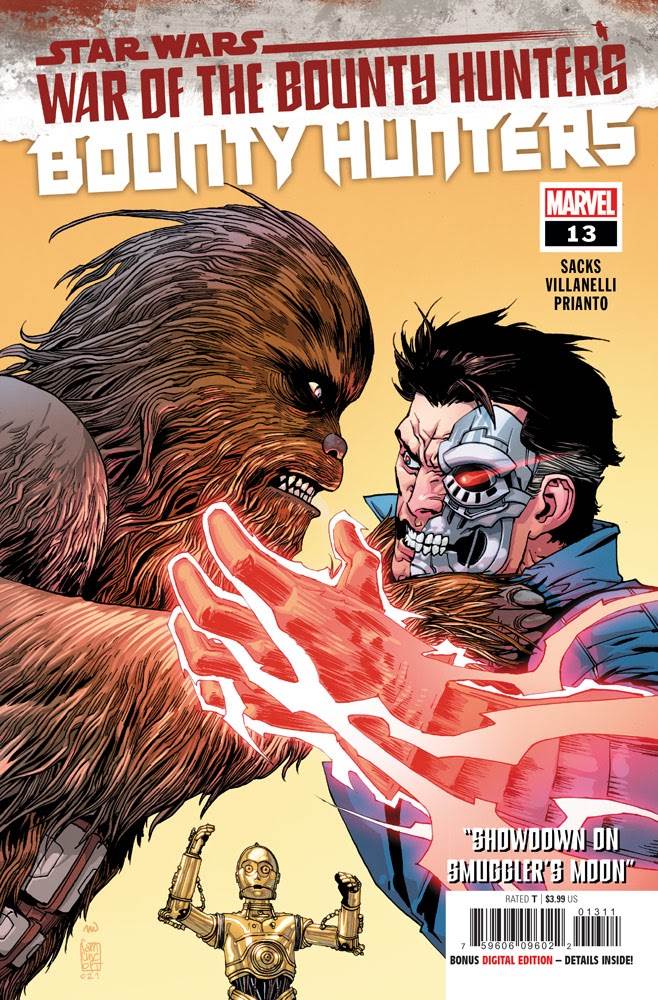 Bounty hunter Beilert Valance owes a debt to Han Solo. We saw the would-be smuggler attempt to save Valance’s life in the Star Wars: Han Solo – Imperial Cadet comic-book miniseries, and we’ve had similar additional flashbacks play out in the current ongoing run of Marvel’s Star Wars: Bounty Hunters, which features Beilert as its chief protagonist.

Now Valance has found out– through an uneasy alliance with fellow hunter Dengar– that Solo has been frozen in carbonite and is seemingly en route to Jabba’s Palace via Boba Fett’s ship Slave I, and he desperately wants to help out his old friend. Acting on a tip that Fett had been spotted on the smugglers’ moon of Nar Shaddaa, Beilert and Dengar seek to confront their Mandalorian-armored colleague and free Han from his solid prison. Tying in with this summer’s highly ambitious Star Wars: War of the Bounty Hunters crossover event, Bounty Hunters #13 opens with Valance rushing through the marketplace of Nar Shaddaa, Dengar in tow. Dengar brings them to an old contact of his who opts to have his goons open fire rather than give any actual information to the hunters, and in the ensuing chase they run across Han’s Wookiee pal Chewbacca and protocol droid C-3PO (both on the smugglers’ moon due to events depicted in the recently released Star Wars #13 by Charles Soule). Naturally there’s some pre-existing tension between these notorious bounty hunters and the rebel heroes, and Chewie isn’t about to let Dengar and Valance breeze by without a fight. Can Valance convince the loyal Wookiee that he’s trying to help Han before he gets his cyborg arms ripped out of their sockets? It’s a pretty exciting brawl in the streets on the path to finding out. Somewhat less interesting is this issue’s B-story, which shifts gears over to the planet Dotharian, located deep within Hutt Space. Here we check in on the characters of T’onga and Losha who seek to track down the crime syndicate heir Cadeliah in order to… well, I’m honestly not 100% sure of their motivations at this point, but they do run into some roadblocks in the form of Lord Khamdek from the Mourner’s Wail Syndicate. This stuff is all kind of muddled and confusing, and I kind of wish writer Ethan Sacks had pushed this subplot aside until after War of the Bounty Hunters comes to an end. I can imagine someone trying to follow the crossover without having read previous issues of Bounty Hunters and being even more bewildered by this than I am. But the good news is that every time Sacks and artist Paolo Villainelli cut back to Nar Shaddaa things instantly get a whole lot more exciting and interesting. There’s even a cliffhanger reveal of a returning character so obscure in the current Star Wars canon that I had to look her up on Wookieepedia. I can’t help but wonder if Valance is going to follow Chewbacca’s not-so-subtle request to abandon his search for Han Solo, but I’m certain that’s something we’ll find out next month. 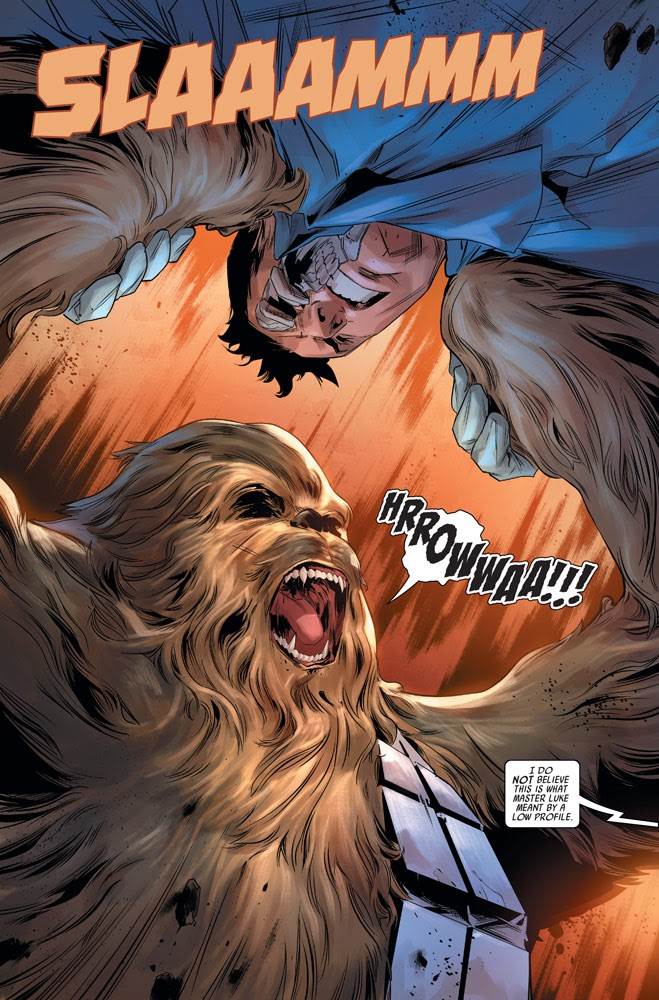