Touchstone and Beyond: A History of Disney’s “Bad Company”

Blockbuster Bombs continues with this weeks Jerry Bruckheimer produced Bad Company. The movie had all the ingredients for success with stars Chris Rock and Anthony Hopkins, director Joel Schumacher, and a plot that people would recognize yet it would disappoint financially and critically when it was released in 2002. 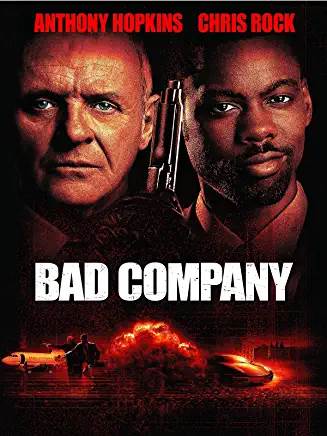 Jake Hayes (Chris Rock) is a street-smart ticket scalper and chess master just trying to get by. His life changes dramatically when his girlfriend Julie (Kerry Washington) plans to leave him because she sees no future in their relationship, and CIA agent Oakes (Anthony Hopkins) informs him that his long-lost twin brother died on a mission, and the CIA needs his help.

After some financial compensation is offered, Jake agrees to assume the role of his brother. His job is to negotiate the sale of a suitcase bomb from a former Russian colonel. Plans go awry as Jake submerges deeper into the world of arms dealing, and he and Oakes work together to save a kidnapped Julie, but the rest of New York City from a nuclear explosion.

Anthony Hopkins does his best to make the character of Oakes shine throughout the film. The audience can see how Hopkins tries to elevate his character beyond the standard tropes and thankfully he can bring a little sparkle to the role.

Chris Rock is funny throughout the film, and you will laugh when his Jake Hayes is riffing on life and the other characters.

Chris Rock is funny in the film, but for most of the movie it feels like Rock has walked into the scene with the thought of doing a bit from his standup routine while being shot at by the bad guys. While it is humorous, Rock’s observations take the seriousness out of the situation and slows down the film.

There is nothing special that makes Bad Company stand out. The Jerry Bruckheimer films of the 1990’s and early 2000’s have been labelled as paint by numbers action films with a stable of actors that appear in supporting roles in multiple films. There are some genuine smash hit films that I have loved which fall into this category because they stand out. Bad Company never gets a moment to differentiate itself from the paint by numbers recipe. The true villain of the movie isn’t revealed until much later into the pic, the Jake Hayes character doesn’t feel genuine, Oakes looks like he should be in charge and not John Slattery’s character.

Kerry Washington gets placed into the damsel in distress role and isn’t given much else to do in the movie. This is a shame.

Bad Company follows the standard ingredients for Bruckheimer action films, and while you will laugh at Chris Rock’s humor, the movie fails to rise to the occasion of greatness or even entertainment.

Critics and audiences alike lambasted Bad Company as being shallow and filled with gimmicks that never allowed the characters to connect with the audience. I am forced to agree with this almost twenty-year-old assessment. I give Bad Company 1 Golden Popcorn Bucket Award. You may enjoy the show, but if you miss it, you are not missing out.

Next week we look at another expected blockbuster that misfired. Michael Crichton’s book Eaters of the Dead had the pedigree for a blockbuster. The movie was retitled The 13th Warrior and even Antonio Banderas couldn’t stop the film from bombing at the box office.