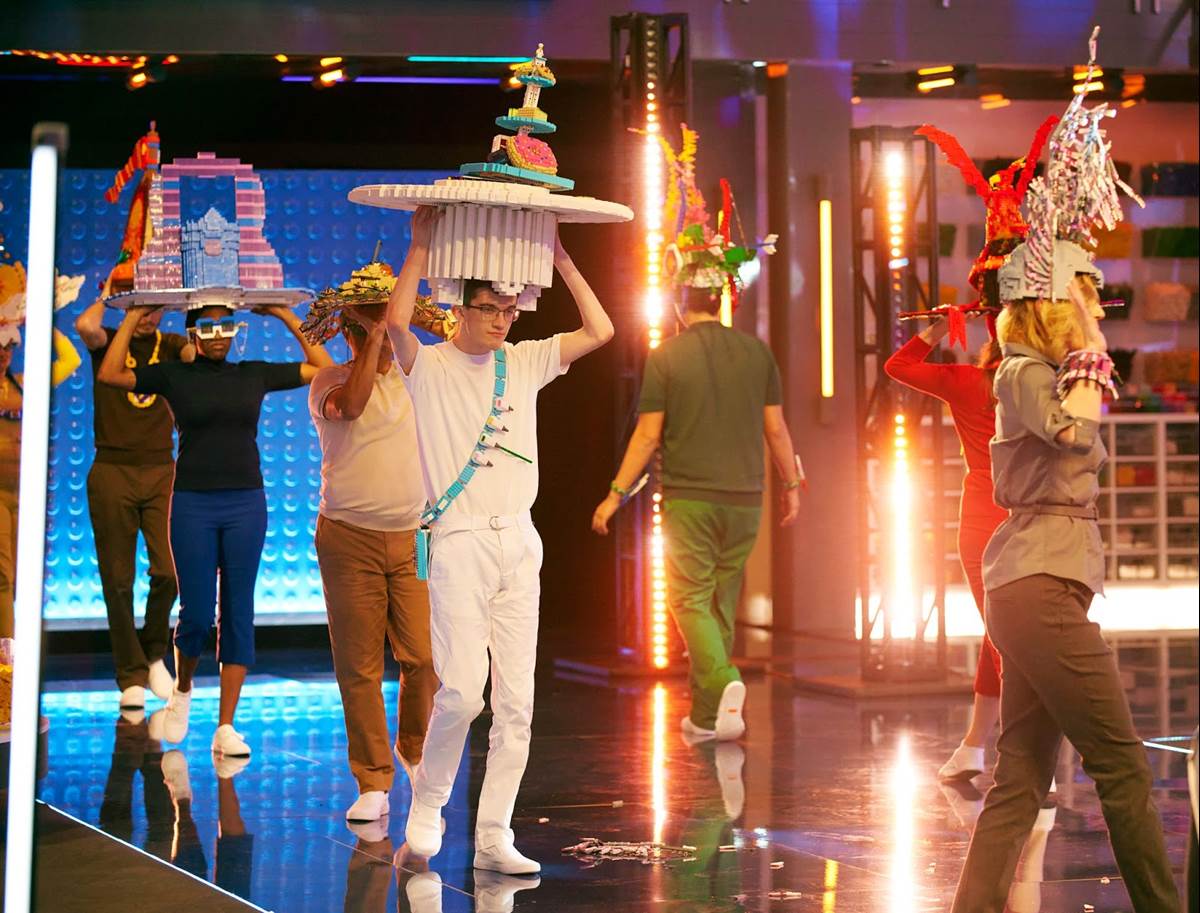 As the hit reality competition series LEGO Masters continues its second American season on FOX, we’ve reached the third installment of Laughing Place’s interviews with the eliminated teams of contestants.

This week, LEGO Masters said goodbye to the engineer team of Paras and Moto, who I had the terrific opportunity to speak with after their departure episode aired Tuesday night. Mike Celestino, Laughing Place:  Can you tell me about your history with LEGO before participating in LEGO Masters?

Paras:  Well, I'm an engineer, Moto and I are both engineers and started a few companies and whatnot. But I think the big thing for me is that I started a nonprofit called NextGen SmartyPants– we teach STEAM education and use LEGO in a vast majority of our programs. I learned that it's just a fantastic tool to communicate technical information to a child, in particular. I started getting into it after my daughter was born and I just haven't stopped.

Moto:  I built LEGO with my brother in my childhood and stopped at around 13 in the mid-80s, went into a dark age, and then was reintroduced to LEGO through my small art director who got a set from Uncle and was not chewing on the brick and was putting it together and having a blast. From there, I was buying thrift-store LEGO and restoring it on the cheap and came across my own childhood sets, which set off my desire to collect my childhood history memories. About a year later I started to build MOCs, so I've been doing MOC building for about four and a half years, but I've been AFOL for about five and a half. I joined the local Denver LUG and went to some local conventions and shows and then got to know the cast of season one through YouTube live streams and other social media platforms. From there, [I] went through casting and was on the show, so it's been a heck of a crazy ride to go from just some builder out in the middle of Denver to being on network television. Quite a change. 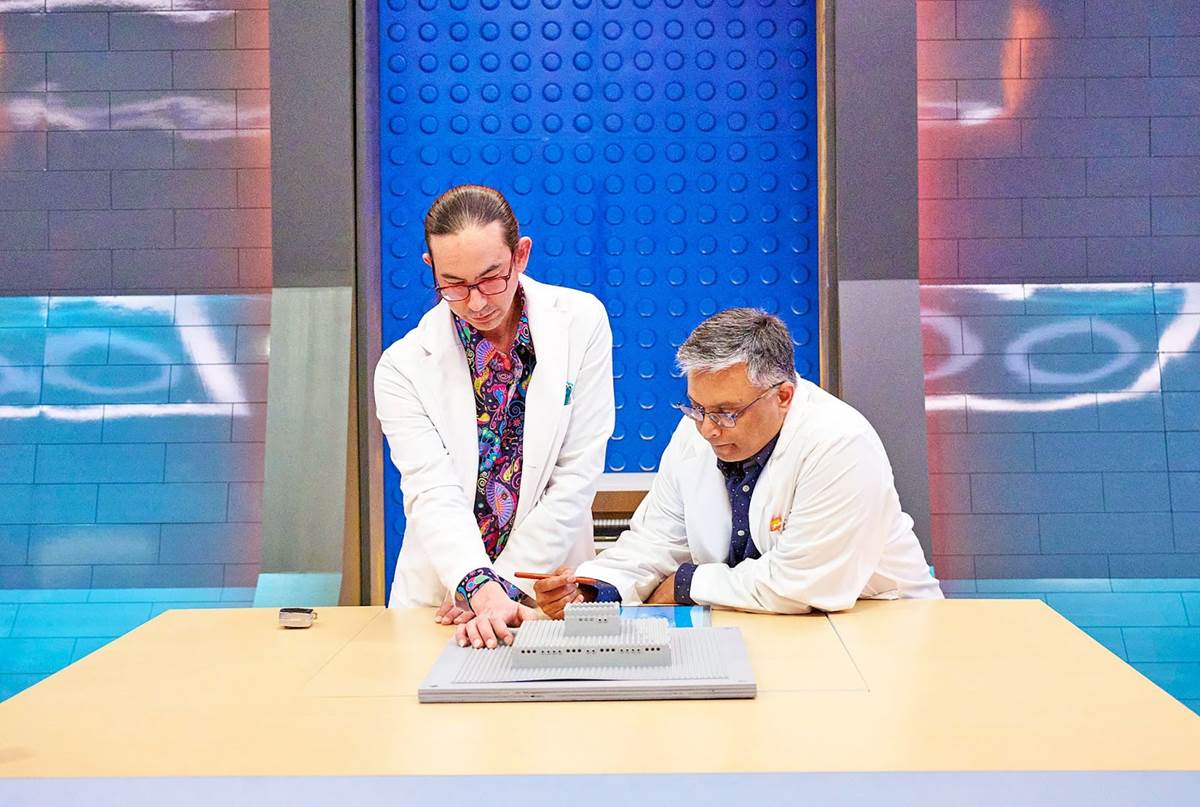 LP:  What was your favorite or least favorite parts of the experience of shooting LEGO Masters?

Moto:  For me, the worst part is ‘Clockzilla’ and building under the clock, and the best part is what happens afterwards. Once Clockzilla has had its way with you and you're done and your hands are off the table, there is a reset that occurs and there's this moment in time where all the builders can go through the gallery and look at all the creations that have been completed. It's the best time because there's nothing like seeing these amazing builds up close and in person, and having the time and space to really pay attention to the details that go into them and ask questions and really celebrate that. I think it translates well into the judging portion, but there's still nothing like seeing these incredible achievements as an AFOL, to dig into the structure and the techniques and the NPU and all the little bits that were put into there. It's just a fantastic experience and a nice celebration.

LP:  The challenge that got you guys eliminated was ‘Hats Incredible!’ If you had this project to attempt again, how might you approach it differently?

Moto:  First I want to say that the competition didn't eliminate us. We eliminated ourselves trying to do the competition. It's very different. I own a hundred percent that this thing fell apart and it didn't go well and we lost. We just simply lost and I own that. But Paras, what would you say if we had a temporal shift and you could swap yourself out somehow, what would you have done differently?

Paras:  I would agree, it was all Moto's fault, really. [laughs]

Paras:  No, I'm just joking, I would never say that. Let's see… it was the hardest build I've ever worked on. It's a lot to expect. We had to create this thing that was fashionable and at least two feet high off the top of my head and balanced. I mean, if you had this ability to go back, you try and learn from everything you can. So I guess I would say that one of the things I learned was to try and make it as light as you can. Inertia is a big deal, especially if you're going to try and move something. Trying to have that balance of structural integrity, lightweight, as well as being aesthetically pleasing. It's quite the combination. Moto:  Yeah, when I think back, Paras and I did talk about two different ways to come at building this thing. And the other way might've worked… maybe not, who can say? But I know that we did discuss various approaches and then settling on one to go forward with as our best decision makes me think, no matter how many times we would go back and try it again, I still would go with what we did with no regrets, simply because we did talk about multiple ways of engineering this thing. Coming up with the Mixel fabric on the bottom as well as the tall post on the top was the way we went. So yeah, I mean… ‘shoulda woulda coulda.’ [We] definitely could have made the [sections] split better, but at the time I think we put everything we had into it and it just didn't go our way. The judges had it right. We were pushing the boundaries pretty far on what we could do.

Paras:  Yeah, absolutely. We went out with a bang.

Moto:  It was a crack, but yeah. Could have been a bang. [laughs]

LP:  Tell me about some of the personal interactions that you had on the show, both with the other contestants and with the judges, Amy and Jamie, or even the host Will Arnett. Does anything stand out to you from getting to meet and interact with those folks?

Moto:  Will Arnett is as hysterical as you would expect him to be. He's so fast that I couldn't really keep up with him as far as pacing and where he was going. Whenever he came over, it [was] a really wild ride [trying] to keep up with the rate at which he's able to spin out jokes and keep it fun. But then he can also transition into a very understanding host [who] knows where you are. There were times where he was really supportive and kind and understanding, but also he'd run up to your table and just be like, ‘Bang bang bang bang bang. I know you guys are busy.’ Then he'd do his thing as fast as he could, and then he'd get out. Whereas other times, it was very much like, ‘Will's there, Will's there, Will's there for a while,’ and then you get back to building. As far as the judges… it's Jamie and Amy. These are the people I've always wanted to meet and I look up to and are standard bearers for LEGO itself, and oversee entire teams of talented designers with amazing themes. I mean, you can't go through the roster of their accomplishments. So to have them there and giving you feedback, and taking that in and understanding that they're right, and trying to pull it off is another component. But just being able to meet them, at least say a couple ‘hellos’ and ‘goodbyes,’ is amazing to know that they were there in our space and talked to us. Then the other cast members, I can't say enough about them. There's no time. We're all an incredibly tight knit family. They're amazing and we send chats to each other every day.

LP:  Lastly, what advice might you give to future contestants on LEGO Masters?

Paras:  I would say, ‘Love what you're doing and just keep building, keep experimenting, keep trying new things. Learn from other people's MOCs. Push the boundaries of the pieces that you have, because that's what it's going to take to succeed in this arena, for sure.’

Moto:  I would say, ‘Please play well. Please understand the philosophy of what that means. Attempt to live your life that way. The technical [aspect] and all the other skills are going to come along, but really fundamentally you should be playing well with each other and being a very understanding, compassionate person. That's really what the community is about. That's the attitude. I think if you have that attitude first and you're willing to have a hard work ethic, everything else is going to fall in place.’