Summer brings people to the beaches and what else comes to the beach during the summer? Sharks! National Geographic has a variety of shows on Disney+ for their ‘Sharkfest’ and in honor of this new set of programs we look back at one gloriously funny film with a shark attack as a plot point, The Life Aquatic with Steve Zissou. 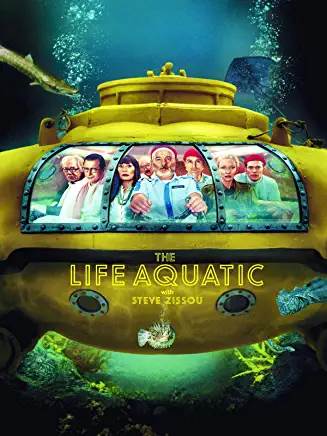 Famed oceanographer Steve Zissou has seen better days. His best friend and partner Esteban died on a recent trip which Steve claims was because he was eaten by the mysterious jaguar shark. With his documentary series failing to attract an audience, and grieving the loss of his friend, Steve is offered a ray of hope in the form of his long-lost son Ned.

Together they set out on one more voyage to capture the shark that killed his friend and offer some redemption to the once promising Steve Zissou. On the high seas with pirates attacking, his marriage to Eleanor spiraling out of control, and competition from fellow adventurer Alastair Hennessey, Zissou is losing hope.

His ship damaged, and the possible loss of a positive media piece by a reporter named Jane, Steve begins to appreciate the crew on his ship including his first mate Klaus, and the family he has often neglected.

Bill Murray is hilarious. He has managed to channel all his personality and create such a complicated and difficult character. At many points throughout the film, Steve Zissou is a jerk that is awful, and then in the next scene, one cannot help but empathize and like him. Steve Zissou is a sarcastic, bombastic, buffoon, who is likeable and someone the audience can root for to succeed.

Director Wes Anderson has taken all the classic Jacques Cousteau documentaries and thrown them into the satirical blender to create this masterpiece. There were multiple moments when watching this film that I felt nostalgia for being back in school watching the Cousteau documentaries about the ocean. The brilliance of The Life Aquatic with Steve Zissou is that we see another more jaded and humorous look at that professional world of oceanography. Jacques Cousteau was a consonant professional. This silly satirical look at the world that Cousteau inhabited is not only fun because its coming at this world from a different lens, but hilarious because of the great Bill Murray.

Willem Dafoe is an unexpected joy in the film. His good-natured Klaus is sweet and kind, but his jealousy of Ned and losing the attention of Steve is something to behold. Dafoe is a brilliant dramatic actor, but this film shows viewers how funny the man is, and I am surprised that he wasn’t nominated for his work.

If you do not enjoy Wes Anderson films then The Life Aquatic with Steve Zissou is probably not for you.

If you have a fond attachment to the acclaimed work done by Jacques Cousteau, you might not enjoy this parody.

I have not been a fan of past Wes Anderson films, but The Life Aquatic with Steve Zissou was hilarious and touching. In past Anderson pics I was unable to connect with the characters because they had been mostly set up as an ensemble piece. The difference that I found with this film is that everyone is reacting off what Bill Murray is bringing to the screen as Zissou. This is a Bill Murray picture, and it shows how unbelievably talented he is when given great material.

The Life Aquatic with Steve Zissou gets a 4 Golden Popcorn Bucket award for being outrageously funny, whimsical, and silly while still maintaining a heart of humanity.

Next week with the Summer Olympics in full swing we dive into the world of Xtreme sports with 2002’s Ultimate X: The Movie.