Behind the Attraction – Jungle Cruise takes a look at Disneyland’s opening day classic, where it showed up around the world, how it spawned a major motion picture, and the influence it had on a whole separate theme park across the country – Disney’s Animal Kingdom. 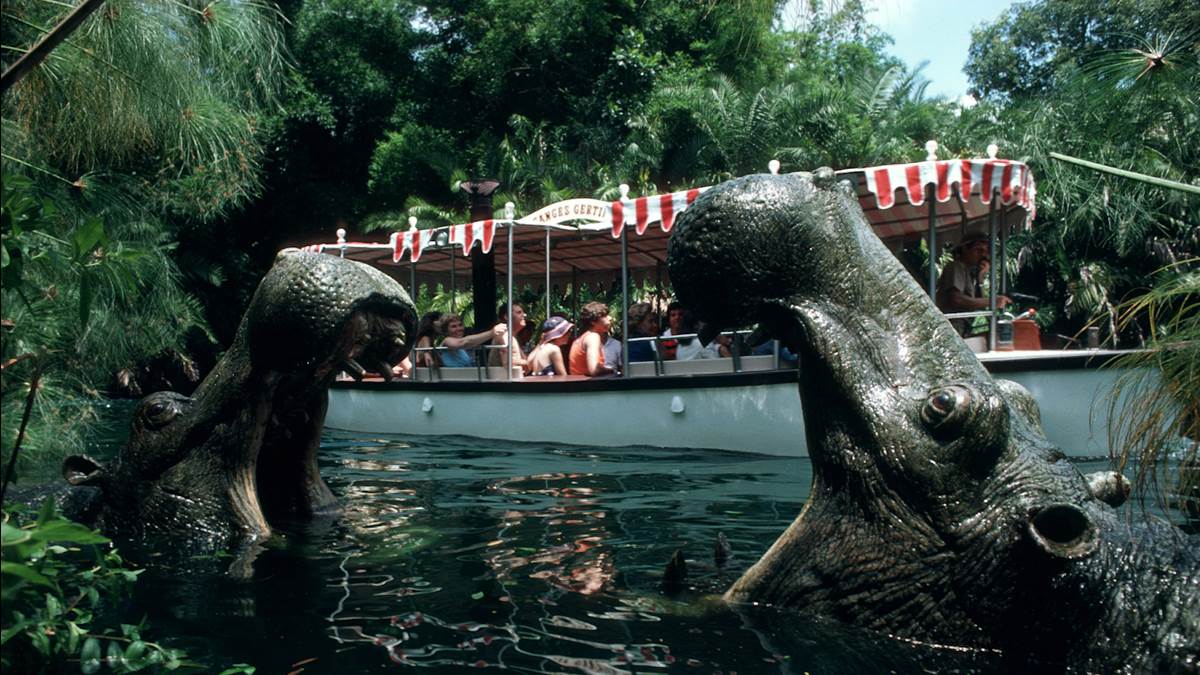 First and foremost I must say that I adore the introduction to this series. It harkens back to the days of Vault Disney on the Disney Channel but mixed with the style of the late 90s computer trivia game The D Show.

Immediately we are taken into and above the deserts of Southern California, showing the dry, arid, landscape with footage reminiscent of the original Soarin’ Over California (Hey, where’s THAT episode?!). Why? Because in the 1950s, these desert landscapes (and orange groves) dominated the landscape of the area that Disneyland would become. And one of these desert landscapes became the exotic and world famous Jungle Cruise.

But where did the idea for taking guests deep into a jungle at Walt’s new park came from? According to this episode, lots of footage.

Starting with reference footage for Bambi, Walt had footage to use for documentary projects, prompting more of these ideas including the first True-Life Adventure film, Seal Island. The success of that first True-Life Adventure prompted many other films in a series that would later make it into his new idea for a place where the whole family can have fun together, Disneyland.

The heart of one of the new areas he would build into the park, Adventureland, would be an attraction similar to what guests would experience in the True-Life Adventure films, but in real life on a big boat ride. Using tons of archival footage, much of which has only been seen by die-hard fans with their copies of the Walt Disney Treasures DVDs,  homemade VHS copies of airings on Disney Channel’s Vault Disney, or the occasional visit to any special D23 Events, the story of the Jungle Cruise is told.

And, I must note that my favorite piece of archival footage of the Jungle Cruise from People and Places: Disneyland USA makes an appearance, and you too can briefly catch a glimpse of a skipper (who is seen in the background) taking a step off the dock and nearly falling into the river.

While briefly going over the origin of Disneyland, we immediately focus on that southeastern corner of the property and how Harper Goff and Bill Evans turned a dry, desert landscape into a thriving tropical paradise. The episode also takes special note to mention that in 1955, travel to exotic places like Africa or the South Pacific was not as common as it was today, making the idea of that part of the park having that look even more enticing.

You can’t talk about the Jungle Cruise without bringing out Imagineer (and former Jungle Cruise Skipper) Kevin Lively, somewhat of a Jungle Cruise historian who shares fun anecdotes, including one with designer Harper Goff and his extremely calculated design expertise of carving out the layout of the river with a stick to tell the bulldozers where to dig. 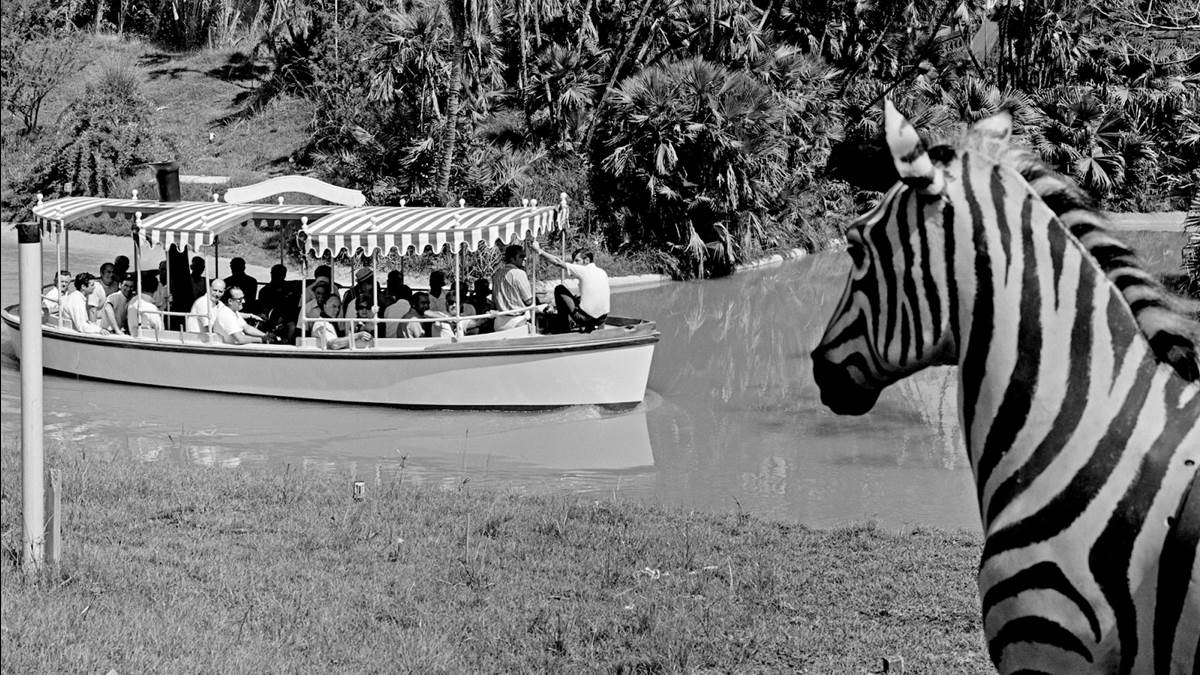 The topic then quickly shifts to landscaping the area and making it the dense, lush, jungle that it is and you can’t talk about plant life in the area without discussing the fan-favorite lore of the Dominguez Palm tree. The late Ron Dominguez makes an appearance in an interview sharing the story of the tree, that it was on his family’s property before Walt bought the property from them, and that it was given to his grandparents as a wedding gift and was not to be destroyed. They mention that it has moved twice in the history of the park, and most importantly as there is a bit of debate about the current location, they show where it is, to the right of the Jungle Cruise entrance in an area used primarily (though, not at the moment) for Fastpass distribution for the Indiana Jones Adventure.

Going back to the True-Life Adventure idea, the original idea of real animals populating the Jungle Cruise is discussed, with archival interview footage of late Imagineer Bruce Gordon sharing that the main reason this was not pursued more heavily was simply animals sleep most of the day, so the cruise would be nowhere as exciting as Walt intended it to be.

This segues into the creation of the animals, and how they turned to the same mechanical trickery that they had learned earlier during production of 20,000 Leagues Under The Sea. But you can’t make a realistic animal without sound, and one of my favorite moments of the episode is when they share that Walt couldn’t sleep in his apartment above the firehouse on Main Street USA if they left the animal noises on. A laughable fact for anyone who already has an intense knowledge of the layout of the park, but if you don’t, don’t worry. They share a map that shows off the proximity of Walt’s Apartment to the Jungle Cruise, and if you never noticed that before, good. That was the whole point in how they designed it. After discussing opening day, they share stories about how the Jungle Cruise operated in those early days, explaining Skipper’s timing and the importance of getting a full show over going through the jungle more efficiently (read: too quickly), and after all that they say “but if you’ve experienced the Jungle Cruise in the last 30 years, this was not the Jungle Cruise you’ve seen.” Explaining that the original cruise was a serious adventure, with little humor (one joke!) and the legend that Walt Disney had overheard a guest say she didn’t want to go on the Jungle Cruise because she had done it before and didn’t want to do it again, prompting a meeting with legendary Imagineer and Animator Marc Davis, who was well known for his funny gags and witty charm in his movies and attractions.

This segment of the episode focuses on how the attraction essentially became Davis’s baby, adding new scenes, sight gags, and the bulk of the story that had been in play until recently. The episode at no point addresses that the attraction is changing and getting a new storyline, but they do briefly mention that the jokes installed in the era are dated and were based on stereotypes that are now recognized as inappropriate.

While inserting disclaimers, I must add on a personal note that as a former ride operator at several parks, the amount of footage they show in this episode of guests standing up and moving around the boat to take pictures or reaching out of the vehicle is astounding. Don’t do this! Please remain seated at all times with your hands, arms, feet, and legs, inside the boat! 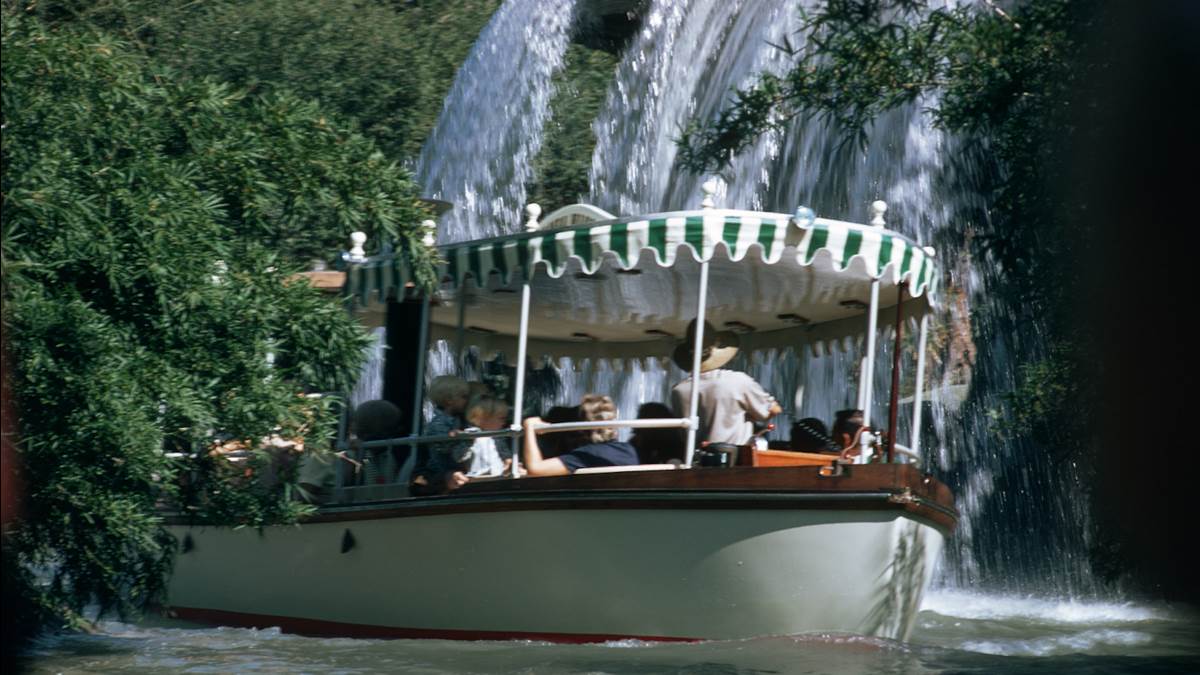 The focus on the episode then shifts to the skippers, who are undoubtedly the heart of the attraction despite all the scene changes. They also discuss the script for the skippers, describing it like a menu where different scenes have different options so not every cruise is the same. They also talk briefly about how the controversial shooting of the gun near (not at!) the hippos is really a signal of their boat’s location to other skippers.

They talk about the most famous joke on the cruise, the backside of water, and even Dwayne Johnson gets in on the fun of that discussion, but they also are quick to point out that the waterfall is an undercover mixing station for the murky green dye to conceal all the mechanics of the river. After a brief mention of Trader Sam, as well as his Enchanted Tiki Bar and Grog Grotto, we then cut back to Dwayne Johnson and learn more about the upcoming film inspired by the attraction, Jungle Cruise. Synergy!

One thing to look forward to, the full circle costuming of the film, with costumes inspired by The African Queen which inspired Harper Goff for the look and feel of the attraction.

Imagineer Jeanette Lomboy also discusses Walt’s original desire for the real animals and the True-Life Adventure series and shares how he would be very impressed that they eventually achieved this with Disney’s Animal Kingdom, counting the Jungle Cruise as one of the landmark immersive experiences that would shape what would came later in the history of the Disney Parks (cue shot of Star Wars: Rise of the Resistance, because why not?!) and that it would be a mainstay along the lines of Sleeping Beauty Castle, something that will always be associated with Disneyland.

As the episode concludes, there is also a nice tribute to Ron Dominguez, who recorded the interview in this episode shortly before he passed.

You can watch the Jungle Cruise episode of Behind the Attraction streaming now on Disney+.