TV Recap: “Gabby Duran and the Unsittables” – “A Song of Gabby and Susie”

This week’s new episode of Gabby Duran and the Unsittables finds Gabby so desperate to win a contest that she teams up with her worst enemy. “A Song of Gabby and Susie” isn’t really about a song, but there is a sort of dolphin call in the episode that likely inspired the title. Here’s a recap of the latest episode of Disney Channel’s hit sitcom. 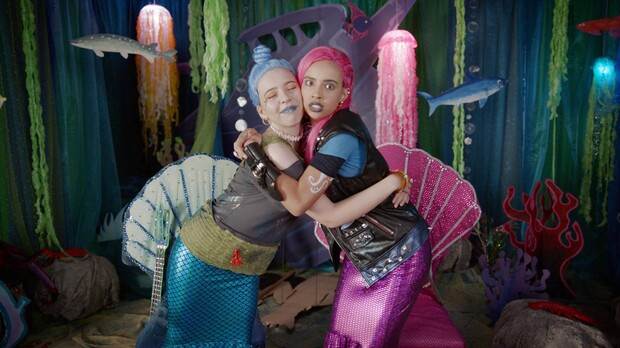 Gabby is excited because the author of her favorite book series, “Best Fins Forever,” is having a contest. She reads Wes a chapter, hoping he will love it as much as she does because the contest requires two best friend fans to submit a video explaining how they would resolve the cliffhanger from the end of the most recent book. Wes reluctantly agrees, but he’s really not into it and doesn’t care about meeting the author, Amelia H. M. F. Barsten.

At school, Gabby and Wes raid the theater’s wardrobe, pulling out a leather vest from West Side Story. While looking for costumes, Gabby hears someone talking about “Best Fins Forever” and pulls aside some clothes to find her nemesis Susie talking with a friend about it. They’re planning to enter the contest and Gabby and Susie start arguing over who is the bigger fan.

At Swift’s house, ORB finishes cleaning the kitchen and goes to the living room to find Swift and Jeremy having an ice pop eating contest. The smart robot warns them both about brain freeze and they both complain about ORB and how she ruins their fun. ORB tells them she is about to go plug in for a system update and will be offline for a week. They both tell ORB that they don’t need her, but just two hours later, the house is a mess and Swift is doubled over suffering from chronic brain freeze.

Gabby and Wes go to Luchachos to work on the “Best Fins Forever” pitch, but while working, Wes tells Gabby he’s holding her back and backs out. Looking over, Gabby sees Susie interviewing other “Best Fins Forever” fans to replace her friend, but nobody can match her level of fandom. Gabby hops into the booth and they quickly realize that they both stand a much better chance of meeting their favorite author if they work together.

Swift realizes that he and Jeremy can’t get on with ORB so he runs out and brings home a replacement named BRO, a knockoff product that looks like it says “ORB” if the box is upside-down. Opening the box, a triangular robot flies out with sunglasses on that talks like a surfer. It instantly starts fixing things and keeps Swift and Jeremy mellow with its vibe and by feeding them beef taquitos. Later, BRO brings them both fruity tropical drinks.

At Susie’s house, Gabby and Susie film their pitch dressed as mermaids with pink and purple hair. After it’s over, they awkwardly compliment each other and Gabby learns that they both have something else in common: an exceptional younger sibling that succeeds at everything without really trying. Gabby invites Susie over to her house to hang out.

In Gabby’s room, Susie shares her fanfic and Gabby tells her about some drawings she made when she was younger that her mom kept. Gabby leaves to go find them and Wes texts Gabby, which pops up on her computer monitor. Susie sees that Wes refers to her as “Ms. Know-it-all” and as she scrolls up, she sees some mean things Gabby said about her.

Jeremy goes to the basement to find BRO about replenishing the ice in his drink when he finds the new robot about to vaporize ORB, who is asleep on a dock. BRO convinces Jeremy that it would be okay to be without ORB, but when Swift walks in, things get a little heated when during BRO’s pitch, he mentions that they will eat beef taquitos all the time if he’s the only bot in the house. Swift tells him he would like some variety and suddenly finds BRO’s vaporizer pointed in his direction.

Gabby returns to her room with her drawings and sees Susie looking mad with her texts open on her computer. They begin to argue again and tell each other that they hope to never see the other again. Just then, both their phones get an alert: They’ve won the contest.

At Amelia H. M. F. Barsten mansion, Gabby and Susie sit in an office with their bright colored wigs on when the author enters, seeming to float to her desk. She tells them that their friendship is an “Inspiration” and gives them a special treat, offering them a single manuscript of the first chapter from the next “Best Fins Forever” book. She leaves the room to give them a moment alone with it and they instantly start fighting over who gets to read it first, pulling off each other’s wigs. Hearing the scuffle, Amelia comes back in and realizes that Gabby and Susie were lying. She grabs the manuscript back and tells them they can read it in a few years when the book comes out. Gabby grabs it from her and they run, being chased by two boys. They find a room and lock themselves inside.

BRO has tied up Jeremy and Swift in the basement and is about to vaporize them. Just then, BRO gets vaporized and through the smoke we see ORB, who has just awoken from the update. Swift tells ORB that they love her and she offers to tell him about her new features. He groans and tells her she’s ruining their fun.

Locked inside a room at Amelia H. M. F. Barsten’s mansion, Gabby and Susie find out together that one of their favorite characters in “Best Fins Forever” gets killed in the first chapter. The boys break into the room and are revealed to be the author’s sons. Before kicking them out, Amelia asks the girls what they thought of the chapter and they both share that they didn’t like it. They feel like the characters aren’t true to themselves and ask the author if she will rewrite it. Amelia proves to be closed to feedback.

The next day at school, Gabby removes the “Best Fins Forever” paraphernalia from inside her locker, telling Wes that it all reminds her off Amelia. Susie comes from around the corner and things are awkward at first, but they start talking about how awkward Amelia’s sons were and things seem better between them. As they go off in separate directions to class, Gabby makes the book’s signature dolphin call of friendship and Susie echoes it back.

Gabby Duran and the Unsittables will return with another new episode on Friday, August 6th. Here’s the official episode description of “The Bubble:”

Scary news headlines inspire Gabby to take on all the world’s issues at once by assembling a team of aliens to combat it, but she accidentally releases a whole new calamity.