“Honesty, integrity, loyalty.” These are the three principles that guide the “Dog Whisperer”’s approach to training and he’s doing it “One pack at a time.” In his newest National Geographic series, Cesar Millan: Better Human, Better Dog, audiences not only get to see Cesar help dogs and their families make progress towards their unique goals, but also learn these same techniques for themselves. 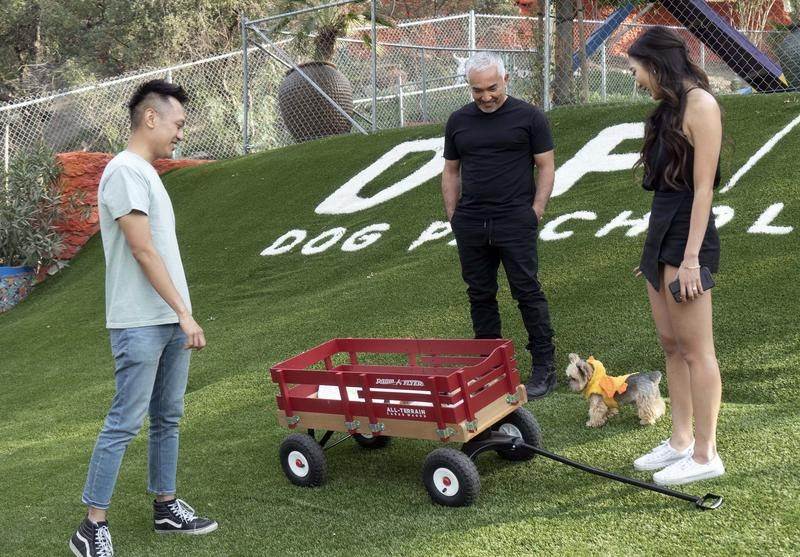 Premiering Friday, July 30th with a double-episode debut on Nat Geo WILD, viewers will meet three families who are in desperate need of Cesar Millan’s special skills. In “Fit For Service,” a blended family has a temperamental pitbull named Goliath who they’ve been afraid to introduce to their child. And Cesar gets a celebrity client in the form of Ducky, an Instagram famous terrier who has some aggressive tendencies when he’s not charming his followers with adorable photos.

The second episode, “One Brick at a Time,” is completely focused on Shadow, an Australian kelpie rescued by 68-year-old Judy. Shadow’s fixation on backyard bricks and constant energy level is putting a damper on Judy’s retirement and Caesar will have to work closely with both Judy and Shadow in order to resolve the situation. This is truly a special episode and longtime fans of Cesar Millan should note that the famous dog trainer confesses this to be one of the “Most rewarding transformations” of his career.

As the title suggests, Cesar Millan: Better Human, Better Dog is not just about Cesar Millan training a dog and walking away. He’s just as hands-on with the dog’s owners, sometimes moreso. Each episode is a bit of a human interest story, with the pawrents opening up their lives for the show. As interesting as it is to watch Cesar work his magic with the adorable canine stars, what will keep viewers coming back week after week is the emotional heart of the show. If you were a loyal viewer of The Dog Whisperer, you may be asking yourself what Cesar Millan: Better Human, Better Dog has to offer that you haven’t already seen before. As the host makes clear in the series’ introduction, there was not only an increase in pet adoptions during the pandemic, but there are also so many new tech distractions to occupy a pet parent’s time, which can hinder the relationship between owner and pet. In other words, there are a lot of brand-new stories and scenarios to keep Cesar’s newest series feeling fresh 16-years after he made his television debut.