Both Walt Disney Animation Studios and Pixar Animation Studios have their own experimental short film incubators. Pixar’s SparkShorts program typically puts out some very deep and introspective stories whereas Disney’s Short Circuit films are typically lighter, happier and more uplifting. In the second season of Short Circuit shorts, there are a few projects that feel a little more in line with what viewers expect from Pixar and Songs to Sing in the Dark is one of them. 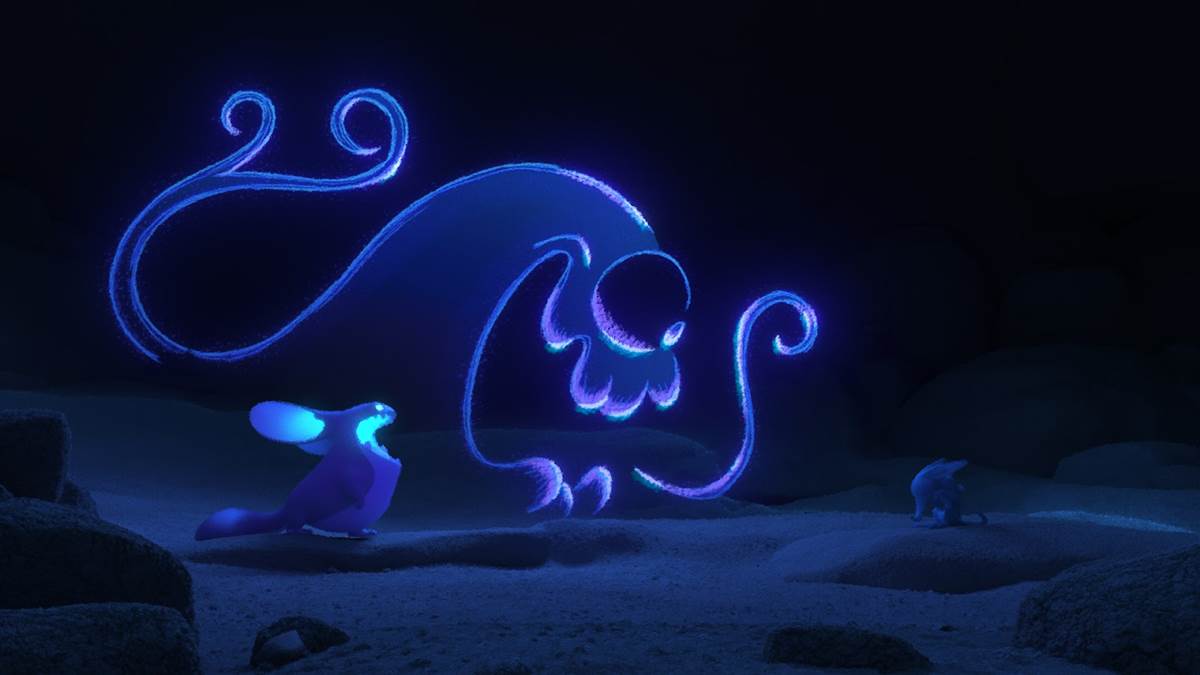 Two creatures are stumbling around in the dark, presumably a cave, and both have the ability to startle predators with lights that make them appear bigger than they really are. Using red and blue light shapes, these two creatures soon realize that neither is a threat and begin to play. But when trouble arises, they find out that they are more powerful together than apart.

Directed by animator Riannon Delanoy, the filmmaker’s introduction explains her childhood love of the natural world and her scientific interest in senses that other animals have, such as echolocation. That was the primary inspiration behind Songs to Sing in the Dark, mixed with her passion for the Studio Ghibli film Princess Mononoke, which features its own unique monsters.

The monsters all appear in shades of grey, almost like a sonogram (images created by soundwaves), but the lighted shapes they emit are brightly colored. Each creature has their own signature color, red and blue representing the two main characters. The shapes have a chalk-like texture, making the visual dynamics of the short very appealing.

While most of the Short Circuit films are suitable for all ages, Songs to Sing in the Dark may be a little too dark and scary for younger viewers. Parents may want to screen it before showing it to preschool-aged kids, but there is no objectionable content to be found. If they’re fine watching a Pokémon battle in a video game or TV show, they shouldn’t have a problem with this short.