Five new animated short films from Walt Disney Animation Studios’ Short Circuit experimental films program are now streaming on Disney+ and I had the pleasure of speaking with all five directors and production manager Jennifer Newfield. Dinosaur Barbarian, Going Home, Crosswalk, Songs to Sing in the Dark and No. 2 to Kettering are stylistically and tonally very different. If you didn’t know better, you might think they were done by completely different studios. 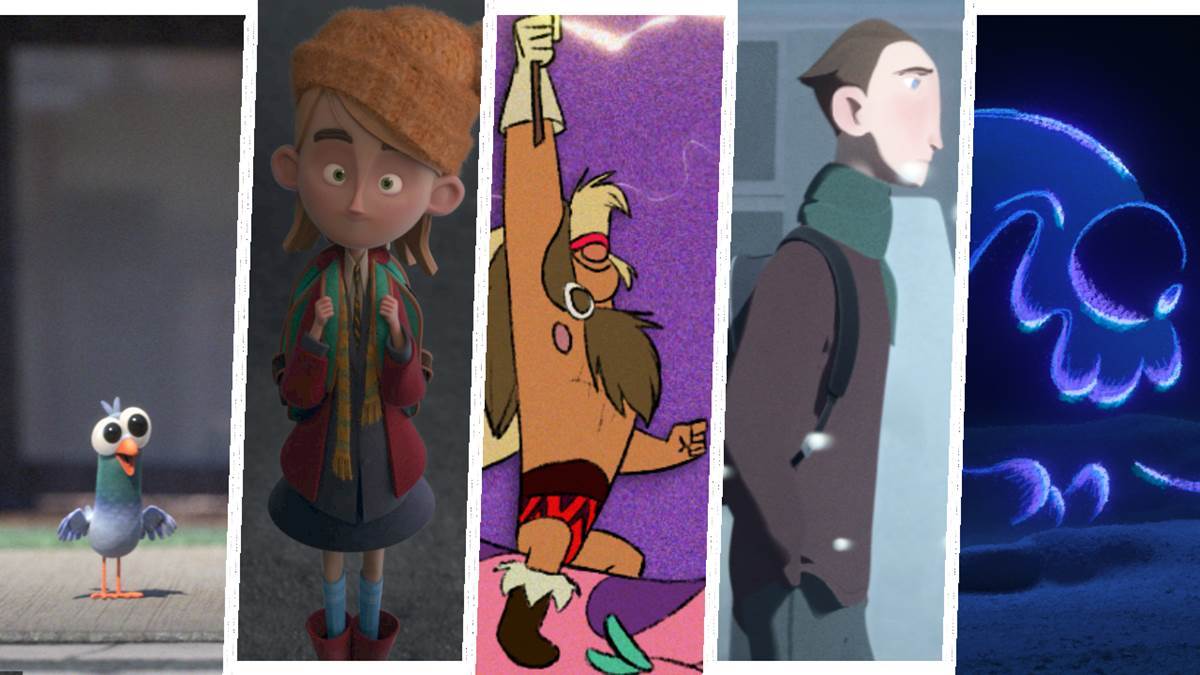 “I'd say that what we do at the studio normally is pretty different than the way that Short Circuit's run,” shared Jennifer Newfield, who oversaw each of these projects as production manager. “I think that's part of the introductory education piece for everyone who enters into Short Circuit is holding hands to agree that we're going to do something different both visually, stylistically, and workflow-wise. For me, it is keeping me on my toes every single time of saying, ‘How can we accomplish what you're trying to build in a condensed period of time, and a condensed screen run time, essentially? How can I best roll back into my skill set, and think about all my pipeline experience, and try my hardest to support the directors in the way that their specific shorts need?’”

In the cast of Kim Hazel’s Dinosaur Barbarian, what the short needed was the go back in time, not just in the tone of the 1980’s style TV intro, but also back to hand-drawn animation. “Dinosaur Barbarian is actually a mix of hand-drawn on paper 2D animation and digitally done 2D animation in the computer,” Kim revealed when asked about the style of her short, which also looks like it was painted on cels rather than utilizing the CAPS system. “That celluloid look was easy to accomplish with both. It's a digital effect that we did, but I think it's really successful. It was really important for me to have something that reflected both 2D cartoons from the eighties, but also my favorite era of Disney films, which is the Xerox era, like 101 Dalmatians and The Jungle Book. And I really wanted those two things together to be the final look.”

Digging back even further in the history of Walt Disney Animation Studios, claymation hasn’t really been done in-house since the 1980’s when Tim Burton was allowed to create his own experimental short films that predate the existence of Short Circuit. And while no clay was harmed in the making of this wave of films, two shorts in this series look like they could’ve been made by Rankin/Bass or Laika. “The look of it essentially was an evolution,” Ryan Green shared about Crosswalk, for which he personally animated the hand-drawn intro. “I talked about how this is like a little editorial cartoon, a little dose of a social commentary. And so when I kept saying miniature, the team started saying, ‘Well, how about like stop motion style?"’And so we started looking at little, tiny sets and little characters and they're lit differently. And then if you have a closeup on something that has super oversized textures, it's a little different experience. So we really had to try and work with that, with the technology that we had and make it look correct, so that was a bit of a challenge that was kind of fun.”

Liza Rhea’s No. 2 to Kettering is based on her own childhood taking public transit to school, but as an environmental modeler, making all of the characters look hand modeled was a personal choice. “I really wanted to create kind of like chunky bolts and have this very oversized feel when it came to the environment in relation to the characters” Liza revealed. “And that too for the textures. We use a lot of oversized textures and it was mostly because it's from a true story that I experienced. So I wanted the textures and the environment to feel very tactile, like you can just reach in and touch it.”

The other two shorts in this collection are unquestionably computer animated, but they also have their own unique style. It may not be obvious at first, but Songs to Sing in the Dark is actually a blending of both computer and hand-drawn animation.  “I was really inspired by images of sonographs, the grain, it's actually like a lack of resolution in a sound image like that,” director Riannon Delanoy explained. “I wanted to transmit that into the short and also help marry the 3D and the 2D. So the 3d has post-processing on it to make it a little grainy, but then the drawing itself is rendered with a chalky line… Also, the drawing itself is turned into a light emissive object, so it actually lights the 3D environment as well. So there were a lot of things we tried to get them to look married in the same space, even though they're different mediums.”

For Jacob Frey, who tells a personal story about how much changes every time he visits his hometown in Germany, the only way to achieve his vision was with computer animation. “There were definitely a lot of challenges due to the time lapse in the beginning,” he shared, adding that the scope of his project required some visual compromises. “In order to achieve that, we were actually trying to strategize a little bit, whether we could make the look of the film a little bit simpler. So, because I wanted to have it look very realistic, and because I'm very inspired by live-action films, we just gathered a smaller team to really strategize. And to find this a little bit more painterly look with simpler textures that allowed us really to just sprinkle that same texture on every building, change the color and make it look like an entire city. There was quite the R&D process involved before moving into this project.”

As the second season of Short Circuit, these five new shorts will live alongside the introductory wave that debuted last year on Disney+. But for Jennifer Newfield, who has played a part in all of the shorts, it just keeps getting more and more exciting. “I think there's so many aspects that all these filmmakers bring to the table,” she shared. “What's just thrilling about Short Circuit as a program overall is that we're always looking for new and innovative ideas. All these brand new directors get to bring something different to the table. Plus, I think what's so lovely about the program, as it goes over time… Is that the directors get to influence each other. They get to pay it forward almost from their shorts to the next season, and get to bolster each other up and help each other have different creative visions come to the screen. I think they're all really excited about exploring new mediums, or at least new ways of working with the tools that we have in our studio. That encouragement just ends up with something unique on-screen every time a short rolls through. I really enjoyed seeing everything evolve and everybody supporting each other as we go through the different rounds of Short Circuit.”

Want to hear more from these directors and Jennifer Newfield? Check out our video interviews below.