Disney Channel steps up their DCOM game with Spin, premiering Friday, August 13th. Everything about the film feels like a real turning point for the network, not only telling an inclusive story about an underrepresented group, but also with a richer narrative than your typical Disney Channel fare. It may be rated TV-G, but there’s a lot to love about Spin regardless of your age. 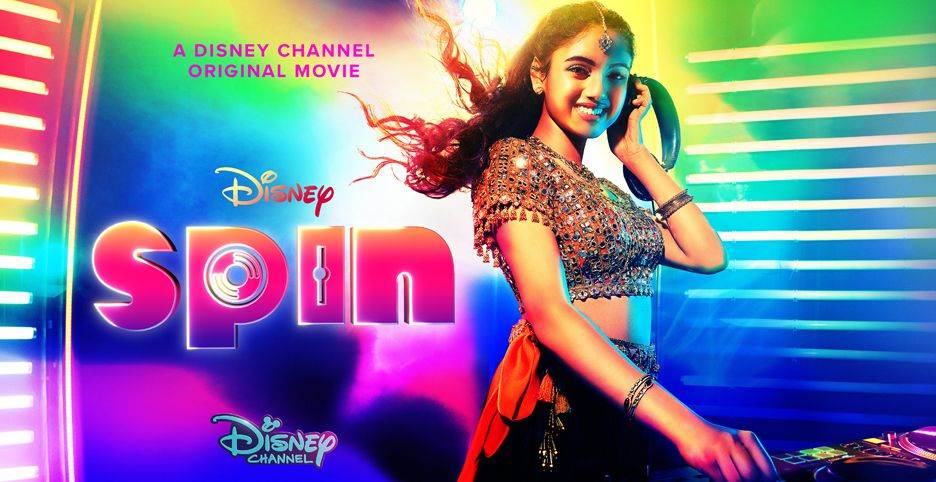 Rhea (Avantika, Diary of a Future President) is an Indian American teenager who loves coding in her freetime when she’s not working at her father’s restaurant, Spirit of India. When she meets exchange student Max (Michael Bishop), she reconnects with the love of music that was instilled in Rhea by her mother before she passed away. But with a schedule already stretched thin, can Rhea actually make room in her life for a new passion and a potential love interest?

The film very much leans into Indian culture, not only through the foods served in the family restaurant, but also the music Rhea creates and the holiday Holi, which inspires a school fundraiser called “Festival of Color.” The family dynamic depicted is also one that many multigenerational families will recognize, with Rhea’s maternal grandmother (Meera Syal, Doctor Strange) not only living with the family, but also assisting with the care of the kids and management of the business.

With a main theme of following your dreams, Spin tells an inspiring story that feels very Disney. The narrative is more cinematic than most DCOM’s, with the cinematography opting for a wider aspect ratio to match it. While not a musical, music plays a big role in the film, which has a much more even, less frenzied pace than parents are likely expecting.

The screenplay by Carley Steiner and Josh Cagan smartly sets up a touching payoff that connects the climax to some exposition introduced early on. It’s an emotionally rewarding moment, with most Disney Channel projects never attempting to elicit tears from the viewer. In the hands of director Manjari Makijany, the narrative never gets boring and while the entire experience feels elevated beyond your typical Disney Channel Original Movie, it’s still kid-friendly enough to have some kids-only funny moments (and a few for parents, mostly provided by Meera Syal).

Spin is sure to inspire a new generation of kids to put turntables and mixers on their wishlists, but the real gift to the world is the film’s diversity and inclusion. Kids will aspire to be like Rhea and the ripple effects of having an Indian American role model at a young age can have significant rewards for the future. And if you’re looking for a way to make your at-home premiere of Spin extra special, consider ordering dinner from your local family-owned Indian restaurant.

I give Spin 4 out of 5 colors thrown at the Holi-inspired Festival of Color.