Outside of his sitcom and romantic comedy roots, in recent years actor Ryan Reynolds has become known for his ability to headline big-budget comic-book adaptations like the Marvel-based Deadpool movies and (probably to a lesser extent) DC’s Green Lantern. But this week fans will get the chance to see the somewhat softer side of Reynolds’ leading-man appeal in the video game-inspired action/comedy Free Guy, out Friday from the Disney-owned 20th Century Studios.

I recently had the opportunity to sit in on a press conference conversation with the cast and creative team behind Free Guy, during which Ryan Reynolds chatted about the origins of his involvement with the film, his working relationships with his fellow cast members, and why he doesn’t like to call this a video game movie. How did Ryan Reynolds first come aboard Free Guy? “Well, I read the script,” he says. “[Director Shawn Levy] and I had met about another [project]. We were close to working together [previously]. I read the script and then I sent it to Shawn, and the next thing I know, Shawn was in my living room in New York. We were talking about this world and how we could build it– how we can make changes that would make it relevant and speak to the world that we're living in now. And it just sort of went from there.” But one of the most appealing things about the idea also turned out to be the trickiest thing about getting it made. “It's hard to make a new movie. It's hard to make something that isn't based on some pre-existing IP, or a comic book, or a sequel in some regard. It's very challenging.”

As far as the development process goes, Reynolds discussed how the screenplay had to stand out over more tried-and-true properties. “You get the script to a place that you feel like it's perfect or it's great. And then you have to kind of make it 30 percent better somehow, because you don't have any ability to rely on a pre-existing knowledge or fan base, so you really have to go out there and prove it the old-fashioned way. That was a challenge that, thank God, Shawn and every single cast member was up for. It was nerve wracking, and it continues to be nerve wracking, even now as we're done and entering the world.”

Reynolds also talked about the sweetly innocent character of Guy, whose demeanor stands in contrast to Wade Wilson in the Deadpool films. “It's just slightly new for me. There's a movie that I love called Being There starring Peter Sellers. That was the first foothold I had into this character and this world. There's something really wonderful about playing a character who's naive and innocent. I mean, it's even said in the movie– in a sense he's kind of like a four-year-old adult. There's something really fun about exploring everything with new eyes, which is what this character gets to do, and sort of filtering that through the prism of comedy, and occasionally cynicism, and all sorts of other things. I love playing a character who is stepping out of the background into [being] this new person.”

What about the inclusion of the mid-90s Mariah Carey song “Fantasy” as such a key recurring touchstone in the film? “In the earliest draft, we'd written in The Outfield’s ‘Your Love,’ and it’s a great song, but it ended up just not fitting right,” says Reynolds, who produced Free Guy (written by screenwriters Matt Lieberman and Zak Penn) in addition to starring in it. But then Mariah Carey's ‘Fantasy’ just came like a lightning bolt and drove like an engine for so much of the movie. It was really fantastic.” 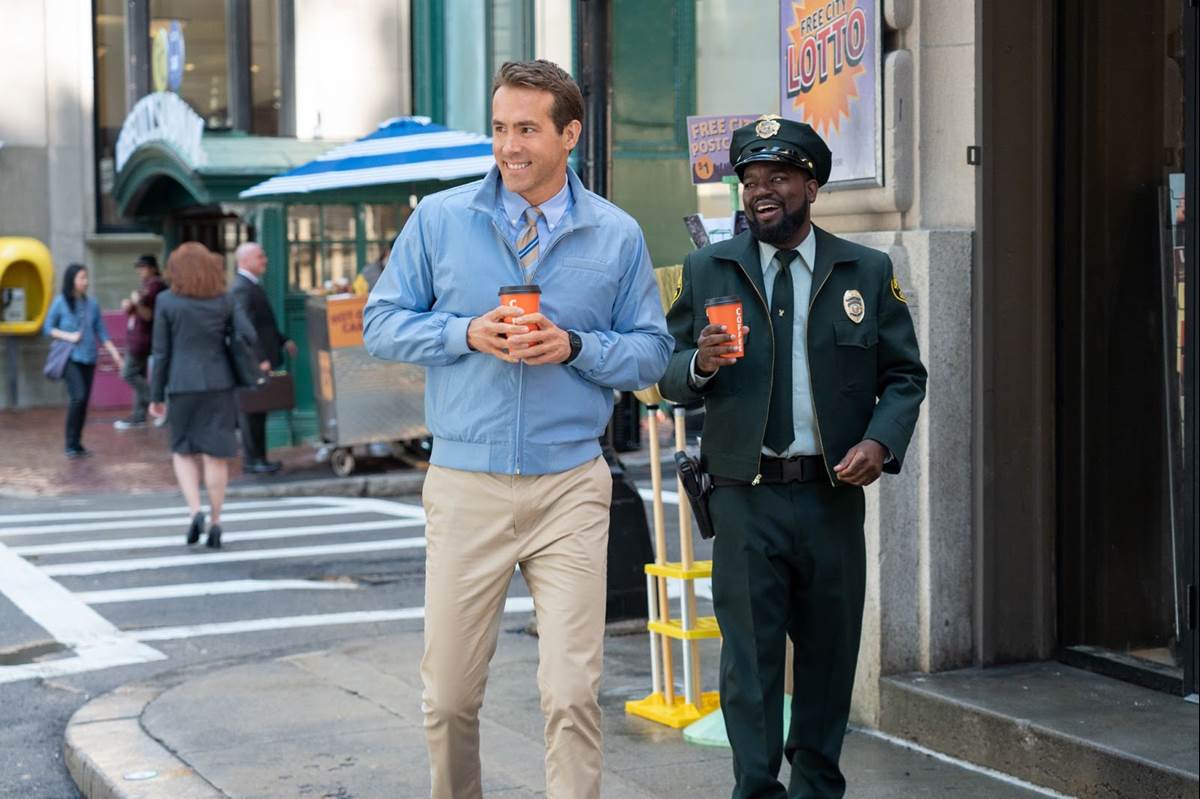 Reynolds also touched on the central friendship in the movie, between the two “NPC” Characters of Guy and Buddy, played by Lil Rey Howery. “I think Rel and I and our respective characters live at this intersection of a little bit on the page, a little bit in the moment. But that's kind of the case for every single person [in this cast]. Everybody here is very adaptive, very good at adding and creating and building and three-dimensionalizing their characters and their work. But yeah, from the moment we met, Rel and I just immediately clicked. I was a huge fan of his and I think we can all say he was a huge fan of… Taika. [laughs] So it was great to get out there and mess around and play, and sort of form that bond and put it up on the big screen.”

When asked if moviegoers would see a continuation of Free Guy at some point in the future, Ryan Reynolds was optimistic, though not 100% committed. “We all hope that we get to do this again, either in the form of a sequel or something else. We're lucky– a couple people [on this team] I’ve [had] the very fortunate opportunity to work with multiple times. Even if it's not in another Free Guy movie, I'm hoping that we all get to [make] another movie [in] another form.”

The conversation wrapped up with a discussion of the cast and creative team’s favorite video games, and which one they’d like to live in if such a thing were possible. “I loved Mike Tyson's Punch Out as a kid,” said Reynolds. “We used to quote [it]. I have three older brothers, so there was just constant messy stabbing deaths all over my house, all the time. We were always sort of at war. But if I had to really pick a game, I would actually kind of like to be in Free City. It's not a real video game, but the video game that we've created, where this film is set, I kind of like the colors and the vibes in there. I know it's a dangerous as hell place to live, but I think I would probably take that.”

“It's interesting to me because everybody's said, ‘Oh, this is a movie based on a video game.’ Or ‘a video game movie.’ I really don't think Free Guy is a video game movie. It's sort of like saying Titanic is a movie about boatsmanship. It's not. It's a movie about so much more. I love the narrow target we had to hit to create a world that felt so authentic to gamers, and [to] then still smuggle this other story into that was a pretty special kind of thing.”

Free Guy will be released into theaters nationwide this Friday, August 13.