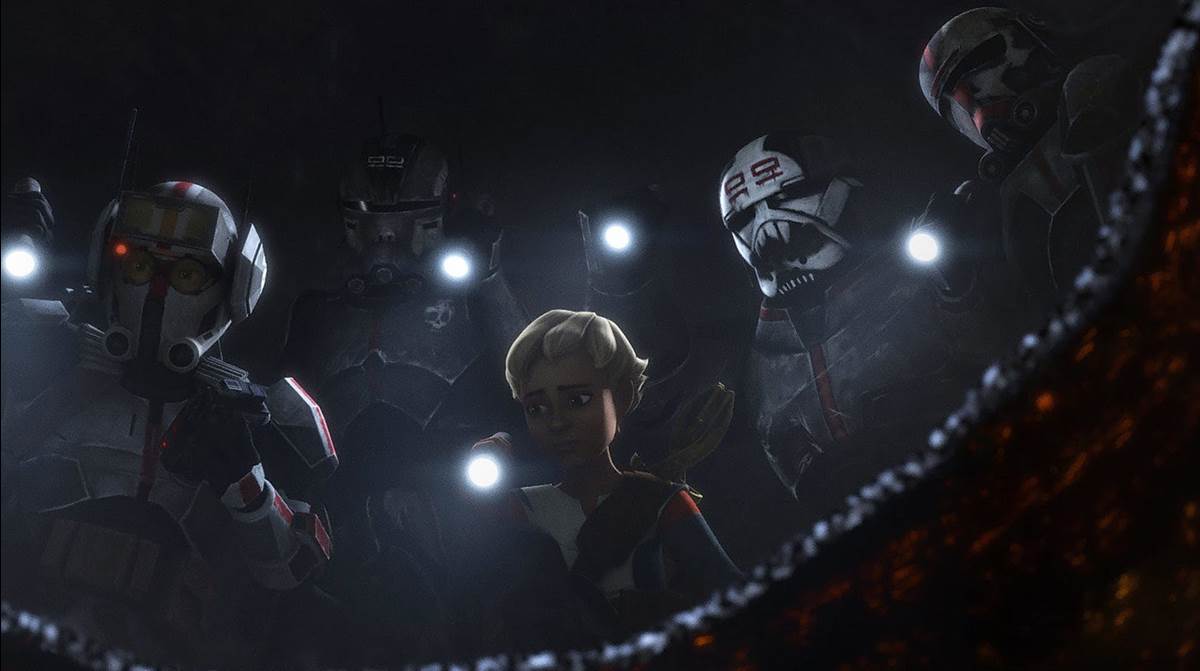 “Kamino Lost” begins where last week’s cliffhanger left off, with Vice Admiral Rampart’s ships bombarding the cloning facility on the planet Kamino, where the Bad Batch are running for their lives in a struggle to survive inside one of the structures. As it collapses, Hunter (voiced by Dee Bradley Baker, as are all the male clones of Jango Fett) gets separated from Omega (Michelle Ang) and a door slides closed between them. On the capital ship, a clone trooper reports to Rampart that all the Kaminoan facilities have collapsed into the sea. Rampart (Noshir Dalal) gives the order to rendezvous with the fleet, and the ships leave the atmosphere. Back inside the destroyed facility, the droid AZI-3 (Ben Diskin) regains its functionality and wakes up Omega who is unconscious next to him. Omega finds Crosshair in a similar state, and calls the rest of the team on her comm.

Omega tells her friends that the room is flooding and Crosshair is stuck under some debris. Tech has trouble opening the door the team members are stuck behind, but Wrecker steps in to do it using brute force. In the other compartment, Crosshair awakes and is surprised to find AZI and Omega trying to help him. Omega uses her crossbow to blast the debris and free Crosshair, while Tech and Wrecker finally successfully open the door, reuniting all of Clone Force 99. Crosshair reluctantly joins their efforts to escape the station, and Omega looks out sadly at the cloning tanks as the facility is flooded. They appear to be too late to break free as the entire structure turns sideways and sinks under the ocean and comes to rest on the sunken floor below. The team scrambles to find a secure space inside the building, with Crosshair begrudgingly tagging along.

The Bad Batch settles into their old barracks, which as Tech points out is ironically one of the most secure parts of the structure remaining. After Wrecker finds the team’s old tally board, Hunter and Crosshair get into an argument about their individual allegiances, and Crosshair says Clone Force 99 is going to die because of Hunter’s “failed leadership.” Omega interrupts to say they aren’t, because they landed on the underwater tunnel, which they could use to return to the building where their ship the Havoc Marauder is parked. AZI cuts a hole through the deck below and they are able to access the tunnel, though they have to walk through and the glass is starting to crack. Wrecker and Crosshair get into an altercation, but Tech steps in to break it up. “Why are you defending me?” asks Crosshair. “Understanding you does not mean that I agree with you,” replies Tech.

As they continue to make their way through the tunnel, they begin to hear the roar of a giant creature in the water outside. AZI says the tube is only protected when the power is operational, so Hunter gives the order to “Run!” as the beast attacks and further cracks appear in the glass. AZI zooms ahead to attempt to restore power to the tunnel by scomp-linking into the computer, but the monster seizes the tube in its jaws. AZI successfully turns the power back on and the creature gets electrocuted by the defense system, causing it to swim away. The power shorts out again, but the Bad Batch find their way to Nala Se’s private lab, where their mutations were originally “manipulated and enhanced.” Tech reveals that Omega is technically older than the other members of the team, because she was present during their creation.

On their way to the Marauder, they find that the next tunnel has collapsed, trapping them once again. AZI’s power cells begin depleting, and Echo reports that the oxygen levels inside the station are dropping as well. “This is what happens when you let a kid call the shots,” observes Crosshair. “That kid saved your life,” rebukes Hunter. These two argue again about the Empire’s deeds and intentions in destroying the city. “Kamino, regs, the Republic… that time is over,” says Crosshair. “The Empire will control the entire galaxy, and I am going to be a part of it.” “All you’ll ever be to them is a number,” concludes Hunter. When Crosshair sulks away to pout in a corner, Omega approaches and tries to empathize with him about not liking Kamino. She says she wanted to blame the inhibitor chip for his behavior, but she was wrong.

Echo finds enclosed glass medical chambers that he says could be their way out of the sunken facility, and Tech agrees. Crosshair pipes up to say AZI should be able to help guide them to the surface and avoid any debris in the water on the way up. AZI says their safety is his primary objective, though the task may be dangerous for him. They put this plan into motion, setting explosive charges to blow the glass between them and the ocean outside. AZI says his power is about to run up, so everyone seals themselves in the pods (all doubling up except for Omega and Wrecker) and Omega blows the charges. AZI guides the chambers past the falling debris as they rise to the surface, until one crossbeam crashes into Omega’s pod and begins dragging it back down toward the ocean floor. AZI swims back down to retrieve her, but his power begins to fail as he burns through the wreckage.

On the surface, the other pods emerge from the water, and Hunter calls Omega on the comm. Omega watches AZI power down and sink below after he has rescued her: “I have completed my objective” are his last words before his eyes go dark. At the last second, Omega tells Hunter that she’s going after AZI, opening the chamber door and swimming back down. She grabs the droid by the arm but he’s too heavy for her. Above, we see Crosshair aim his sniper rifle and for a second it looks like he might shoot Hunter, but instead he fires a grappling hook that latches onto AZI and lifts both the droid and Omega up to the surface. After everyone is safe, Tech says he has a visual on the Marauder, so they all start paddling toward it. The ship sits on the one platform that happened to not be destroyed by the Empire’s bombardment, and the team climbs a ladder up from the ocean to reach it.

Omega looks out over the remains of the destroyed cloning facility (or lack thereof) and wistfully observes that “it’s all gone.” Crosshair they should leave before any scouts show up, but when Wrecker asks if he’s coming with them, he replies, “None of this changes anything.” “You offered us a chance, Crosshair. This is yours,” says Hunter. “I made my decision,” replies Crosshair. Omega thanks Crosshair for saving AZI (and herself) and Crosshair says to “consider us even.” “You’re still their brother, Crosshair. You’re my brother, too.” Crosshair stays on the platform as the Havoc Marauder takes off and leaves Kamino. On another planet, clone troopers deliver Nala Se to a new cloning facility, where she meets a female medical officer (Helen Sadler of The LEGO Star Wars Holiday Special). “The Empire has big things planned for you,” the scientist says to Nala Se, leading her inside. 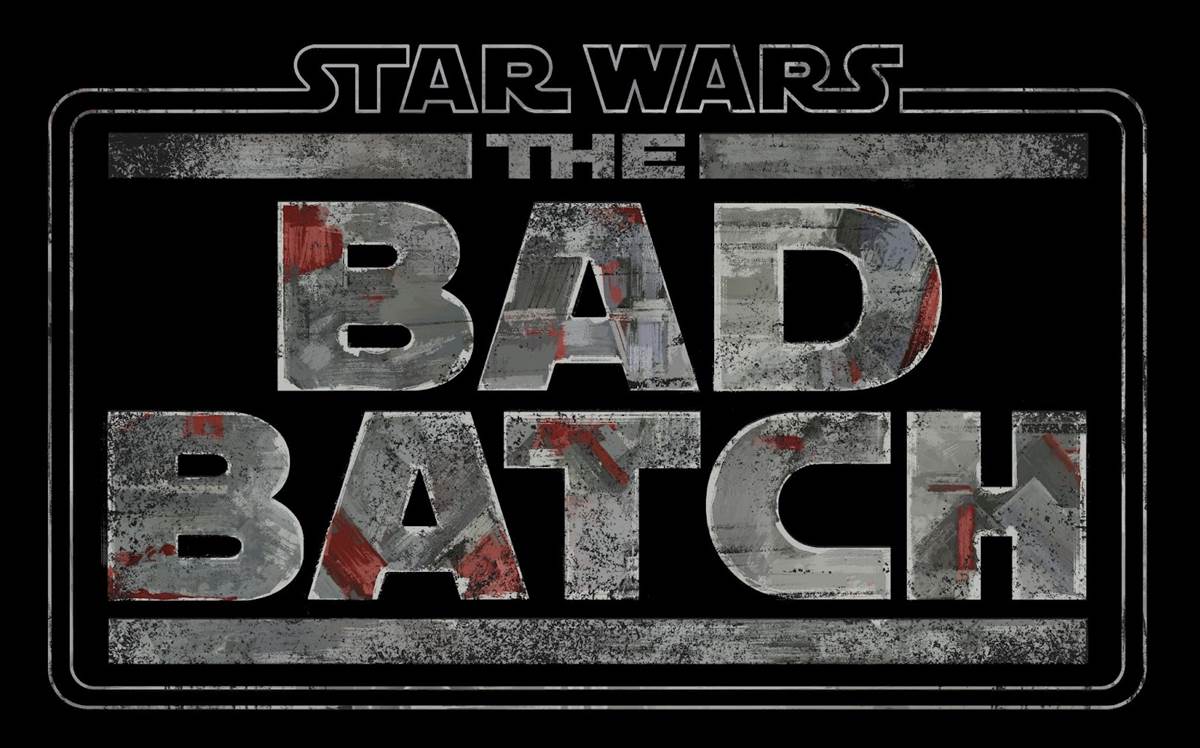 Star Wars: The Bad Batch will return for a second season in 2022, exclusively on Disney+.