Editor’s Note: Below is a first-hand account from the Disney Dream’s first U.S. cruise in more than a year, setting sail on August 9th. Please keep in mind, with this being the first reopening cruise, the experiences mentioned may change as Disney is constantly evaluating and evolving their policies. For more from the Disney Cruise Lines return, be sure to check out our other articles.

As you might expect, some of the biggest changes in how things work on board the Disney Cruise Line Disney Dream are in the realm of dining. In an effort to create physical distance and minimize multiple guests handling the same items, several changes have been made.

All three main dining rooms still have early and late seating. But even within those broad slots, not everyone has the same time assigned to them. For example, our late dining time was 8:05 p.m. while others were a little earlier or a little later. While this time isn’t enforced, the idea is to stagger the arrival of guests rather than have a lineup for entry. In fact, our server told us this method has been tested in the past even prior to COVID. Every time we arrived at dinner around our assigned time, we were able to immediately enter the restaurant with no wait whatsoever. 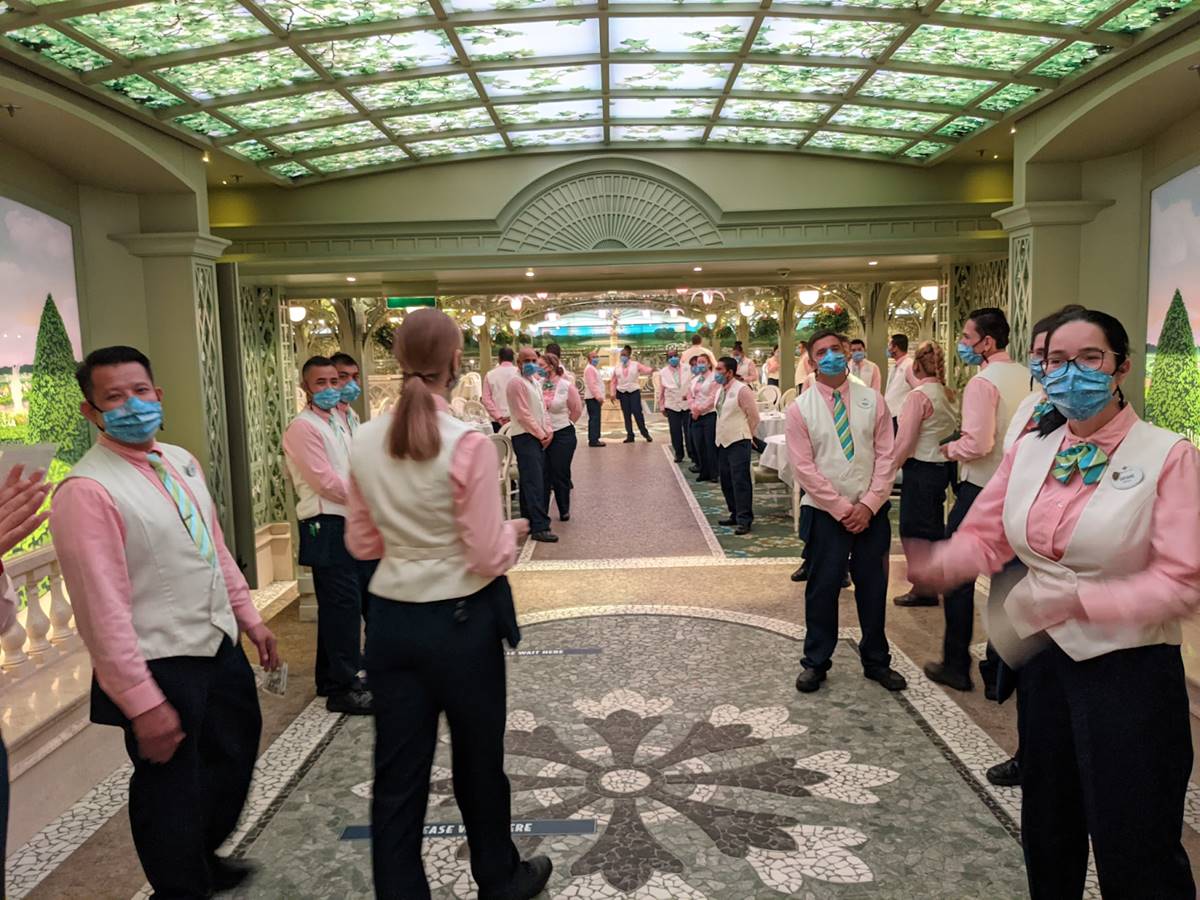 Entering Enchanted Garden all by myself

Like it or hate it, right now you won’t be experiencing it – tables were not shared among multiple traveling parties. Our party of three had our own table, which was rarely the case in the past. Tables were clearly arranged and seated to provide social distancing between them, so we were never within a few feet of our neighbors. A plexiglass divider has been added here to increase separation. Enchanted Garden was the only dining location with this addition.

Paper menus are not provided. Instead a QR code is on the table. I had trouble scanning the code for some reason, but luckily the menu is easily navigable on the app without the code. We did miss the ability to just scan an entire menu at once, but we understand. And I did some one paper menu left out on a table, so I’m sure they’re available if you request. Beverages (at least water) are typically waiting for you when you sit at the table, so in general, I saw guests remove their masks when they sat down and kept them off unless they got up from the table. Servers, of course, had their masks on at all times.

Some of the guest/server interactions we’ve come to love are not happening right now. No giving the kid’s ketchup by making a Mickey on their plate. And the number of magic tricks they’re able to do has been pared down considerably. Even with these changes, we did not find their hospitality or their attentiveness were hampered by the masks or policies.

For entertainment, the Royal Palace had the princesses near the entrance so we could say hello as we entered. There was also a piano player in the center of the room which was wonderful. Animator’s Palate had Turtle Talk with Crush. And the Enchanted Garden had the Fab Five come in part way through dinner and sign and dance while making their way around the restaurant (but not stopping at any tables). It was a very cute little show. On Pirate Night (which for us was at Animator’s Palate), our meal was interrupted by singing and dancing pirates that circled around and encouraged us to wave our napkins and put on our pirate bandanas (without leaving our table and with reminders that the bandana is not intended to be used as a face covering). The Pianist in Royal Table The character show in Enchanted Garden Cabanas was consistently open for breakfast and lunch as usual. However, it was not a serve-yourself. Each station had Cast Members that would take a plate and put items on it based on your requests then give it to you. In our experience, more stations were open than I’m used to seeing given the time of day, so that makes physical distancing easier. However, food items were repeated, so I felt there was less variety for both breakfast and lunch. All entrances to Cabanas have large hand-washing stations now in addition to the hand sanitizer we’ve seen in the past. Guests are requested to wash their hands before entering. If you’re familiar with Cabanas, you know the aft elevators let you off in the restaurant and you have to walk through to exit to the top deck. In our experience, if you let them know you were passing through, they were fine with you not washing your hands. Large circles are present throughout the food area to encourage distancing, but there was no one forcing guests to stand there. Still, I think just the suggestion encouraged guests to naturally spread out.

The tables inside and out had some with signs on them asking guests to not sit there for distancing. But chairs were always there and could be borrowed for another table. Again, for the most part I saw guests observing these requests. Face coverings are required inside until you sit down at your table and eat. They are not required in outdoor eating spaces.

The Cabanas drink stations are normally self-serve, but now are staffed with a Cast Member getting your drink and putting it on a table that you can then take it from. We also had Cast Members sometimes meet us at our table and get our drinks for us. Condiments (ketchup, etc) are also given to you by Cast Members rather than self-serve. Napkins and silverware are brought to your table instead of already sitting on each table as they used to be.

Flo’s Cafe (pizza, burger, sandwiches) has added an explicit entrance queue rather than the random walk-up of the past. When entering, you are requested to wear a face covering and sanitize your hands. You can then go from station to station having your food served as it always has been. The treats at the ice cream station are now served to you. I made a point of looking at it every time I passed and I only saw a line (albeit a short one) one time. It seemed to be regularly manned by two Cast Members. The outdoor drink station near Cabanas was also manned and also rarely had any wait at all. While they would not refill your own bottle, they were happy to give you multiple cups that you could then pour in yourself. The Cove Cafe was the only lounge that had a separate entrance and exit. Pink, Skyliner and 687 all allowed entry and exit through any door even though they have multiple doors. The Cove Cafe also had markings on the ground for queueing. Evolution in the adult area All locations had some tables with the “please don’t sit here” signs to encourage distancing. Outdoor seating near the Cove Cafe had the signs as well asking guests not to use some of the giant comfy chairs and tables. 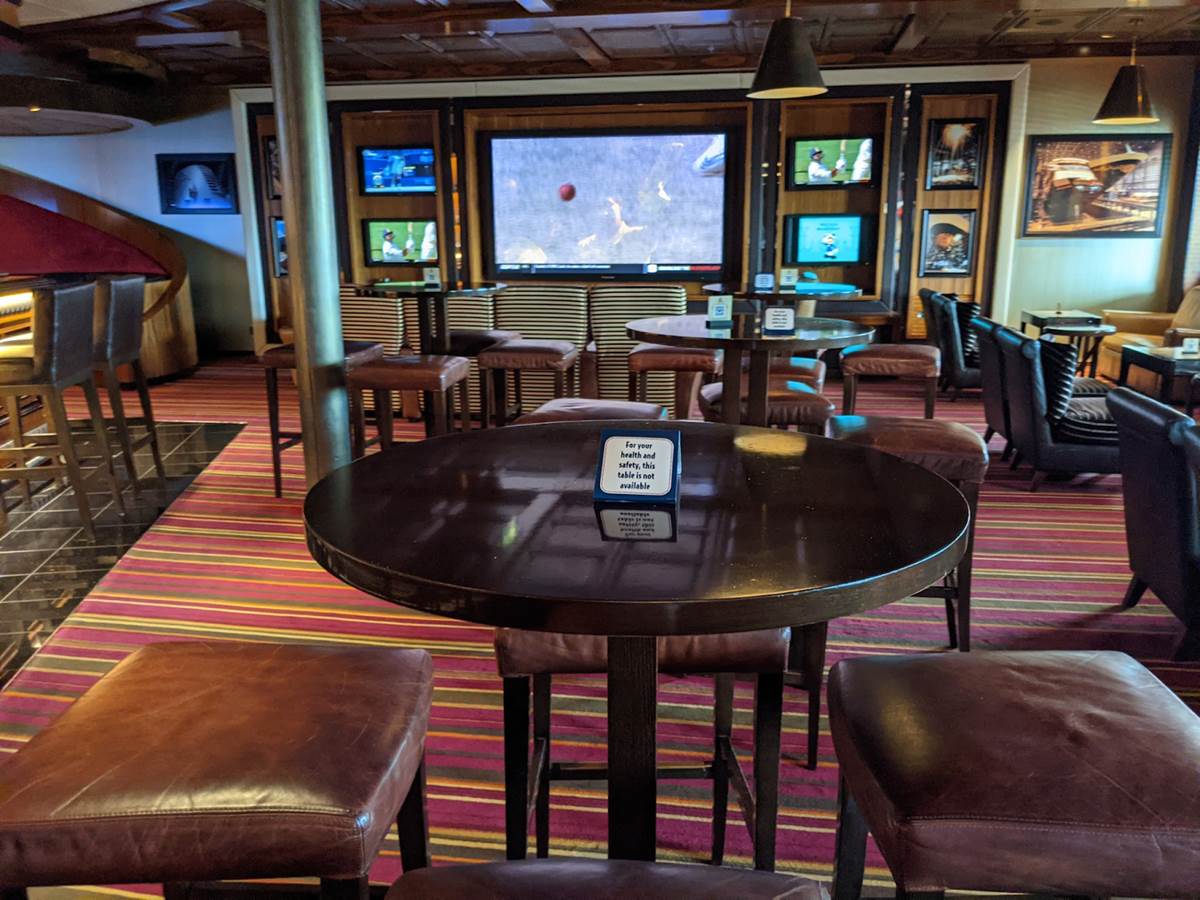 In general, I saw guests unmasked while seated inside lounges nursing their drinks and snacks.

The snacks in the Cove Cafe are not self service but the barista is more than happy to get you whatever you need (and reminder – these pastries are included in your cruise fare). 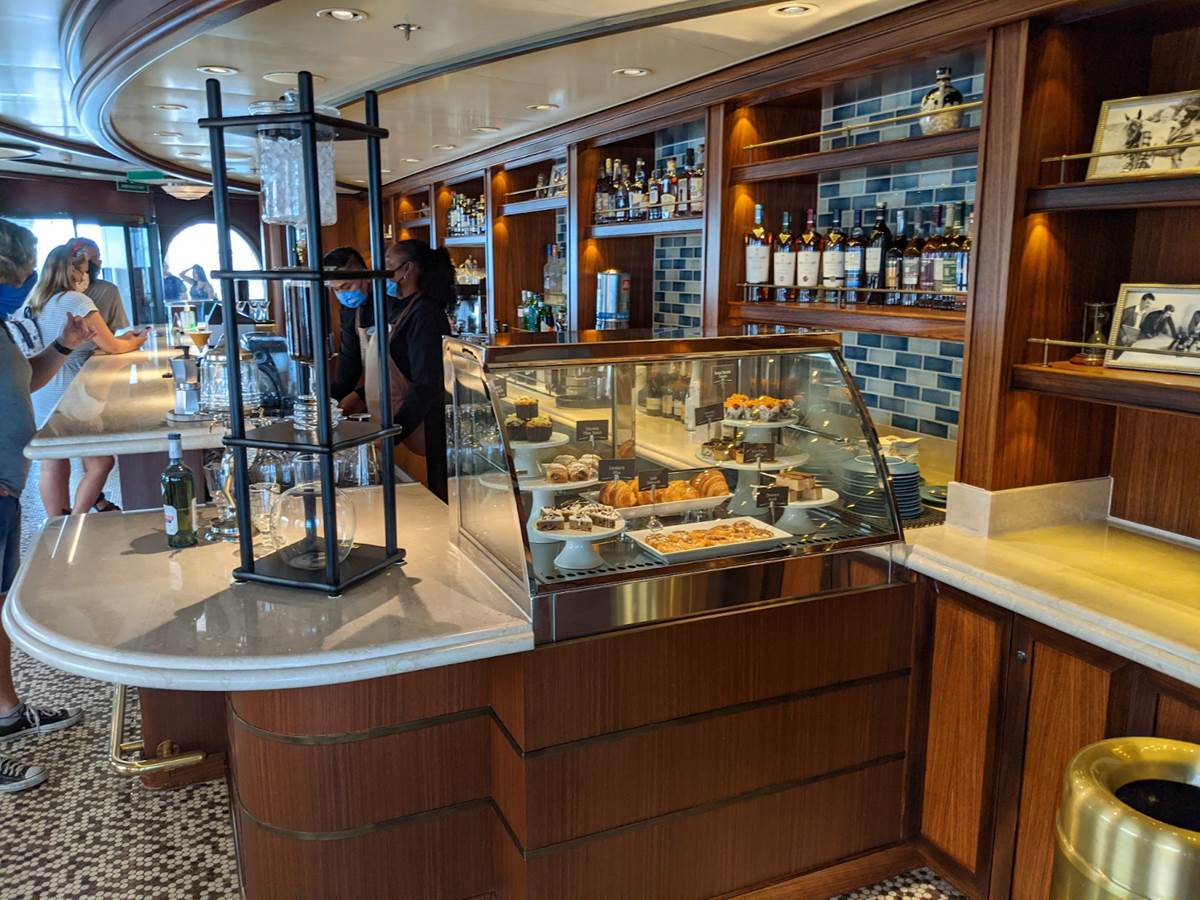 The Cove Cafe did not have their normal assortment of magazines to take and read while you enjoy your drink.

The server will ask for your room number and last name to keep your tab. Once you’re done, you can just leave and they’ll close it out. It will automatically show up on the app and give you the opportunity to add an additional gratuity if you wish. Note: The window to add a gratuity does expire, so don’t put it off for too long.

When there was entertainment in a lounge, it was always first-come and it was possible to run out of space. We noticed this regularly at the District Lounge in the adult area (which has very little seating) and also occasionally at Evolution in the adult area. 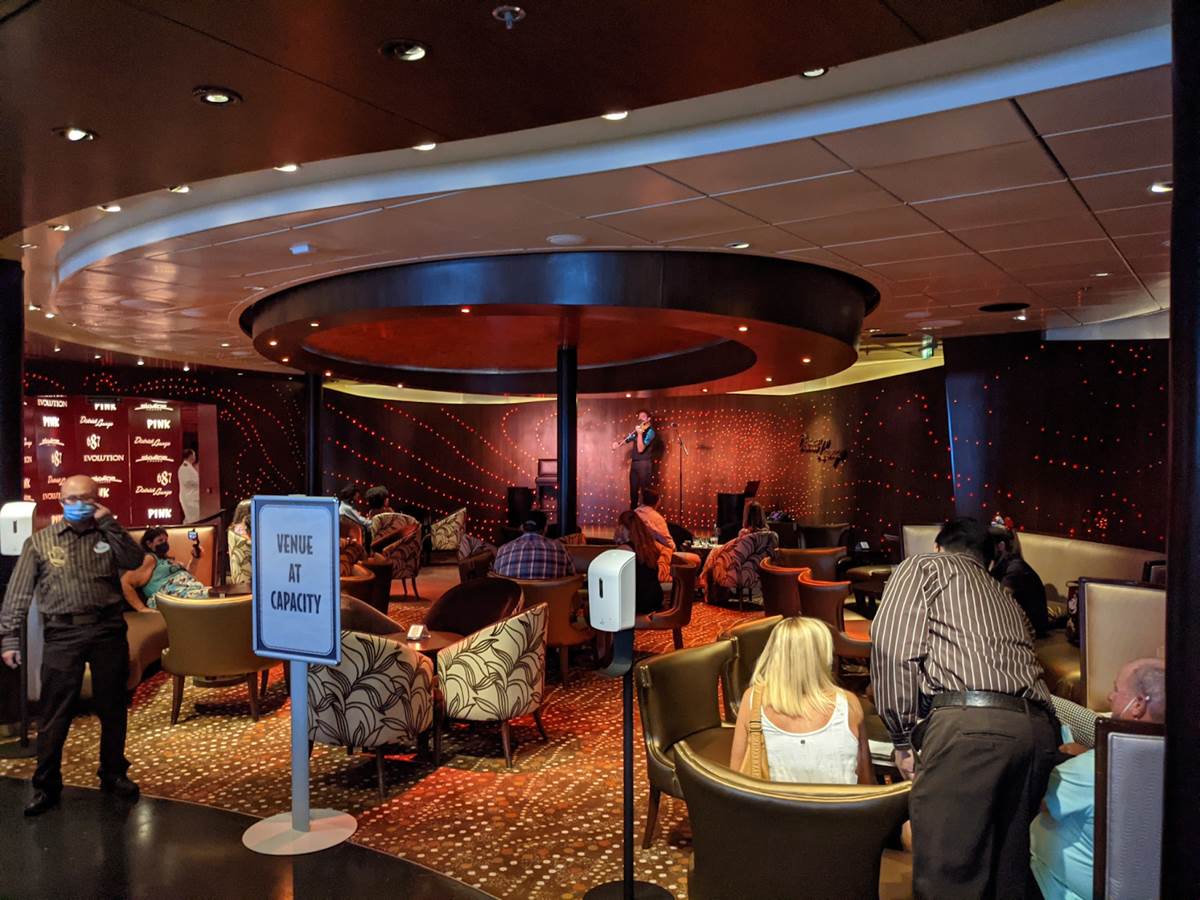 The D Lounge at capacity as the violinist played film score

One of my favorite things about cruising is Room Service. No where else can I get food delivered to my room and it be included in the cost. And while they’re still not on the menu, Mickey Premium Ice Cream Bars are still available.  We ordered room service several times on this cruise (still done via telephone, not the app) and the only difference I noticed was the delivery person is not permitted to bring the tray into your room. Also, the app did not show any breakfast items. However, I’m not sure if they were available for the asking. Instead he hands it to you at the door. Again, it will show up on the app if you wish to add any gratuity. 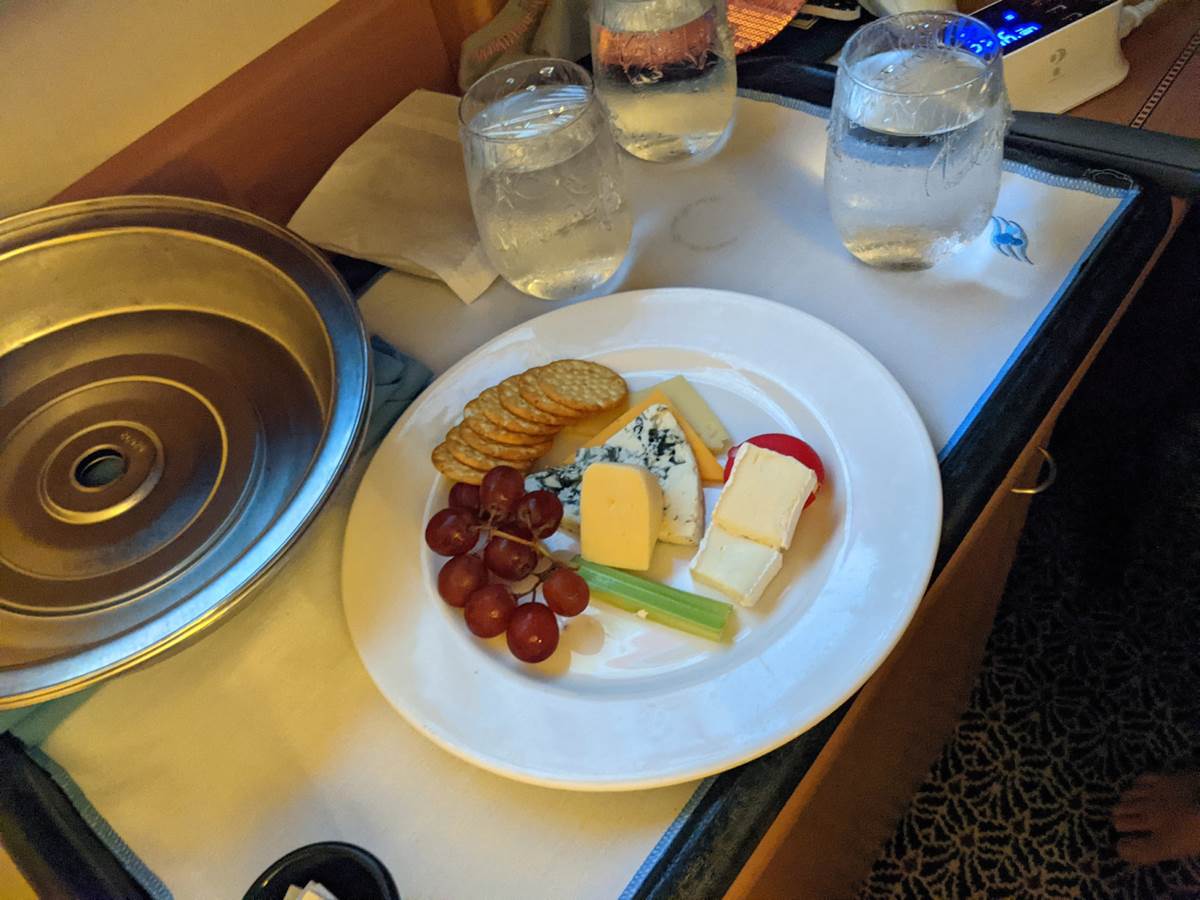 The "All Hands on Deck", my favorite room service order

Cast Members still roam the pool deck taking drink orders though it felt like there were fewer than in the past. We did not see them ever carry drinks for immediate purchase. But they did take orders and quickly returned with your drink. They took your room number and last name and the order appeared on the app in case you wanted to add an additional gratuity.

We did not see any of the finger food stations in the lounges or elsewhere on the ship available, presumably because they are self service. However, in the lounges, each table was given a trio of dishes with salty munchies.

Stay tuned for more from our experience upon the Disney Dream’s return.