Game Review: “The Rocketeer: Fate of the Future” from Funko Games

Strap on your jetpack and helmet and don’t forget your chewing gum as you become the Rocketeer (“The Rocka-who?”). Funko Games invites you to travel back in time to the golden age of Hollywood in The Rocketeer: Fate of the Future, a new two-player game inspired by the 1991 live-action Disney film. Players end up on opposite sides of the battle between Cliff Secord (aka The Rocketeer) and Neville Sinclair in this exciting tabletop game. Six locations from the film make up your game board and a “Tussle” can occur at any of them, as long as a hero and a villain are on opposite sides of a location. The Luxembourg is on its North American Goodwill Tour and as it moves closer to Los Angeles, time is running out. Ultimately, the goal of the game is to have more points at the end, which are earned by a variety of actions, including having the plans to the top secret jetpack. 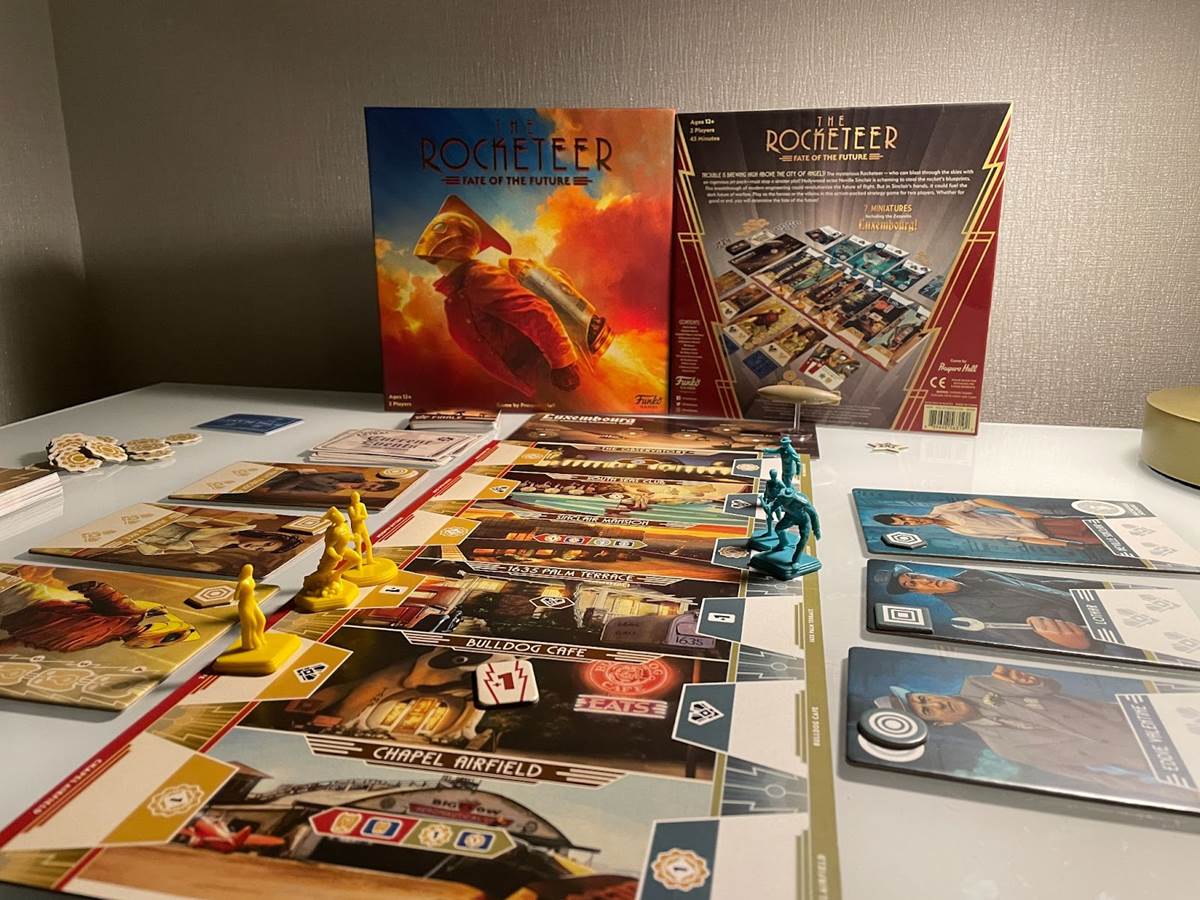 Three blueprint cards start on the side of the heroes, but can switch sides to that of the villains during a tussle. They are placed face down, with two decoys, only moving to the opposite side when the true plans are won. Can you imagine what would happen if Neville Sinclair actually got them? The sequence of the events you know and love from the film can change in this game, including the ending. 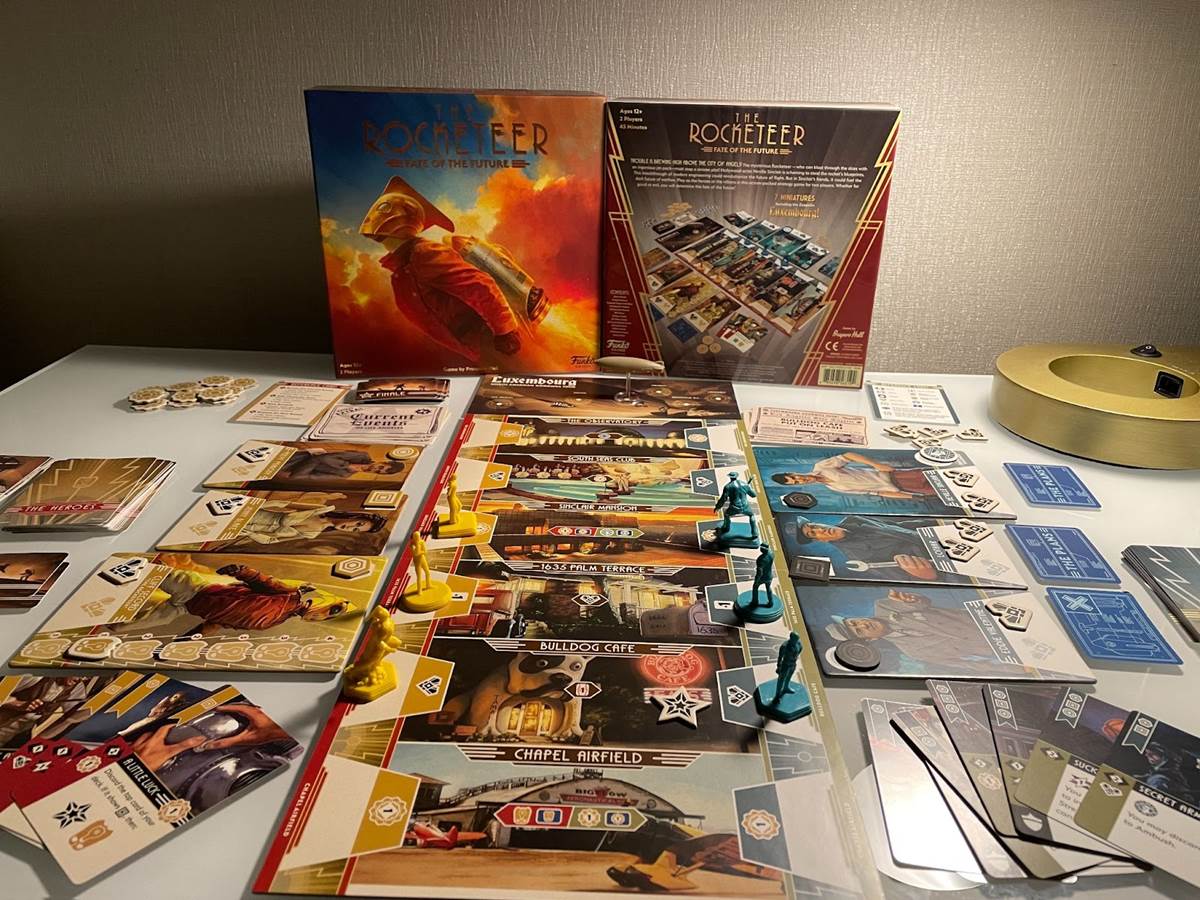 With three characters on each side (Heroes: Cliff, Jenny and Peevy / Villains: Sinclair, Lothar and Valentine), players alternate turns until each character has made a move, using a deck of cards unique to their side of the board. Each player can have up to 7 at a time in their hand (possibly more depending on bonus options) and symbols match which characters can use each. Flippable markers help keep track of which characters have already had their turn progressing towards the end of the day. Some cards have a cost in the form of “Clout Tokens,” which are easily earned while navigating through the locations. Once all three characters have played through a turn, a new “Current Events” card is drawn, which looks like a newspaper headline. Each card can move the Luxembourg closer to Los Angeles, comes with a new scenario that applies to all players, and adds an incentive for taking control of a location at the end of the new day in the form of a bonus card in play from that player’s deck. What sets the heroes apart from the villains? Both Cliff and Sinclair have unique abilities that make playing on either side fun and exciting. For Cliff, players can increase his jetpack fuel, which allows him to move faster through locations on each turn. But for Sinclair, he can recruit soldiers who become new obstacles for the heroes and make it easier for the Villains to take control. Solid-colored figures of all six characters feature nice sculpts that match the poses of each character's cards. The Heroes take on a golden yellow, tying into the color of Cliff’s helmet and jetpack. The villains are a suave shade of blue, presenting as cool, calm and collected while still being tough. 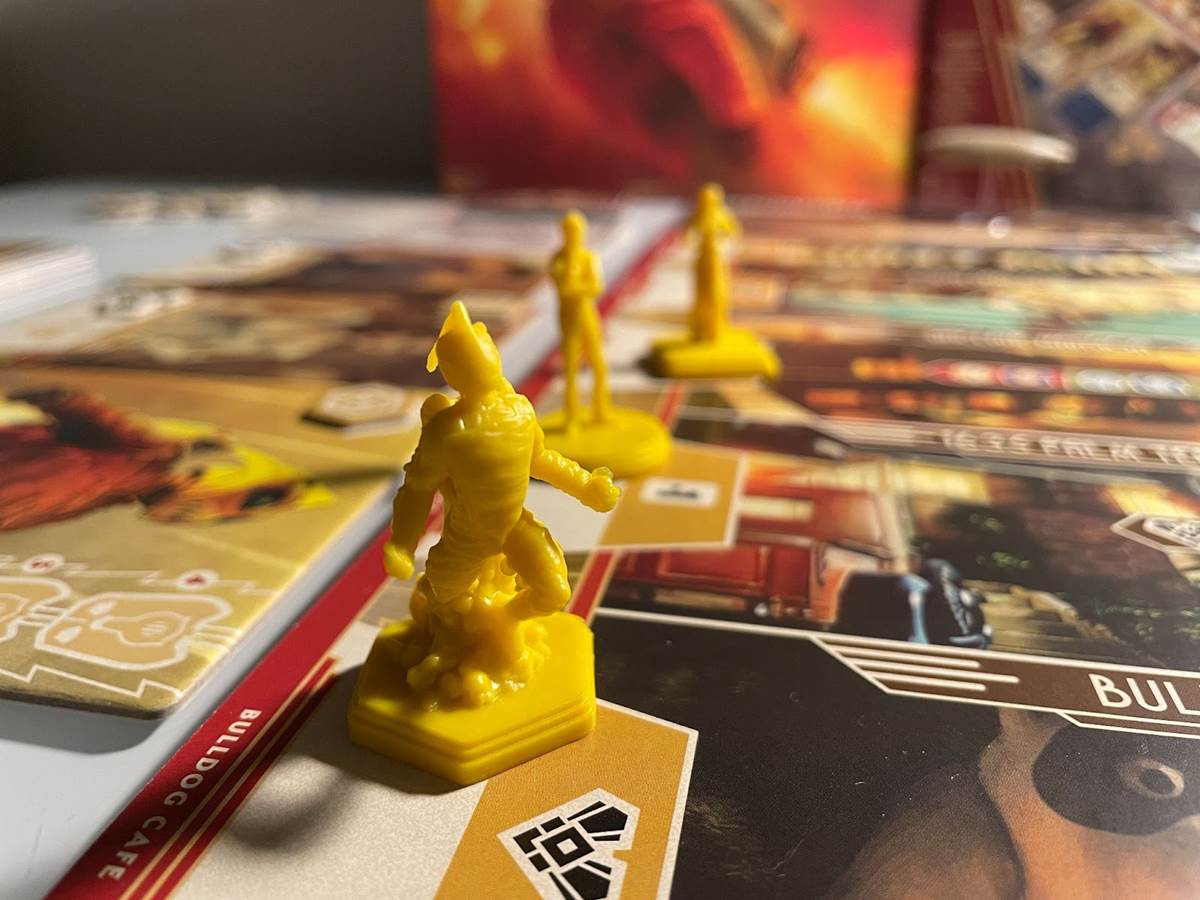 Another nice touch is the dirigible, which sits atop a clear base to give the illusion of levitation. 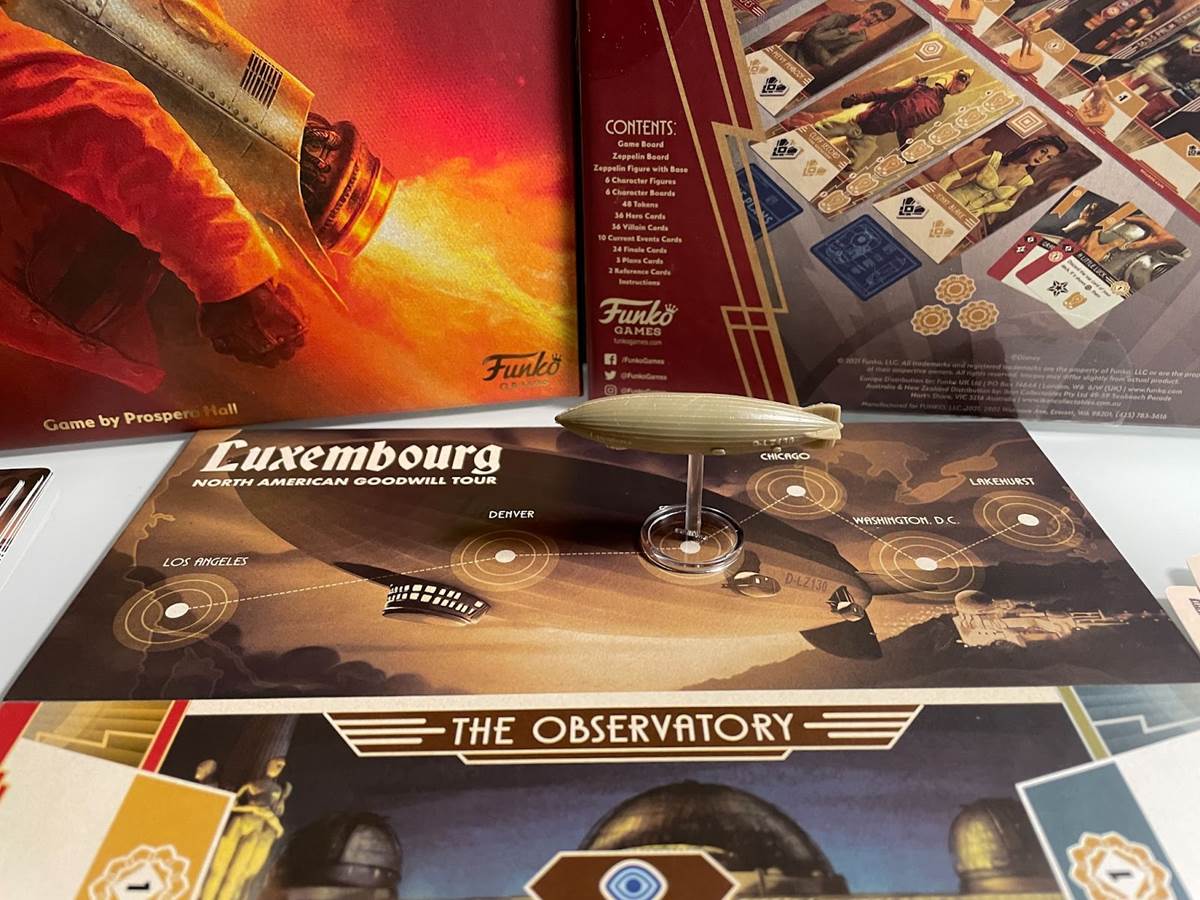 Designed by Prospero Hall for Funko Games, the grandeur of the 1930’s is everywhere, starting with the handsome packaging, which features gold foil accents. It’s a marvelous art deco world when you’re playing through this luxurious story. The board itself also captures the California Crazy whimsy of the Bulldog Cafe and the swanky atmosphere of the South Seas Club. Whether reliving fond memories of the classic film or just looking for a fun game that’s perfect for two players, The Rocketeer: Fate of the Future will land on store shelves later this fall. Fans looking to get an early copy will find it debuting at Gen Con in Indianapolis from September 16th through 19th. The game is recommended for ages 12 and up with a suggested retail price of $24.99. 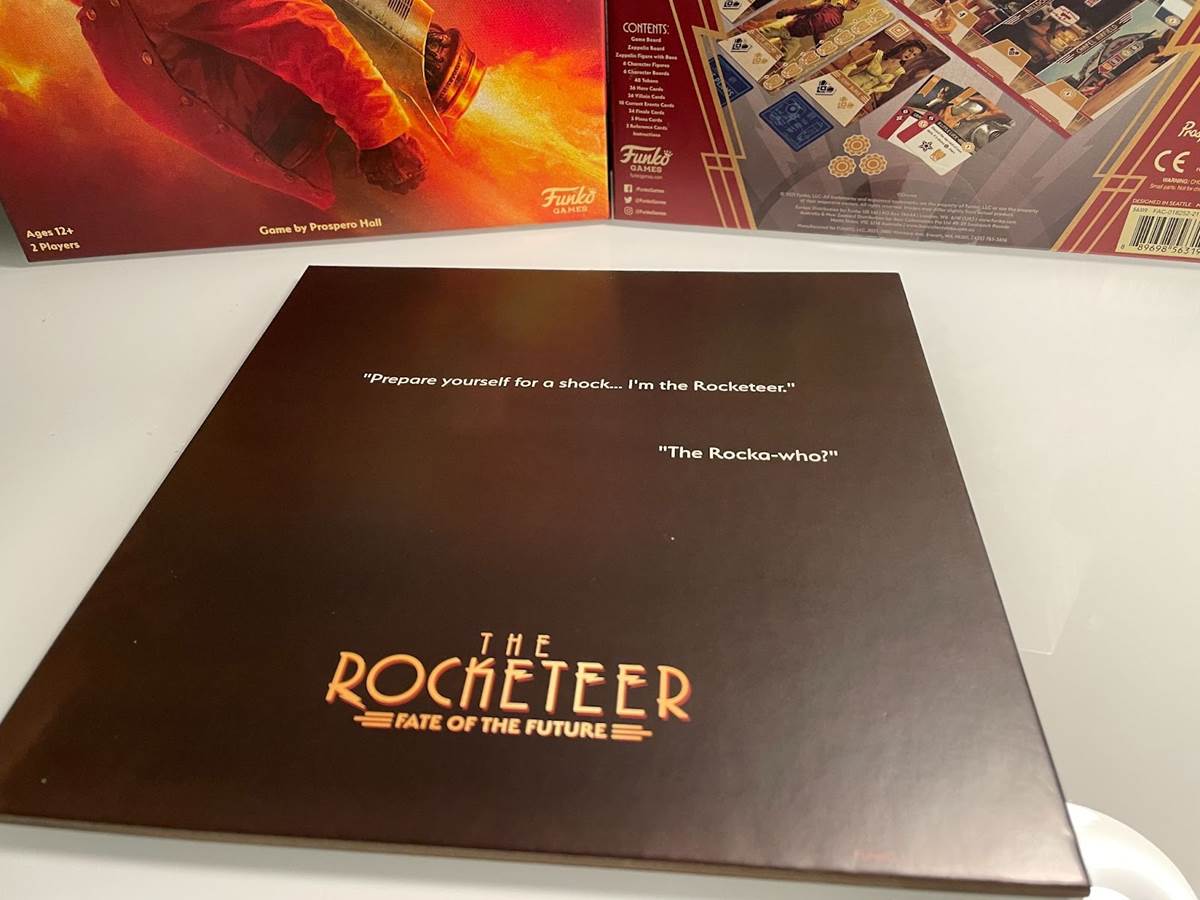