The new drama series Nine Perfect Strangers, starring Nicole Kidman and Melissa McCarthy has dropped their first three episodes on Hulu, and here is a recap of what you can expect from the initial three hours of the eight-episode series based on the Liane Moriarty book. 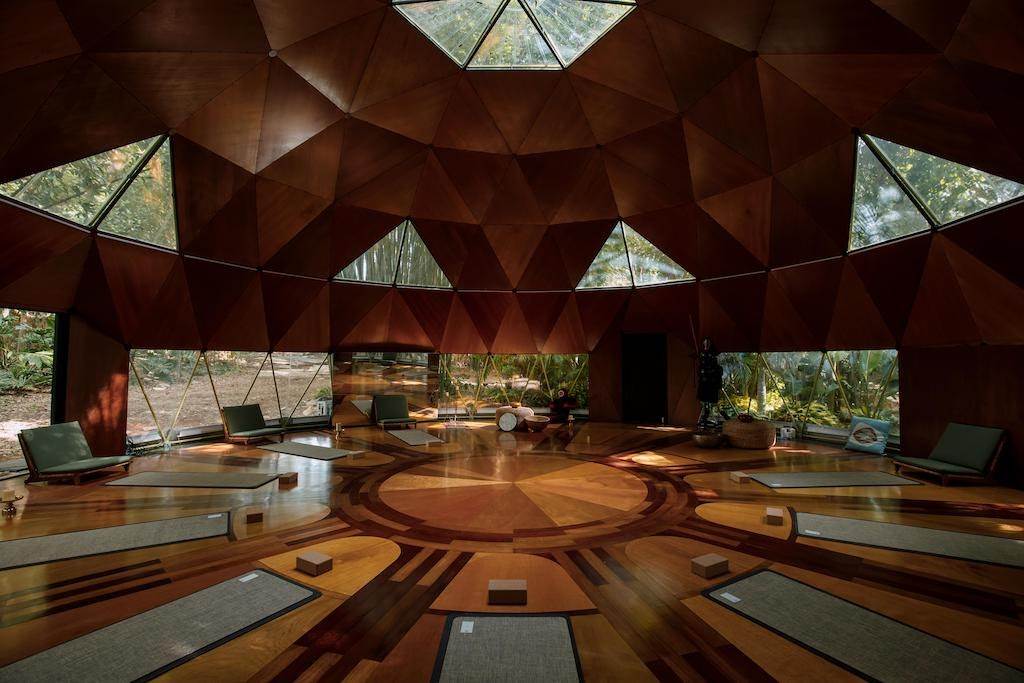 Nine strangers are making the journey to Tranquillum House in the hopes of gaining health and happiness. The Marconi family including Napoleon, Heather, and Zoe, (Michael Shannon, Asher Keddie, and Grace Van Patten) spend the car ride to the facility reflecting on how lucky they were to be picked to attend this exclusive resort.

Francis (Melissa McCarthy), a single writer, drives alone thinking back on her disastrous personal life. Despondent over the failure of her latest book, Francis meets Tony (Bobby Cannavale) on the road. Though they are both travelling to Tranquillum neither is cordial during this initial meeting.

Lars (Luke Evans) is also on his way to Tranquillum. While picking up supplies he meets Carmel (Regina Hall). She tries to strike up a conversation about their destination, but Lars ignores her and leaves.

At the lodge, the guests arrive with a flourish. Ben and Jessica (Melvin Gregg and Samara Weaving) drive up in their fancy car, blocking Tony. Everyone checks in and starts to learn about the rules of the resort. They meet with Yao and Delilah (Manny Jacinto and Tiffany Boone) who gives them the lay of the land at Tranquillum. Carmel tries to socialize with Francis but spoils the moment by constantly talking about her kids. Francis rebuffs this attempt and friendship and wanders off on her own. Doubting her desire to stay, Francis meets Masha (Nicole Kidman). Though she heard a lot of stories about the enigmatic leader of the wellness retreat, Masha is a breath of fresh air for the saddened Francis.

Slowly we start to see how much the nine strangers suffer. The Marconi’s lost Zoe’s twin brother Zach to suicide three years ago. Lars is trying to connect with his ex-boyfriend but is rejected, Carmel is unravelling over missing her kids, and Tony has a serious addiction to pain killers. Ben and Jessica are not the happily married couple that they pretend to be.

When orientation starts, the nine strangers are brought together as one, where they meet and get to know one another, Francis describes what it’s like meeting Masha. When Masha joins the group, she talks extensively about how they will all change. Telling her story of tragedy doesn’t convince Lars about Masha’s sincerity.

Her forward approach of bringing up Zach’s suicide is upsetting to Zoe which causes her to leave. This brings out the protective mother in Heather who questions Masha about her approach, Masha’s response about what she intends to do with the group will shock the characters and the television audience alike. 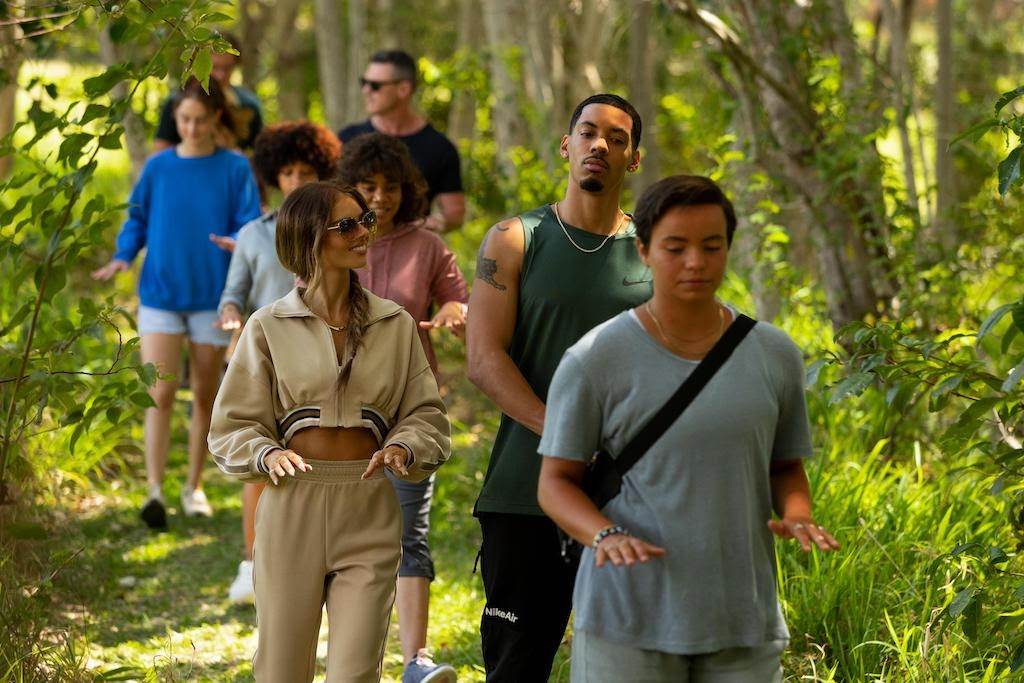 Zoe has fled the orientation upset. Though she gains some comfort from talking with Francis about her brother’s suicide, Heather interrupts and brings her daughter back to their room. Back at the main house, orientation is deteriorating.

Tony confronts Masha about having his room and bags searched. Taking the cantankerous Tony aside Masha offers to give him back his pain meds and the alcohol that they took out of his bag. Francis has returned to orientation where she talks with Jessica. Though Jessica is a big fan of Francis’ books, the author shrugs off the praise and describes herself as a hustler of the heart.

The guests return to their room for the evening. Alone, Masha receives a threatening text. Could one of the new guests be a danger to her?

The next day everyone shows up for their communal breakfast. The mood is tense but is diffused when Yao brings the group out to their first task for the day to dig a ditch. The group is asked to lay in their ditches and close their eyes. While they are guided in a meditation Yao and Delilah throw dirt on each person. The ceremony is meant to signify a rebirth of each person.

Masha begins to meet with each person one on one. She talks with Jessica and starts to probe the details of her marriage to Ben. We learn that Jessica wants to fix what’s broken, and that she is very insecure about her relationship with Ben. 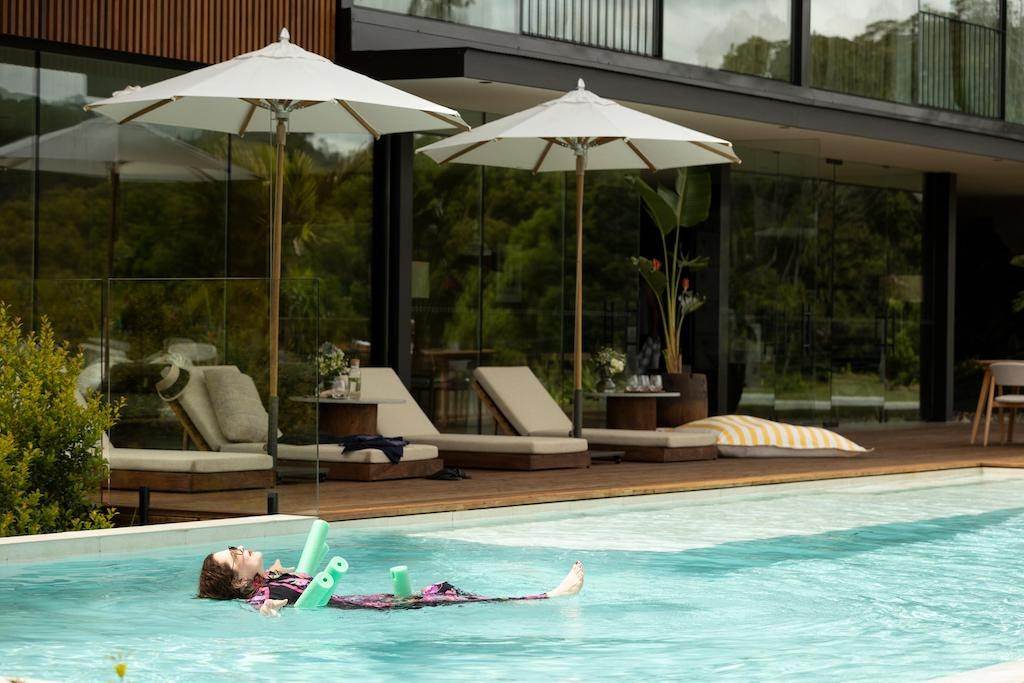 Francis is relaxing in the pool when Tony arrives and spoils her solitude. They are less than cordial, and after cannonballing into the pool, Francis has tried to steer clear of Tony and his antics. Asleep on her pool float, Tony throws a grape at Francis in frustration, only to lodge in her throat requiring Tony to save her.

At another planned event, we watch as Heather leaves the group and makes her way to the cliffside. Worried that she might jump, Napoleon and Zoe race to her side, only to be stopped by Delilah. Standing next to the fragile Heather, Delilah holds her hand until Heather decides to walk back from the edge.

Meeting with Francis again, Masha sees a desperate woman who is looking to avoid confronting her painful past. We know that Francis was catfished by an online boyfriend. Combined with the failure of her most recent book, Francis wants out. The regal Masha convinces Francis to stay for another day, and if she wants to leave in the morning, then she will be free to go.

To Masha, Francis’ tank is empty. However, she assures the novelist that within a few days her resilience and strength will come back, and she will be ready to face the world.

Tony is desperate for solitude and makes his way back to the ditches they dug earlier where he lays down to meditate. Zoe confronts her father and says that nothing is wrong with her, but rather he and Heather have the real problems.

Lastly, Masha meets with Yao and Delilah to tell them that they are going to start the protocol for the guests earlier than expected. Nerves are frayed as the third episode begins. A sweet moment between Napoleon and Heather is offset by the doubt that Delilah has about beginning the protocol for the guests. Trying to convince Masha that this is a bad idea, she is rebuffed by her leader and the days treatment program begins. The guests learns that today is a day for foraging.

Breakfast is less than successful for a few guests. Tony is having flashbacks to his football days, and Carmel snaps on Lars and attacks him at the table. On the brighter side, the hostility between Francis and Tony is lessening. She recently shared with him that she was scammed by an online boyfriend and asks him to keep her secret from others. He assures her that the secret is safe with him.

The first activity is a potato sack race between the group. While Napoleon is confident of victory, Jessica proves adept at using her cartwheeling skills to snatch victory from the Marconi’s team.

Today is Napoleon’s turn to meet with Masha. The ever-confident high school teacher is excited to meet privately with the guru but confronts some painful moments from the family’s recent trauma. He informs Masha that Heather is broken over the suicide of their son Zach. Led in a meditation by Masha, Napoleon sees his son but refuses to acknowledge his vision to Masha.

Tony’s football fame is unmasked by Ben which causes the aged athlete to become distraught and distant from the group. Tony doesn’t want to talk about his past. The afternoon is filled with opposites and the men and women are split up based on gender for two very different hikes. Told that they could forage anything from the land, the men learn that very little is available to eat. 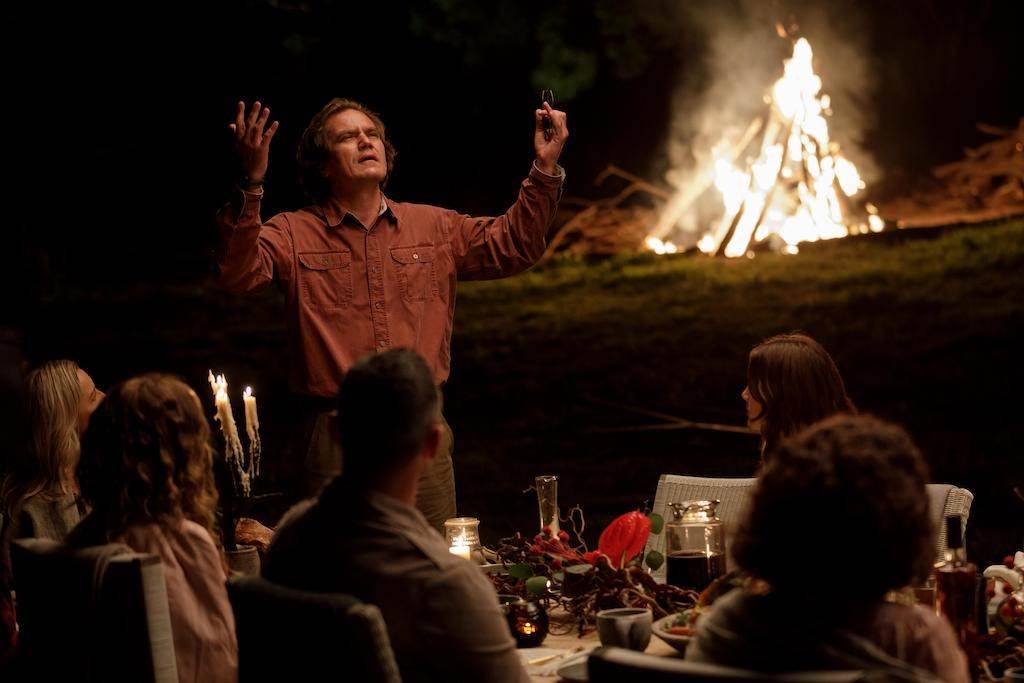 While the women connect with each other and share more about their personal pain, the men are struggling to survive the day without eating lunch. Heather shares her love for Napoleon in the hot spring, and the men resort to their primordial urges. As they come across a free-range goat that Masha cares for, the men attack and kill the four-legged animal.

The women return to the resort building happy and relaxed, while the men triumphantly return sweaty and dirty while carrying the goat carcass with a desire for meat. Masha celebrates the men’s success, but privately is horrified by the slaughter of the innocent animal.

The goat is the featured meal with wine and joy all around. Toasts are given, and when Napoleon stands to offer his praise, he dives into the pain he has lived in for the last three years. He describes how he would always get up early to wake up his son Zach. On the morning of Zach’s death, Napoleon had ignored his alarm clock and slept in. He has blamed himself for the past three years, thinking that if only he had gotten up on time, he could have saved his son. The tears are flowing from this broken father when his wife Heather confronts Masha. She asks point blank if Masha has been medicating them. Masha only smiles cryptically at the group.