“Welcome to Earth,” Will Smith jokingly says as he punches an alien invaders from another world in Independence Day. Less jokingly, that iconic line has become a National Geographic exploration series featuring Will Smith as he goes on a dream adventure around the world with some of National Geographic’s most daring explorers. Four of them assembled at the TCA Summer Press Tour to share a first look at this new series, coming exclusively to Disney+. 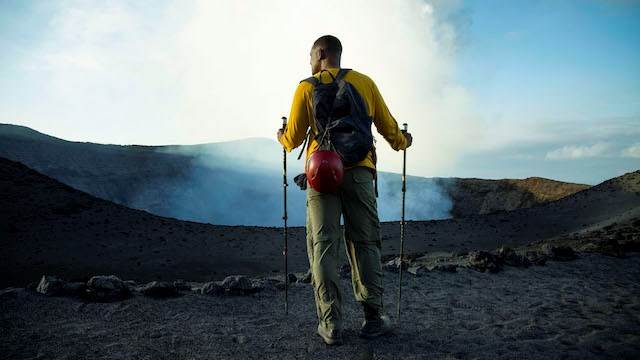 “This was 92 shoots, 34 countries, and it’s all about the hidden worlds that are all around us,” shared Jane Root, executive producer of Welcome to Earth for Nutopia, who partnered with Nat Geo on the project. “One of the great things that Will said in the making of this is how his grandmother had told him that the best things in life are on the other side of fear, and that’s exactly what he believes. He talks about how he never climbed a mountain, he’d never been in a cave, never slept in a tent, and he decided to do those things a few years ago.”

The explorer who leads Will Smith over mountains is mountaineer Erik Weihenmayer, who has scaled all seven summits of the world and became the first and only blind person to climb Mt. Everest. “We went to Vanuatu, which is this island chain, and we hiked up to this very active volcano, one of the most active volcanoes in the world,” Erik explained about his travels with Will. “We had a good safety crew around us, so we felt pretty safe. But it was wild because we were walking up this active volcano with these vents of rifle shots of these giant magna bombs that were shooting like half a mile into the sky. We were both about to repel down into that volcano to study the soundscape of the volcano, soit was definitely, let’s say, counterintuitive to be walking into the volcano versus running away from it.

As for the caves, engineer Albert Lin was the expert in the field, having spent years exploring the lost cities of the world with cutting edge technology. “We had to rappel 300 feet into this cave, high up in the central part of Namibia,” Albert explained. “And then go into this cobalt blue water, just the most stunning water you've ever seen and try and measure these stalactites.” The underwater cave had never been mapped and Will Smith joined Albert for this assignment, which had its share of dangers. At one point, Will almost descended too far, which would’ve been bad for Albert. “When I asked him how he overcame all his fears, he recounted that he used to go to work every summer with his father, who was an electrician dealing with high-power electricity. His dad taught him that if he let fear takeover, that it was deadly. So it was all about keeping calm and keeping in the moment, and then he turned that around and said let’s go again and that was, to me, one of those moments where he became much more than a movie star. He just became an awesome human.”

Having scaled mountains and mapped caves, Will Smith’s next adventure was to head to the bottom of the sea. “When I met him on land, there was this gregarious, charismatic guy, that guy you see on screen,” shared Diva Amon, a marine biologist who met Will Smith in the Bahamas. “Once we got into the sub and got hoisted over the side and started to descend into the depths of the Bahamas, down to a kilometer deep, it switched like a light, like a flipping of a switch. Will suddenly became very quiet and quite fearful, to be honest. And that's totally understandable, as something myself that I have gone through on some of my first sub dives.” However, once down in the depths of liquid space, deeper than rays of sunlight can travel, the Aladdin star became awestruck by a whole new world. “From seeing these staggering white cliffs and these incredible animals that he's never seen, and of course, this deep-sea firework display like nothing else on the planet… It just was an extraordinary journey for both of us.”

Polar Expeditionist Dwayne Fields may have been leading one of the biggest stars on earth through Iceland, but that didn’t mean he treated Will Smith differently from any other person. “I said ‘The great thing about here is everyone is on the exact same level,’” Dwayne recalled. Looking downstream of white water rapids in a basalt canyon would fill most people with some anxiety. “I could see Will look down and he just took a moment, took a breath, as if he just caught himself. And I don't know what he did in that moment, but there was no hesitation for him getting in that boat and getting on that water… He just took a breath, took a moment, and it was straight in the water.”

“I'll tell you one thing that Will said,” Jane Root added. “He said that there's literally nothing on Earth that has meant this much to him. He says it's beyond music, it's beyond movies, it's just that incredible spectacular thing.  And I think for him, that it's the other side of fear. It was a truly incredible thing. He really, really went there.”

You can see Will Smith travel around the world on incredible expeditions that only National Geographic can offer when Welcome to Earth premieres on Disney+.