Steve Martin and Martin Short are coming back to televisions with their upcoming series, Only Murders in the Building. In celebration of this, we look back at one of Steve Martin’s hidden gems from the Touchstone Pictures vault, Shopgirl. 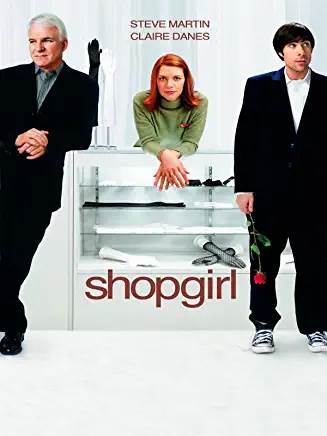 Mirabelle is a lonely glove salesperson at Saks Fifth Avenue in Los Angeles. A mountain of student debt is slowly but surely crushing her, while she stands at the glove booth of the famous store watching the world pass by.

Meeting Jeremy at the laundromat, she goes on a date with him that is less than spectacular. Though not willing to give up on the possibility of love, they have a second date that is even worse than their first. Jeremy leaves for a gig on the road, and Mirabelle is back to her booth at Saks.

A cryptic invite by a customer named Ray brings Mirabelle to dinner, where she meets the wealthy and single Ray Porter. A logician by trade, Ray and Mirabelle bond and a long-term relationship begins.

Ray is accustomed to no strings attached relationships. Thinking that he and Mirabelle are on the same page, they continue to see each other regularly. The problem is that Mirabelle is starting to develop feelings for Ray. Their relationship twists and turns with hurt feelings, but the two characters are truthful with each other, and the relationship ends.

Time passes and Mirabelle and Jeremey reconnect. The relationship she thought she had with Ray is found in the newly matured Jeremey. Mirabelle has left Saks for the art world, and with Jeremey, the two are happy and in love.

Having listened to the audio book, and loved every word written, I had some worry that the film would be a disappointment compared to the book. Thankfully, the movie was wonderful because of some outstanding performances from the three leads.

Claire Danes has one of the most difficult jobs in the movie. She must bring a vulnerability to Mirabelle, while not making her a pathetic helpless girl waiting to be swept off her feet. Danes brings so much strength to Mirabelle that you can’t help but route for her success. Mirabelle is living her best life. She’s not complaining about her small apartment or her boring job. We never hear her wish for something more. She is a strong determined woman who is content. This strength of character we see Danes brings to Mirabelle is what makes her relationship with Ray work, and not seem creepy.

No one else could play Ray Porter but Steve Martin. Martin is a hilarious comic, but here we get to see Steve Martin the actor, and what a revelation he is. Martin is charming as Ray, and how he plays the wealthy older man is a perfect match for Danes’ Mirabelle. It is easy to see how there relationship would blossom. These two are equal characters despite their age and gender gap. Some films that showcase the May-December relationship show a power imbalance between the two characters. Viewers won’t see that inequality between Danes and Martin. Danes brings a power to Mirabelle but it’s the subtlety to the character of Ray that allows Martin to play against his usual type and make the wealthy logician a down to earth character that viewers can connect with.

Jason Schwartzman spends most of the film on the road as a roadie for a band. He only gets a few scenes with Mirabelle and must make them count.

If you are looking for a zany Steve Martin performance Shopgirl isn’t for you.

Shopgirl gets 4 Golden Popcorn Buckets. The movie is an absolute delight with some talented performances by Claire Danes and Steve Martin. Not only are the performances outstanding, but the fact that Los Angeles is showcased for its beauty and depth as a backdrop is a bonus.

Next week we look back at Martin Short’s bank robber comedy Three Fugitives.