Behind the Attraction is back with five new episodes, and the first of the new batch invites us to take a look at those icons that have been so heavily associated not only with Disney Parks, but the Walt Disney Company as a whole, the Castles. 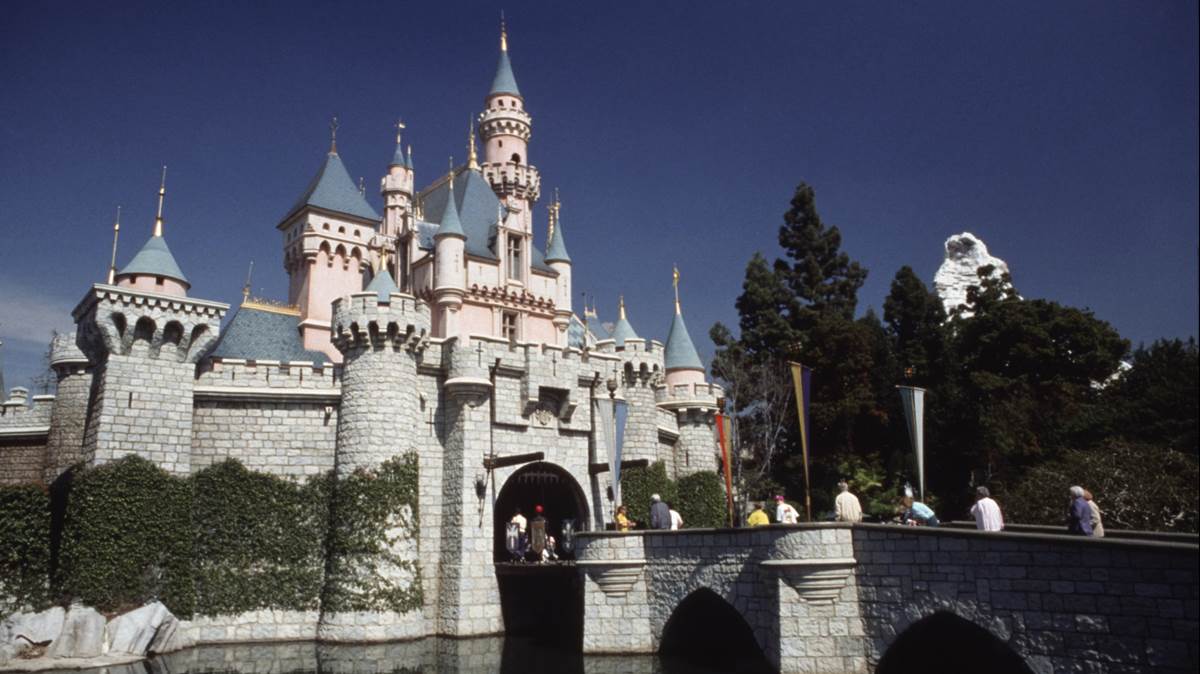 This episode of Behind the Attraction is all about the weenie. Which you’ll soon learn is the term given to park icons by Walt Disney himself, because it’s what you entice a guest with. You know, like you might entice a dog with a weenie.

The story is told in a linear fashion, because you know, history. And we first learn about the development of Sleeping Beauty Castle at Disneyland, and the origin of the castle as the icon for Disneyland. They go on to say that it might seem strange, considering now castles are so heavily associated with the Disney Parks and play one of the real highlights of the episode (for me!) nearly every castle opening seen in Walt Disney Pictures film openings in a rapidfire montage. Don’t worry, this is seen again later.

And how the decision was almost ultimately decided by the upcoming production of Sleeping Beauty. They also go on to explain that real castles are actually kind of dark and depressing so it really came down to reimagining them as though they were the fairy tale style, which has now basically become the norm.

Again, where this series struggles, is if you’re a regular fan, most of the anecdotes and stories that are shared are rather commonplace. A casual viewer will find them interesting, but if you’ve ever picked up any kind of Disneyland History book before, or seen history-based attractions like The First 50 Magical Years at Disneyland hosted by Steve Martin, you already know all the stories you’re about to hear. They mention Herb Ryman’s first rendering of Disneyland, mentioning it’s the most valuable piece in the history of the company, and also the story of the castle model when Ryman was playing with it and turned it the other way when Walt saw and said he liked it better that way.

We also hear about the opening of Disneyland and the bigger-than-expected crowds that day and how many people first went across the drawbridge that first day. 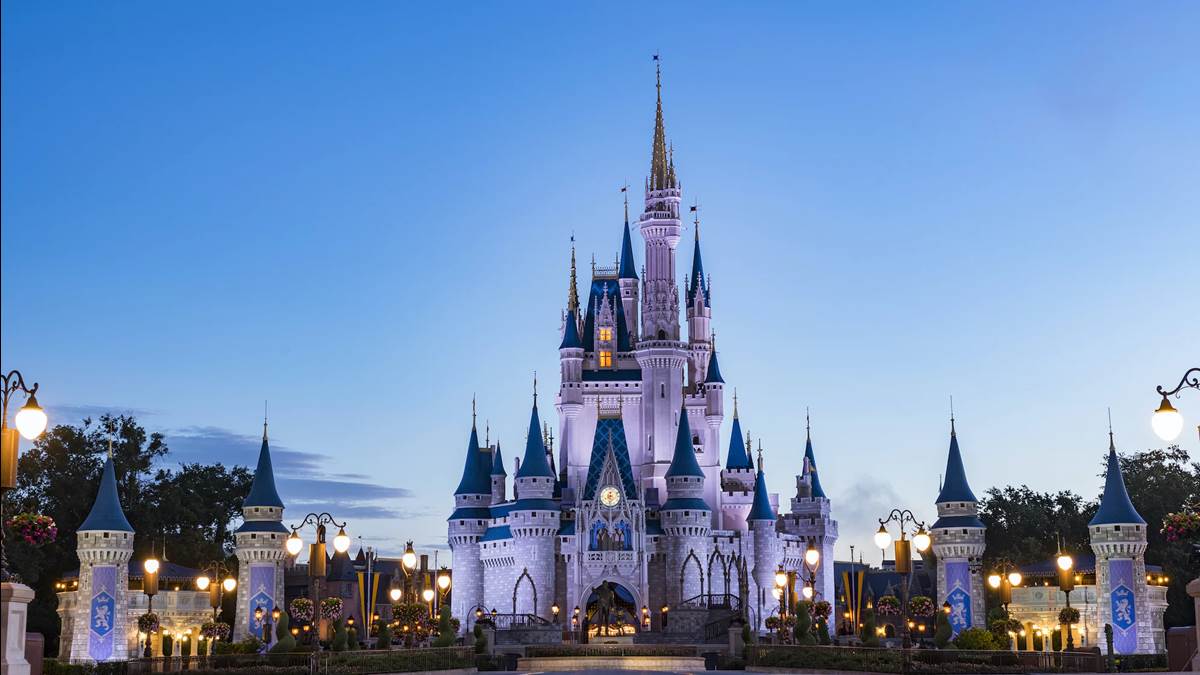 One recurring joke, which sadly they never really redeem themselves for saying, is the castle’s size. They just explain it away through budget and the opportunity to discuss the idea of “forced perspective,” a theatrical illusion where things are made to look bigger (or smaller in some cases) than they actually are. Using the size jokes as a jumping off point, we then cross over to Cinderella Castle at Walt Disney World, where Imagineer David Durham discusses a point that is only glazed over: In California, you can’t see the castle from everywhere in the park and maybe that’s a good thing. In Florida, that was not going to be the case. You would be able to see it from Tomorrowland. The episode goes on to explain that’s because in Walt Disney World’s Magic Kingdom, guests need to see that weenie from the parking lot over a mile away. Not much else is explained about the castle, other than it’s larger and can be seen for miles, and a quick glimpse into the invitation-only Cinderella Castle Suite.

We then jump over to the construction of Tokyo Disneyland, which again, is quickly explained that Tokyo executives wanted an exact copy of Walt Disney World’s Castle. At the same time, development of EPCOT was still in process, so simply, they said “sure” and did it that way.

What I was hoping this episode would get into, but didn’t, was the other icons of the parks, like Spaceship Earth at the aforementioned EPCOT. Yes, this episode is titled “The Castles” but we’ve seen past episodes like “Star Tours” veer off course and become “Anything Star Wars at a Disney Park.” They only mention Tokyo’s castle to transition into building parks overseas, which segues quite nicely into a longer bit of development about Euro Disney/Disneyland Paris’ Château de la Belle au Bois Dormant. They discuss the stained glass work, and how they had to differentiate themselves from the 45,000 castles in the country, mainly by taking inspiration from the art of Eyvind Earle. They also share fun details, including the escargot shells that adorn a turret, and most importantly for park fans, a visit to the castle’s unique dungeon where a dragon sleeps….lightly.

Next up in our timeline, Hong Kong Disneyland. Like Tokyo, they wanted Walt Disney World’s Cinderella Castle as well. Imagineer Doris Woodward simply said “no.” Instead, they got a copy of the original Sleeping Beauty Castle at Disneyland. The difference for this park is cultural, and that park is laid out using feng shui, with ocean in the front and mountains in the back for strength and power. Woodward explains that all the other castles face south simply for photos. Castles are always lit that way. Hong Kong Disneyland’s Castle faces east, with the sun setting behind the mountains behind it. 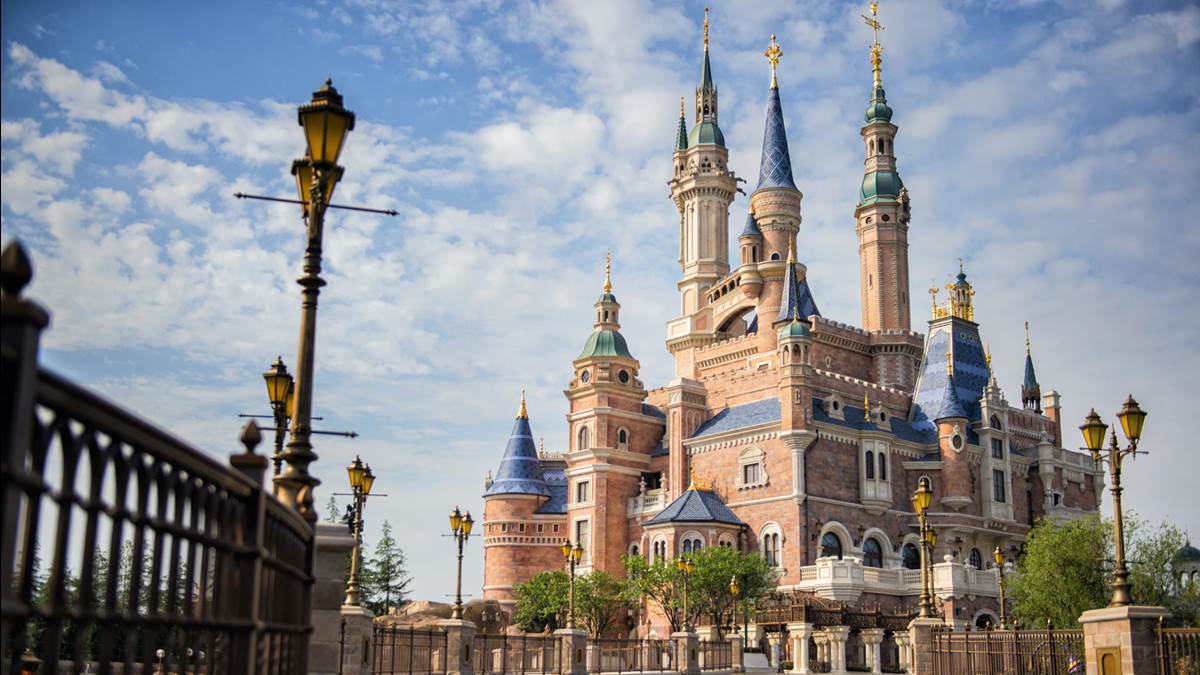 Then, it’s time to ramp up the size jokes again and discuss Shanghai Disneyland’s castle, comparing it to the original Disneyland and Walt Disney World differences. Making it substantially larger, but not just larger than Hong Kong’s but the largest in any Disney Park in the world. Woodward had put out an all-call for anyone from all over the company to submit ideas for castles. Enter Tangled production designer Doug Rogers, who submitted his designs and got an email from Woodward inviting him to the project. Imagineers said the castle should be an E-Ticket in itself, describing not only would there be a boat ride in the basement level, but a Bibbidi-Bobbidi-Boutique, a walk-through experience on another floor, meet and greets, and a 250 seat restaurant.

They also explain the color scheme and how it was designed, considering Shanghai is so full of pollution, they had to figure out how it would stand out.

But time to revisit Hong Kong, who needed its own castle. Something unique, and special. Rogers was pulled by Weis to take a look and rethink that park’s castle into its own house for all the Disney princesses. All the colors, everything princess would be in that castle, with then-CEO Bob Iger loving the idea.

We actually get a bit of an emotional moment too, shared by Rogers, about that email he got inviting him to the Shanghai project, inevitably sharing that he burst into tears at the thought of how happy his mom would be.

But what about Spaceship Earth, The Chinese Theater, Grizzly Peak? I guess there’s future episodes for those. I hope.

Behind The Attraction: The Castles is now streaming on Disney+.