Once again, Behind the Attraction uses a single attraction as an excuse to talk about several at once with the it’s a small world episode, which should be titled “The 1964-65 New York World’s Fair.” Only around the 14:00 mark of this episode of Behind the Attraction do we actually get into the story of it’s a small world. What fills up the first third of the episode? The history of the 1964-65 New York World’s Fair, which to be honest, is quite the story.

The episode takes us into the story of the fair, being developed by Robert Moses but dives into the background of Moses, sharing that he wanted to charge rent to country exhibits, have the fair last a year, and other decisions that caused traditional fair exhibitionists to run away from the project.

Moses turned to American Industry for fair exhibits, and with sponsors developing pavilions essentially to advertise their products. A problem when Walt Disney was approached to help develop shows for the fair. He wanted to bring cutting edge experiences to Disneyland, but didn’t have the money, and used the fair to develop the new technologies. One thing he had in mind from the get-go, a stage show featuring a robotic Abraham Lincoln, but one that couldn’t find a sponsor because, well, what would Abe Lincoln sell?

Deals were made, and other sponsors were seeking out help from Walt Disney, with both General Electric and Ford having the studio develop their shows and strain the resources at the studio to develop the Carousel of Progress and Magic Skyway. 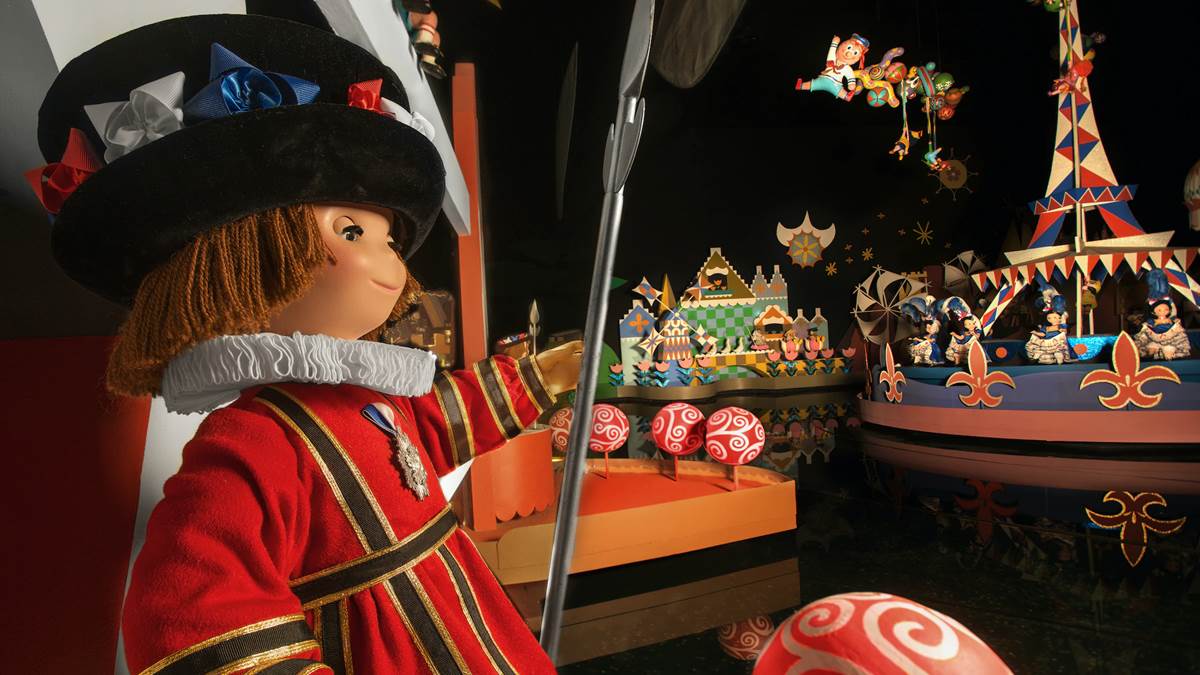 The episode finally starts hinting at a fourth attraction coming to the fair, one that was originally secretly rejected by someone at the studio speaking on behalf of Walt saying they wouldn’t be taking on another project. Until, Walt Disney ran into Joan Crawford at a party, who demanded to know why he said no to her company, Pepsi-Cola.

The editing of the series is definitely a highlight, and it truly shines in the sequence explaining how Joan Crawford was involved in the story of it’s a small world. Walt didn’t know the studio was approached to do another show, and he signed on immediately, developing a boat ride featuring the children of the world.

The series dives deeper into the development, mentioning the project almost went to Marc Davis, who showed Walt paper cut outs of children before immediately asking “What’s Mary Blair doing?” We then learn about Mary Blair and her style and influence on the attraction, showcasing her art that features children and stylized like something a child would see.

But aside from the look, the trademark of the attraction is, of course, the earworm of the song “it’s a small world” which resonates through the episode, but gets the spotlight when the Sherman Bros, who just came off writing “There’s a Great, Big, Beautiful Tomorrow” for the Carousel of Progress, describe where it came from, with Robert Sherman calling the original design (where all the different country anthems would play) a “cacophony.”

They decided to land on the same song for all the countries to sing, the one we all know today. But, as a Disney fan who loves his trivia, I was quite surprised that at no point did they mention that the song was originally going to be a ballad. Something that had been highly talked about in other specials and documentaries about Walt Disney or the attractions of the World’s Fair. The episode jumps to the reception of guests at the fair, saying they flocked to all the attractions, with it’s a small world being the most visited, then segues into the attractions “coming home” to Disneyland, but then uses the collection of attractions as a jumping off point to discuss the advancements of Audio-Animatronics technology up to today, including, you guessed it, Star Wars: Rise of the Resistance, Millennium Falcon Smugglers Run, and the Na’vi River Journey in Pandora: The World of Avatar.

But the sentimality is heavy as Imagineer Rolly Crump explains that Walt was dissatisfied with Mary Blair’s original new entrance for it's a small world, sending her back into retirement almost immediately with Rolly taking over but staying true to her designs, all while we see a Cast Member from Disneyland Paris perform the legendary tune while we see the attraction all around the globe.

Behind the Attraction: it’s a small world is now streaming on Disney+.