Is Sting a murderer? Is Oliver’s dog Winnie okay? What did the post-it note mean? These questions have haunted me since the premiere of Only Murders in the Building on Hulu. Titled “The Sting,” all of these questions can be checked off as answered in the show’s fourth episode. 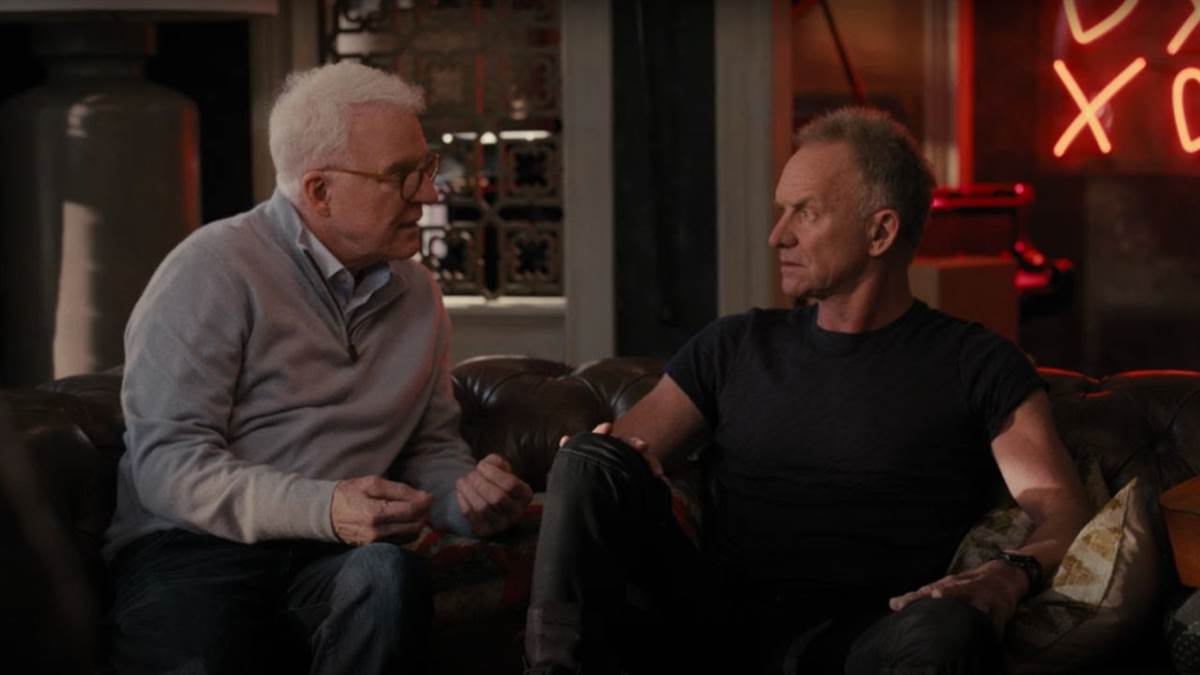 While listening to a new episode of “All is Not OK in Oklahoma,” we find the three co-hosts of “Only Murders in the Building” going about their daily lives in The Arconia. Charles (Steve Martin) is reviewing a box of things from Lucy while costumed characters of Bugs Bunny and Daffy Duck loom in the background. Oliver (Martin Short) answers the door for his veterinarian son Will, who is there to look at Winnie. Mabel (Selena Gomez) stands in her apartment looking at the Post-It note she found in one of Tim Kono’s books, the initials “G.M.” confusing her. Charles gets a text from Oliver that reads “The killer came for my family. Love, Oliver.”

Arriving at Oliver’s apartment, Charles and Mabel console their friend, who reveals that Winnie is recovering with his son, but that she will be alright. He shows them a note that was on his door that advised them all to stop the podcast and that he has a new theory about who it was. He starts recording their conversation as he tells them why he thinks it was “Musical superstar Sting.” Mabel jokingly asks if he’s the guy from U2 and as Charles and Oliver list off the artist’s accomplishments, she corrects them about “Every Breath You Take” being a love song, adding that it sounds like it was written by a killer. On her phone, Mabel finds a headline that Sting recently lost millions of dollars by the investment firm that Tim Kono worked for (in the previous episode, we learned that Tim lost his job for losing a client a lot of money). Charles holds the building manifest Oliver got from Ursula and notes that Sting was in the building the night of the murder and also didn’t evacuate when the fire alarm went off. Feeling in over their heads, Charles tells them he feels like they need the help of Cinda Canning (Tina Fey), the host of “All is Not OK in Oklahoma.”

Charles knocks on the door of his neighbor Arnav (Maulik Pancholy), who tells Charles that his wife was just on facetime with Lucy. Charles recalls that Arnav’s parents took a class with Cinda Canning and that they kept in touch, playing the guilt card to get Arnav to agree to connect them.

While leaving The Arconia to head to their meeting with Cinda Canning, Charles, Oliver, and Mabel are joined in the elevator by Jan (Amy Ryan), who wears a shirt that refers to bassoonists as sexy. She notices that Charles is dressed nicely and tells him he must be on his way to see a woman. Their conversation is flirty and as they get out of the elevator, Mabel and Oliver try to convince the reluctant Charles that he should ask her out on a date.

The trio stares in awe at the poster for “All is Not OK in Oklahoma” while waiting for their meeting with Cinda Canning. They gush over the podcast host when she enters, their meeting temporarily interrupted by a phone call during which she sells her podcast empire for $30 million. Oliver tries to hold back the juicy nugget they’re sitting on but ends up letting it slip that they’re investigating Sting as a potential murder suspect. She advises them on how to get a confession from a public figure, recounting a time she got a mayor to open up to her when she brought him a home-cooked turkey dinner. She also gives them a piece of advice that Charles is very impacted by: “Embrace the mess. That’s where the good stuff lives.”

Cut to Charles pinning up the words “Embrace the mess” on his planning board, turning around to see Bugs Bunny and Porky Pig staring at him from the couch. He is interrupted by the sound of Jan’s bassoon coming from his window and he looks across the garden at her window. He grabs his concertina and they begin to duet, changing songs between “If You’re Happy and You know It,” “Do Ya Think I’m Sexy?”, and “Take Me Out to the Ballgame.” When Charles doesn’t get a musical response from the last song, he looks down and notices that Jan has left her window. A knock at the door gets him up and a note slides under for Jan asking him to dinner.

Oliver and Mabel come to Charle’s apartment to brainstorm ideas for buttering up Sting to find that their friend is all dressed up for dinner (Charles once again sees Bugs and Porky staring at him as he prepares to leave). Charles blushes as Mabel and Oliver encourage him before his date, with Mabel calming his nerves by telling him to relax, flirt, and have fun.

During dinner with Jan, Charles learns that she took a class about body language and that he is naturally unthreatening, describing signs of untrustworthiness as including crossing your hands tightly. She opens up about her past, which includes being abandoned by her father and feeling second to her half-sister, who is to blame for her playing the bassoon instead of the flute. She also tells him about her ex, who never put her first. Expecting Charles to respond with his own open stories, Jan is disappointed when he not only tells him his relationship with his parents was fine, but that his last girlfriend was nice (he crosses his hands tightly while talking). Charles tries to change topics and when Jan calls him out on it, he refers to her stories as “Red flags” and tells her “Not everyone has baggage.” The waiter stops by to offer more wine and she tells him she’s good, ready to end the date.

Late that night, Oliver shows up at Charle’s door with a half-cooked turkey, telling him that his oven stopped working. He learned from Ursula that Sting has moved up his tour and will be leaving in just two days, with a planned renovation on his apartment while he’s away because he wants a “Fresh start.” Tomorrow morning will be their only option to surprise Sting with the turkey because Mabel is busy in the afternoon.

The trio arrive at Sting’s luxurious apartment the next morning and invite themselves in. Sting apologizes to Oliver for the way he spoke to his dog and Mabel cuts right to the chase, asking Sting if he knew Tim Kono. Sting reveals that he didn’t know Tim personally, but that Tim worked for him and had to fire him. Sting begins to confess to being responsible for Tim’s death when his assistant tries to stop him. He confesses to yelling at Tim the day he fired him, telling the young investment manager that he should kill himself. The performer is relieved when they tell him that Tim didn’t commit suicide but was murdered, revealing that he moved up his tour to clear his conscience. Sting begins to write a song on the spot about how he didn’t kill Tim Kono as the assistant asks Charles, Oliver, and Mabel to leave.

Charles knocks on Jan’s door and when she answers, he opens up about his last relationship. It lasted six years and was with a woman named Emma, who had a daughter named Lucy, to who he felt like a father. For their sixth anniversary, he booked a Caribbean cruise, but Emma was upset that it was a family cruise instead of a romantic one. While at a port of call, Emma and Lucy flew home and abandoned Charles, who paid extra for Bugs Bunny and Porky Pig to sit at their table on the night of their anniversary (which is why he is haunted by them now). Charles hasn’t spoken to Lucy since and is embarrassed by the situation, but tells Jan in the hopes that she will honor him with a second date. She agrees, joking that if he ever wants animal suits, it better be the two of them wearing them.

Mabel sits on her bed and looks down at one of Tim’s old copies of The Hardy Boys, a novel called “The Shore Road Mystery” that reminds her of something. She quickly searches the title on her laptop and finds that the story concerned a character named Gus Montrose. She searches that name in connection with Tim Kono’s and gets nothing back, but then searches for “Gus Montrose Gems” and gets back a jewelry company called “Montrose Gems.” She looks back at the Post-It, believing she just cracked what “G.M.” stands for.

Charles arrives at Oliver’s apartment, exhausted but ecstatic to have a second date with Jan. While they talk, Will brings Winnie back and tells his dad that he listened to the podcast. He was surprised to hear Mabel Mora on it and they ask why. Will remembers her from growing up in The Arconia, telling them that she was good friends with Tim Kono. He also remembers that the last time he saw her was when another one of her friends died from being pushed off the roof (Zoe). “That girl is bad news,” Will tells them as Oliver holds up a mic and asks his son to repeat that.

Mabel leaves The Arconia dressed in her yellow fuzzy jacket. As she walks down the street, we see someone following her from the back wearing a black jacket, a tie-dye hood covering their head underneath.

Cinda Canning is at her desk recording her podcast, revealing to her listeners that her next series will be about the actor famous for playing detective Brazzos, now believed to be a killer. She unveils the title of this new series: “Only Murderers in the Building.”

Only Murders in the Building will return on Tuesday, September 14th with “Twist.”